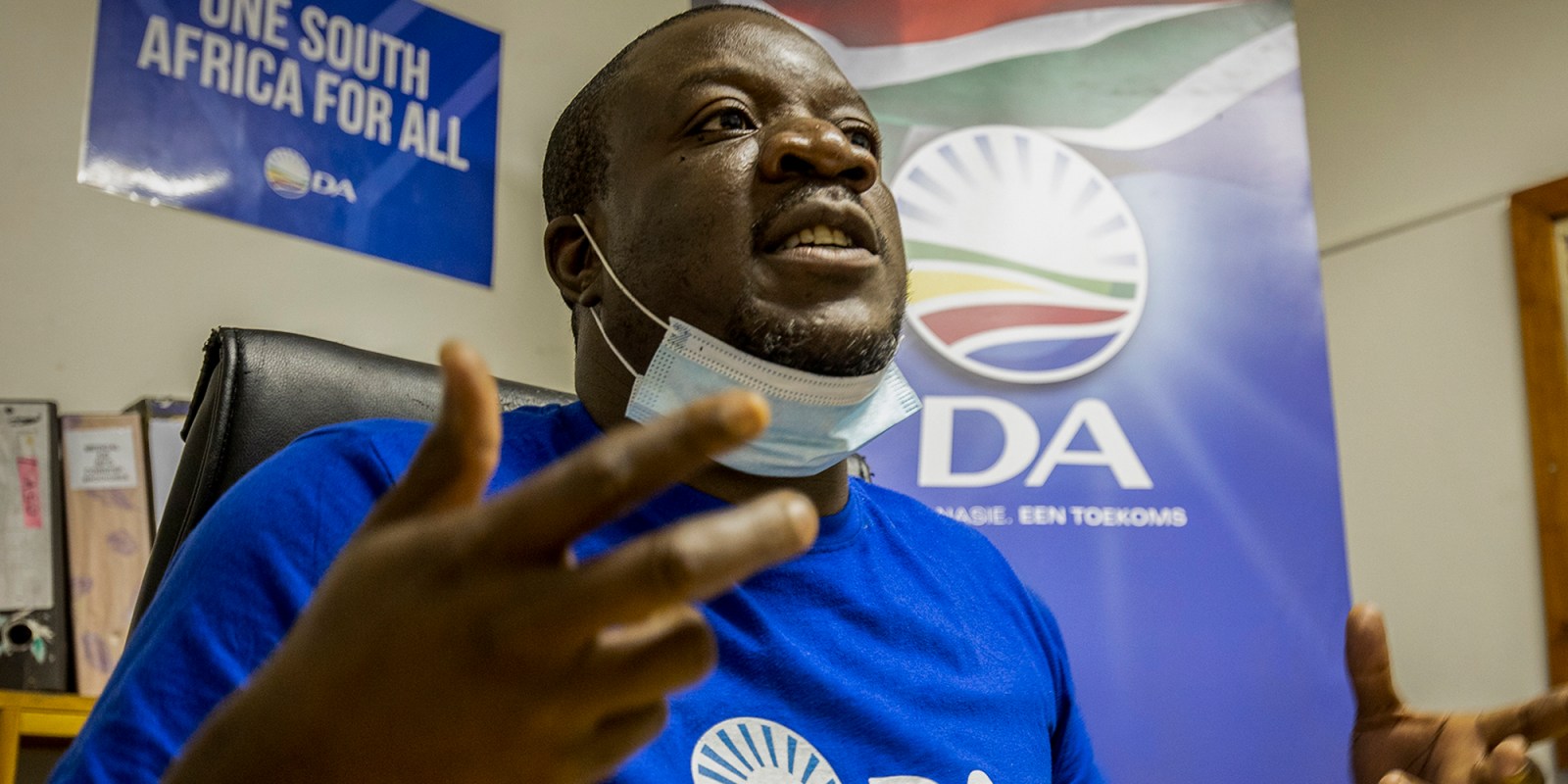 Former EFF member Cyril Chuene joined the DA at a time most black public representatives in the party seemed to be resigning. He speaks to Daily Maverick about his dramatic crossover and his hopes as a DA candidate in the Mbombela Municipality in the upcoming 2021 local elections.

“I used to champion land invasions,” he says in an interview at the DA’s tiny constituency office at the Canary Walk Centre mall in Mbombela. Back then, he was a staunch EFF member and, before that, he was a senior project coordinator in the provincial department of land affairs.

In 2009 he was arrested for allegedly soliciting a R10,000 bribe from a couple to ensure that a supposed land claim against their property went nowhere, but he said he was acquitted the next year and the allegations were the result of infighting in the province.

“Land invasion is unlawful. We know it is unlawful, but it shows you that people don’t have a place to stay, and it’s the responsibility of the municipality [to give them some]. There is lots of municipal land lying fallow in the municipality,” he says. “I don’t know when [last] they started a new township establishment.”

Land, and not political position, is the reason he says he jumped ship to the DA with months to go to the 1 November local government elections. About 200 other EFF members followed suit, although it’s not clear what their reasons were. Chuene doesn’t speak for them.

“The EFF says the state must be the sole custodian of the land. That’s where I differ. If you want to redress the past, you have to give it back to the people,” he says. “The state doesn’t have the capacity. It will perpetuate corruption to its last degree.”

The DA recently opposed an attempt in Parliament to amend section 25 of the Constitution to allow for land expropriation without compensation.

Chuene said he “studied the DA” and has directed his energy into helping the party campaign in places like ward 18 in Mbombela, his home ward. The ANC still has strong support there, with over 70% of the votes in 2016. Service delivery failures and infighting in the ANC could eat into the party’s support, and the opposition is campaigning hard there.

Chuene says even though President Cyril Ramaphosa campaigned in Tekwane South, in ward 18, over the weekend, about 200 DA supporters came to register at the voting station he was at.

The path to the registration point was soggy with sewerage, he says, and people had to step around it very carefully. Ramaphosa, however, never showed up at the voter registration centre as Chuene had hoped he would.

The ANC wasn’t an option for him, Chuene says. “The ANC is eating each other every day. It’s not going to work for me. They’re running on corruption. They’re just swimming on corruption,” he says. “One of the things the DA is very clear on, is transparent and corruption-free government. Let the current land reform programme continue, let’s just speed it up.”

He says he didn’t leave the EFF because it was his “enemy”, but because of principle disagreements. “I didn’t fight with anyone, I’m not blaming the EFF. There is no bad blood.”

Chuene’s political career started in student politics in the SA Students Congress in Limpopo. He joined the newly-formed EFF just after the 2014 elections. “I thought they will take us somewhere,” he said.

He started as a branch chair in ward 38 and from there moved into the provincial leadership and became provincial organiser, handling media and communications. After that, he headed the party’s elections machinery in two elections: the 2016 local government elections and the 2019 general elections.

Chuene, a close friend of provincial EFF provincial chair Collen Sedibe, was placed last on the EFF’s list for the legislature in 2019, reported 013News after indicating his ambition the year before to fill a vacancy there — also with no success. He previously contested for a position in the EFF’s provincial top five leadership, but threw his weight behind the wrong faction and didn’t make it there either.

Sedibe said Chuene’s crossing to the DA “is no big loss and we are not worried at all. It is not for the first time people [are] leaving the EFF and it is not the last time, but we are growing every day because we are hard at work and people have begun to see the EFF as their saviour and last hope.”

He said despite an exodus of 300 members — including a Member of the Provincial Legislature — the party was growing and overtook the DA in the province.

DA provincial leader Jane Sithole said Chuene started his journey with the DA in 2020 and “has gone through the DA’s rigorous candidate selection process”. He joined the party because “he believes in non-racialism, the rule of law and a market economy”, she said.

Mpumalanga is one of the ANC’s strongholds but people have been receiving the opposition well because they “are tired of not getting the service they have been promised”, Chuene says.

He says: “We are taking advantage of that especially in Mbombela. We are stepping in in a historically ANC ward. People are receiving us well. They understand what we are trying to do. You will see a massive change in election results. We have penetrated all wards that are an ANC target.”

He says people are starting to see reason in voting for the DA. “They have given the ANC too much time.” The opposition party has put up candidates in every ward in the country, and even if they get a few votes, that would be a start.

The ANC had 76% of the vote in 2016 but failed to register in 16 wards in Mbombela ahead of the initial August 23 deadline. There was a chance to rectify this, but the infighting in those wards indicate weaknesses in the ANC that the opposition hopes could result in a hung council.

Even so, the opposition will likely have to work together to keep the ANC out of government. Chuene refuses to say if he could be key in negotiating a cooperation agreement between the ANC and the EFF. It’s something better left for “higher up”, he says.

Given what happened in the City of Johannesburg, where voters have punished the DA for working with the EFF, this is unlikely.

Why did Chuene join the DA at a time when most black public representatives in the party seem to be resigning? Since Helen Zille returned to the top leadership and party leader Mmusi Maimane handed in his resignation, people like Phumzile van Damme, Herman Mashaba and John Moodey have left.

“I hear everyone saying it’s a white party,” he says. “Jane [Sithole] is not white. James Masango [deputy chairperson of the DA’s federal council] is not white. So what does white mean?”

Chuene says his role in the DA is “to make [people] understand that this is for all of us, and that we can drive a better South Africa. The ANC is dying a natural death.” DM