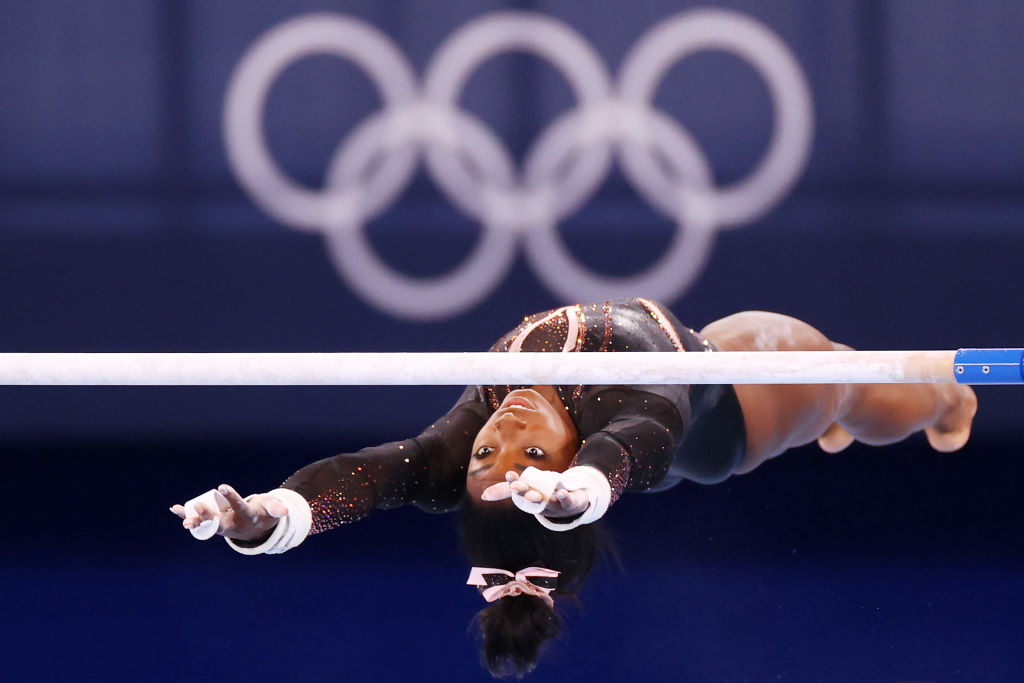 Simone Biles trains on uneven bars in the run-up to the Tokyo Olympic Games at the Ariake Gymnastics Centre on 22 July 2021. (Photo: Laurence Griffiths/Getty Images)

Four-times Olympic gold medallist Simone Biles told New York Magazine she should have quit gymnastics ‘way before Tokyo’, where she suffered from a case of the ‘twisties’ that derailed her attempt at a record haul of six golds.

The 24-year-old American dropped out of the opening event at the Summer Games, the team competition in July, after just one vault and later said she was struggling with the “twisties”, a serious mental block in which gymnasts lose their sense of orientation.

In an interview released on Monday, Biles told the publication she struggled with anxiety after arriving in Tokyo.

“If you looked at everything I’ve gone through for the past seven years, I should have never made another Olympic team,” said Biles, citing the time former Team USA doctor Larry Nassar spent in the media before he was given two prison sentences of 40 to 125 years and 40 to 175 years for molesting gymnasts.

“I should have quit way before Tokyo.”

The 19-time world championship title holder told legislators earlier this month how the FBI and US gymnastic and Olympic officials failed to stop the sexual abuse that she and hundreds of other athletes suffered at the hands of Nassar.

The US Olympic and Paralympic Committee (USOPC) said last week it is dedicated to making sure the joint settlement agreement reached between the organisation, USA Gymnastics and survivors of the Nassar sex abuse scandal succeeds.

USA Gymnastics and victims of the former national team doctor filed a joint $425-million settlement proposal three weeks ago that needs to be approved by survivors and insurers in order for it to move forward as a full settlement.

USOPC chairperson Susanne Lyons said none of the parties involved in the mediation process is allowed to provide details but made it clear where her organisation stands.

“I can just promise you that we are dedicated to helping it succeed so that these survivors can achieve (legal) closure. So, I really can’t say a whole lot more about that,” Lyons said.

“The insurance companies are engaged in the conversation, as are we, and we’ll see how that goes.”

Lyons was speaking nine days after Biles, alongside fellow gymnasts McKayla Maroney, Aly Raisman and Maggie Nichols, told legislators the FBI and US gymnastic and Olympic officials failed to stop the abuse she and hundreds of other athletes suffered from Nassar.

“It’s always very difficult to hear and relive the survivors’ pain, and we all very much were interested in hearing what was said at that hearing last week,” said Lyons.

“We still have tremendous empathy and support for the survivors of the Nassar situation; as you know the mediation continues in trying to reach a settlement.

“We are very much a part of that and very eager to get to closure on that so that these athletes can have some closure and move on with their lives.”

Nassar, who is also a former employee of Michigan State University, has been found guilty in three separate cases, with one of the prison sentences running up to 175 years.

The USOPC hired a law firm to conduct an independent investigation and has since implemented reforms, including new leadership and stronger accountability measures in an effort to create a culture free from abuse.

“It’s understandable that athletes would have anger towards the entire system that they believe failed them,” said Lyons.

“We believe that we’ve taken very significant measures over the last three years to try to address athlete safety and to ensure that something like this could ever happen again.” DM/Reuters