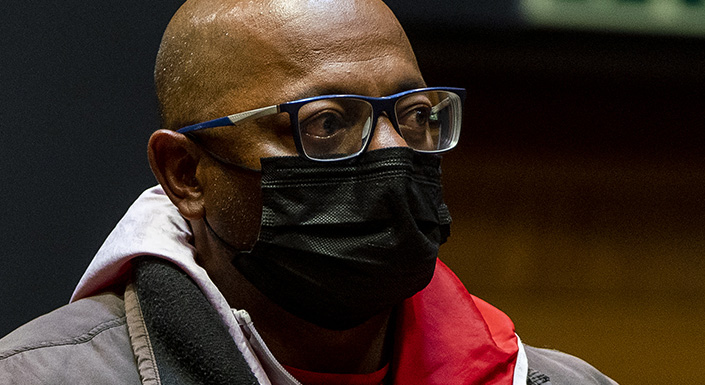 Kuben Moodley during his bail application hearing in the Palm Ridge Specialised Crimes Court on Wednesday. Moodley was nabbed at OR Tambo International Airport as he was about to catch a flight to Dubai. (Photo: Shiraaz Mohamed)

Kuben Moodley’s arrest is one of the most significant from the State Capture docket so far because he has been a vital cog in lucrative deals involving Transnet and the Gupta enterprise as well as Regiments Capital and its offshoot, Trillian Capital Partners.

The Johannesburg businessman was arrested at OR Tambo International Airport shortly before he was scheduled to board a flight to Dubai.

Moodley is currently appearing in the Palm Ridge Specialised Crimes Court where a bail application is under way.

His arrest is likely to have triggered major unease among those associated with various questionable transactions involving Transnet, Regiments Capital or its offshoot, Trillian Capital Partners.

Moodley is among several individuals under investigation over allegations involving theft, fraud, corruption and money laundering relating to deals at Transnet and one of its pension funds.

The ongoing criminal investigation that led to Moodley’s arrest covers, among other things, Transnet’s 1064 locomotive acquisition contract and one involving the Transnet Second Defined Benefit Fund.

Authorities have previously named him as allegedly having been central to a 2012 meeting that is widely regarded as the genesis of the Gupta foray into state-owned companies.

It is said that the meeting, allegedly also attended by Regiments Capital’s Niven Pillay and Gupta kingpin Salim Essa, thrashed out the workings of an alleged kickback arrangement, sometimes described as business development fees, for deals at Transnet and the pension fund.

The meeting came up extensively during the testimony of Standard Bank’s former group legal counsel, Ian Sinton, at the Zondo Commission in 2019.

Sinton was testifying about why the bank had decided to terminate the accounts of Regiments Capital a few years ago.

Moodley has managed to keep a relatively low profile in recent years. His arrest comes within four months of that of former Gupta associate Iqbal Sharma. Sharma, who is being prosecuted in connection with a R24.9-million case involving the Free State government, is currently out on bail of R500,000.

In  2019, Moodley had a run-in with the State Capture Commission after investigators had accessed his “extra extra large” safety deposit boxes at Knox Vaults in Killarney, Johannesburg.

The Zondo Commission eventually released his belongings but then Hermione Cronje’s team pounced to restrain R232-million in assets belonging to Moodley.

Moodley was granted bail of R150 000 and the case was postponed to February 28 2022. He was ordered to hand in his passport and has to report to the Sandton police station twice a week. The State confirms that he faces charges of fraud, theft and money laundering of more than R300-m both in his personal capacity and as a director of Albatime Pty Ltd. He also faces charges for allegedly allowing Albatime’s bank account to be used to launder cash to entities owned by the Gupta family.