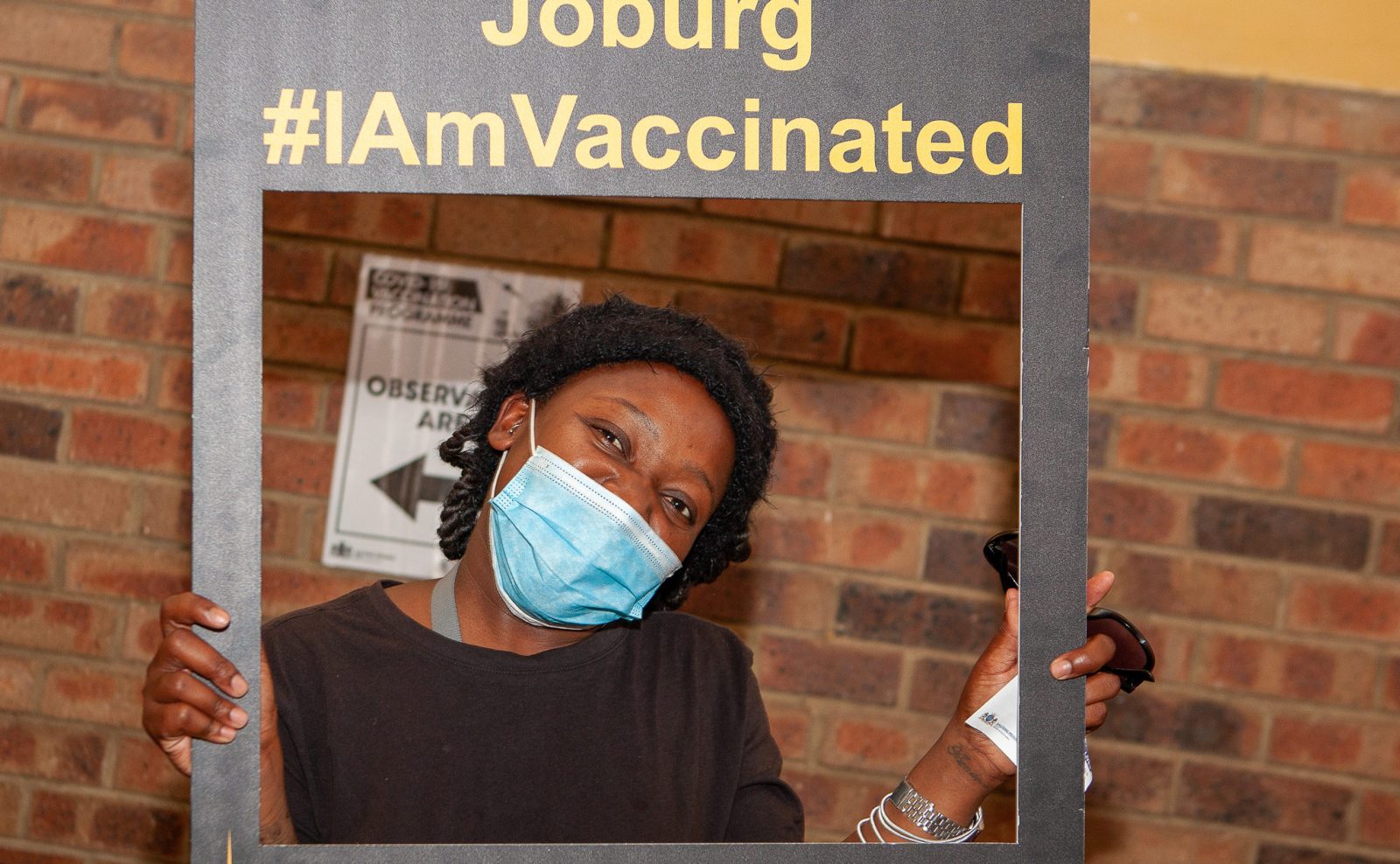 A resident after receiving the Covid-19 vaccine at the Naledi vaccination site on 28 September 2021 in Soweto, South Africa. (Photo: Gallo Images / Papi Morake) 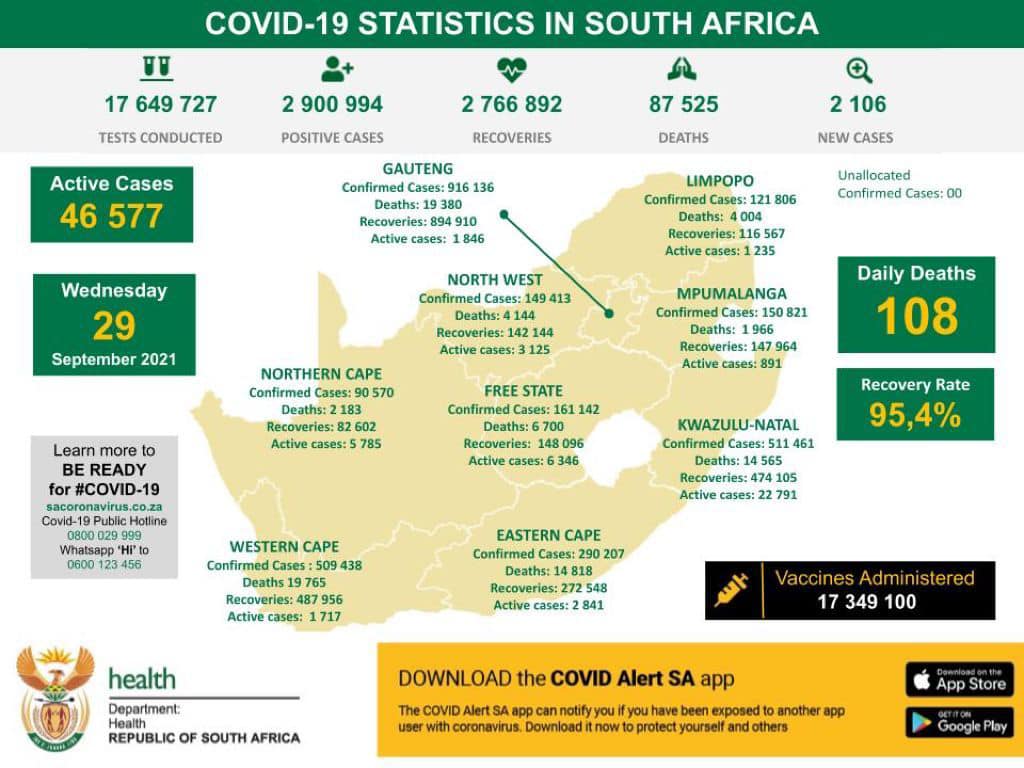 The US recovery from the latest Covid-19 wave is taking hold, with cases dropping or poised to start falling in the vast majority of states. The Food and Drug Administration is leaning toward authorising half-dose booster shots of the Moderna vaccine.

An antiviral drug from Merck & Co. appears to inhibit several major Covid variants, including the highly contagious Delta strain, according to early stage data. YouTube will begin removing content questioning any approved vaccine, not just those for Covid-19.

Daily infections rose to a record in Singapore, where the spread of the virus despite a high vaccination rate is sowing a rare disquiet in the ruling party.  Russian President Vladimir Putin is ending his self-isolation following exposure during an outbreak among his staff earlier this month.

Transport and health ministers of the G7 countries are due to meet virtually on Thursday to discuss ways to restart international travel, according to people familiar with the matter.

The meeting is being organised by the UK, which holds the presidency of the Group of Seven nations this year, said the people, who asked not to be identified ahead of any official statement. It is aimed at moving closer to a consensus on how to ease border restrictions, they said.

The New York Hilton, shuttered by a pandemic that grounded business travellers and kept tourists at home, is scheduled to come back online on October 4, according to a representative for Hilton Worldwide Holdings.

The hotel, on Sixth Avenue between 53rd and 54th streets, is exactly the type of property that has been battered by the pandemic. With nearly 1,900 rooms, it’s a staple of conferences and business events, which ground to a halt in March 2020 and have been slow to return amid the rise of the Delta variant.

“This is a war that we’re involved in,” Fauci said on MSNBC. “And masks and vaccines – they are the weapons that we use to fight this war.”

The US Centers for Disease Control and Prevention urged pregnant women to get vaccinated against Covid-19, saying the benefits of vaccination outweigh any potential risks.

The agency had already recommended vaccination, but on Wednesday it issued an “urgent health advisory” and cited low levels of immunisation among pregnant populations. Only 31% of pregnant women have been vaccinated, with lower rates among Hispanic and black people.

About 161 pregnant women have died from Covid-19 in the US, including 22 in August alone, the agency said. Pregnancy increases the risk of worse outcomes from Covid, and the virus raises the risk of adverse pregnancy outcomes like preterm birth and stillbirth.

“I strongly encourage those who are pregnant or considering pregnancy to talk with their healthcare provider about the protective benefits of the Covid-19 vaccine to keep their babies and themselves safe,” CDC Director Rochelle Walensky said in a statement.

Outreach workers who have helped Covid-affected individuals and families with food, access to medical care and quarantining in hotels will form the basis of an ongoing outreach programme to improve access to medical care for people in the city’s minority and immigrant communities that were hit hardest during the pandemic, De Blasio said.

The corps will hire 500 workers by the end of December who will work with community organisations in identifying neighborhoods and households that need help, said Health Commissioner Dave Chokshi.

The city will also create a permanent $20-million Pandemic Response Institute with Columbia University, to study and be prepared for future outbreaks of infectious diseases, De Blasio said.

Qatar eased its mask mandate, allowing people to be maskless in open public spaces except for hospitals, schools and mosques. It has also asked those who work in open spaces to remain masked during working hours. The Gulf nation, which is set to host the World Cup next year, has maintained a capacity limit in most places.

New York Mayor Bill de Blasio made an appeal to Brooklyn Nets star Kyrie Irving to get vaccinated after the basketball player dodged questions about whether he’d be able to comply with the city’s vaccine mandates at sports arenas.

“His fans are going to say ‘come on, join us, help us,’ ” De Blasio said on a Wednesday appearance on CNN.

De Blasio said he didn’t believe the Nets should make any exceptions for Irving, who must be vaccinated to play at the Nets home arena. He said the reason why the city was pushing so hard on widespread vaccine mandates for sports and other cultural venues, healthcare workers and teachers is because the requirements are working to boost vaccine rates. He said 45% more doses have been administered since the first mandates were issued in July.

YouTube will begin removing content questioning any approved vaccine, not just those for Covid-19, a departure from the video site’s historically hands-off approach.

The division of Alphabet’s Google announced on Wednesday that it will extend its policy against misinformation to cover all vaccines that health authorities consider effective. A year ago, YouTube banned certain videos critical of Covid-19 vaccines. The company said it has since pulled more than 130,000 videos for violating that rule. But many got around the rule by making dubious claims about vaccines without mentioning Covid-19.

Merck & Co.’s Covid-19 antiviral drug, molnupiravir, appears to inhibit several major variants of the virus, including the highly contagious Delta strain, according to early stage data presented by the company at an infectious disease conference.

The findings came out of laboratory research pitting the experimental drug against the variants in cell culture. Further research may be needed to confirm the results in human testing.

Romania’s two largest cities are gearing up for new restrictions, including a night-time curfew, after a surge of cases across eastern Europe over the past two weeks.

With the infection rate exceeding six cases per 1,000 people in Bucharest and Cluj-Napoca and reports of hospitals filling with coronavirus patients again, authorities are also preparing to tie access to restaurants to vaccination status and ban large events. Schools may be closed on a case-by-case basis as the government tries to limit online schooling because of worsening exam results last year.

Russia’s president is ending his self-isolation following exposure to Covid-19 during an outbreak among his staff earlier this month, Kremlin spokesman Dmitry Peskov said on Wednesday.

Vladimir Putin will meet in the Black Sea resort of Sochi with Turkish President Recep Tayyip Erdogan later in the day, Peskov said, his first such in-person meeting since his self-isolation was announced on September 14.

The 68-year-old Russian leader showed no public sign of illness in the two weeks since then, conducting his regular schedule of meetings via video links. Putin said he took his country’s Sputnik V vaccine earlier this year. DM