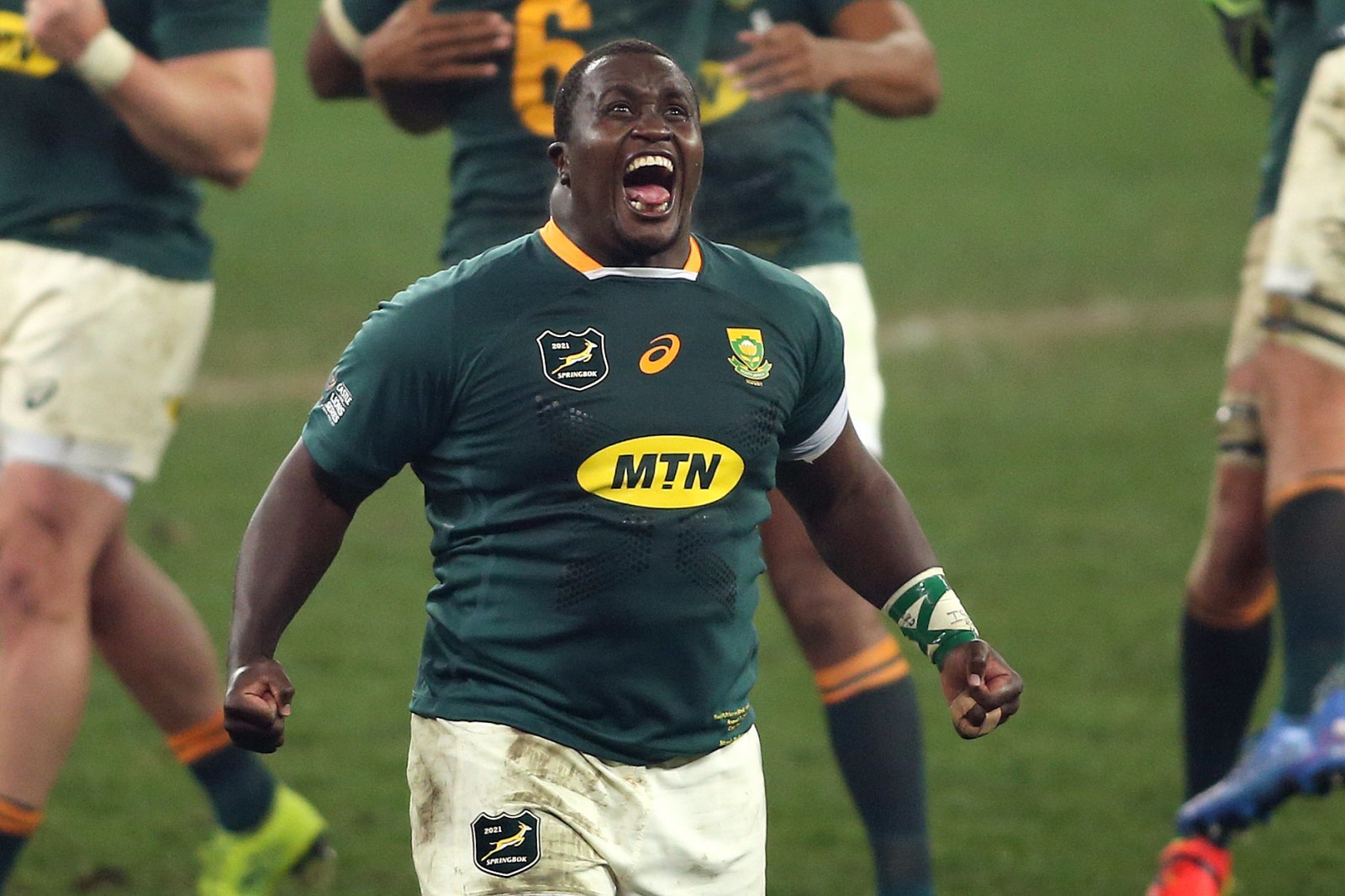 Trevor Nyakane of South Africa celebrates as South Africa beat British & Irish Lions 19-16 to win the Castle Lager Lions Series 2-1 at FNB Stadium on August 7, 2021 in Johannesburg, South Africa. Nyakane will start in place of injured Frans Malherbe when the Boks clash with the All Blacks. (Photo by MB Media/Getty Images)

A record number of seven black African players will start for the Springboks as they try to salvage their fast-declining season with victory over the All Blacks on Saturday.

It’s a positive sign of how transformed and multiracial the Springbok team has been in the Jacques Nienaber/Rassie Erasmus era that a major milestone went almost unnoticed.

When Nienaber named his team on Tuesday morning (SA time) from Brisbane, attention immediately turned to the retention of under pressure halfbacks Handre Pollard and Faf de Klerk, which is fair.

Both players’ form has been patchy in recent weeks and from a purely rugby playing perspective that warranted scrutiny.

But the selection of seven black African players is significant in itself, underlining that the sport is transforming and winning, recent results notwithstanding. Half the pack that will start against New Zealand is black, which is also a positive sign.

Transformation is hardly mentioned in the Springbok context anymore because it’s such an organic and natural part of the set-up. After years of ‘gentlemen’s agreements’ and ‘two black wings’ syndrome, Nienaber and co have moved way beyond those petty perimeters.

The Boks have beaten the British & Irish Lions this year and won their opening two matches of the Rugby Championship against Argentina. They came unstuck twice against the Wallabies in Queensland and lost a thriller, 19-17 against the All Blacks in Townsville last weekend.

Ox Nche has been called in to start at loosehead prop with Trevor Nyakane moving to the tighthead to cover for the injured Frans Malherbe. They join hooker Bongi Mbonambi in the front row.

“This front row started the first Test against the British & Irish Lions but Ox suffered a neck injury in that game,” Nienaber said. “That set him back a bit, but we are excited to have him back in the mix. We have a lot of confidence in him.”

That is the only change to the starting lineup with loose forward Jasper Wiese coming onto the bench in place of the injured Marco van Staden. Star wing Cheslin Kolbe will miss a fourth consecutive match after a leg injury he sustained in training at the beginning of the Australian tour, flared up in training this week.

“We made a big step-up in terms of our performance last week and having reviewed the match, there is no doubt we delivered a performance worthy of a victory,” said Nienaber.

“With that in mind we opted for continuity in our team, so the only change in the run-on side is Ox taking over in the front row after Frans was ruled out.

“Trevor is a seasoned campaigner who is equally comfortable at loosehead and tighthead prop, and Ox is a strong scrummager, so we are looking forward to seeing what they can do in the scrums.

“On the bench, Jasper takes over from Marco, and we are fortunate in that they are similar in terms of their physicality and strong ball-carrying abilities.”

Pollard and De Klerk have been the target of some criticism this week after both launched aimless kicks in last week’s contest that could have cost the Boks the match.

“One of our strategic goals is to create squad depth but another is to win,” Nienaber said “So when we are playing No 1 against No 2 in the world, it’s not really the time for experimentation.

“We also missed a whole season in 2020 because of Covid and I feel that as a team we need to get back to the standard we set in 2019. We are still building towards that, so this week it’s about playing our best possible team that is available.”

Even though the team is on a three-match losing streak, Nienaber said that he would not move away from the Boks’ aerial kicking game.

“We could have managed the back ends of both the first Australia Test (which the Boks lost 28-26 to the last kick of the game) and last week’s Test against the All Blacks a little better.

“Maybe we could have made some better substitutions and brought energy a bit earlier. But in terms of changing our strategy, it all depends on what New Zealand does.

“If they give us space in a different area of the field, then we will take it. But if they load the front line with 14 defenders with only one at the back, then obviously the space will be behind. It will come down to our ability to adapt to the picture they present to us.

“You have to attack space with what you feel is good for your team and what’s in our DNA. Yes, we have lost three games on the trot but two of those games were in a position to win them at the very end.”

In another twist to the plot, all teams, including Australia and Argentina, who meet on the same bill in Gold Coast this Saturday, were ordered to stay in their hotels after a Covid outbreak in Brisbane.

New Zealand, South Africa, Argentina and hosts Australia are allowed to continue training outside their hotels at closed sessions but cannot mix with the public, All Blacks assistant coach Scott McLeod confirmed.

“We’re not allowed out of the hotel except for essentials or medical visits,” defence coach McLeod told reporters in a video call from the team’s Gold Coast hotel.

“It’s something that’s unexpected but we’ve had it before and dealt with it really quickly.”

The northeast state of Queensland, of which Brisbane is the capital, reported four new Covid-19 cases on Tuesday, including its first case in almost two months. The source of the infection is unclear.

Queensland Chief Health Officer Jeannette Young said officials could order a lockdown if more cases emerge over the next couple of days.

The outbreak has placed a number of local sporting events in doubt, with the Sheffield Shield cricket match between Queensland and Tasmania in Brisbane called off just before the toss on Tuesday.

“I haven’t seen anything or heard anything official,” Nienaber said. “We were just at dinner when somebody said they had seen that update in the news. But I don’t know what the facts are around that. I’m not sure.”