President Cyril Ramaphosa arrives for a community meeting at the CC Sports Ground in Soweto on 18 September 2021, ahead of the 1 November local government elections (Photo: Gallo Images/Papi Morake)

At the municipal level, the state has completely failed South Africans.

This province is where the party is likely to face a tough battle in the 1 November poll, for which 26.2 million South Africans have registered to vote.

Rand Water blamed it on an Eskom power station meltdown, and Eskom counter-blames these enduring power and water cuts on cable theft or illegal connections. Either way, it showed how local government has failed from rural town to metro, from district to municipality and across all provinces the ANC governs – eight of nine.

Auditor-General Tsakani Maluleke’s municipal audit has found that only 27 of the country’s 257 municipalities made a clean audit. This is not only an accounting function but also tells you about the state of local government. 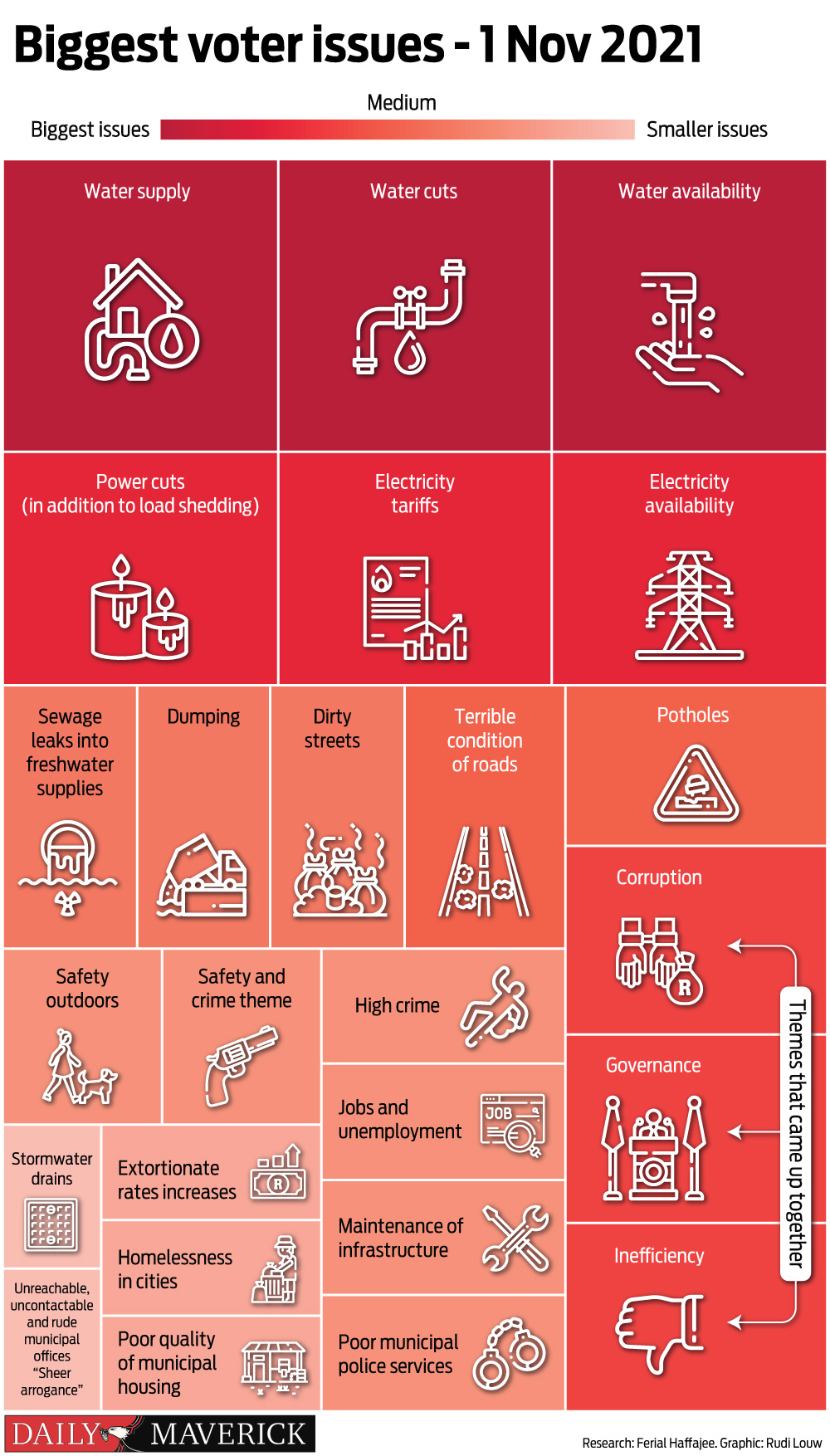 This graphic from the top-three Daily Maverick reader concerns shows that across the key metrics of local government responsibility, there is a large-scale failure. The top concerns for our audience are water (supply, contamination, cuts and costs) and electricity (availability, power cuts in addition to load shedding, the cost of electricity), sewage (draining into the freshwater supply, sewage treatment), dumping and dirty streets.

Road conditions and potholes are the next extensive set of issues followed by other common failures like crime and safety, street lights and general bureaucratic inertia.

In the face of this, the ANC manifesto and strategy tell South Africans it is “failing forward” – the concept that accepts setbacks as a necessary part of the human condition as long as you learn from your errors and continue to progress.

As an example of his commitment to reform, President Cyril Ramaphosa will cite that one in four ANC candidates is young. He will tout the district development model developed by his Cooperative Governance Minister Nkosazana Dlamini Zuma as the antidote to microstate failure. This model divides South Africa into 44 districts and eight “metropolitan spaces” to crowd-source funding from three levels of government to ostensibly improve municipal failures. Cue a lot more bureaucracy and planning rather than doing. It has been in the pipeline for three years and hardly made a dent. Here’s the schtick if you’re interested.

In addition, Ramaphosa will highlight the ANC primaries for mayoral positions where candidates will compete for these top jobs by their expertise and qualification. Party grandé and former president Kgalema Motlanthe will put candidates through the griller as part of his job as head of the ANC elections commission.

These internal contests have seen the party turn over more than half of its councillors who broke local government after taking office in 2016. But the corollary is that the fights over who got onto the candidate lists and who didn’t have marred the ANC campaign. To counter the drama, Ramaphosa is putting on the charm-fest as he did on the long campaigning weekend from 24 to 26 September. He listened, promised, and fixed some of the electricity transformer issues in Soweto after party supporters got very annoyed with him on Sunday, 19 September, about power cuts.

The President is excellent on the stumps. Naturally charming and an attentive listener, Ramaphosa polls with a higher popularity than his party.  He is key to the ANC’s fortunes in the most challenging election battle it has fought. It is broken and divided by factions, one of which wants the other to lose the election.

Ramaphosa’s charm may not be enough for a party written off as being on its last legs by leading commentators like Justice Malala and Sunday Times editor S’thembiso Msomi. Ekurhuleni mayor Mzwandile Masina has already written a book saying the future political landscape of South Africa is in coalitions, suggesting the likely trajectory of the election. 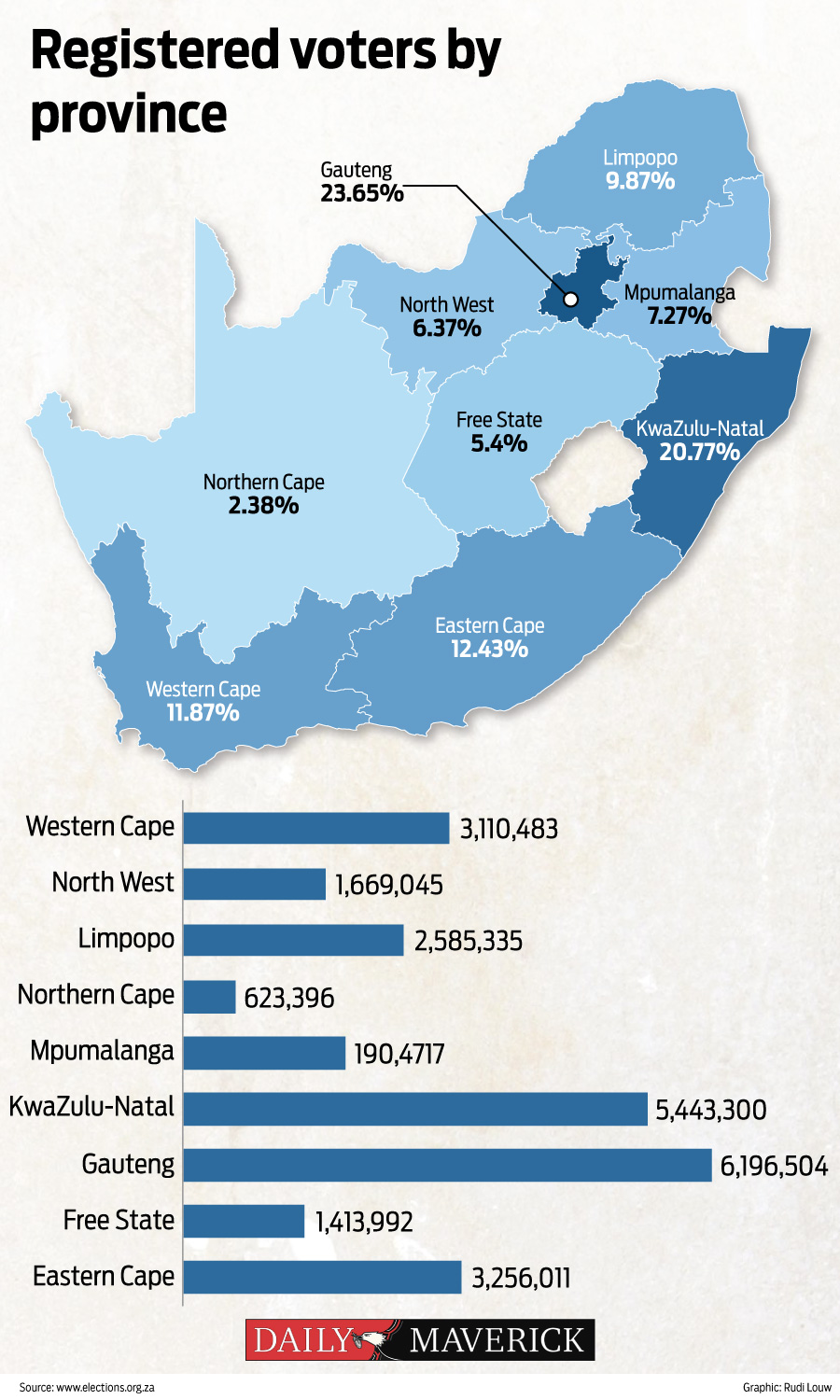 This graphic shows the local election will be fought in KwaZulu-Natal and Gauteng, both challenging terrain for the ANC because of steep and accelerated declines in service. The Eastern Cape is regarded by many as a failed provincial state, and the ANC in the province is divided and often incoherent, posing problems there, too.

When the 2019 national election was announced on 11 May, and the ANC won with 57.5% of the vote, Ramaphosa looked disappointed and crestfallen. Since then, service levels have gone down and, facing the post-pandemic landscape, he will be lucky to improve that margin in the 1 November election. DM