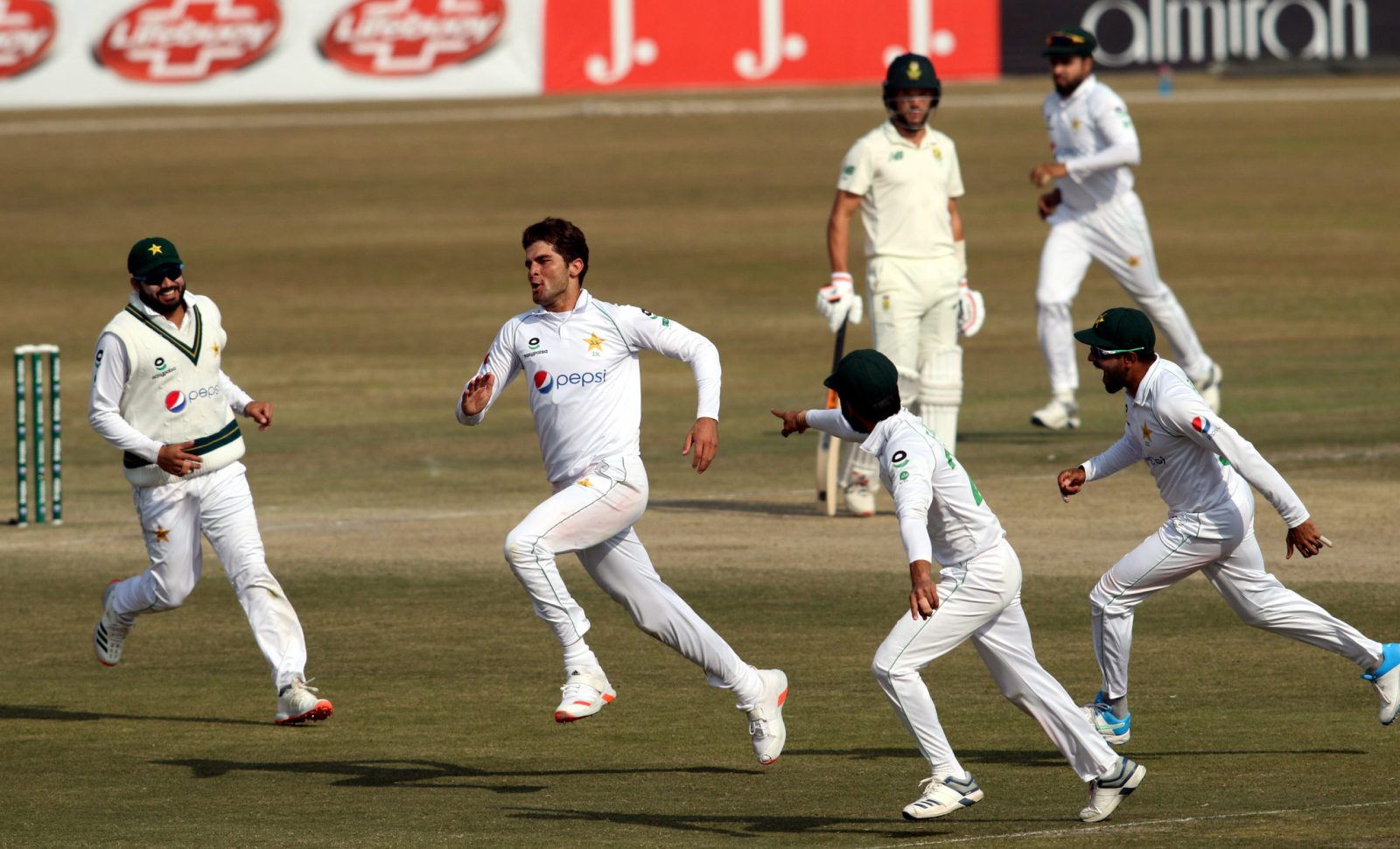 Pakistan's Shaheen Shah Afridi (second left) celebrates after taking the wicket of South Africa's Temba Bavuma (not pictured) during the fifth and final day of the second Test cricket match between Pakistan and South Africa at the Rawalpindi Cricket Stadium in Rawalpindi, Pakistan, on 8 February 2021. (Photo: EPA-EFE / SOHAIL SHAHZAD)

After a decade spent trying to woo back cricket’s international elite, Pakistan is facing the prospect of being declared the game’s no-go area again, and the anger is palpable.

A sense of déjà vu swept the country on 17 September when New Zealand abruptly pulled the plug on their first Pakistan tour in 18 years, citing an unspecified security alert.

The tour was due to get under way with the first of three One Day Internationals (ODIs) in Rawalpindi on 24 September, but the New Zealand team did not travel to the stadium.

With the England Cricket Board (ECB) also cancelling England’s men’s and women’s tours on what would have been their first visit to the South Asian country in 16 years next month, Pakistan’s bumper home season looks in disarray.

The England teams were each scheduled to play two Twenty20 international matches on 13 and 14 October in Rawalpindi, with the women’s side due to stay on for a three-match ODI series from October 17 to 21.

“The ECB Board convened this weekend to discuss these extra England women’s and men’s games in Pakistan and we can confirm that the board has reluctantly decided to withdraw both teams from the October trip,” the ECB said in a statement.

“The mental and physical wellbeing of our players and support staff remains our highest priority and this is even more critical given the times we are currently living in.

“We know there are increasing concerns about travelling to the region and believe that going ahead will add further pressure to a playing group who have already coped with a long period of operating in restricted Covid environments.”

It is a massive setback for cricket-mad Pakistan, which moved heaven and Earth to project itself as a safe destination and won tour commitments from several leading teams.

“We’ve done a huge amount of work in building our credibility back up again in world cricket. The rug has been pulled out from under our feet as quick as that.”

Cricket Australia said it was monitoring the situation and would “talk with the relevant authorities once more information becomes known” ahead of its scheduled tour early next year.

Cricket West Indies did not reply to Reuters’ email asking if it would reconsider its team’s tour of Pakistan later this year, but the atmosphere is not promising.

“The abrupt departure of New Zealand has left many scars for us, and we just certainly hope that this is not going to have long-term consequences for us moving forward,” added Khan.

With the Taliban sweeping to power in neighbouring Afghanistan, Pakistan will have to work extra hard to convince other teams to tour the country.

Shunned by all after the deadly 2009 attack on the Sri Lanka team bus in Lahore, Pakistan’s “home” matches in the United Arab Emirates have been played without fan support and earned the PCB little in the way of revenue. Pakistan has no plans to move home games offshore again, says Khan.

Test cricket returned to the country when Sri Lanka toured in 2019 but PCB officials know their country will only be deemed safe when the likes of England and Australia agree to go there.

In recent times, teams touring Pakistan were accorded the kind of security usually reserved for visiting heads of state and their cricket establishment wondered what else they could have done.

The PCB has ruled out that prospect but is infuriated at New Zealand’s refusal to share the exact nature of the threat that derailed the tour.

“It sets a … dangerous precedent if countries can unilaterally just abandon tours. Then it does affect relationships. Where does it leave us as a sport?” Khan said.

The PCB official said he would be making a broader point at the International Cricket Council, seeking to end the “inequality” within the governing body.

The players are dreading the prospect of having to resume playing their “home” games abroad, but Khan said the PCB would not go down without a fight.

“As it stands at the moment, we have no plans to go abroad to play our cricket,” Khan said.

“It’s taken us a long time to return. We are adamant that we remain safe but of course we’ve also got to have contingency and backups.” DM168/Reuters