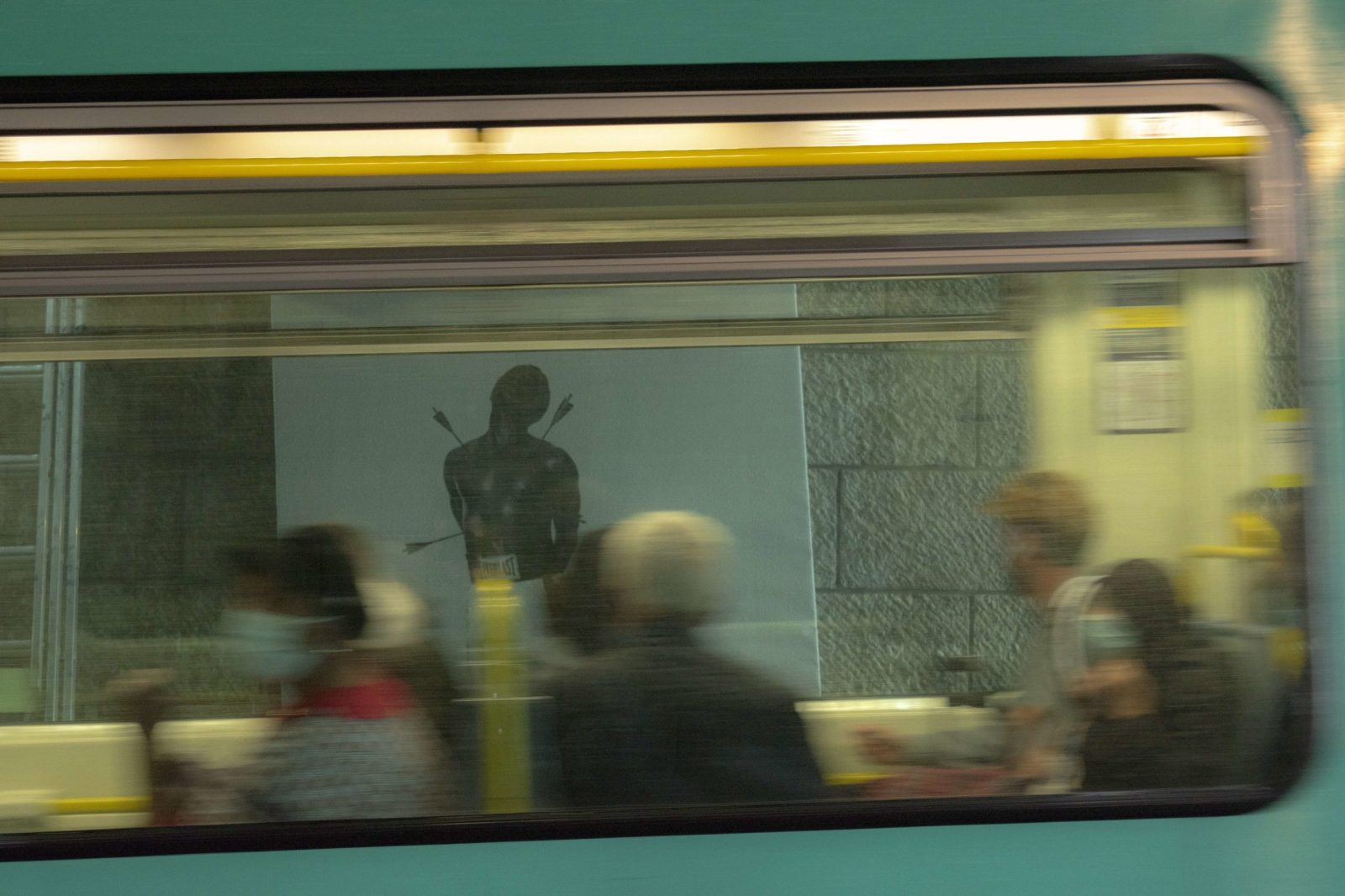 Riason Naidoo, former director of the South African National Gallery, curates an exhibition in the Parisian suburb of Saint-Denis that reconnects local immigrants with their histories through artistic expression.

Saint-Denis, a banlieue lying on the outskirts of the city of Paris, is a melting pot of ethnicities, brimming with a “culture urbaine” prolific enough to sate the artistic cravings of any inspiration-seeking creative. It was the suburb’s rich demographic diversity and complex cultural politics that prompted South African art curator Riason Naidoo to conceptualise neuf-3 – a publicly engaged art exhibition that pays homage to the histories of Saint-Denis’ African inhabitants.

Neuf-3 displays a total of 35 artworks, created by 13 artists from Africa and the diaspora. South African artists Mary Sibande, William Kentridge and Lebohang Kganye are among the artists featuring their work at neuf-3. The exhibition brings African contemporary art directly to the people of Saint-Denis; an opportunity for them to see themselves and their histories embodied through artistic expression in the streets of their hometown.

Many of the Saint-Denis’ inhabitants are descendants of black migrants from former French colonies who arrived in the suburb to find work and refuge after World War 1 and in the years following former French colonies’ achievement of independence. Despite many of its inhabitants being second- or third-generation migrants, Saint-Denis’ African population is often ostracised, plagued by unequal living conditions and disproportionate levels of police violence against non-white individuals.

Naidoo was initially approached by artist residency Le 6B in 2019 to create a drawing exhibition in their gallery. However, he was not totally convinced by the idea of curating an exhibition that would only attract a niche group of “art people” and instead conceptualised neuf-3, an exhibition focused on “bringing African contemporary art to the people”.

Rather than displaying the artwork in a confined gallery space, neuf-3 spans the streets of Saint-Denis, with artworks plastered onto the windows of abandoned restaurants, in the niches of historical buildings and the tunnels along tram routes.

The idea of displaying the exhibition in the public space was in large part informed by Naidoo’s upbringing. He grew up in Chatsworth, a predominantly Indian township in Durban, established during the apartheid era to segregate the provinces’ white population from “other” demographic constituencies.

“I was drawing on my own from a very young age. I went to one of the few government schools that taught art. Under apartheid, not all black schools taught art so I was lucky in a way. When I was 15 years old I chose art as one of my six major subjects. And then, of course, I went on to study art at university, which was unusual for the time. My first exhibition of paintings was at the NSA Gallery and it was the first time that my parents had ever visited an art gallery,” he explains.

“So, I think that wanting to take art to people who have not been initiated in art, comes from this background of growing up in Durban… even when I had my first exhibition of paintings, I had the people that inspired my paintings in mind as the audience. I didn’t make art for the art world, I made art for the people that I know, and at that particular time, for the community that I came from.”

The potential for neuf-3’s success was further encouraged by Any Given Sunday, a Cape Town-based public art project curated by Naidoo in 2016 which reflected on the experiences of black communities living in post-apartheid South Africa.

The art interventions and performances were ephemeral and spontaneous, lasting only a couple of minutes and taking place in locations that don’t typically attract “an art crowd”. The intersecting artistic values of neuf-3 and Any Given Sunday are lucid; both tell stories of the African experience through African voices, sharing their work in spaces that are accessible to the general public.

Neuf-3 is set up as a walking exhibition. “That’s what’s really nice about it, that you have to kind of take a walk to discover the works. It’s a bit like a treasure hunt of artworks. And at the same time, people who are not from Saint-Denis discover the suburb,” says Naidoo.

Step off the tram at Gare de Saint-Denis, onto Rue du Port and the work of Les soeurs Chevalme plastered across the wall of a bridge just outside of the station will immediately jump to consciousness.

Continue a few metres down the road to your left and you will come across Kganye’s work, Never light a candle carelessly, installed against the external wall of a building. Continue along Rue Auguste de Laune and you’d be forgiven for walking past Senzeni Marasela’s Theodora comes to Johannesburg. Its strategic placement on the facade of a grocery shop makes its subject matter blend seamlessly into its background.

Naidoo describes the elaborate process behind deciding where to place the artworks: “I matched the artworks with the sites that I had chosen for the project and the sites with the artworks too; this process was an intuitive and organic one – they kind of went hand-in-hand… If you look at the work of Lamyne M, which is very carefully placed in the niche of a historic building, there’s a little frame around it so his work corresponds with some of the other paintings in the Basilica.”

Barthélémy Toguo’s performance piece takes place between the city hall and the Basilica. The piece emanates the sense of alienation that migrants feel when crossing borders into new territories. Toguo imprints the black and red markings of large stamps onto a long scroll of paper, unravelled across the floor of the town plaza. The stamps are meant to resemble those used to mark the passports of migrants, approving or denying them entry across borders. Positioning Toguo’s piece between the two iconic, official buildings – spaces where people typically need to ask authority for “permission to do things”, as Naidoo puts it – conveys the intricate thought process that went into curating and installing the exhibition.

Many of the artworks are placed along transport routes, places that people pass almost every day, features of their surroundings that have, over time, become part of the minutiae of their daily commute. Much like its inhabitants’ histories, gradually the artworks of neuf-3 have become part of the texture of Saint-Denis, subconsciously embedded in the minds of its inhabitants.

But the curation process is not quite as straightforward as matching an artwork’s subject matter to its surroundings or placing it in an area with high foot traffic. Naidoo points out that with a number of the artworks being displayed outside, the exhibition requires regular maintenance, vulnerable to wind, rain and time. Although he tries to repair them as regularly as possible, the elements still take their toll.

“You see a kind of evolution of the artworks. It brings the element of time into sharp focus since things today are not as they were yesterday.”

Moreover, the artworks are not policed, so viewers are free to interact with the exhibition. One of the artworks was vandalised by some members of the public who, Naidoo speculates, “did not agree with the politics of that image”.

“That’s another thing”, he adds, “people are free to interact with these images, since the artworks are in a public space, meaning the artworks are also in their space, they can interact and react to them in any way they want.”

Video clips neuf-3 on Naidoo’s YouTube channel give clear context to the setup of the exhibition: scenes of commuters run their daily errands with grocery bags in hand, some stop to ponder the works of Kudzanai-Violet Hwami’s artwork which spans the windows of an abandoned restaurant whilst others momentarily turn their heads, consider the artwork and continue on with their day. A man sits at a café and glances across the cobbled pathway at Lamyne M’s regal portrait, which forms part of his Melchior 1er series. It becomes clear that the people of Saint-Denis have accepted these artworks as an integral part of their hometown.

“It’s also the people around them that bring these artworks to life,” says Naidoo. “In the videos and photographs the image on its own is lifeless but when there are people around, or engaging with it, it becomes a completely different image.

“There has been a really incredible response to the exhibition. People recognise Samuel Fosso’s portraits of Angela Davis, they recognise Patrice Lumumba. When we saw that people knew their figures and connected to their histories, that is when we saw the project truly come to life.”

Neuf-3 officially ended on 21 September but many of the artworks are still on display and will be for the next few weeks. DM/ML