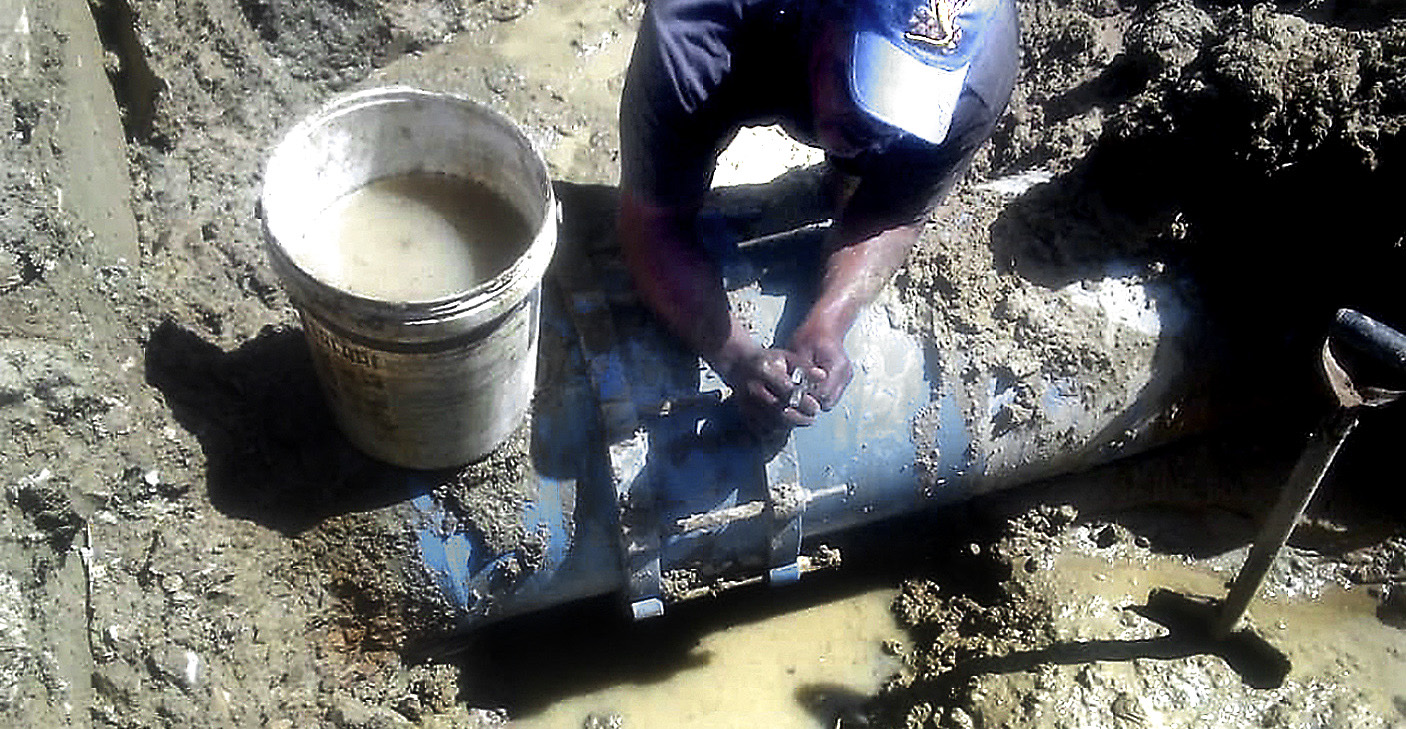 Emergency teams worked through the long weekend to bring an end to a five-day water outage in Nelson Mandela Bay. (Picture: Supplied)

Claims of the ‘likely’ sabotage of a major reservoir in Nelson Mandela Bay were denied on Monday by DA Mayor Nqaba Bhanga as officials and councillors battled to get their story straight over an extensive water outage in the metro that has continued since late last week and could go on until Wednesday.

Large parts of Nelson Mandela Bay have been left without water for the past five days after what was first described as a major pipe burst, then a second pipe burst coupled with delays due to a security threat, a third pipe burst in a river bed and claims of possible sabotage thrown into a chaotic mix of political puffery, bad communication and confusion.

The metro is in the grip of a devastating drought, with dam levels hovering around 10% and predictions that its supply dams will run dry within the next few months unless the area receives significant rainfall in its catchment area. The metro does, however, receive a significant amount of water from the Orange River through the Nooitgedacht Scheme and will as a result avoid a Day Zero scenario.

The metro’s mayor, Nqaba Bhanga, returned from sick leave after a serious car accident to deal with the issue on a day when senior members of his own party, including party Whip Morne Steyn and mayoral committee member Rayno Kayser put out a video claiming that “sabotage was likely involved”.

Another senior member of the party and member of the provincial legislature, Retief Odendaal, earlier on Monday offered a R10,000 reward for information on the extensive outage.

The DA called it Watergate and even had artwork made to distribute on social media: “Answers must be given. Heads must roll.”

However, Bhanga said on Monday he had a meeting with officials and that no evidence of sabotage had “been found yet”.

In the DA-branded video, Steyn assures residents he will get to the bottom of the water problems and that the Chelsea Reservoir has not received water for four days — despite the pipe being repaired two days ago.

“We have been informed that there had been valves closed along the lines to sabotage our government. We will not stand for any political interference with our government,” a grave-looking Steyn said.

The video, widely distributed on WhatsApp, ended with a message: “The DA is fighting this at the highest level. Enough is enough.”

Steyn’s video was released shortly before the start of a high-level meeting about the water outage.

“I have confirmed that no sabotage has been found yet. It is not what is happening. We won’t allow any sabotage,” Bhanga said at the briefing.

A written statement released later states: “A full scale investigation has been launched to determine the causes of this extended outage, and the failure of monitoring systems to pick up on the crisis timeously.

“We cannot at this stage rule out the possibility of this being sabotage. If this is proven to be the case, I will ensure that action is taken and criminal charges are laid against any individuals implicated.”

The executive director for infrastructure and engineering, Joseph Tsatsire, confirmed during the media briefing that the Chelsea Reservoir was only 6% full. He said no acts of sabotage had been identified.

Apart from asking residents who had not had water for five days to save water, Councillor Thsonono Buyeye, who has oversight over Nelson Mandela Bay’s infrastructure portfolio, had no further information.

On Thursday, 23 September, just before the start of the long weekend, the municipality sent out a notice to residents to expect water disruptions in parts of the metro “due to a leak in the water transfer pipeline”.

“Teams are on-site isolating the section, however, this will necessitate the shutdown of the booster pumps, resulting in water shortages if storage is depleted,” a statement from the municipality read.

Water outages in large parts of the city continued on Friday, and on Saturday the municipality issued a statement detailing the problems it had in carrying out the repairs.

“Fixing of this leak was delayed as a result of a broken sewer line. Sewage ran into the trench and had to be rerouted before work on the repair could continue.

“Due to security risks, the repair team was forced to leave the site around 19:45. They are back on-site this morning and are currently replacing the soil that had been excavated to execute the repair. A second repair team and tractor loader backhoe has been requested to speed up the work.

“The secondary leak is being excavated and it is suspected that there is a seam line burst. A welder will be brought on-site to repair the burst once the site is completely excavated.”

Later on Saturday, the municipal statements were more positive:

“The teams have completed the second leak repair. Teams are backfilling the soil that has been excavated from the site. The bypass will then slowly be opened at [the] Stanford Road pump station. Residents should have water supply by tomorrow morning,” the statement read.

But by Sunday, taps were still dry.

“The municipality wishes to update residents that all repairs were completed successfully and are holding firm,” the municipality said in a further statement.

“As indicated yesterday, the priming of the system is complete. The bypass and valves are fully opened and about 80 megalitres per day is being pumped from east to west.

“All western reservoirs have water from the overnight recovery and will continue to fill up during the day. Certain areas, especially those closer located to Greenbushes, will have low pressure for an extended period,” the statement continued.

But, as stated by Tsatsire, the Chelsea Reservoir, supplying large parts of the city, was not filling up. As more complaints arrived about water not coming through, the metro was forced to release another statement on Sunday.

“The municipality wishes to inform residents that the pipeline has been repaired and opened. The pumps are running and are pumping a flow of 65 million litres per day.

“The maintenance teams have patrolled the lines and no major bursts or leaks were found. Therefore, the main reason for the reduced flow being pumped can only be attributed to the higher than expected water demand on the supply system.

“The maintenance teams will continue to check the major pipelines and the pump stations.”

There was no word that a major supply reservoir for the city had been taken offline and was not filling up.

By Monday afternoon the municipality continued with its updates.

“The municipality would like to inform residents that the water pressure at the Standford Road pump station has reduced significantly. The technicians were able to fix a burst pipe… [but] the pressure has remained too low to allow for the installation of a third pump, since only roughly 60 million litres of water per day is being pumped to the western areas.

“Water is still being supplied, but it is being used entirely by the lower-lying areas, leaving nothing for the higher-lying parts. This is the third burst discovered since the pipeline’s repair operations began.

“Teams are currently troubleshooting to determine whether or not there are any more serious issues. An update will be sent as soon as possible.”

The DA’s Odendaal, in response to his offer of a R10,000 reward, received “information” of possible sabotage of the Chelsea Reservoir and posted about it on social media.

Odendaal also asked about the 60 million litres of water that the metro said had been “pumped” to the Chelsea Reservoir.

A statement issued by Bhanga after his press conference said:

“Following the water outages… [we] convened an urgent intervention meeting with Water Services senior management staff today… to get immediate answers and to provide solutions to this crisis.”

The statement explained that issues of “severe drought” coupled with low dam levels and “ageing infrastructure that has not been maintained for many years, is a major problem we face.”

The statement said officials had committed to a water supply by Wednesday and had launched a “full scale investigation”. DM/MC