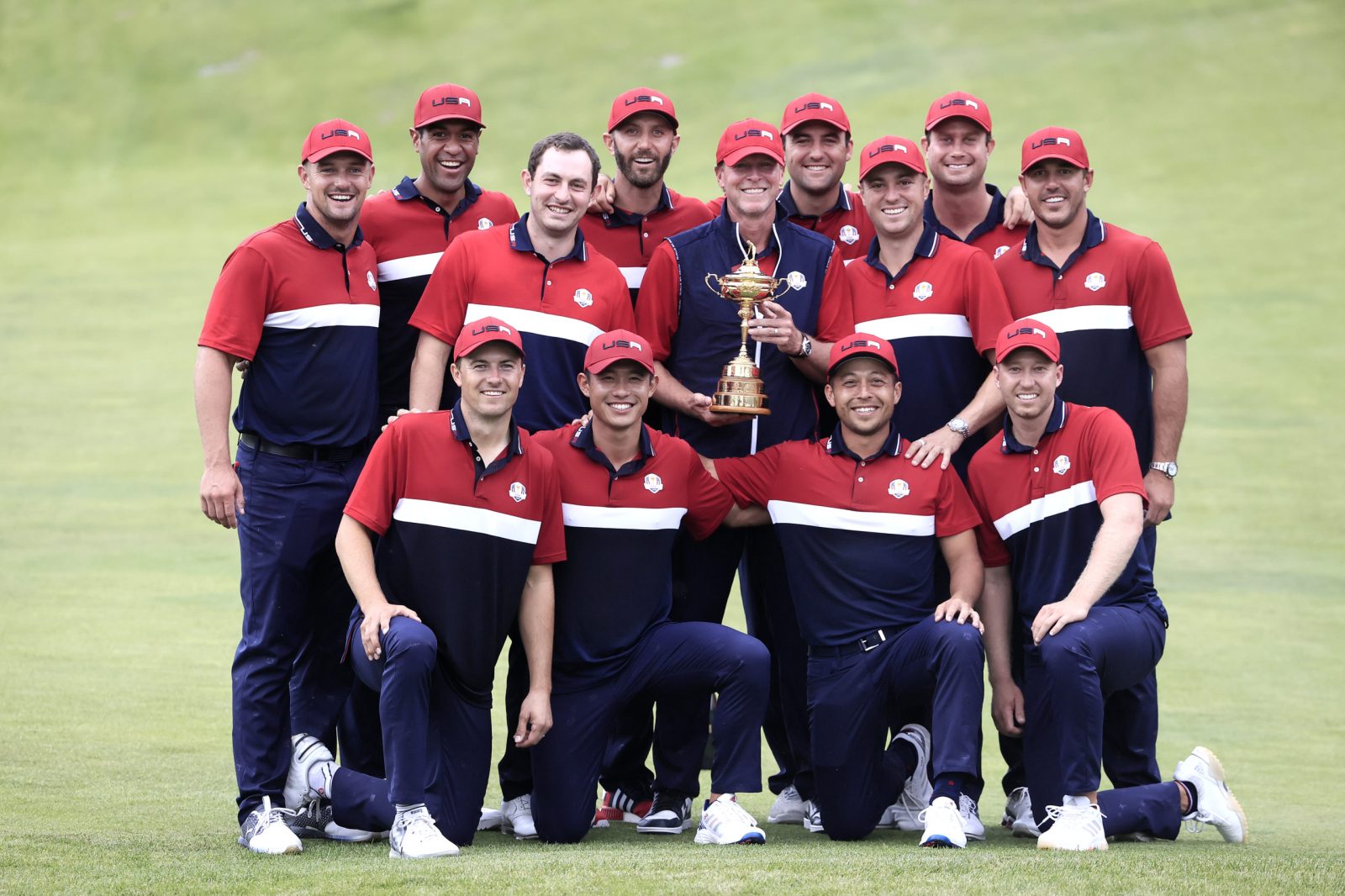 The US team celebrates winning the Ryder Cup on the final day of the pandemic-delayed 2020 tournament at Whistling Straits in Kohler, Wisconsin, on Sunday. (Photo: EPA-EFE/Tannen Maury)

The US, led by a new generation of golfers, reclaimed the Ryder Cup on Sunday, thrashing holders Europe 19-9 to herald what could be an era of domination by the Americans at the biennial competition.

With half the 12-man US team comprising rookies, there were concerns as to whether the newcomers would be able to survive in the gladiatorial arena that is the Ryder Cup against a European squad packed with cutthroat veterans.

But youthful energy trumped experience as the European old guard failed to deliver against the American young guns.

“This is a new era for USA golf,” declared US captain Steve Stricker. “They are young. They come with a lot of passion, a lot of energy, a lot of game. They are just so good.”

While Europe had four players in their 40s, the US had none, with all but three members in their 20s.

And the Americans were not just young but talented, the debutantes making a major contribution on the scoreboard going 14-4-3.

Fittingly it was the youngest member of the squad, 24-year-old Collin Morikawa, who secured the winning point.

Having romped to a commanding 11-5 advantage after the foursome and fourball sessions, the Americans entered Sunday’s singles needing just 3-1/2 points to reach the target required to hoist the little gold trophy.

Morikawa ended Europe’s faint hopes of a comeback when he birdied the 17th to go one up in his match with Viktor Hovland, guaranteeing the US a deciding half-point.

The two-time major winner would make it official a few minutes later with a par on 18 to end the match in a tie, sending a thundering chant of “USA, USA” rumbling across Whistling Straits.

“To clinch this and bring it back on home soil feels so good,” said Morikawa. “The guys pulled through; we didn’t let up.”

The 19-9 rout was the largest margin of victory yet in the current 28-point Ryder Cup format, which began in 1979.

It was just the second time in six competitions and the third in 10 that the US had claimed golf’s most coveted team title.

Never before in 42 previous Ryder Cups had a team come back from more than a four-point deficit on the final day and Pádraig Harrington’s men, while defiant, never threatened to make history.

Whistling Straits provided a stunning backdrop and perfect party spot for 40,000 mostly flag-waving American fans, who flooded into the links-style Pete Dye jewel on the Lake Michigan shoreline on Sunday, ready to celebrate.

Morikawa sent the party into overdrive but it would be some time before all his teammates could join in. Seven matches were still out on the course to be completed, with the margin of victory the only thing left to be decided.

Given their commanding lead, there were worries about a lack of intensity by the US players, but a raucous crowd on the first tee assured their batteries were fully charged heading out.

Needing something magical, Harrington turned to a player who had so far provided little of it at Whistling Straits, tasking a winless Rory McIlroy with sparking a European fight back.

McIlroy, who laboured so badly in the foursomes and fourballs that Harrington stood down the Northern Irishman for the first time in his Ryder Cup career, was first out against Olympic champion Xander Schauffele and found a spark, going two up after four holes and never trailing in a three and two win.

But behind McIlroy, an American red wave was forming on the scoreboard as Jon Rahm, Sergio Garcia and Shane Lowry, who had accounted for most of the European points in the foursomes and fourballs, failed to fire.

Scheffler, another rookie and captain’s pick, was handed the daunting task of taking on the world No 1 and did not wilt from the challenge, going four up on the Spaniard after four holes and never letting him back into the match.

Big-hitting Bryson DeChambeau, the crowd favourite with his monster drives, pounded Garcia into submission three and two to leave the US a half-point from mission accomplished.

Who would get that crucial point was a toss-up between several matches, but Morikawa got the honour when he nearly aced the 17th, leaving a short tap-in that secured nothing short of a draw.

“They got it right, whatever their plan was, they got it right this week,” said Harrington. “They would have been tough to beat at the best of times, let alone when they are at top form. It’s a great win for them.”

McIlroy let out a roar after draining a birdie putt to go three up on Schauffle through 14 holes in the first singles match.

Two holes later, he secured the first point of the day for Team Europe.

It was a rare burst of emotion this week for the Northern Irishman, who appeared stoic – if not exhausted – in going 0-3 during the group rounds.

After finishing off the Olympic gold medallist on Sunday, however, a tearful McIlroy called the Ryder Cup “the best event in golf” while saying he only wished he had contributed more to his team’s cause.

“Incredibly proud to be a part of this team, to be a teammate of all these guys,” he said. “We’ve had a great time.

“I’ve been extremely disappointed that I haven’t contributed more for the team. I’m glad I got a point on the board today for them.”

McIlroy’s view of the event has come full circle since infamously saying in 2009 that “the Ryder Cup is not a huge goal of mine”.

He now regularly speaks about the potential of serving as captain in the future, and McIlroy’s passion for the event was clear in his post-round interview on Sunday.

“It’s been a tough week,” he acknowledged. “And the more and more I play in this event, I realise that it’s the best event in golf, bar none. I love being a part of it. I can’t wait to be a part of many more.

“I don’t think there’s any greater privilege to be a part of one of these teams, European or American. It’s an absolute privilege.”

McIlroy said he was on a mission to score a point for his team on Sunday, even though he knew a record comeback by the Europeans was highly unlikely. But he wanted the point for his teammates – and to serve as inspiration to boys and girls watching the event.

“I have not… never really cried or got emotional over what I’ve done as an individual,” he said. “I’ve said naive and stupid things in the past, but this is by far the biggest tournament that we have in golf.

“You look at the crowds. You look at what it means, it’s the best. I can’t wait to be a part of many, many more Ryder Cups and be teammates with some of these great guys and try to win many more.” DM/Reuters