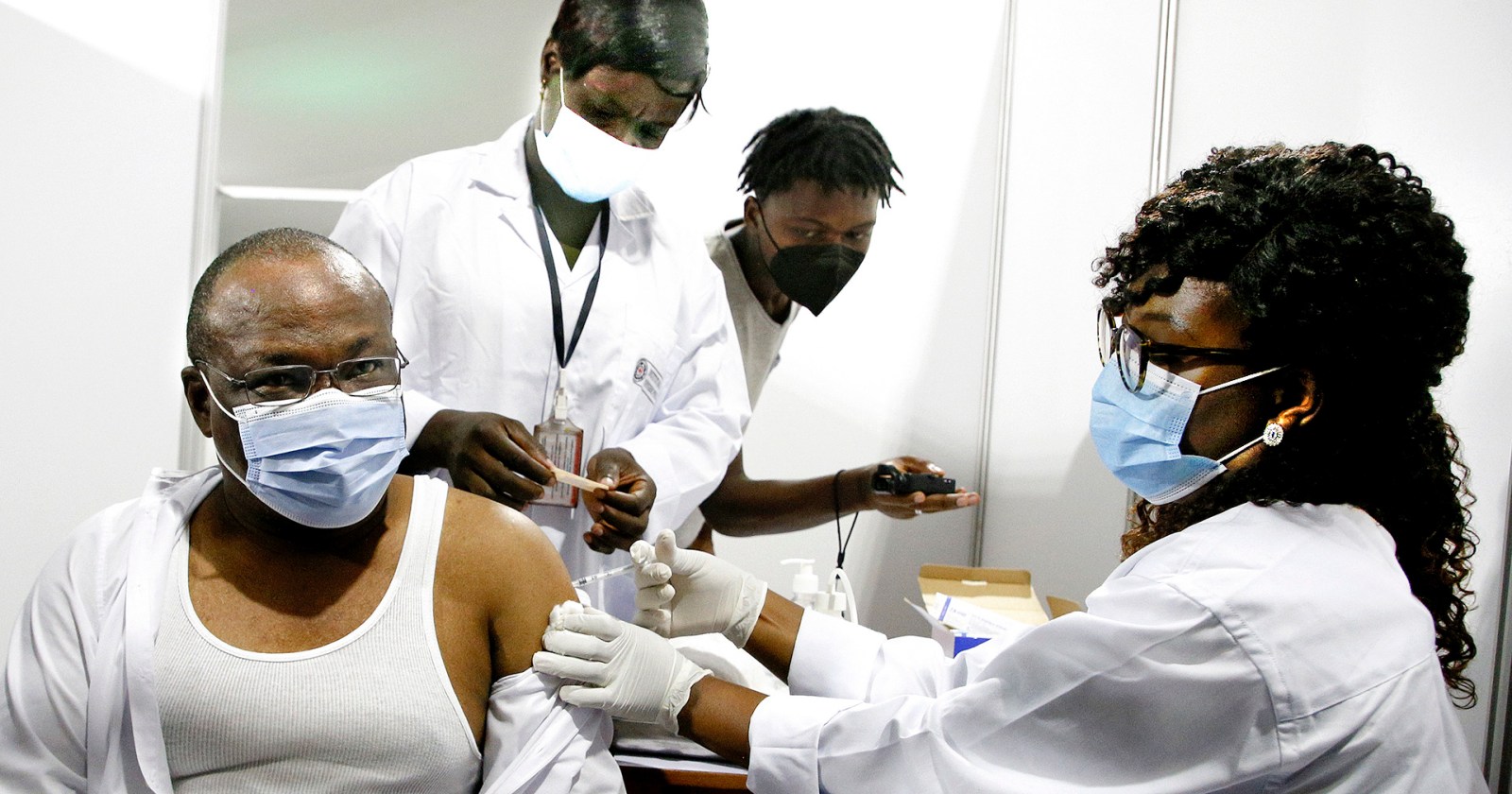 The representative of the World Health Organization (WHO) in Ivory Coast, Jean-Marie Yameogo receives the first injection of the Covid-19 vaccine, at a vaccination center in Abidjan, Ivory Coast, 01 March 2021. Ivory Coast is one of the first countries to benefit from vaccines funded by the Covax system aimed at providing anti-Covid vaccines to 20 per cent of the population of nearly 200 participating countries and territories this year. (Photo: EPA-EFE/LEGNAN KOULA)

Africa’s immunisation drive against Covid-19 is gaining momentum in almost all countries. This follows a prolonged struggle to get vaccines for various reasons, including hoarding by richer countries and a lack of finances to procure large doses. There was also the failure of the voluntary Covax programme coupled with India’s decision to halt vaccine exports from the Serum Institute of India in response to its own Covid-19 crisis.

Vaccine shipments to Africa have however ramped up in the past two months. Morocco, South Africa, Egypt, Nigeria and Zimbabwe have the highest number of vaccine doses on the continent (Chart 1). Eritrea is still closed off to the idea of a vaccine roll-out, and Burundi only started accepting vaccines recently.

The Africa Centres for Disease Control and Prevention says a meagre 144.5 million doses had been supplied across Africa by 9 August and about 111.3 million had been administered. In the last week of August, the continent dispensed 13 million jabs, three times more than in the previous week — a factor attributable to increased vaccine supply.

Although this is an improvement, only about 3% of Africa’s population of 1.3 billion have been fully vaccinated, and only six countries have inoculated 30% of their population with at least one dose (Chart 2). This is in stark contrast to the 62% to 91% in most developed countries.

Chart 2: % of population across Africa given at least one dose

Despite this progress, the vaccination gap isn’t narrowing fast enough to prevent new variants from emerging and enable economic recovery from the pandemic’s crippling effects. In fact, at the current rate, it’s unlikely that Africa will meet the goal set by the World Health Organization of fully vaccinating 30% of people by the end of the year.

A worldwide consensus is needed about how to meet the vaccine requirements of the global south — and Africa is taking an increasingly proactive stance to achieve this.

The African Union (AU), under the auspices of the African Vaccine Acquisition Trust (Avat) and member countries, came together in August 2020 to pool resources and buy vaccines with financing from African Export-Import Bank. As part of the March 2021 procurement agreement to purchase 400 million units of the Johnson & Johnson/Janssen (J&J) vaccine, monthly shipments have accelerated to African countries.

Another achievement is the partial production of the J&J vaccine by South Africa’s Aspen Pharmacare. Using the ‘fill and finish’ process, the vaccine substance from Europe is now bottled in South Africa and shipped to other African destinations. This is already improving access and shortening the vaccine distribution chain. And it’s probably a better alternative to campaigning for richer countries to support a waiver on the World Trade Organization’s Agreement on Trade-Related Aspects of Intellectual Property Rights (Trips).

In addition to the Avat agreement, many African nations are also acquiring doses bilaterally from wealthier countries through direct purchase or donations, sometimes channelled through the Covax vaccine-sharing scheme.

African countries are — as a collective and individually — working hard to gain greater access to vaccines. However, equitable vaccine sharing and distribution should be a priority for all nations. Continued stockpiling and vaccine nationalism could negatively impact the trajectory of Covid-19 globally, but especially for Africa and the many developing countries that cannot access vaccines for their citizenry.

Apart from the likelihood of novel variants emerging, this scenario doesn’t bode well for the economic recovery of African countries — many of which are facing subdued economic prospects in the wake of Covid-19. Vaccine supply and distribution to Africa and the global south must be accelerated.

The first step is creating a global framework to mitigate unfair competition in purchasing and accessing vaccines. Second, Covax should be restructured with African countries at the forefront in championing funding pledges and commitments from more affluent countries. This would change the current voluntary system and reduce Africa’s dependence on richer nations.

There are enough vaccine doses to go around. The United States will have a surplus of about 500 million to one billion vaccine doses by the end of the year, and Canada has vaccines for 2022 and 2023 with options to extend to 2024. Countries have a right to protect their citizens, but stockpiling doses when most of the world’s population has not been inoculated is counterproductive. No one is safe from Covid-19 until everyone is safe.

Third, global policies around vaccines must be coherent. The European Union (EU) doesn’t recognise the Indian-made version of AstraZeneca (Covishield) for travel (although some EU countries now do) — but has approved the UK version. Such inconsistency undermines vaccine confidence in developing countries. It impedes the uptake of AstraZeneca, especially for those planning future travel, even though other vaccines still aren’t readily available in much of Africa and other developing regions.

Fourth, greater financial support from global institutions like the World Bank and International Monetary Fund will enable African countries to purchase and roll out Covid-19 vaccines independently. Finally, the continent needs more vaccination centres and awareness campaigns that distinguish vaccine facts from myths. This would help reach the goal of fully vaccinating 30% of Africa’s population by the end of 2021.

A more coherent global framework is needed to tackle the pandemic effectively. Despite the challenges, Africa is showing resilience and cooperation by pooling resources and joining forces to increase vaccine supply and distribution. But it should not be this difficult for the continent or any region to acquire life-saving vaccines during a pandemic that affects us all. DM