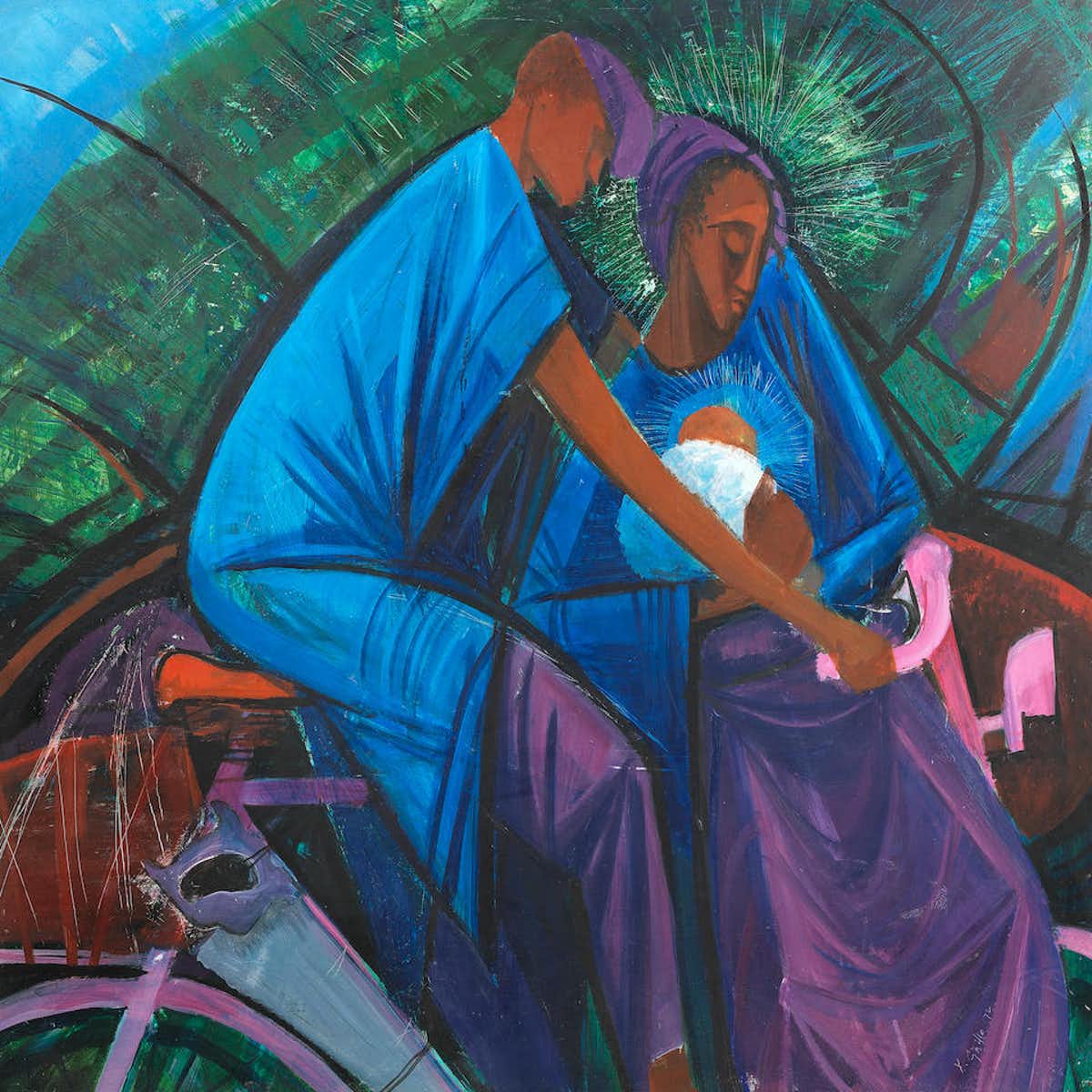 A painting by Yusuf Grillo. Image: Bonhams/ The Conversation

Who was Yusuf Grillo?

Yusuf Grillo was not only an artist but also an administrator, educator, and mentor to other artists. He was born in 1934 to the family of Yinus Ventura Grillo and Kalia Grillo in Lagos. His grandfather had returned from Brazil to his African homeland after the abolition of the slave trade. Grillo was identified in Yoruba culture as Omo Arugbo (child of old age) because he was the last of 11 children.

He attended Saint Andrew’s Primary School, Oke Popo, Lagos; Saint Peter’s Primary School, Faji; and the Anglican Christ Church Cathedral School, where Aina Onabolu, the father of modern Nigerian art, was a visiting art teacher. He also attended the Secondary School of the Yaba Technical Institute (now Yaba College of Technology). He learnt and benefited from the artistic practices of other pioneers of modern art in Nigeria, including Akinola Lasekan and J.K. Oye. (Both were contemporaries of Aina Onabolu).

In 1956, he enrolled to study Fine Arts at the Nigerian College of Art, Science and Technology, Zaria, now Ahmadu Bello University, Zaria. He graduated with a diploma in Fine Arts in 1961, specialising in painting.

What role did he play in advancing art in Nigeria?

During his long art career, over six decades, Grillo played a significant role in the advancement of contemporary art and art education in Nigeria. He was a prominent member of the Zaria Art Society, formed by students at his college. Their creative activism left indelible imprints on Nigeria’s artistic terrain. The first three sets of students who graduated in 1959, 1960 and 1961 were not all opposed to the imported curriculum, replete with colonial imprints from the Royal Art School. But they were opposed to their British lecturers’ abhorrence of any African art background in their works. The students saw this as culturally slavish and unrelated to their artistic heritage.

This gave rise to the “Natural Synthesis” artistic ideology, which defined modern African art as a synthesis of the old and the new. The old was the indigenous cultural artistic practices of Africa, while the new was the Eurocentric stylistic variables promoted by the West, especially during the colonial years of the 20th century. The Zaria students stated in their manifesto that they had a duty “to promote, through art, Nigerian cultural values with utmost dedication, love, and willpower”. They passionately pursued this ideology and explored indigenous themes in their art.

These pioneering members of the Zaria Art School may be perceived as classmates but they were not. Their years of training in Zaria simply overlapped. Grillo personified the spirit of “Zarianism” as he was sensitive to Yoruba traditions and drew inspiration for his works from that culture. In doing so, he represented images from Yoruba traditions that echo the lived experiences of people in fashionable Yoruba cultural dress forms.

Another major role Grillo and other “Zarianists” played in advancing art in Nigeria was towards the establishment and growth of other art institutions in the country. Grillo laid the artistic foundation at Yaba College of Technology, Lagos, where he taught art for several years from the early 1960s and served as head of department for 26 years.

What was the core of his work?

The bulk of Grillo’s works show the influence of Yoruba culture, through which he forged his interest in creating African cultural identity. His subject matter was influenced by human activity. His themes are derived from everyday life events around him, rooted in Yoruba indigenous context. Although a devout Muslim, Grillo installed many splendid stained glass designs in churches in Nigeria. He participated in several group and solo exhibitions and produced large bodies of paintings in public and private collections.

What techniques was he famous for?

Although Grillo is famous for Western naturalistic style, the technique he is known for is the use of planular forms and angular structures which found an appropriate correlation in the Yoruba wood carving style. His works highlight more vigorous engagement with the blue, purple, and green palettes. The formal characteristics of his paintings show stylised and elongated figures. They are easily identified by their slimness, elegance and grace, which represents the contemporary ideal of beauty in the Lagos of his youth.

The style and techniques of Grillo’s works must also have been influenced by his interest in mathematics and experiments with cubist forms, using bolder geometric shapes. In addition, his interaction with architects and workshop training he attended in Bradford in Britain taught him about stained glass techniques. It also spurred his interest in mosaic, santex, and other materials which can be used to embellish buildings on monumental scales.

What legacy does he leave?

It might be argued that the most enduring legacy Grillo bestowed is his faithfulness to Yoruba culture without ossifying traditions. He represents a creative bridge that filled the transitory gap between dynamic Yoruba wood carving traditions and contemporary Yoruba art.

He will be remembered for the gaps he filled, the many artists he mentored, his creative works and for laying the foundation of modern art in Yaba College of Technology, Lagos. DM/ML

Sule James is a research associate at the University of Johannesburg.