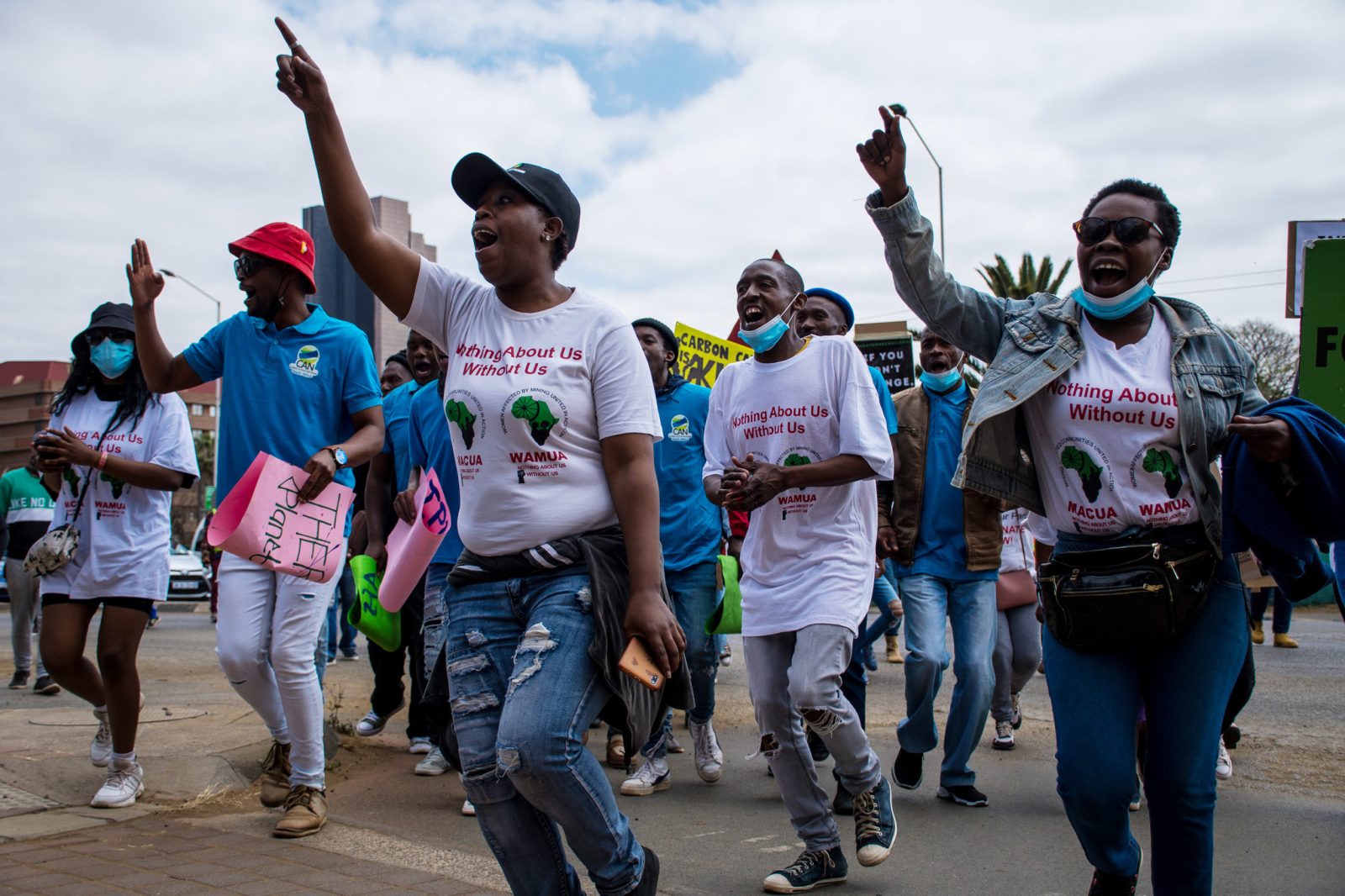 Climate organisations, mining communities and labour unions march to the Department of Mineral Resources and Energy in Tshwane on Wednesday. (Photo: Julia Evans)

Members of mining-affected communities and organisations combating the climate crisis have chained themselves to the gates of the Department of Mineral Resources and Energy in Tshwane, demanding the implementation of policies on renewable energy and Minister Gwede Mantashe’s resignation.

On Wednesday, climate crisis organisations, mining communities and labour unions in solidarity with the Climate Justice Coalition kicked off a nationwide campaign against the Department of Mineral Resources and Energy, demanding that Minister Gwede Mantashe step down, that affected communities be included in decision-making, a just transition to renewable energy and an end to new coal, gas and oil practices.

As part of the #UprootTheDMRE campaign, Malik Dasoo from Extinction Rebellion, along with four others, chained himself to the gates outside the national offices of the DMRE and said he would not leave until Mantashe accepted the memorandum.

Mantashe didn’t come out to accept the memo. Apparently, he wasn’t in.

Deputy Director-General Patricia Gamede accepted the memorandum on his behalf from Extinction Rebellion activist Sunny Morgan. Gamede signed the memo, acknowledging she received it, and said she would pass it on to Mantashe.

“We want the minister to consult with communities so that we can have consent to the clean energy future that South Africa demands. Otherwise, we’re going to relegate our people to a catastrophic climate future that will be harmful to all. And Covid will look like a tea party compared to the climate crisis,” said Morgan.

Communities most affected should have a say

The campaigners demanded that the DMRE obtain informed consent from all communities affected by mining and energy projects.

Alex Lenferna, secretary of the Climate Justice Coalition, addressed the crowd, saying, “We stand together, not just as environmentalists as they try to call us. We are communities that are facing the frontline impacts, who are the ones facing the pollution… We stand together with workers and trade unionists who demand that we put just transition policies in place so that when we do transition away from coal, we are not leaving behind ghost towns, we are not leaving behind legacies of unemployment.”

Moeketsi Monaheng from Right2know told Daily Maverick, “If people are involved in decision making, they will be able to make informed decisions. “We know DMRE has always excluded people… and we need Minister Mantashe to engage people on the ground; people who are suffering every day because of these decisions.”

#UprootTheDMRE called for Mantashe to step aside to allow new, progressive leadership to take control of the department.

Rehad Desai from Climate Justice Coalition told the crowd, “We know if you live in Witbank, Middleburg, parts of Mpumalanga, parts of Johannesburg, what this coal does for us in our daily lives. The air quality in our province means that on average we will live three years shorter than anybody who’s grown up and lives in another province.”

One of these people is Vuyelwa Cindi, part of Women Affected by Mining United in Action and from the mining town of Kwa-Thema, in Ekurhuleni.

Cindi told Daily Maverick, “What we want them to know is that they need to consult and sit down with the community and hear what we want to say. Because that is our community. That is our land. We are the people who are affected.”

Cindi and others from Kwa-Thema said growing up so close to the pollution caused their community to get sick – many have developed asthma and skin rashes.

Molly Mbangula, who’s lived in Kwa-Thema since 1955 (after her parents were forced to moved there by the apartheid regime) said, “The people they don’t know, they [government] keep quiet… people are getting sick. They have asthma, they have miscarriages. Especially women. They’ve got that skin disease.”

Qedusizi Masina from Kwa-Thema said, “When it comes to farming, it affects women the most because they do farming and the soil is affected. All the veggies, the cabbages, they become yellowish and it’s not healthy. So they have to throw it away. And so now people are getting hungry in your household. You can’t provide anymore as a woman.”

“People have the right to know and the right to be engaged. And if they are not engaged, they should stand up against these looters and these big corporations which are putting them down,” said Monaheng, explaining how some communities, like those in Soweto, don’t have access to electricity.

One of the core demands of the #UprootTheDMRE campaign is to get the DMRE to stop investing in harmful energy projects like coal, oil and gas exploration and fund renewable sources of energy like hydro, solar and wind to provide affordable and safe access to electricity, starting with low-income households.

Lenferna from the Climate Justice Coalition explained: “What scientists and economists are warning us is that we can’t afford to dig up and burn new coal, oil and gas. That’s a clear example of harmful extractive and pollutive projects.

“The cost of renewable energies has dropped so rapidly that actually solar and wind are the cheapest forms of energy on earth right now,” said Lenferna.

Activists said the fastest and cheapest way to solve unequal access to electricity, load-shedding and provide the most jobs is through renewable energy, however, the DMRE is preventing this from happening.

Lenferna explained, “Eskom has a plan on the table to accelerate the transition to renewable energy. And they’re trying to secure international climate finance. And that’s one of the only ways that Eskom can save itself from the mess it’s in and move forward towards renewable energy. And Mantashe, the DMRE are the only ones standing opposed to it.”

Considering how affordable and safe renewable energy is, activists said it doesn’t make sense why the DMRE would not sign off on a plan to implement it.

Lenferna said the reason is the influence of profit-hungry corporations and mining companies, as well as corruption within the DMRE.

“For example, in the Karpowerships programme, where they’re trying to bring in these Turkish power ships… It’s clear the modelling shows that we don’t need a 20-year lock-in programme for partnerships. But when there’s lots of money to be made, over R200-billion, then people profit off that. So that’s why they push for these sorts of projects over the ones that are more distributed, less susceptible to corruption, and better for the people of South Africa.”

Desai agreed it was down to corruption, saying, “There’s a lot of Black Economic Empowerment interests inside the ruling party, well connected, who want to stay with coal [sic].”

Mantashe is clearly feeling the heat. Lenferna said that Mantashe called him last week after reading an article he wrote talking about Mantashe and the DMRE.

“And then he threatened to take me to court for the claims I was making about him, which are backed up. And when I started to challenge him on some of those points, he just angrily hung up on me. And then the next day, his wife called me and also said that the lawyers are going to be in touch.”

Meshack Mbangula from Mining Affected Communities United in Action addressed the crowd saying, “Now we find ourselves with these greedy capitalists who are making money and making sure that we remain poor.

“From 1997, they’ve been talking about issues of changing to renewable energy. It’s 2021, we are still facing the very same thing. Who can tell me who has ever faced freedom or democracy in South Africa?”

The crowd responded, “No one!” DM/OBP