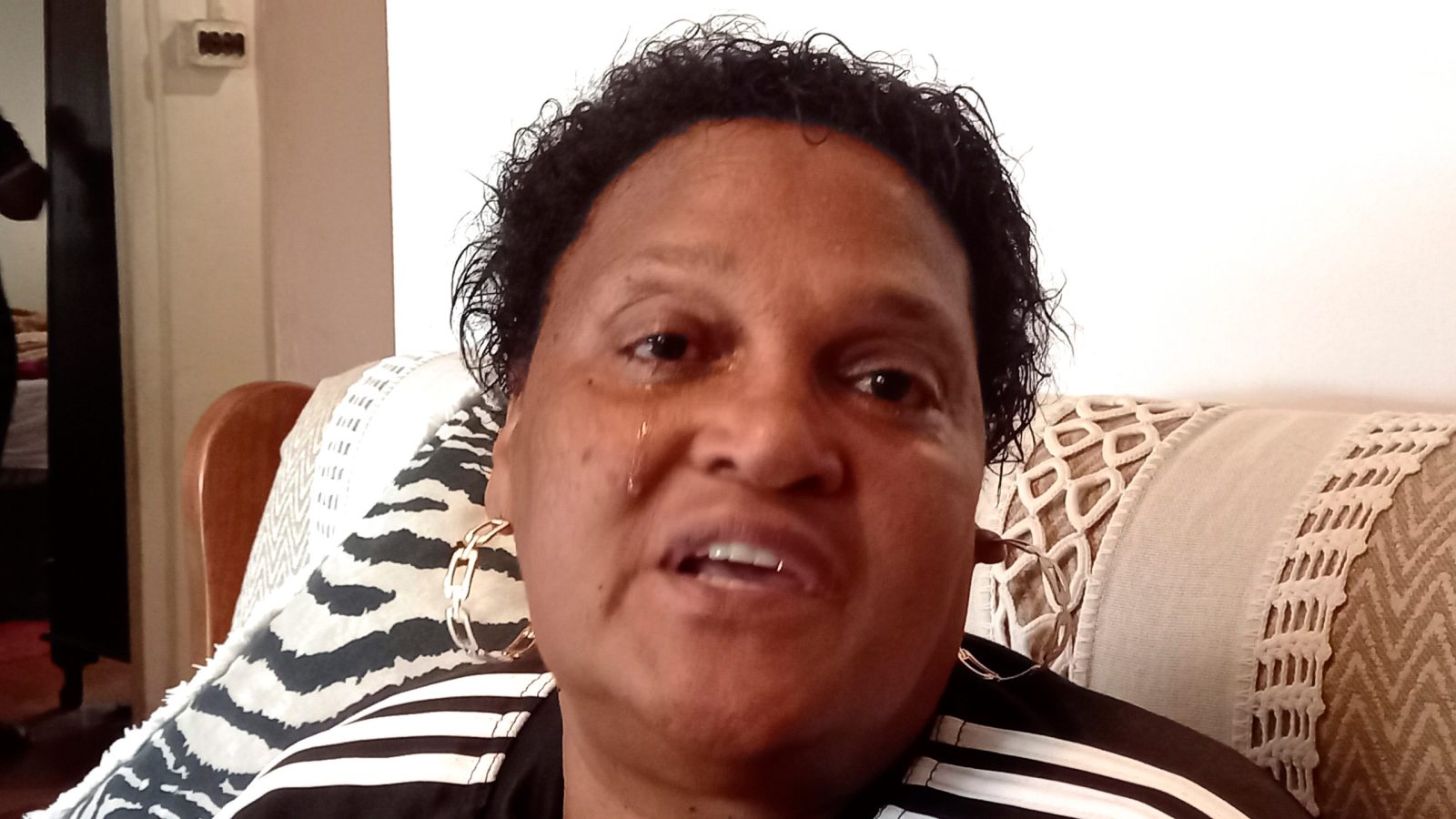 A sobbing Christine Adams is one of several people in Cape Town who invested huge sums in an alleged Ponzi scheme and were promised high return on their investment. She lost more than a R1 million she wanted to keep for her retirement. (Photo: Vincent Cruywagen)

It is too late for tears for a 57-year-old Bontehuewel mother who lost more than R1-million in an alleged Ponzi scheme. She now sells hot chips and rotis to make ends meet.

Christine Adams (57) is one of several investors, both local and overseas, who lost their life savings or pensions in an investment scheme allegedly run by Devin Persens.

Persens was arrested on Thursday, 9 September and is accused of luring people into the scheme with the promise of a 20% or 30% return on their investments. Investors were apparently asked to invest in properties or diamonds.

Adams said that Persens was very convincing and made her believe that her investment was safe and that she would get dividends as agreed. She opted to invest her money into properties with a monthly return of R50,000.

In Adams’ case all documents and deals were signed at Persens’ Somerset West office more than 15 years ago.

Persens was arrested by police in Mossel Bay on charges of fraud and allegations that he operated a Ponzi scheme. Investors who spoke to Daily Maverick said they had lost more than R2.5-million in the scam.

Maverick Citizen caught up with Adams at her Bonteheuwel, Cape Town, home and took her back to where it all started, where she was convinced to invest her “nes-eiertjie” (nest egg) with Persens.

“When I heard about his arrest it opened old wounds. I’m feeling very hurt. My husband George passed on three years ago. The money I invested was the money my late husband got after he fell down the steps at a Sassa building in Bellville in 2005,” she said.

She added this was the money she and her husband would have put away for their retirement.

“I regret the day that I decided to invest our money with Devin,” she said.

Adams said that about 15 years ago she completed forms to invest R1-million with Old Mutual, but was convinced by her brother to invest with Persens.

“My husband was with me when we invested the money into Persens’ investment scheme. He promised us that we will receive our R50,000 monthly dividend,” she explains.

But the picture changed from bright to gloomy when she celebrated her 50th birthday in 2014.

The dividends payments, she said, stopped and Persens “simply vanished”. She had only received one R50,000 dividend payment. Adams opened a case of fraud at the Somerset West police station. Then her husband started to panic.

“My husband used to tell me at night this money would help us to get old without struggling. My husband died of a heart attack in church and I believe he died because he worried how we were going to survive.”

With her husband gone and Adams only receiving a R2,500 pension from her husband’s former job, she struggles to make ends meet.

“How do I at this late stage in my life and without a husband make up a million that is down the drain?

“The money I lost robbed me of a good retirement. Now I’m forced to sell doughnuts, chip rolls and rotis to survive. I cannot turn the wheel back and it is a really bitter time for me,” Adams said.

Her advice to people was to make sure that they did a thorough check on individuals or companies offering investment opportunities with high returns and to make sure they are registered.

Another investor, who is currently overseas and spoke on condition of anonymity, said in WhatsApp messages that she had first encountered Persens at a meeting at a Standard Bank in Helderberg.

“Clients had the opportunity to mingle and Persens engaged with me regarding his business and opportunities. At that point I was looking into opportunities, maybe property, or any type where I could start a small investment while I am overseas,” her message reads.

She said that after making an appointment and meeting Persens at his offices she was presented with two business opportunities: investing in selling and buying diamonds, or investing in a franchise with an option of doing a free business course for a year.

But a deal wasn’t concluded and she went overseas.

In further messages she claimed: “I came back overseas, then Persens starting contacting me, messaging me and  sending emails. The entry investment was one million which I didn’t have.

“I then went to the bank and borrowed money in December 2016 and transferred R600,000 a week before Christmas.”

Three months later, in March 2017, she read press reports that Persens had been accused of operating a Ponzi scheme.

“It took me a long time to realize that it was a Ponzi scheme. He promised me he will return every cent. I have also opened a case at Somerset West police station,” she said.

Police had been trying to locate Persens since 2017 and last month circulated a photograph requesting people to come forward with his whereabouts.

Police eventually traced the alleged scamster to Mossel Bay and arrested him on 9 September. According to police spokesperson Warrant Officer Joseph Swartbooi, Persens was ill and hospitalised.

Swartbooi added that once he was declared healthy by a medical practitioner he would appear in Somerset West Magistrates’ Court on a charge of fraud.