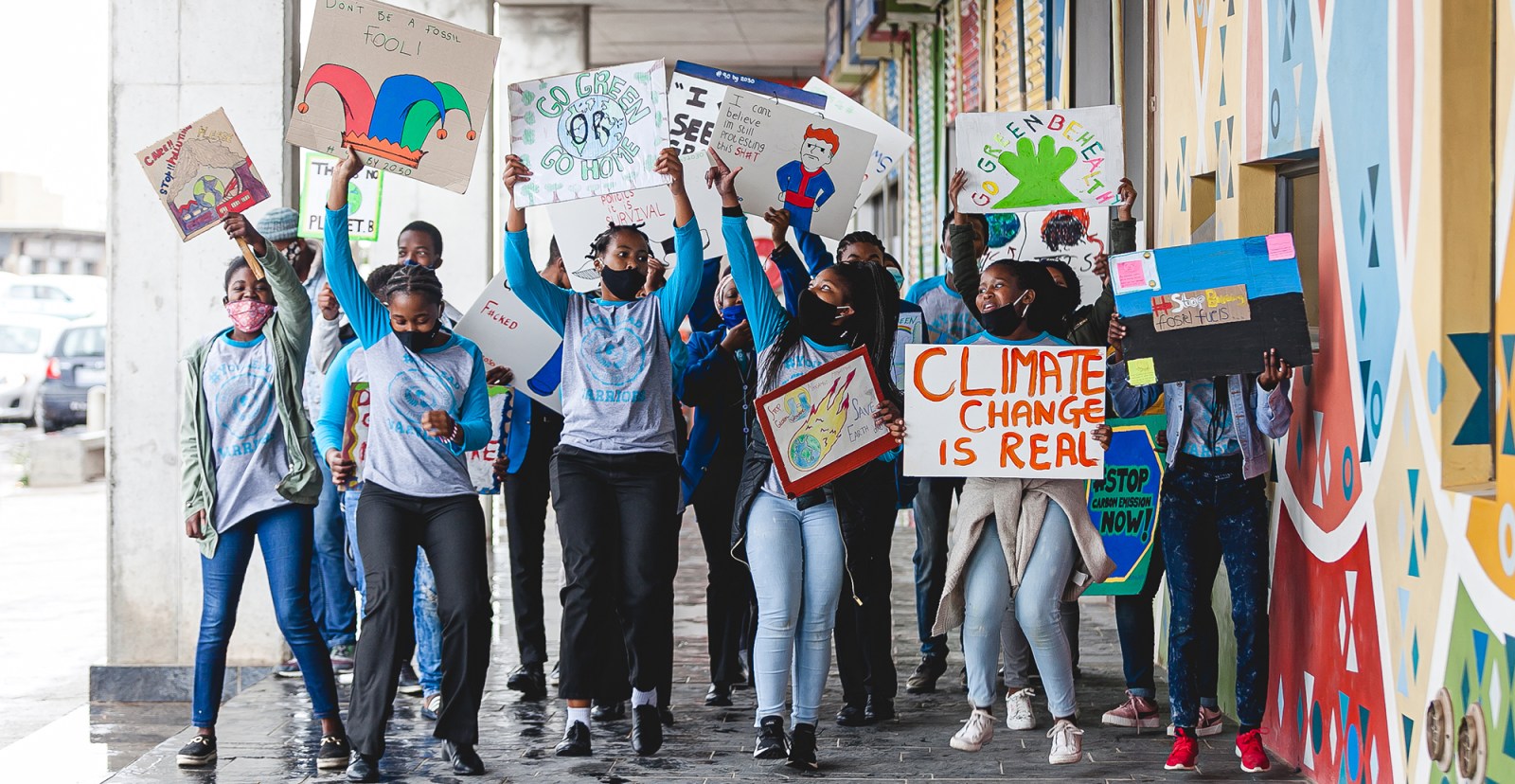 Young people are demanding that the climate crisis be taken seriously, and will come together on Friday for the global climate strikes under the theme #UprootTheSystem. (Photo: Mawande Sobetwa)

Young people who will bear the brunt of global warming consequences are demanding more concrete action from their leaders. The activists are calling for a new system that accommodates and adapts to a changing climate.

Young climate activists came together to make their voices heard at a media briefing before the global climate strikes on Friday. Under the theme #UprootTheSystem they are demanding systemic change and calling for an end to the undermining of the climate crisis.

During the virtual briefing, the activists said they were exhausted by their respective governments’ “tokenistic engagements” with the youth, and that their leaders were not taking them or the climate crisis seriously.

Thunberg said the theme “Uproot The System” symbolises that the climate crisis does not exist in a vacuum, and is caused by the same factors that contribute to global injustices.

“We cannot just solve one of these crises without solving the others. That’s why we are striking now – to uproot the system – and are focusing on intersectionality and on the people in the most affected areas,” the 18-year-old activist said.

Klaasen (23) said the ACA and allied organisations had a list of seven demands. Some of these include:

“The DMRE is the biggest stumbling block towards our future that is defined by climate and social justice, and we need them to either step out of the way or adopt progressive change going forward to a just future and transition to renewables and alternatives. Every year, more than 20,000 South Africans die of air pollution caused by burning coal and the investment in fossil fuels,” Klaasen said.

The local theme of the strike in which Klaasen will be participating will be “Uproot the DMRE”, slotting into the global theme, “Uproot the system”.

The climate crisis and the pandemic pause

Thunberg said the climate crisis did not disappear because of the pandemic, but that it was now more urgent than ever. Although slow demand for fossil fuel products during the global lockdowns seemed to be a step in the right direction as far as curbing emissions was concerned, this didn’t solve the climate crisis. Thunberg said one of the reasons the strike should go ahead was to demand actual change in a system that was downplaying the crisis. 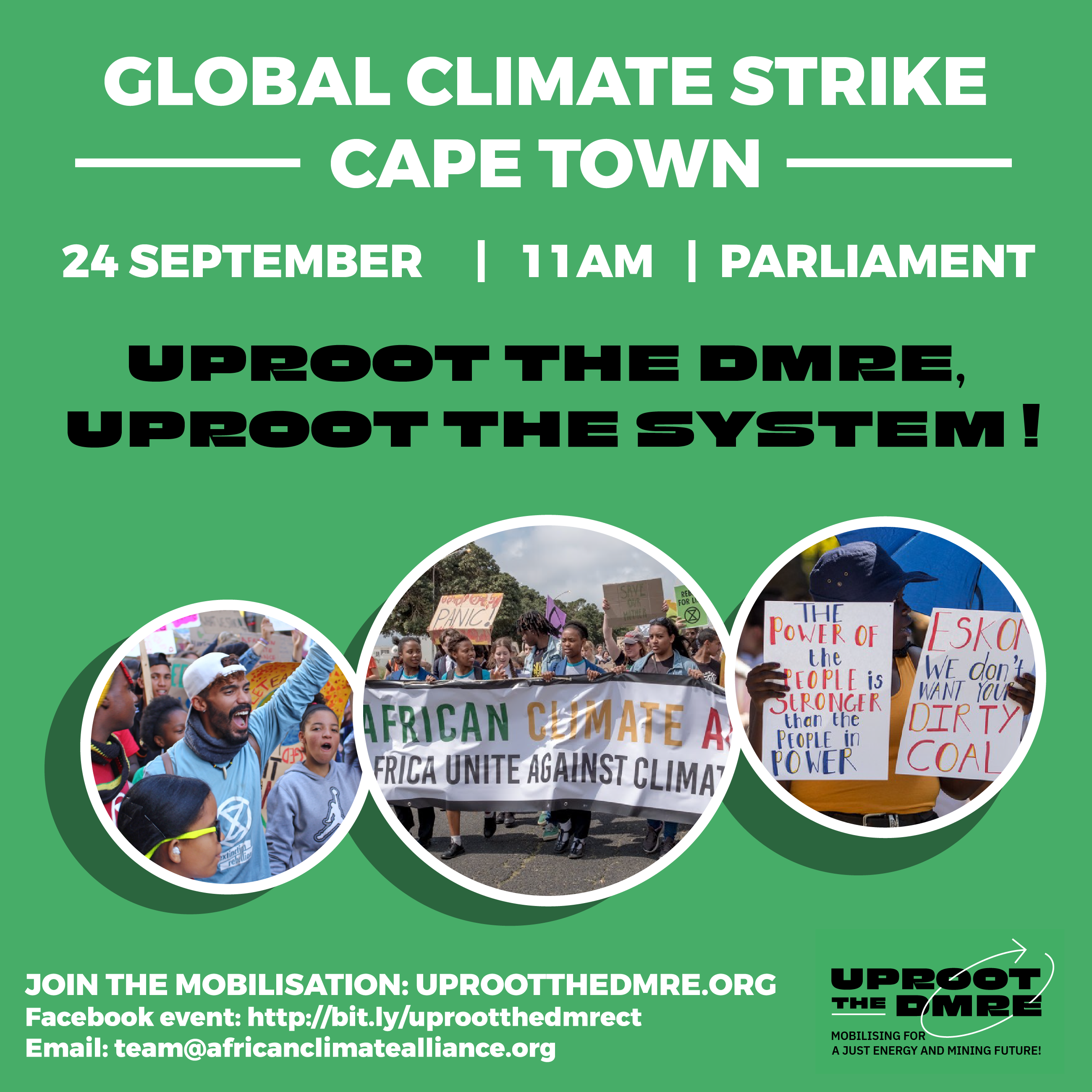 Emissions in 2021 are expected to increase by 4.8% as demand for coal, oil and gas rebounds alongside the global economic recovery, leaving this year’s emissions at about 400 Mt of carbon dioxide – 1.2% below the 2019 peak.

For Vanessa Nakate, it is important to participate in the strike and represent Africans who are at the receiving end of climate crisis consequences, even though the continent contributes the lowest in global emissions, at just about 3%.

As a result of the climate crisis, the Ugandan activist said Africans have lost their lives and livelihoods, and the lack of government response has resulted in agony, starvation and death.

“This is why we will be striking on the 24 September – to demand climate justice. We have been speaking out… we’ve been doing everything we can to remind the leaders and demand from the leaders what rightfully belongs to us,” the 24-year-old activist said.

“But it’s also important this Friday to rise up again for the people and for the planet, because the climate crisis wasn’t put to rest during the pandemic.”

As the climate conference COP26 nears, Nakate said, “we expect that leaders are going to give talks, speeches and sweet-nothings”. She added that achieving net-zero goals should not include new fossil fuel projects such as the East African Crude Oil Pipeline, which will see the construction of an oil transportation route connecting Uganda to Tanzania.

Dohyeon Kim said that as a result of South Korea’s parliament not taking the youth seriously during climate crisis dialogues, the activists had withdrawn from the committee and were building an alternative, inclusive and democratic system.

“On 24 September, Youth 4 Climate Action Korea is launching a climate assembly for the people by the people,” said Kim.

“Those on the frontlines of climate change have been left unrepresented… the committee has continuously tokenised young people and has failed to come up with a concrete net-zero plan. We realised that it was simply not enough to have a seat at the table, but that we had to flip the table.

“Ordinary people just like me will get together to push our government to submit a more realistic NDC that will guarantee our survival on this planet,” the 17-year-old continued.

The activist said politicians in South Korea were speaking of cutting emissions by 35% by 2030 – a number Kim sees as timid and shameful.

Luisa Neubauer said the strike was in solidarity with those most affected by the climate crisis across the globe.

“We know that climate justice must always include the highest emitting countries and those responsible historically to pay their debt and rise up to the responsibility,” the 25-year-old German activist said.

Developing nations have previously pledged climate finance to the amount of $1-billion per year until 2020. However, these pledges have failed to materialise, leaving developing countries in the same position when it came to climate adaptation, while developed nations have made moves (though not enough) to combat the climate crisis.

Nakate said the financial climate pledges were a step in the right direction in terms of those countries responsible for the climate crisis being held accountable, but added that she was disappointed when those countries failed to deliver on their promises.

Thunberg said moral obligations were at the heart of the climate crisis and strikes, and questioned how developed nations that are more historically responsible were expecting developing nations to take climate action without financial obligations being met.

“Equity and justice must be at the heart of climate justice if we really want the Paris Agreement to work on a global scale,” Kim said, adding that climate finance is what makes the Paris agreement work globally.

“We need to see that action (financial climate pledges) come forward. But at the same time, we need to make sure our governments are able to make use of that climate finance. It makes no sense getting [those funds] and having corruption [squander] it. And that’s something we’ve seen in South Africa quite a lot – alongside money comes corruption,” Klaasen said. DM/OBP