Water and wheelbarrows: Crisis strikes in Limpopo after taps run dry despite billions spent on projects 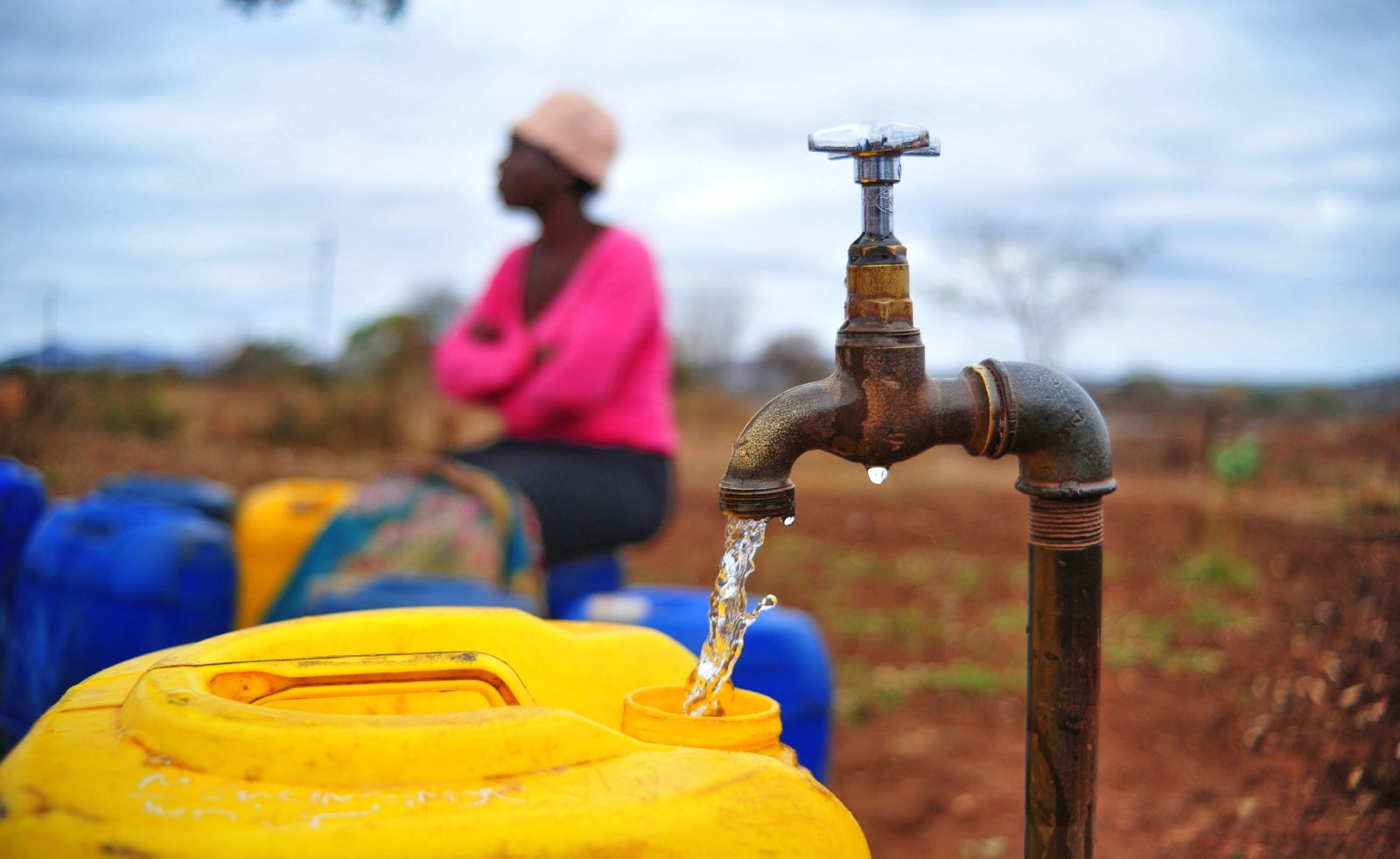 Many of the village residents have no taps in their homes, and those with the means either buy water from water merchants or spend thousands to drill boreholes on their properties.

Daisy Tshipfhango was irritated and spoke with much agitation as she waited her turn to fill up four 25-litre containers at a communal water tap in Nhlaneki village.

“I have been walking all morning to get here. I am tired, and I still have another long distance to walk pushing the wheelbarrow,” she said to voices of approval from the other women gathered around the tap.

“This thing [wheelbarrow] is too heavy. I have travelled a long distance from my home to get here. And then I still must walk up these streets again carrying water. I am tired of this,” lamented Tshipfhango.

She is one of millions of Limpopo residents, most of them based in rural villages, experiencing ongoing water shortages.

The shortages have been blamed largely on corruption and mismanagement in water boards and municipalities.

On 7 September Minister of Water and Sanitation Senzo Mchunu and his deputy, David Mahlobo, undertook a three-day visit to Limpopo to meet with municipal officials, management of water boards and community structures in a bid to address the water crisis.

Tshipfhango was not aware that the day before we met her, the minister and his team were right in her backyard, about 30km away in Giyani.

“What? The minister was right here? Had I known he was coming, I was going to find some money and take a taxi there to tell him how much we are suffering here,” she said.

So dire is the water situation in the province that households invest in wheelbarrows, which they use to carry containers to and from the communal water taps.

“You cannot even borrow a wheelbarrow from another person. If it breaks it will be a problem because everyone needs it,” said Tshipfhango.

The wheelbarrow, commonly used by builders on construction sites, has become a symbol of the province’s water crisis.

While in some villages people still use the donkey cart to transport water containers, the wheelbarrow has become a necessary possession in almost all households.

Old women, children and men of all ages are often seen behind these single-wheel tools in varying states of dilapidation.

The General Household Survey 2019 by Stats SA noted that access to water declined in five provinces between 2002 and 2019.

Stats SA also revealed that an estimated 44.9% of households nationally had access to piped water in their dwellings in 2019.

“A further 28.5% accessed water on site while 12.2% relied on communal taps and 2.5% relied on neighbours’ taps. Although generally households’ access to water improved, 3.1% of households still had to fetch water from rivers, streams, stagnant water pools, dams, wells and springs in 2019,” the survey found.

Limpopo Premier Chupu Mathabatha told a joint press briefing with Mchunu in Polokwane that the province was at 84% in 2014 for water provision.

“…and we are now down to 74% in 2019, which is a matter of serious concern. Our biggest problems are sources of water and reticulation, which is due to capacity within municipalities,” said Mathabatha.

The situation in the villages, where many people are unemployed and survive on subsistence agriculture, small business, the state’s social welfare grants and remittances from migrant workers, is dire.

The General Household Survey 2019 noted that the percentage of households and persons who benefited from a social grant had increased notably since 2003.

It further found that grants were particularly important as a main source of income for households, with Limpopo at 30.8%.

When Catherine Rikhotso, also of Nhlaneki village, heard water was flowing from the communal tap, she sprang into action.

She took her family of seven’s dirty clothes, piled them into a big metal bath, loaded them on to a wheelbarrow and headed for the outskirts of the village. There, she found a group of about a dozen women already waiting among lots of xigubus of varying colours, taking turns to fill up from a single tap.

“We are tired. This is a difficult life. I must do the washing here. There is no other way because we hardly have water,” said Rikhotso. Residents said there is no official system to notify them of the times and days when the taps would run.

Instead, they regularly send children to check on the taps and once water flows the village springs into action as information spreads by word of mouth.

Many of the village residents have no taps in their homes, and those with the means either buy water from water merchants or spend thousands to drill boreholes on their properties.

According to the General Household Survey 2019, Limpopo’s access to improved sanitation increased by 36.5 percentage points to 63.4%.

The survey noted that the “installation of pit toilets with ventilation pipes played an important part in achieving the large improvements.” On the northeastern side of Giyani, in the remote village of Khakhala located not far from the border with the Kruger National Park, Sibongile Tshabalala pushes a wheelbarrow from a communal water tap about 500m from her home.

“It is tiring. I must cook and wash for my family. At the end of the day my hands are tired, my body is tired,” she said, preparing to load two 25-litre containers on to the wheelbarrow.

Earlier that morning, 20km away in Giyani, Minister Mchunu held an imbizo with councillors, community representatives and other stakeholders to discuss the water problems afflicting villages like Khakhala. The village, which falls under the Greater Giyani Municipality, is among 55 settlements experiencing chronic water shortages.

Lepelle Northern Water, the water authority in the area, has spent R3.3-billion in the past seven years on a water project that remains incomplete.

Residents like Tshabalala didn’t know about Mchunu’s engagement with stakeholders that day.

The Greater Giyani Water and Sanitation Community Forum said in its presentation to Mchunu that the desired scope of the water project, which was started in 2014, included the rebuilding of a 325km pipeline to reach 55 villages.

It also included the building of 50 distribution reservoirs to reticulate all 55 villages; the construction of a 35-megalitre command reservoir; and the repair of the new nine-megalitre plant in Nsami.

The forum reported, however, that none of this had been completed.

The Vhembe Water and Sanitation Community Forum said one of the challenges contributing to water shortages was the selling of land to communities in wetlands and water catchment areas.

The forum also pointed an accusatory finger at community members for carrying out illegal water connections from existing infrastructure.

Residents of Khakhana, which is located just 11km from the Nsami Dam and the water treatment works plant meant to supply them with water, say they sometimes go for two weeks without water.

The communal taps that served their villages before the R3.3-billion stink have long since dried up. The Greater Giyani Municipality has installed communal water tanks in some areas. Some of the tanks draw water from boreholes. However, residents say these don’t always work.

“It has been a long time [since] we have had water. We are told some of the pipes are broken and some are blocked. We are suffering. We cannot even plant vegetables because there is no water,” said Olga Mthombeni, also of Khakhala.

Mchunu said the department will go after those implicated in the misspending of the funds meant to bring water to the villages.

“Every cent of this R3.3-billion will be fully accounted for,” he said.

“We will be asking aphi amanzi, iphi imali? [where is the water, where is the money?],” Mchunu said.

The Greater Giyani ward 25 councillor, the popular musician and television personality Penny Penny, expressed the community’s frustration over the long struggle for water.

“Minister Mchunu, come with magic, come with something to bring about change,” he said, highlighting that more than three ministers had come and gone, yet the taps remained dry.

“Councillors are given a hard time in communities because we are unable to provide water,” said Penny Penny, whose real name is Gezani Nkovani.

Mchunu said the project was initially undertaken without a budget and proper scoping, which saw the costs escalating to R3.3-billion. He said Lepelle Northern Water has indicated the project is now at 48% completion and would eventually cost R4.1-billion.

“It should not have taken us this long [to complete the project],” he said, citing lack of accountability for the chaos.

“Lepelle [Northern Water], look at yourself, your armpits are smelling, and we are beginning to smell like you,” Mchunu said in isiZulu during the meeting with stakeholders. Mukurukuru Media/DM168