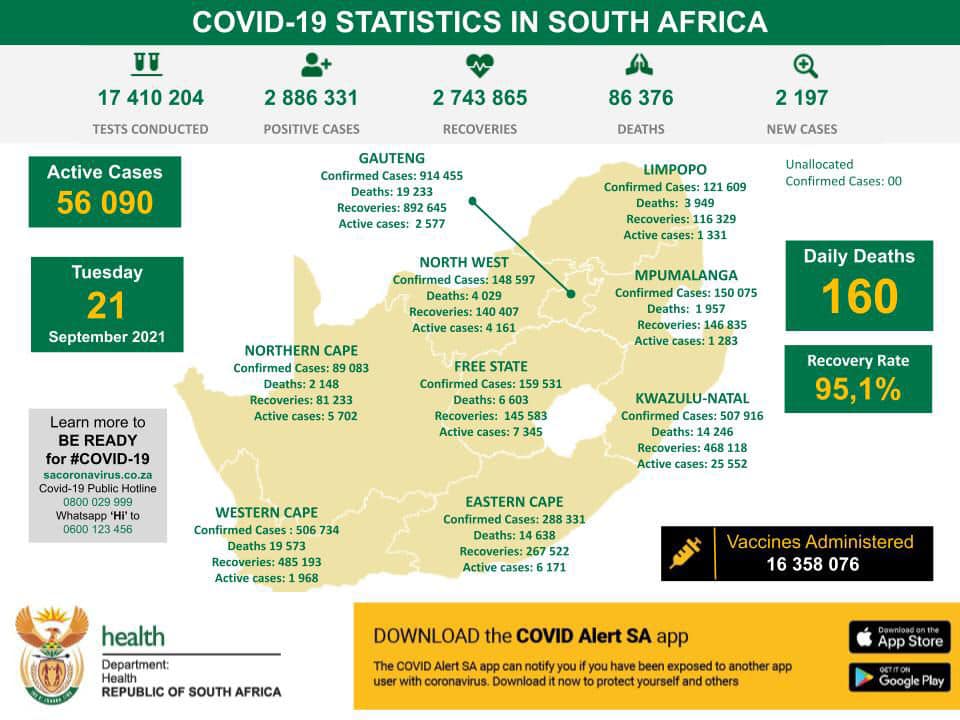 The head of the United Nations called global vaccination inequity “an obscenity” as US President Joe Biden was set to announce an order of 500 million doses of Pfizer’s shot for export to the rest of the world.

A booster dose of Johnson & Johnson’s vaccine provided 100% protection against severe disease when given two months after the first one in a trial. The Food and Drug Administration is expected to decide as soon as Wednesday on a recommendation for boosters made by Pfizer and its partner, BioNTech.

Chinese officials shut down the northern city of Harbin after a single patient was hospitalised with Covid-19, suggesting a spread beyond the epicentre of the latest Delta outbreak. The city reported three confirmed cases as of 6pm local time.

US to buy 187 million rapid tests

The federal government is spending nearly $1.2-billion to purchase 187 million rapid Covid-19 tests from Abbott Laboratories and Celltrion, according to a US Department of Health and Human Services official.

The deals, which include options to buy more, are part of an investment of about $2-billion announced by the Biden administration earlier this month to make the rapid tests more widely available. The government is also using the Defense Production Act to build out manufacturing capacity.

The products, known as antigen tests, return results in about 15 minutes on-site, without needing to be sent out to a laboratory. Demand for virus tests, including the rapid products, has surged amid the latest wave of Covid-19 in the US.

An aircraft flown by a US carrier is “an incredibly safe place to be” during the coronavirus pandemic because of stepped-up air filtration and cleaning measures, and mask requirements, American Airlines Group Chief Executive Officer Doug Parker said on Tuesday.

“We don’t see the need to require people to be vaccinated to travel within the United States, simply because it’s a much safer place to be” than other areas where people congregate, he said in an interview with The Washington Post. The carrier will abide by any such mandate if one is issued by the Biden administration, Parker said.

Wyoming Governor Mark Gordon called up about 95 members of the state’s National Guard on Tuesday to supplement hospital staff in 17 communities as the coronavirus rages.

“There are approximately 200 people with Covid-19 in Wyoming hospitals today, which is near the peak number the state has seen during the pandemic,” the governor’s office said in a statement.

President Joe Biden plans to announce an order of 500 million doses of the Pfizer-BioNTech vaccine on Wednesday, according to two people familiar with the matter, as the president looks to increase donations of shots abroad and ward off criticism about US plans for boosters.

Negotiations between the administration and manufacturers are continuing but a deal is poised to be unveiled at a virtual vaccine summit, said the people, who asked not to be named ahead of the announcement.

UN chief gives the world an ‘F’ on vaccine ethics

The world has passed the science test on the coronavirus but gets an “F in ethics” due to an inequitable vaccine roll-out, said United Nations Secretary-General António Guterres.

Addressing the 76th session of the UN General Assembly in New York, Guterres told world leaders that the planet “must wake up” as it faces the “greatest cascade of crises in our lifetimes,” including Covid.

Guterres said the pandemic had “supersized glaring inequalities” and criticised the inequitable distribution of vaccines, highlighting that wealthier countries had been vaccinated against Covid while 90% of Africans were still waiting for their first dose.

“This is a moral indictment of the state of our world,” said Guterres. “It is an obscenity. We passed the science test, but we are getting an F in ethics.”

Mauritius will offer booster shots starting on September 23 to people who received double doses of the Sinopharm vaccine to avert future coronavirus surges.

The Food and Drug Administration is expected to decide as soon as Wednesday on a recommendation for Covid-19 boosters made by Pfizer and BioNTech, two people familiar with the matter said, the latest step in a process that could open the door to extra shots in the coming days.

The agency’s decision would tee up consideration by an advisory panel of the Centers for Disease Control and Prevention, which has scheduled a meeting for Wednesday and Thursday to discuss boosters.

On Friday, an FDA advisory panel rejected a call for boosters for all adults, instead deciding to urge them for a narrower group: people 65 and older, those at risk of severe Covid-19 and those at risk of occupational exposure. Those parameters could be tweaked by the FDA.

“We’re going to do that a little bit longer,” Lamont said in a Tuesday interview on Bloomberg Television. “I got to work with my friends in the legislature on that.”

One case was discovered through testing, while the other two are close contacts and also recently returned from the Philippines. The city had already shut mahjong places, bathhouses, cinemas, massage parlours, arcades, religious venues and indoor sporting venues earlier on Tuesday.

Finland’s government proposed establishing a Covid-19 passport for people as young as 12 as an alternative to some restrictions. Restaurants, gyms, museums and nightclubs could require patrons to present a passport showing they have been inoculated, have a recent negative test result or have recovered from the virus.

Poland to offer boosters for over-50s

The Polish government approved booster shots with the Pfizer and Moderna vaccines for people over 50 years old, as well as for those with immune deficiencies, Prime Minister Mateusz Morawiecki said at a press conference in Warsaw.

Prince Harry and Meghan, the Duke and Duchess of Sussex, will join an event in New York’s Central Park on September 25 to spur support for global vaccine equity, the international advocacy organisation Global Citizen said in a statement. The campaign is calling for the Group of Seven and the European Union to share at least one billion doses immediately with needy countries, it said.

Others due to appear as part of the broadcast event include World Health Organization Director-General Tedros Adhanom Ghebreyesus.

Romania, one of the least vaccinated EU nations against Covid-19, might need to double its existing number of intensive-care beds for virus-related patients to about 2,000 after new cases spiked to the highest level this year, Premier Florin Citu said on Tuesday.

About 1,000 people are currently hospitalised in ICUs and the government is supplementing the beds on a daily basis. The country reported its highest number of deaths in the past three months on Tuesday.

Romania also plans to start offering a third dose of the vaccine earlier than planned, according to Valeriu Gheorghita, the head of the government’s vaccination task force.

Undocumented migrants admitted to US will need shots on US arrival

Undocumented migrants admitted to the US on humanitarian grounds would have to be vaccinated on arrival under new rules, Reuters reported, citing a planning document.

A booster dose of Johnson & Johnson’s Covid-19 vaccine provided 100% protection against severe disease when given two months after the first inoculation, according to widely anticipated data that suggests it increases the potency of the one-time shot.

The booster was 94% effective at preventing symptomatic infections in the US portion of the Phase 3 trial, and 75% effective overall when it was given 56 days after the initial dose, the company said in a statement. A second study found the additional shot spurred a 12-fold increase in production of antibodies against Covid when it was given six months after the first.

Iran lowered its minimum age for vaccination to 18 on Tuesday, the state-run Islamic Republic News Agency reported, citing a statement from Health Minister Bahram Einollahi. Some 45 million shots have been administered in Iran, with more than 14 million people having received a second dose. DM