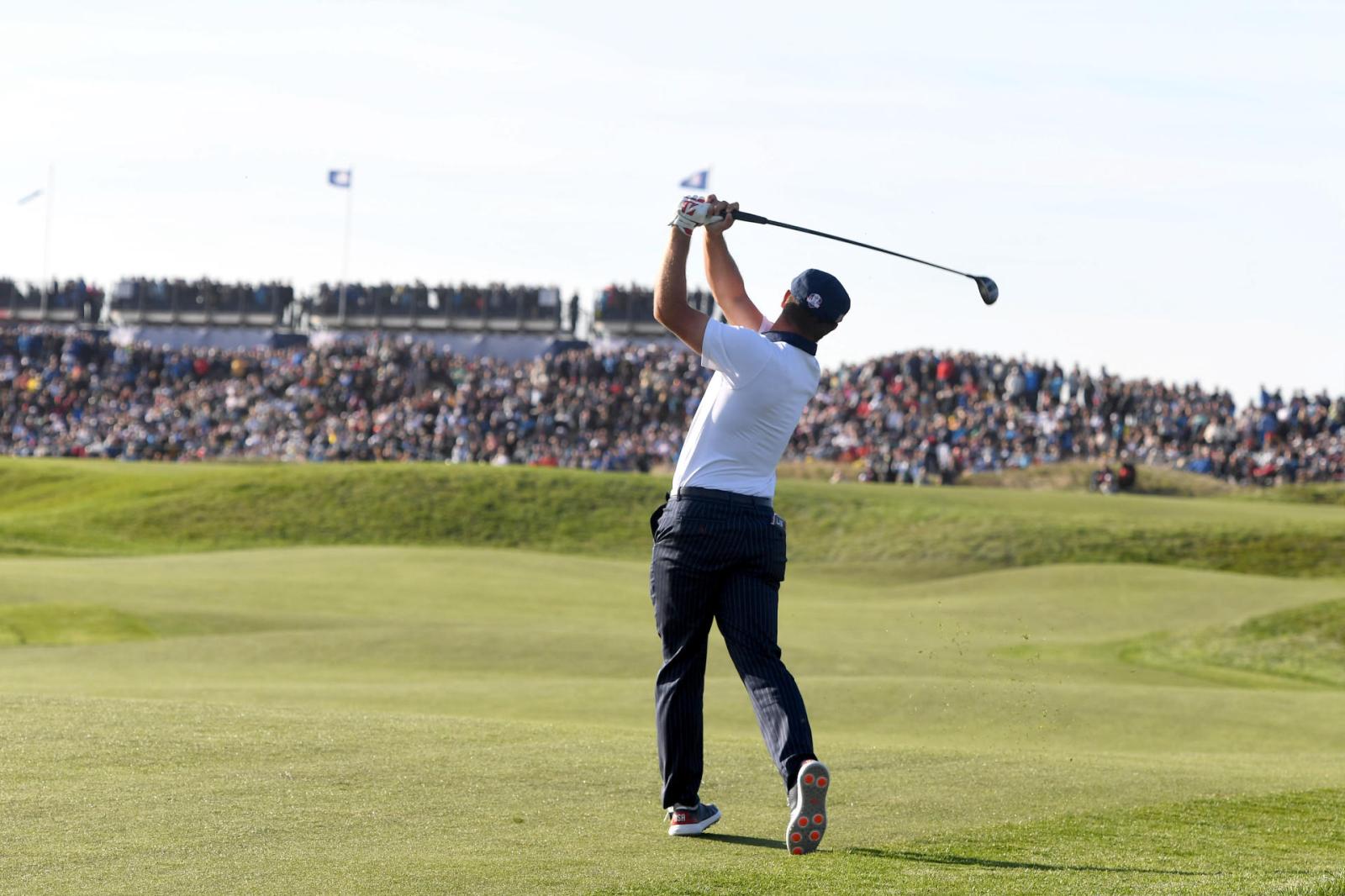 Bryson DeChambeau of the US plays a shot from the fairway on the 14th hole during the 2018 Ryder Cup at the Golf National in Guyancourt near Paris. (Photo: EPA-EFE/Gerry Penny)

The Ryder Cup does not begin until Friday, but the gamesmanship was well under way at Whistling Straits on Monday as European captain Padraig Harrington and his US opposite number, Steve Stricker, put their poker faces on, refusing to show their hands.

Players will spend the next three days getting a feel for the rugged layout that hugs the Lake Michigan shore, with practices providing an endless source of speculation over possible pairings until all is revealed by the two captains before Friday’s opening session.

“That’s your job in the media is to make a story out of it,” said Harrington. “I’m not going to say what it means or what it doesn’t mean (players practising together).

“I do have ideas about what should be happening in practice, but it’s for you to figure it out, not me to tell you.”

Knowing much will be read into everything from players sharing a practice to sharing a laugh, Harrington and Stricker offered little in the way of hints but both admitted to well-developed strategies.

“We’ve got a really good, sound game plan already in place,” said Stricker. “But again, there’s always little things along the way that can creep up, anything.”

The spotlight is going to be on feuding US teammates Bryson DeChambeau and Brooks Koepka and how Stricker handles the big hitters with bigger personalities.

Harnessing negative energy and turning it into a positive force has been tried before and failed miserably when US captain Hal Sutton partnered bickering Tiger Woods and Phil Mickelson in the 2004 Ryder Cup and flopped, failing to win a point.

But despite the frosty relationship Stricker would not completely rule out the possibility of sending the two out together as the US tries to win the biennial event for just the third time in 10 tries.

“They have assured me it’s not going to be an issue,” he said. “I have no worries whatsoever.

“Will we pair them together? I don’t think so at this point, but things could change. Could always happen.”

Before Stricker decides who might partner Koepka he will have to determine if the world No 10 is fit to play after injuring his wrist earlier this month during the Tour Championships.

Stricker said Koepka had assured him he was good to go but he would be keeping a close eye on practice.

“I’ve been talking to him ever since it happened. Check in with him every couple of days. He tells me everything is 100% and everything is ready and raring to go.”

The Americans will have six Ryder Cup rookies on their 12-man team who will strive to reclaim the trophy against a close-knit and battle-tested European side who have mostly dominated the biennial match-play competition over the past four decades.

Despite a slew of new faces, the US team does not lack for talent, given an average world ranking of nine compared with 30 for Europe, but American struggles to play as a unit at the Ryder Cup have become an all too familiar refrain.

“The fact that the Americans have only won five times in 38 years has us all wondering can this juggernaut of an American team… beat that team,” NBC Sports golf analyst and former US Ryder Cup captain Paul Azinger said.

The narrative that the Americans lack the chemistry enjoyed by Europe is likely to remain a common theme this week, perhaps even more given Koepka told Golf Digest the Ryder Cup threw off his routine and that he might not be cut out for team sports.

Even if the US team are able to find the right formula and silence questions about chemistry, they will still have their work cut out against opponents who have managed to consistently form a cohesive unit and typically thrive in the team format.

“Look, I’ll believe this forever – the Europeans are bonded by blood. They’re bonded naturally. This means everything to them,” said Azinger. “It’s sad really that this American side has gotten beaten like that, but [Europe] bring an intangible with them. It’s a fact.”

Europe will have seven returning players from the 2018 team who triumphed in Paris, led by Spanish world No 1 Jon Rahm, Northern Irishman Rory McIlroy and Englishman Tyrrell Hatton, their only top-20 representatives along with Norway’s Viktor Hovland.

Also in the team are Spaniard Sergio Garcia, a veteran of nine Ryder Cups and Europe’s all-time leading points scorer, and Englishman Ian Poulter, who is known as “the Postman” given his knack for delivering crucial points in the competition.

Still, despite being the defending champions and having five players with four-plus Ryder Cup appearances, Europe are again being perceived as clear underdogs due in part to the current form and lofty ranking of their opponents.

“The European side seems to take this underdog role and mentality and use it to their advantage, whether they’re playing at home or in the US,” said NBC Sports analyst and former US Ryder Cup player Justin Leonard.

“With that comes a sense of freedom, of, well, we’re not really expected to win, so let’s go out and play freely. And I think you see that time and again at every Ryder Cup.”

Europe will undoubtedly face a challenging task on American soil where the US have lost only four times since the matches began in 1927.

The Americans took a recent trip to Whistling Straits, a links-style layout sculpted along 3.2km of Lake Michigan shoreline, to get a feel for the setup, but Azinger said Mother Nature could make for a much different course this week.

“If the wind blows, I think they’re going to lose any advantage, really mainly on the greens,” he said.

“Everybody can handle the wind tee to green, but on the green somehow Europe makes all those putts in the wind.” DM/Reuters