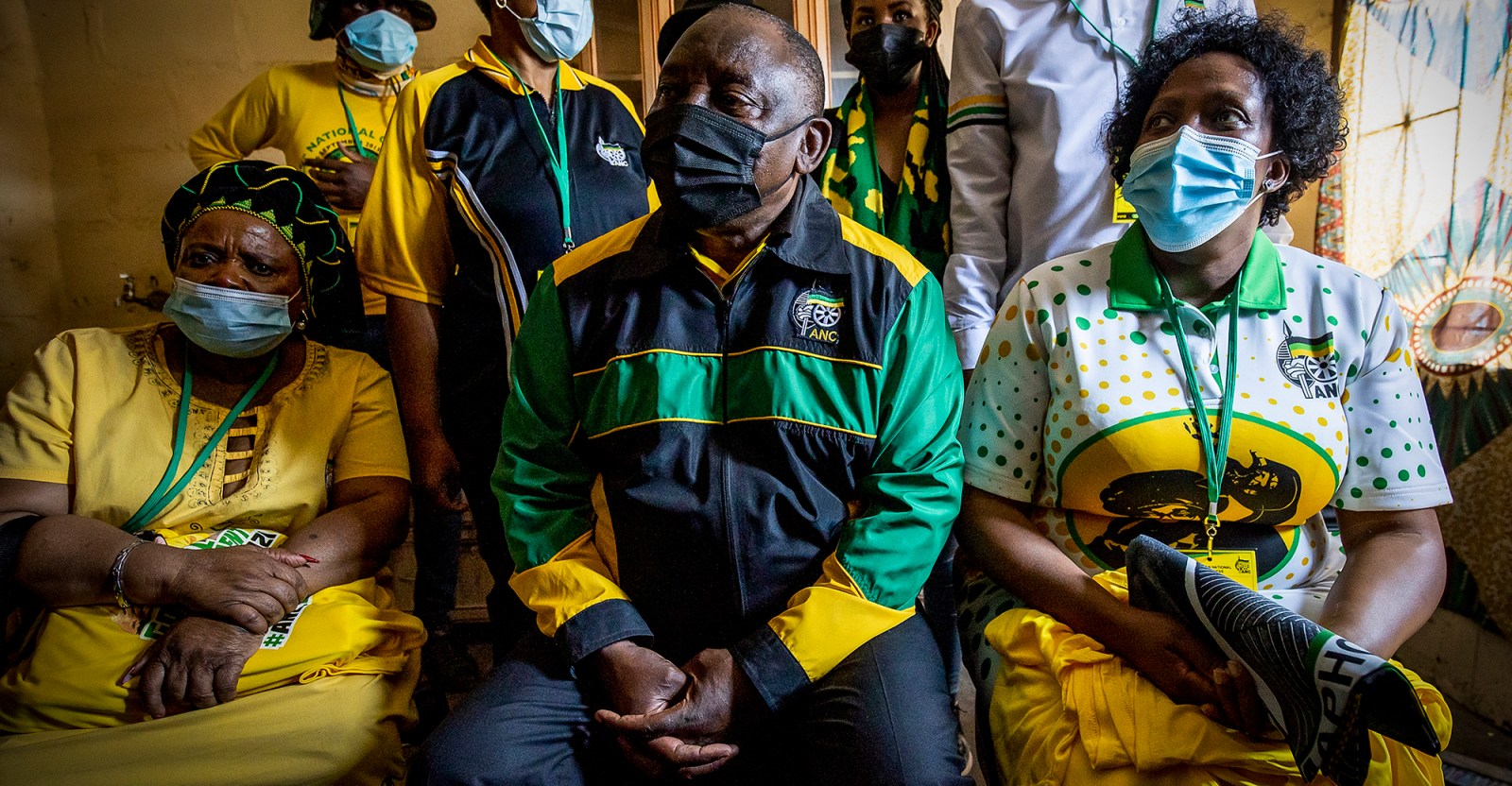 President Cyril Ramaphosa has attempted to deal with voting hesitancy by telling those planning to boycott the ANC and the elections to go and vote – for any party.

“I need you to be the one who will get more involved,” President Cyril Ramaphosa told disillusioned communications and psychology graduate Chantel Mthethwa (26) during the ANC’s door-to-door elections campaign in Tekwane South in Mbombela Municipality in Mpumalanga. “I don’t need you to say, ‘I am not going to vote’,” he said. ”I don’t care who you vote for, but you’ve got to exercise your right and say, ‘I am going to make my mark because I want to make a difference’.”

He also told her to be an active citizen and use her university education and the experience she had as leader on the students’ representative council to get involved in the community and raise awareness about issues such as the nearby bridge that washed away in floods in April, and drug abuse.

This, he said, could be done in organisations outside of party politics.

Ramaphosa chose to spend Sunday, the second day on the ANC’s campaign trail ahead of the 1 November local government elections, in Mbombela. The day before he was in his home city of Soweto, where the biggest issue in the communities he visited was a lack of electricity. All these communities are safely in ANC hands.

The past weekend was also the Electoral Commission’s only voter registration weekend ahead of the elections, although online registrations are still possible until midnight on Monday.

Mthethwa’s reason for not voting was that she felt let down by politics:

“There are really discouraging things which are making me really sceptical to vote this time around.”

These issues relate to jobs, unscheduled power cuts, and high levels of drug abuse and crime in the community. One big dream Mthethwa had was “to be something in the community”, but so far her search for a job to help her realise this dream has come to naught.

“We go to other provinces to study further, with the hope to come back and serve in our provinces, but I feel like we are not afforded enough opportunity – with no communication [and feedback from prospective employers] – when we try to apply,” the North West University graduate said.

“I don’t want to say that I lost hope, but I feel like when you are not politically advantaged, when you are not known in the political side of things, then there are no chances for you, which is really discouraging. I don’t know how to address those issues.”

Ramaphosa told Mthethwa the government was doing what it could to create job opportunities for young people. “I want to assure you that this thing of saying that there are people who are politically connected who get jobs, if it has happened in the past – no more!” he said.

Tekwane South (Ward 18), a low-income community consisting mostly of government grant recipients, where Mthethwa lives with her mother and one-year-old, is a safe ward for the ANC. In 2011, when 55% of the registered voters came out to make their cross, the party got 80.41% of the votes, but five years later, when turnout increased to 62.6%, the ANC’s support dropped to 79.84%. The Economic Freedom Fighters, the second largest party, had 12.7% of the vote in the last local government elections in 2016.

Residents who came to see Ramaphosa said they would rather not vote at all than to vote for a party that is not the ANC, although they said the fights between the different factions of the party made their lives hell. One of the women, in tears, told Ramaphosa that organisers from the dominant camp were threatening to beat them for protesting about the nomination of the ANC’s candidate for the ward, which they said was not the popular choice but a “corrupt” one.

Later in the day Ramaphosa addressed a small gathering at a mosque in the mostly Indian community of Valencia Park (Ward 17) in Mbombela Municipality, where the men were allowed in the room with him, while the women had to sit in a room on the second floor, out of view where they could only hear the president speak.

Ramaphosa had a more certain message about who members of this community should vote for, even though opposition voters are in the majority.

“We are saying to all of you, come out in your numbers and vote for the African National Congress,” Ramaphosa told the men. “The question I want to pose is, if not the ANC, then who else? Sit back and think, if not the ANC then who else has the capacity, has the better potential to run this province, to run this local government?”

He said the ANC was the only party with clear plans. “The majority of people in the province are going to vote for the ANC anyway, let’s join the majority, be part of this movement that we are forming,” he said, urging people to become active citizens.

Mpumalanga is possibly the ANC’s safest province at present, and the party is in charge of all the municipalities here. The ANC faces an uphill battle in this ward, though, as it has traditionally always been in opposition hands. The DA had 72.5% of the votes here in 2016, but it was, in a deviation from the party’s national trend that year, almost eight percentage points down from what it was in 2011. Despite a rebellion nationally against the ANC due to former president Jacob Zuma’s leadership in 2016, the party’s support here rose with about three percentage points to 19.4% compared to 2011.

Voter turnout here has been fairly steady and was close to 65% in the last local government elections. A staunch ANC supporter who comes from an ANC family, but who didn’t want his name to be mentioned, said he usually votes for the ANC, and that the majority of those who came to the meeting in the mosque were ANC voters. He said he’s feeling more hopeful than he did five years ago that things, such as corruption and the crumbling infrastructure of municipalities, will improve.

“He’s trying, but it’s very difficult for him,” he said about Ramaphosa’s efforts to renew the ANC and fight corruption in the country. “It’s a slow process, considering what’s happened in the past. It’s an uphill battle for him, but we wish him well.” DM