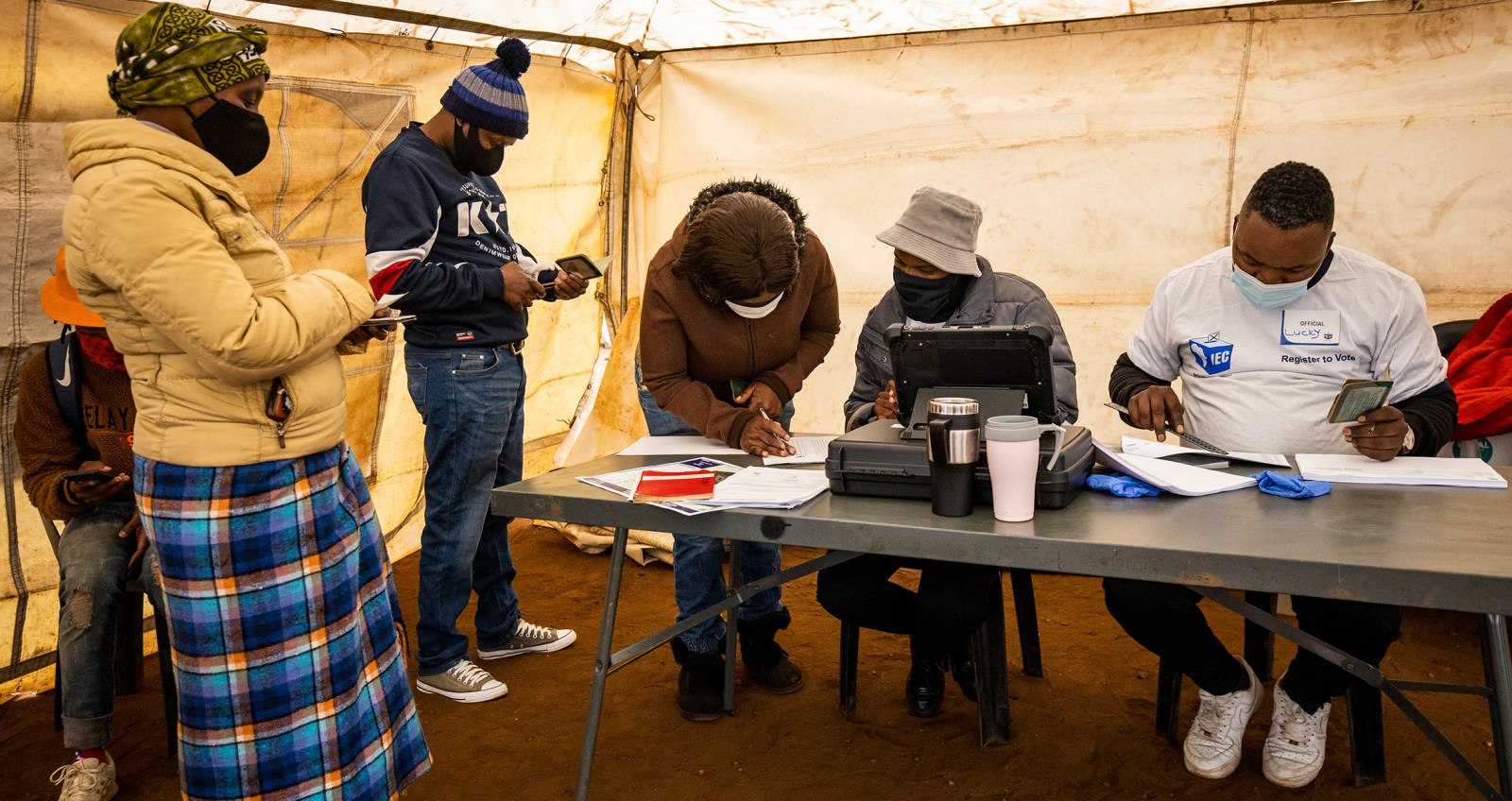 From Johannesburg to Durban voter apathy was a dominant feature over the local government election voter registration weekend.

The IEC said that on Day One of the registration weekend, some 598,000 people had registered for the upcoming polls. By Sunday morning, nearly 30,000 had registered, with the commission expecting a spike in numbers later.

Lucia Zaca, an ANC party agent in Ward 78 at K section Umlazi said they were concerned that there were fewer people coming in to register or to check if they were registered.

When Daily Maverick visited the KwaMgaga hall site on Sunday, she said they were hoping the numbers would pick up.

“On Saturday people did come to the centre, but there were not as many as we had expected. We are hoping that we are going to get more people coming in today. We are also seeing more women coming than men,” she said.

“We are hoping that those who have not come through know that they are registered. But we do understand that some people are disgruntled and have lost interest in voting,” she said.

According to the 2011 census, Umlazi has a population of over 400,000, the majority of whom are isiZulu-speaking.

Sifiso Ntombela (54), who went to check if he is registered at the site, said he was still “considering whether to vote or not”.

Ntombela, who lives in an RDP house at K section Umlazi, says he is not happy with the way the ruling party has governed. He has never had permanent employment.

“I’m not happy about a lot of things. I’m not sure why I would need to vote because even now I have nothing,” he says.

Ntombela, who is epileptic, says he is not treated well at hospitals and other government departments, and that these are signs of poor governance.

Thembinkosi Dlamini (33) said he was not planning to vote and didn’t see the need to register or check if he was registered. He said he did not vote in the last elections in 2019.

“Where I stay, there is a passageway we use to get to our homes. It was built but not finished. I’ve often told the councillor in our area to come by and see how people suffer when it rains. Our mothers and grandmothers have to walk on it when it’s slippery,” said Dlamini.

The IEC officials at the site said the turnout was lower than they had expected. Hlengiwe Ngcobo, an IEC official at the site, said they  hoped the numbers would pick up when later in the afternoon

Nkosinathi Mseleku, an IEC official, at the Ganges Secondary registration site, south of Durban, said they were getting low numbers of people coming through to register and check if they were registered.

Sohail Ramkhelawan, a DA party agent in the area, said he thought part of the reason for the low registration turnout was that some people knew that they were registered and others were registering online.

Action SA KZN leader Makhosi Khoza said she believed that some people are feeling intimidated after the recent shooting outside Buhlebethu Primary School in Inanda. Speaking at a registration site in Albert Park in the Durban CBD, she said registration was slow on Saturday but they were hoping that it would pick up on Sunday.

“People are very scared in KZN and we are trying to encourage them to go and register nonetheless, but obviously if something threatens your life it’s very difficult because you can’t buy your life back,” she said.

IEC official Londiwe Tambo said that on Saturday 90 people visited the site to register and check if they were registered.

Devin Govender, from Chatsworth, said he did not believe in voting. “I don’t believe in whatever the government does. Once you put the parties in positions and seats in Parliament they forget about the people,” he said.

Xolani Msibi (44) from Umlazi said he went to check if he was registered and was happy to find out that he was still registered. Msibi said he believed that voting was his right and he wanted to exercise this choice.

In Soweto, where Cyril Ramaphosa launched the ANC’s election campaign on Saturday, Nosihle Mkhulise, an ANC member in Protea South Ward 10, said she was looking forward to improvements in the area, especially regarding unemployment.

“People’s diplomas and degrees are gathering dust. We also want proper houses, not the shacks we are stuck in,” said Mkhulise.

Meanwhile, the EFF’s Walter Skyman said: “We have a big chance of emerging victorious come election day in October. The big elephant, ANC, is largely divided,” while campaigning in Protea South’s Ward 10.

Daily Maverick also caught up with Sizwe Bhembe, 42, ANC councillor candidate for Ward 17 consisting of Waterworks, Zuurbekom and Ezulwini in the south of Johannesburg. He promised to prioritise the speed of service delivery.

“As you can see, here in Zuurbekom street lights are lacking,” said Bhembe. He said this was a problem because criminals operated more freely under the cover of darkness. He also promised a high school in the area.

“The issue of housing is also another problem. Like in many other communities around the country, housing has been an issue in the three areas under Ward 17. Aggrieved community members often protested the lack of service delivery. At times these would escalate to violence and criminality but things have hardly changed much over many years.

“We have a huge backlog,” Bhembe admitted.

Rahaba Ngwenya (59) arrived at the Zuurbekom registration centre with her daughter. They were the only people who registered while Daily Maverick was there.

“I am registering to vote because the municipality worked for me,” said Ngwenya.

“I also want to have a word in, I want to have a say,” Ngwenya’s daughter said. The family said they were new in Zuurbekom and had migrated from the Free State.

“We came to register to vote because we have just moved to Killarney,” said an elderly couple.

“You cannot mourn if you do not register and vote,” said 36-year-old Christo Wessels as he gathered his golf gear to go play. Wessels said he was registered and was only there to play golf.

Aaron Ngwetjana (59) arrived at the registration centre in high spirits. He said  by registering he was fulfilling his duties as a citizen.

The most notable difference between places like Alexandra and Protea South and Zuurbekom and Killarney was that none of the people registering in Killarney bemoaned the lack of service delivery and jobs.

In Alexandra, an elderly woman who refused to provide her name said she was not expecting much from the government. Despite being one of the city’s oldest areas, people in Alexandra have to endure deplorable living conditions.

The decline in Alexandra is often credited to corruption involving the controversial Alexandra Renewal Project (ARP).

Bheki Vilakazi, a 40-year-old Action SA member, said he registered to vote for his party because he was fed up with the lack of change.

At another registration centre in Alexandra, resident Sandiso Sinto, an unemployed father of two, came to check if he was registered.

“There is no work, no roads, corruption is rife… murders by our trusted black leaders. I had vowed never to vote again but I’m desperate for change,” he said.

“All these years I was voting for the ANC but I’m disappointed. When you look for work, they tell you that you are old and young people need jobs. But we also do not qualify for old-age grants. Those of us 35 years of age and older are in a huge jobs dilemma; we don’t know how we will escape. How is it that they say we are old yet we don’t qualify for old age grants?

“We are struggling. Monies are embezzled by our fellow black leaders. You cannot take kids to university with money from selling tomatoes.” DM