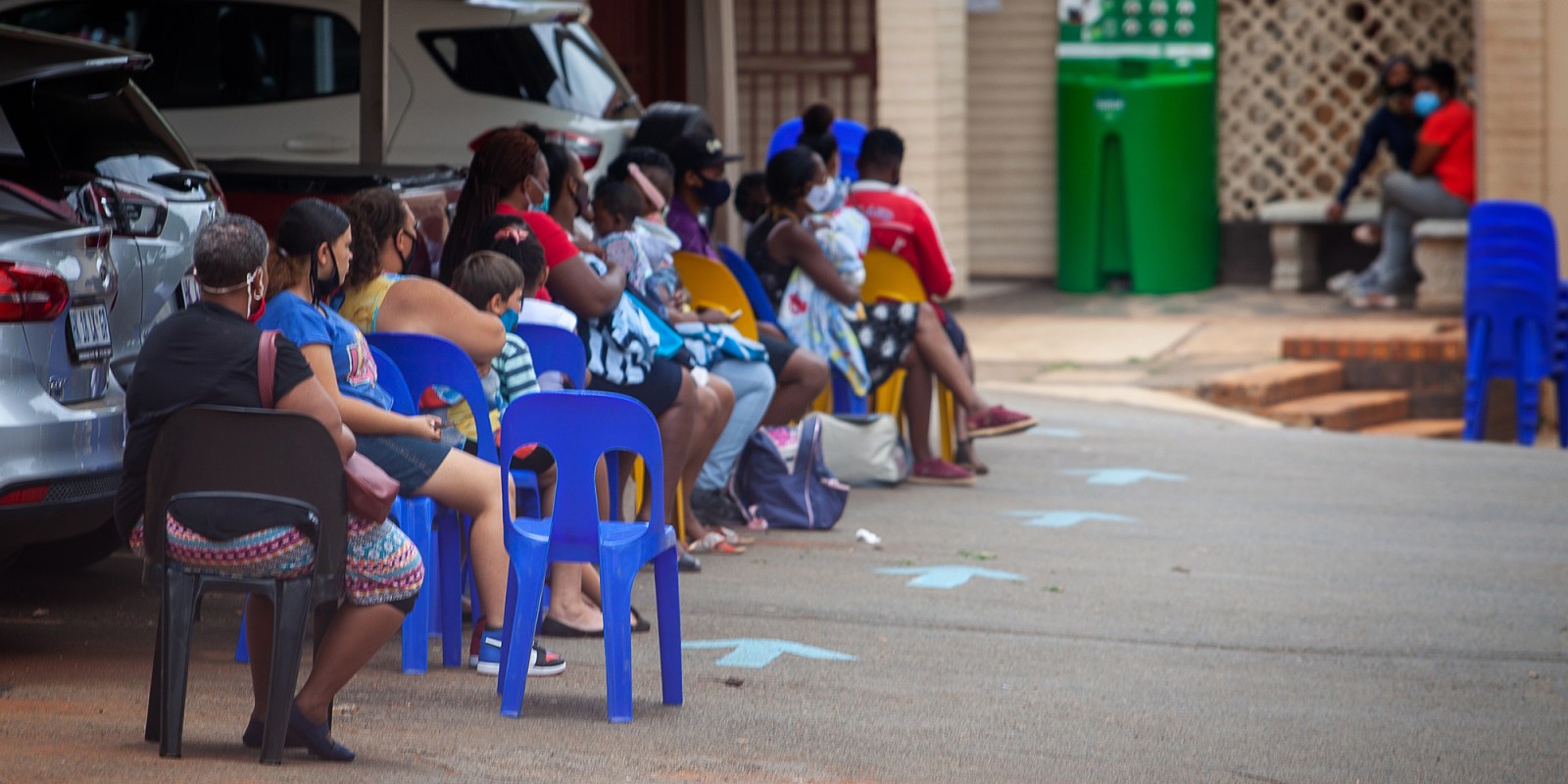 According to the study, self-reported health status has worsened since 2017/18, with 12% of residents reporting poor or very poor health in 2020/21. Figures are highest for women (15%) and black African respondents (13%). Similarly, mental health problems have also worsened, with 14% of respondents at high risk of depression in 2020/21. These levels are highest for those experiencing food insecurity (36%), black African respondents (15%) and women (15%).

The GCRO’s Quality of Life (QoL) Survey series provides regularly updated insights into socioeconomic circumstances, levels of satisfaction with services and government, sociopolitical perspectives, psychosocial attitudes and other related characteristics of adult residents of the region.

The QoL Survey 6 (2020/21) was conducted from October 2020 to May 2021. The survey results give insights into the direct effects of the Covid-19 pandemic on health and wellbeing in the province. Compared with data from earlier survey iterations, it is possible to explore trends and changes over time. The results show serious declines in self-reported health status and mental health over the past two years, along with growing dissatisfaction with the public healthcare system.

The Covid-19 pandemic has exposed and deepened persistent inequalities and gaps in healthcare systems globally. In Gauteng, and in South Africa as a whole, a well-resourced private healthcare system serves a relatively small proportion of the population who can afford to pay, while an underresourced public healthcare system provides care to the majority. Nearly 16 million people live in Gauteng, South Africa’s economic hub. QoL 2020/21 results show that 66% of Gauteng’s adults make use of public healthcare facilities – up from 63% in 2017/18, and 60% in 2015/16. This increase appears to be driven primarily by a decrease in people making use of a combination of public and private facilities. 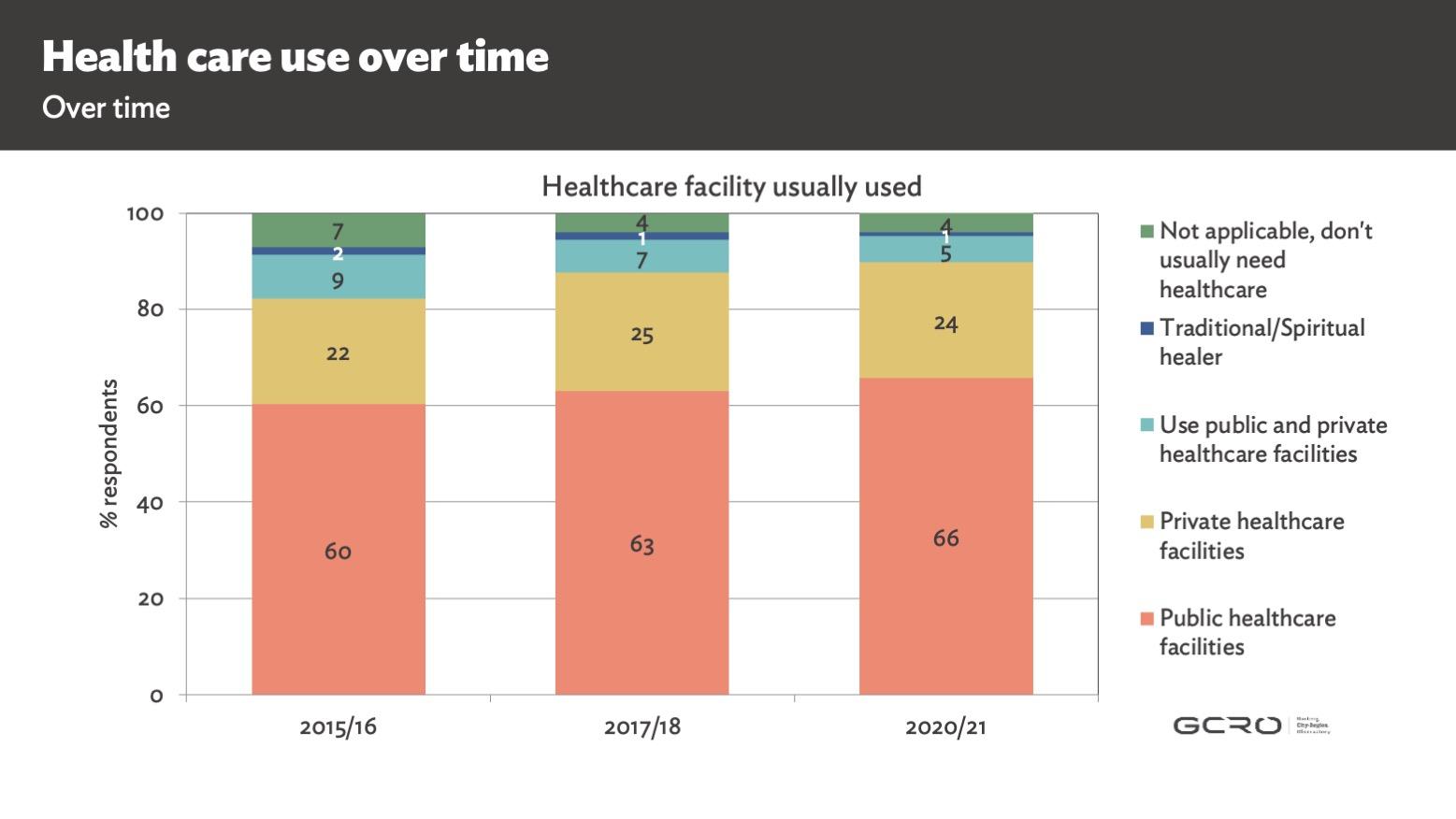 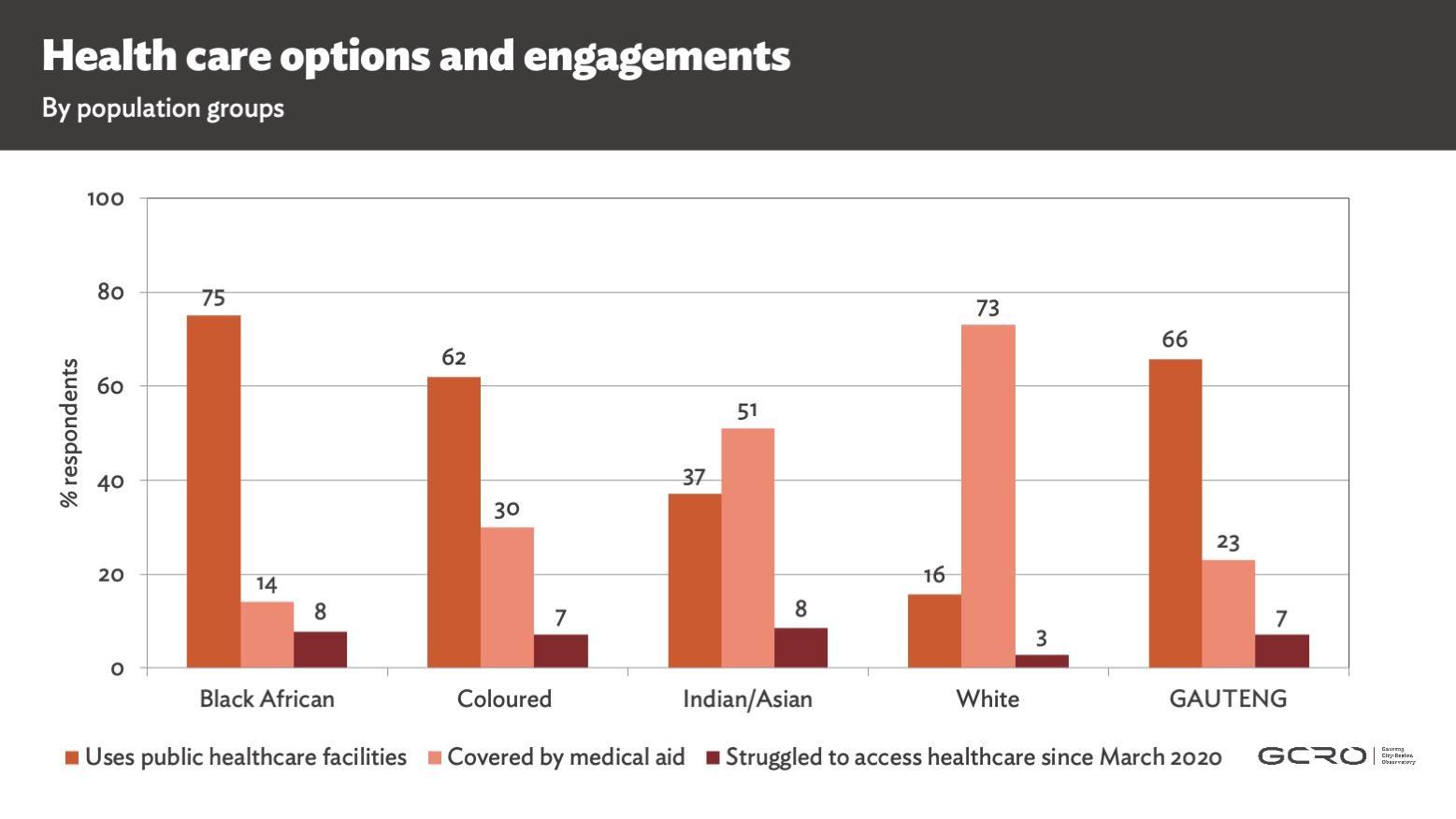 QoL 2020/21 data found that 7% of respondents indicated that they had struggled to access healthcare in the period since March 2020. Again, difficulty accessing healthcare is not evenly distributed across the population. While 8% of black African and Indian/Asian respondents experienced this, only 3% of white respondents did. In addition, 8% of women have struggled to access healthcare since March 2020 compared to only 6% of men. Difficulty accessing healthcare is even more strongly connected to the sector of healthcare used: 9% of those using public healthcare services experienced this, compared with only 2% of those using private healthcare services. While section 27 of the South African Constitution guarantees a right to access healthcare, the public healthcare system is not able to meet the needs of Gauteng’s residents. This likely reflects a combination of the additional demands Covid-19 has placed on the system, a steadily increasing proportion of a growing population making use of the system, resource and capacity limitations, and poor service delivery and management.

Unsurprisingly, QoL 2020/21 data also reflect that self-reported health status and mental health have continued to worsen since 2015/16. While our data cannot assess causality, it seems likely that this relates to both the direct impact of the pandemic on health and healthcare systems, and to growing socioeconomic distress and hunger in Gauteng. 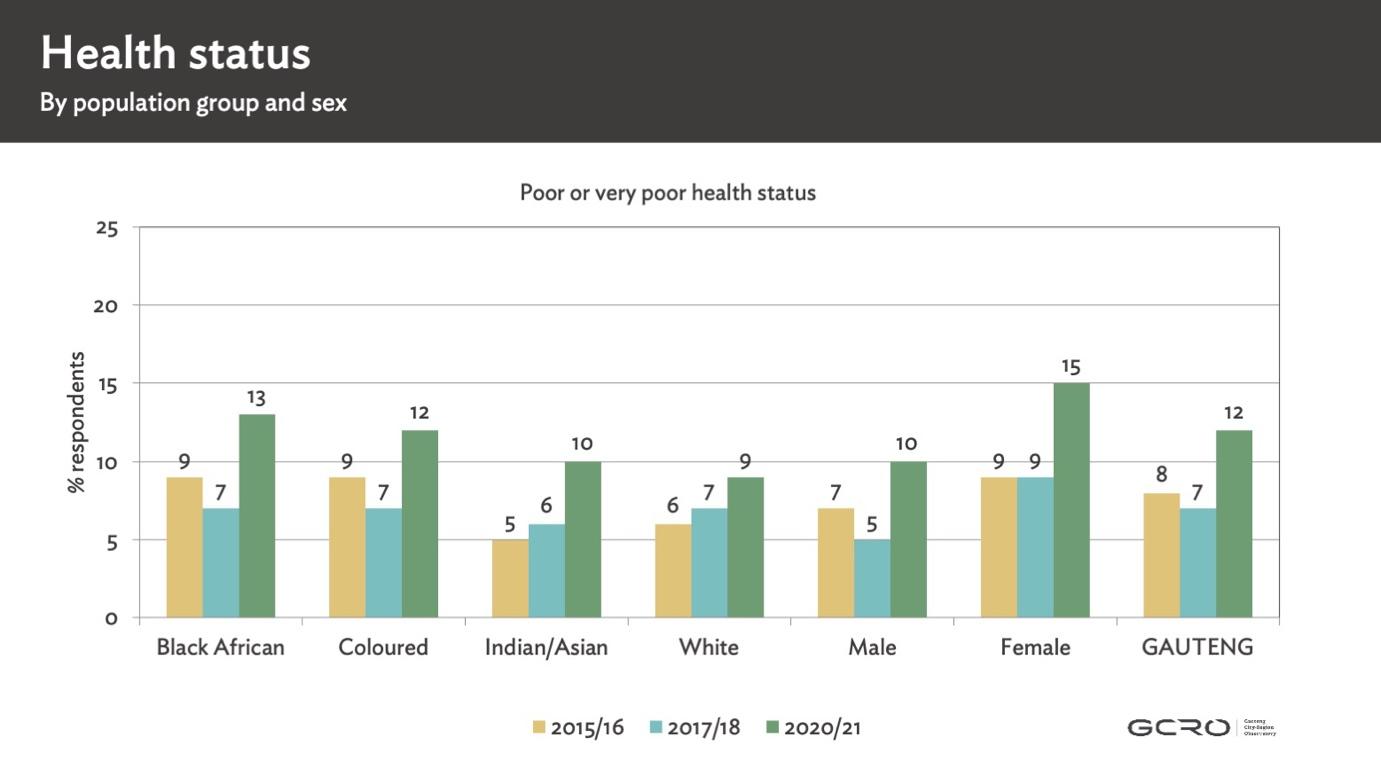 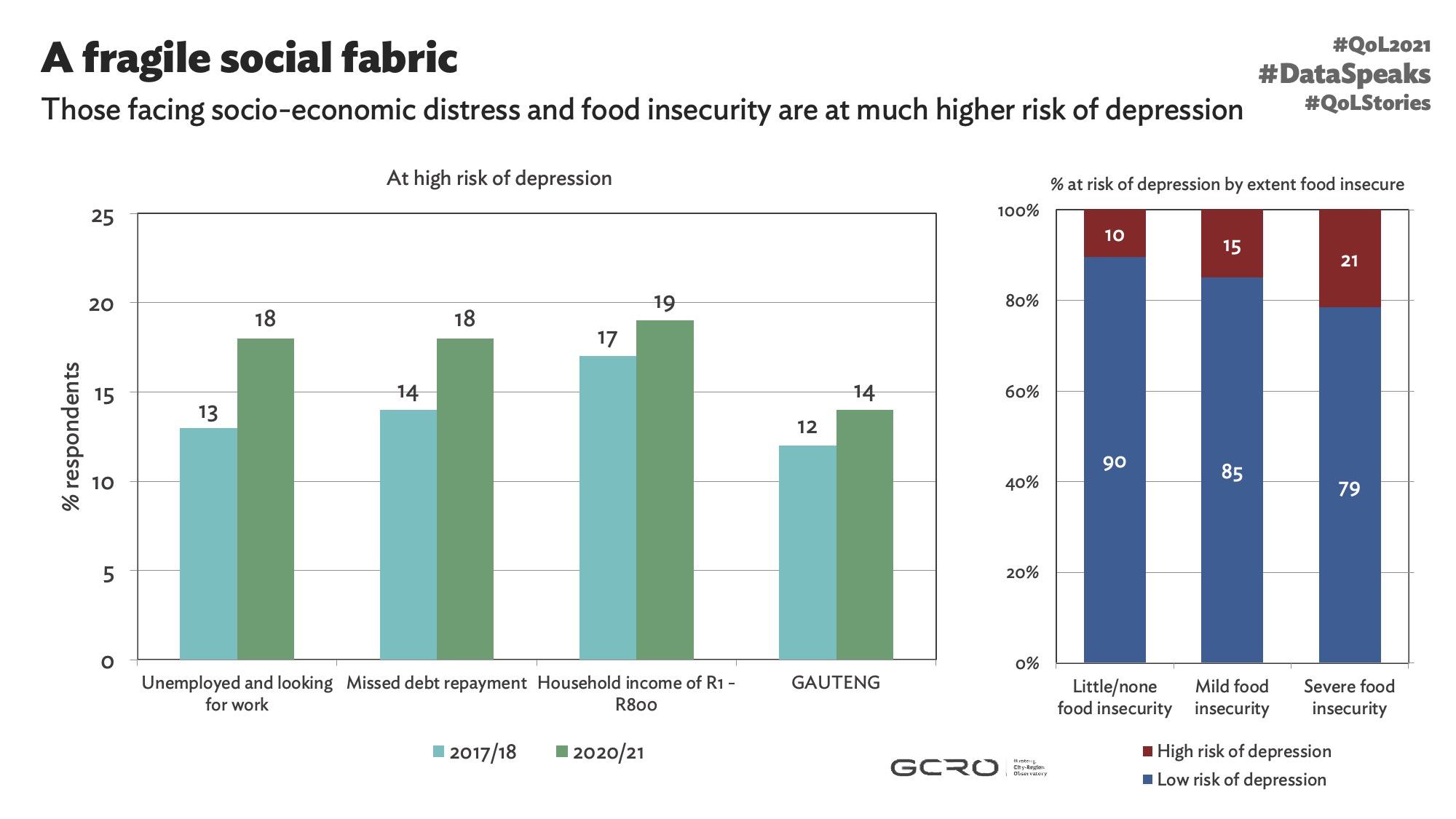 Despite substantial efforts to strengthen public healthcare services in Gauteng, and the often tireless work of healthcare professionals, QoL 2020/21 highlights the urgent need to resolve the system’s persistent issues. Many residents struggle to access healthcare, and levels of dissatisfaction among users of the public healthcare system are high and rising. Covid-19, and the economic crisis it triggered, have worsened the physical and mental health of the residents of the province. We see clear evidence that the groups most likely to struggle to access healthcare, make use of public healthcare services, and experience worsening physical and mental health, are those who are often already most vulnerable. The strong relationship between health and socioeconomic difficulties highlights the need for a multisectoral and holistic approach to improving health and wellbeing in the province. The gradual increase in reliance on the public healthcare sector over time highlights the critically important and growing role of this sector in the health and well-being of Gauteng’s population. A strong, high-quality public healthcare system, supported by adequate resourcing and skilled management, will be essential to Gauteng’s recovery from the devastation inflicted by Covid-19. DM

Sthembiso Pollen Mkhize is a junior researcher at the Gauteng City-Region Observatory (GCRO). As an emerging researcher, Sthembiso’s research agenda centres on understanding the influence of structural entities on lesbian, gay, bisexual, transgender and queer youth development and wellbeing. With a background in human geography and population studies, Sthembiso’s research interests continue to broaden and extend across multiple constructs that lie at the heart of promoting quality of life and wellbeing, health, development and social justice for marginalised individuals.

Dr Alexandra Parker is a mid-career researcher grounded in the disciplines of architecture and urban studies, with published scholarship in geography, media and cultural studies, feminist methodologies, identity studies, and visual representation and methods. Alexandra’s research is directed at the everyday practices and activities occurring in the city-region with interests in gender and the urban, suburbia, culture and space, and place identity. Alexandra believes in the power of storytelling and is inspired by recent innovations that combine data, narratives and rich visual imagery.

Dr Julia de Kadt is a senior researcher at the GCRO, and has led the Quality of Life 6 (2020/21) survey. Julia has a strong interest in research methods, including the implementation and analysis of large-scale surveys. She draws on data to better understand post-apartheid South Africa, with a particular focus on issues of quality of life and well-being, health, education, and youth. She holds a PhD from Wits University.