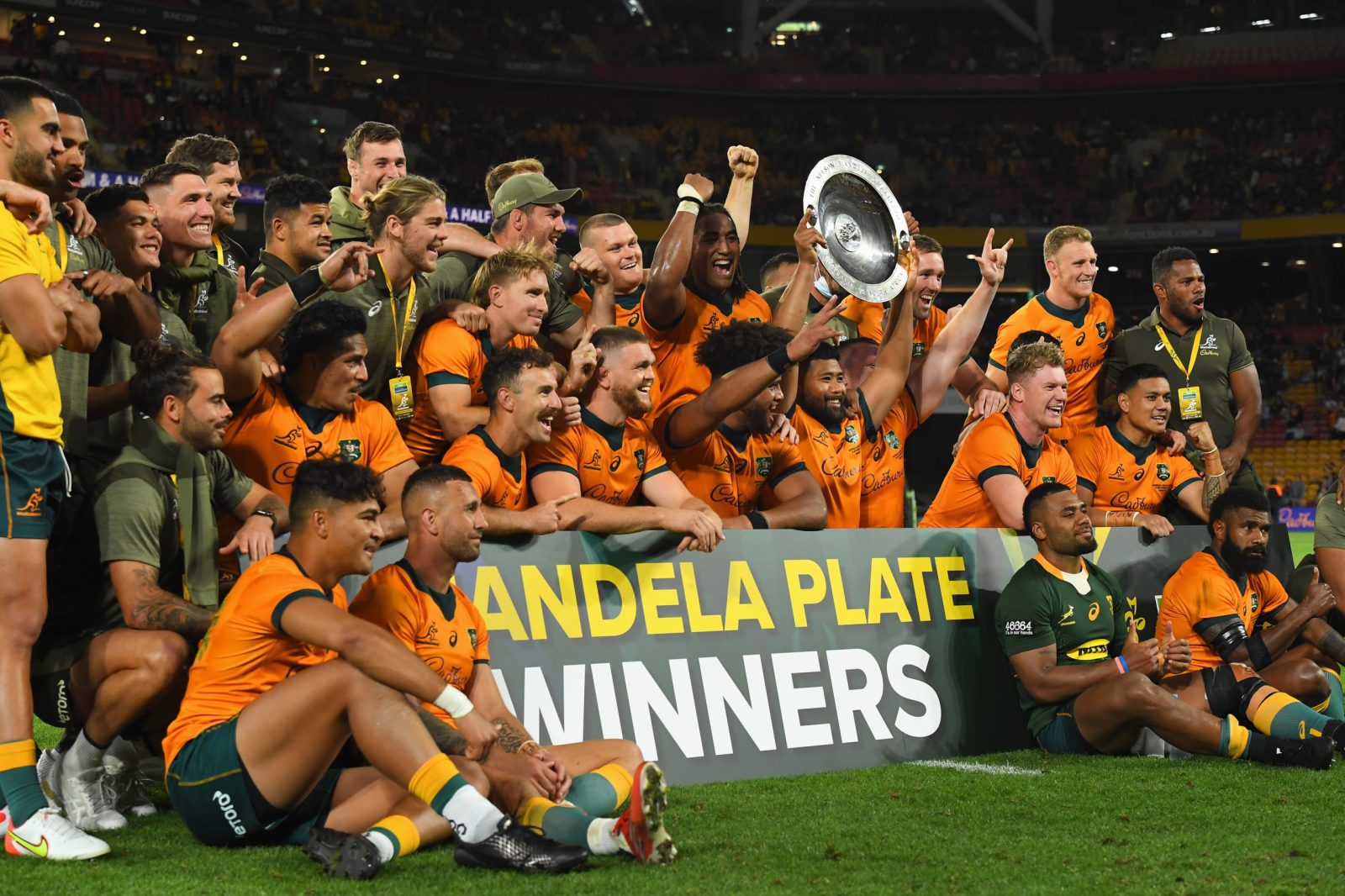 The Wallabies pose with the Mandela Plate during the Rugby Championship match between the Australian Wallabies and the South Africa Springboks at Suncorp Stadium on 18 September 2021 in Brisbane, Australia. (Photo: Albert Perez / Getty Images)

The Wallabies claimed the Nelson Mandela Plate after beating the Springboks in Brisbane on Saturday.

The Springboks might be world champions, but their reputation is in tatters after a second defeat against Australia in the space of six days. Bok coach Jacques Nienaber described it as a performance not worthy of the jersey – and it’s difficult to disagree.

Last week the Boks lost with the final kick of the match, but in Brisbane on Saturday, the last rites came much earlier when Wallaby wing Marika Koroibete scythed in for his second try 12 minutes from time.

It bookended a match in which Australia dominated the first and last quarters to raise serious questions about how the Boks go forward from here.

Koroibete’s second strike was Australia’s fourth try of the match and took them into a 30-17 lead, which remained the score until the end. It was the first time since October 2018, against the All Blacks, that the Springboks conceded more than two tries in a match.

The territory-based, kicking and smothering game the Boks have employed successfully in recent years is only effective when all the parts are functioning in union. In Brisbane, the Boks’ defence was as weak as it’s been in years, and everything else fell apart from there.

And now the All Blacks loom for the 100th meeting between the sides in Townsville next week. The Boks arrived in Australia with five wins from six games in 2021 and as the number one team in the world. That record now stands at five wins in eight, with their hardest fixtures to come.

The world champions will also drop to number two in the world rankings when they are updated on Monday after the All Blacks beat Argentina 36-13 in the day’s later game at the Suncorp Stadium. It all regressed quickly in two weeks.

The Boks face an uphill battle to salvage something from the Rugby Championship, which they could mathematically still win, but that is clutching at straws. Beating the All Blacks next week seems a fanciful notion after two inept displays against Australia. It won’t happen if the Boks play like they did in Brisbane.

Although South Africa’s set piece was strong enough, they had no imagination and flair on attack despite moving the ball in hand more than they have all season.

The Boks carried 87 times to the Wallabies 63, but only beat five defenders. The Wallabies beat 19 defenders with their carries and made more metres with fewer attacks. Cheslin Kolbe’s ability to conjure up magic has been sorely missed in the past two weeks.

Bok scrumhalf Faf de Klerk struggled with both his decision-making and execution, and there were simply far too many tackles missed – 19 in all. It was a shambolic performance, which the stats only partly reveal.

The Wallabies in effect shut down the Boks’ rolling maul and were brutally effective in defence, completing 96% of their attempted tackles. By contrast, both the Wallabies’ first two tries in the opening quarter, scored by centre Len Ikitau, were direct results of missed tackles by the Boks.

Australia, despite their struggles at set piece, were much more clinical on attack and breached the Bok line with effective surges that will leave Nienaber pondering his options.

For a second week running, it was a strangely flaccid display from the Boks. Under Nienaber, they are famously clinical in their analysis and review everything unemotionally. But maybe that is exactly what is lacking. They are too robotic.

“We were truly beaten in every department. We made too many errors and it’s something we have to figure out quickly, but I can’t put my finger on it,” Nienaber said after the match.

“You get tested differently (by southern hemisphere teams) against sides like this. And it’s been a massive challenge for us.

The reality is that Australia, after three heavy losses against the All Blacks where they tried to go toe to toe with New Zealand, played the percentages against the Boks.

They kicked for territory, and kept the flamboyance to a minimum, yet were good enough to score tries when they created chances. They are definitely improving under coach Dave Rennie while the Boks have taken a few steps back.

Bok skipper Siya Kolisi blamed the players for the defeat and it was hard to disagree. The game plan is well established and has shown to be effective. But if players constantly make mistakes by knocking-on, missing tackles and conceding penalties, there is little the coaching staff can do in a match.

“It’s just mistakes,” said Kolisi after the match. “We’re training very well together, but every single guy is making a mistake.

“We maul well, and then we’re not consistent afterwards and, at the next maul, we stuff it up. Our exit plays were poor.

“Defence is our thing, and we love that physicality and it didn’t work for us. We’re going to have to look at ourselves, and we have to be better next weekend. We have to pull tighter.

“I thought on the field, we were well prepared. We, as the players, didn’t enforce what we planned, so it was 100% us. The preparation was good, and we just didn’t deliver it on the day. As players, we have to take responsibility for that.”