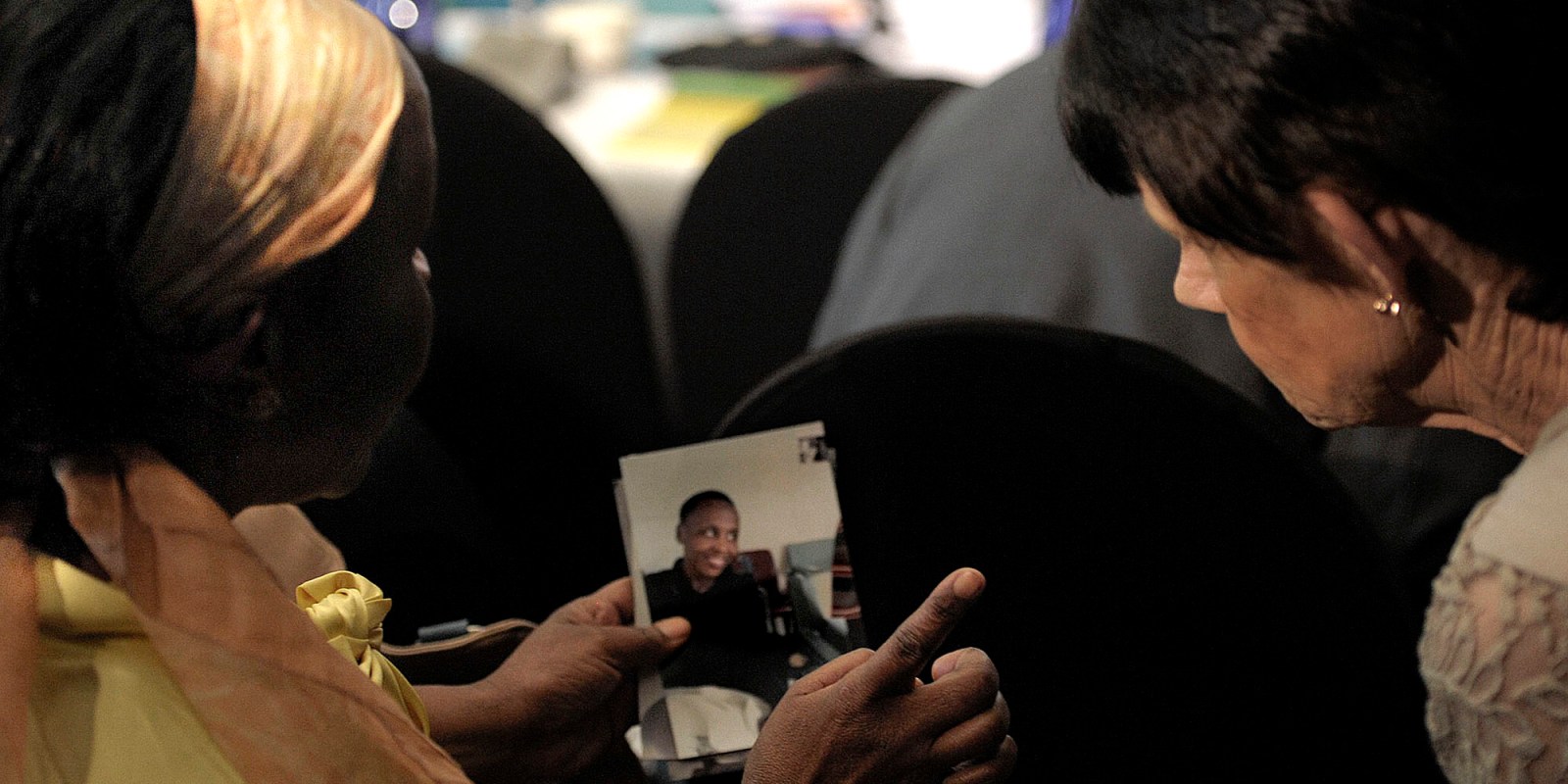 Family members at the arbitration hearings showing each other photos of their deceased loved ones. (Photo: Joyrene Kramer)

Judge Mmonoa Teffo adjourned the proceedings in order not to ‘contaminate evidence’ because of documentation that had been incorrectly filed and captured for the inquest.

Levy Mosenogi, the chief director of the Gauteng Department of Health (GDoH) and former project leader of the Life Esidimeni transfer of patients to NGOs, on Wednesday testified at the inquest into the death in 2016 of 144 mental health patients who died after being transferred.

However Mosenogi’s time on the witness stand came to an abrupt halt when Judge Mmonoa Teffo adjourned proceedings until 4 October in order not to “contaminate evidence” because of documentation that had been incorrectly filed and captured for the inquest.

This is the fourth time the inquest has been delayed, and only four of the 36 witnesses have so far testified.

Before the adjournment, Mosenogi testified that, “I requested an extension of the contract of six to 12 months to allow the department to ensure that the facilities that the patients will need when transferred are in order and meet the requirements to accommodate mentally ill patients. This was based on what I observed on my initial visits to some of the LE facilities.”

Mosenogi said he had also proposed that the GDoH procure an additional two Life Esidimeni facilities as an alternative to termination of its contract. The chief director said he had visited Waverley and Baneng NGOs in order to get a better understanding of what the facilities looked like, how they operated and their conditions, but he did not prepare a site visit report.

“I did visit NGOs but it was later that I discovered that there were new NGOs.”

He said he had inspected Tshepong NGO because it was an old hospital which had been renovated.

Asked about the NGO Precious Angels, Mosenogi responded: “Your Honour, Precious Angels, I only heard about it when the termination was complete and people began to die at the NGO facilities… when I went with the HOD and with other members… we did visit both sites, Atteridgeville and Danville.”

Asked by the evidence leader whether he found the premises suitable for mental healthcare users, Mosenogi replied: “I don’t think I’d be able to have an objective observation because then it was influenced by the after-effects of the deaths.

“When I went to the Atteridgeville one I just saw the facility, spoke to care workers and they explained to us what’s happening. We also went to the Danville one, which is a double-storey place. It was not suitable because… mental healthcare users are never accommodated on the upward floors… always they’re supposed to be on the ground.”

Mosenogi said that he felt that the allocated time period for the transfer of patients was not enough and when he raised this in a meeting with former MEC Qedani Mahlangu she called him an “agent” of Life Esidimeni. DM/MC