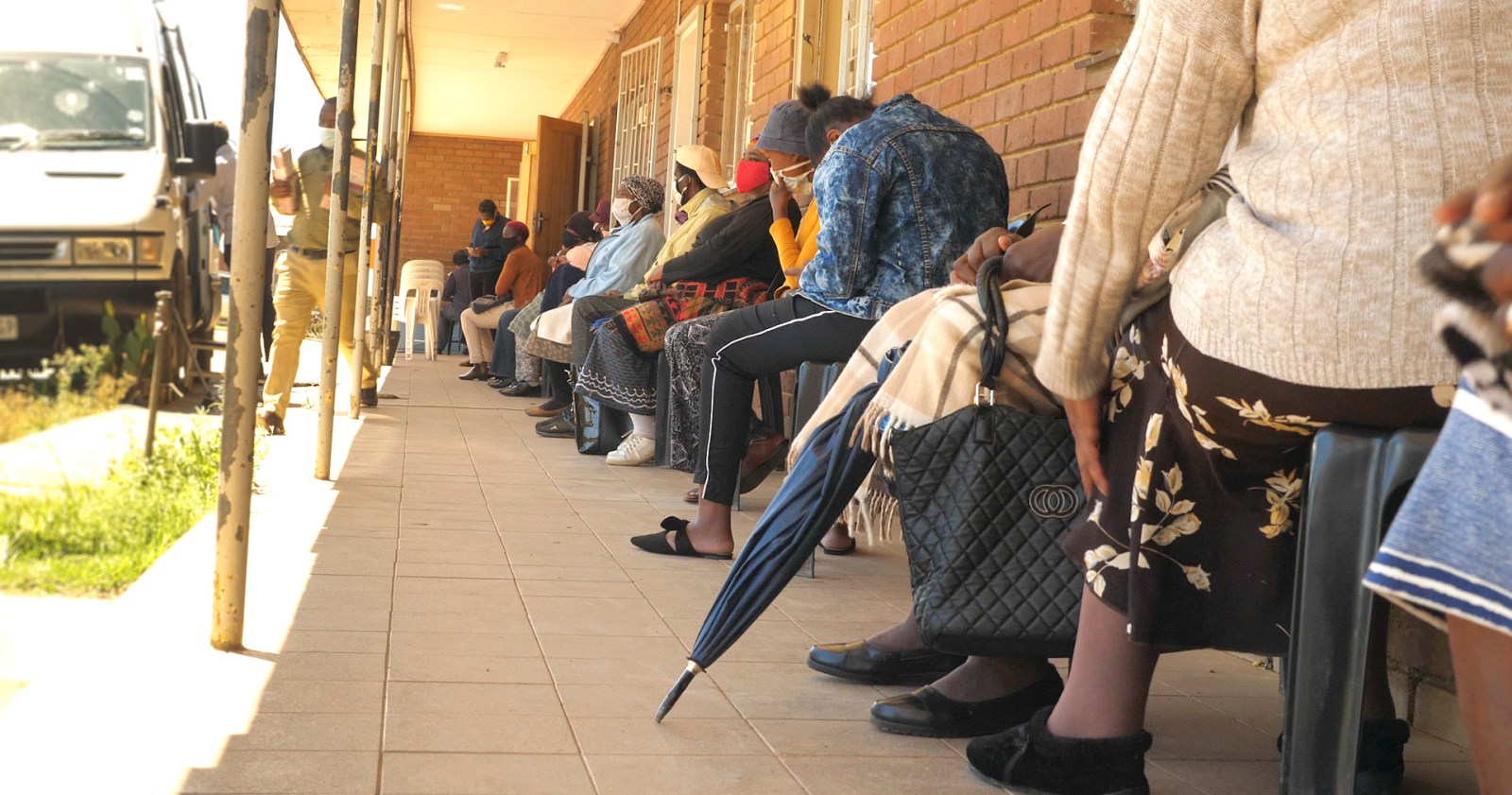 A shortage of healthcare workers is contributing to long waiting times at healthcare facilities and poor treatment adherence, as well as undermining the response to HIV and tuberculosis in the Free State, a new report shows. Spotlight attended the launch of the report and asked the Free State health department for a response.

In response to the report, the Free State health department pointed out that mechanisms to respond to many of the issues highlighted are already in place.

The Ritshidze report found that only about 20% of the facility managers interviewed said they had enough clinical and non-clinical staff to meet the needs of patients. Only 36% of public healthcare users surveyed across the province were of the view that there was always enough staff at the facilities. This varied greatly across districts, with 57% in Thabo Mofutsanyana District, 24% in Lejweleputswa, and only 9% in Mangaung.

The report is based on monitoring at 22 public healthcare facilities in three districts – 12 in Lejweleputswa, eight in Thabo Mofutsanyana and two in Mangaung. Facility managers at 20 facilities were interviewed and 425 healthcare users surveyed – 85% of whom are living with HIV. Nationally, Ritshidze monitors 400 clinics and community healthcare centres. The Free State report follows similar reports from Limpopo and North West.

Thato Moloi (not her real name), a 59-year-old woman from Phomolong in Hennenman, has been living with HIV for about 15 years. Her nearest clinic is Phomolong clinic, which is in the Lejweleputswa District that caters for about 20,000 people.

“After being diagnosed with HIV I took my treatment for five years and thereafter I decided to stop taking my medication because firstly, the staff is not friendly, then every time I went back to collect medication they would tell me that my file is missing and to top it all off, I had some terrible side-effects,” she says, going on to describe a series of abdominal symptoms. “So, after several attempts to get help from the clinic, I decided that I will not go back to the clinic because they were rude and not helpful.”

Dr Riana van Zyl, a medical specialist at the University of the Free State, says the biggest risk in stopping HIV treatment is that a person’s viral load will go up and they will become sick. “Before stopping treatment they must always consult their doctor to see if they can change their treatment to a regimen with fewer side-effects. There are more options available today and the newer ART (antiretroviral therapy) has fewer side-effects.”

Van Zyl says side-effects differ based on the treatment. “Older regimens containing stavudine (d4T) had the side-effect of lipodystrophy which means a change in fat distribution which sometimes manifested as a distended abdomen.” Stavudine has mostly been phased out in the public sector HIV programme.

“Patients discontinue treatment for many reasons, but firstly they need to have accepted the diagnosis and understand how the ART works and how to stay healthy. Having social support is critical in remaining compliant because patients can develop ‘pill fatigue’ after being on treatment for a long period and support groups can help to encourage them,” says Van Zyl.

“So, in January this year,” Moloi says, “I gained [the] courage to go back to the clinic to get my ARV treatment because I was now starting to get sick. I was diagnosed with TB. I fell sick three times, so this is how I knew that I had to go back on medication. Going back to the clinic, I [received] a bad attitude from the nurses, but in the end they helped me. They injected me with something, but I was never told what the injection was for. Because I wanted to get my health back in order, I accepted anything that was offered to me.”

But according to Free State health department spokesperson Mondli Mvambi, the department is already doing a lot to help people with HIV remain on treatment and to re-engage should it be interrupted.

“The department provides ongoing adherence counselling support for patients who are non-adherent,” says Mvambi. The department had employed social workers to provide psychosocial support, but he admits the coverage is not adequate. “We have also collaborated with other departments, such as social development, to assist with social factors and the departments of Basic and Higher Education to provide support to learners and students who might have psychosocial factors that may contribute to non-adherence.

He also points out that the department uses community healthcare workers to trace people who have stopped treatment and link them back into care.

“A lack of professionalism and poor attitude from staff towards patients can make a clinic visit a painful and anxious experience, especially for those returning to care following a treatment interruption or for key populations most at risk of discrimination and even abuse. Sending people home empty handed with unexplained alternatives or just a handful of pills, is at best frustrating and at worst causes individuals to interrupt treatment,” states the report.

But Mvambi points out that the department has a complaint management system “where clients are encouraged to raise complaints immediately with managers and are resolved within the set standards where a root-cause analysis is done and steps are taken to address the root cause of the complaint”.

According to Russell Rensburg, director of the Rural Health Advocacy Project, one reason healthcare workers are disrespectful to patients is a lack of accountability: “We often speak about the death of leadership, but not often enough on the application of management protocols, which include planning, organising and controlling. Training may be a problem as facility managers have limited training in dispensing their functions.

“Eighty-five percent of the South African population is reliant on publicly funded healthcare services. These include interventions such as access to sexual reproductive health services, HIV testing and treatment, TB screening and diagnosis, and more routine public health services like childhood immunisations. Our performance on these targets has been declining and it is all because of the lack of accountability at facility level.”

How can the system improve?

Rensburg says: “Every crisis is an opportunity and, in my view, part of what is needed is to strengthen the use of health management and information so that we have a better understanding of what is happening in the system. For example, to end HIV/AIDS as a public health threat we need to get at least 90% of people living with HIV on treatment. On a national level, this number is currently sitting at 70%. Better information on systems can tell us what is stopping us from reaching the target.

“Secondly, we must look at human resources for health more strategically. There is an inequitable distribution of healthcare workers, not only between provinces but also on [the] level of care, with primary healthcare often neglected. Lastly, we must link funding with need and avoid just funding on historical performance.”

Mvambi points out that there is already “an improved and differentiated electronic model of care that has been designed to improve healthcare services in the province”.

He draws particular attention to the central chronic medicine dispensing and distribution programme (CCMDD) which “was designed for stable patients who are on chronic medication to collect their medication in the most convenient manner”. (A recent Spotlight article asked how well the programme is working.)

“Stable clients on ART are decanted to use the CCMDD method where clients collect their medication at their preferred pick-up points to reduce frequent facility visits and to avoid overcrowding of health facilities. In this manner, chronic patients no longer have to wait in long queues and can now collect their medications from these smart lockers, which are situated at 17 centres in the province. This is a quick, safe and convenient medicine collection service. The smart lockers enable stable clients to collect a two to three months’ supply, which helps to avoid frequent visits at the clinics,” says Mvambi.

But some in civil society think there are more deeply rooted problems in healthcare, such as those described in the Ritshidze report.

“Corruption is a growing trend of officials who do not have the best interest of citizens at heart,” he says. “Officials do not prioritise government programmes. There are 1,300 healthcare workers who succumbed to Covid-19 in the country. Instead of prioritising employing workers, the former minister of health injected money into a media campaign. So, a solution that the government can use to better primary healthcare, will be to do away with cadre deployment and start employing people with relevant skills and qualifications.” DM/MC

Note: Someone from the TAC is quoted in this article. Spotlight is published by SECTION27 and the TAC, but is editorially independent – an independence that the editors guard jealously. Spotlight is a member of the South African Press Council.