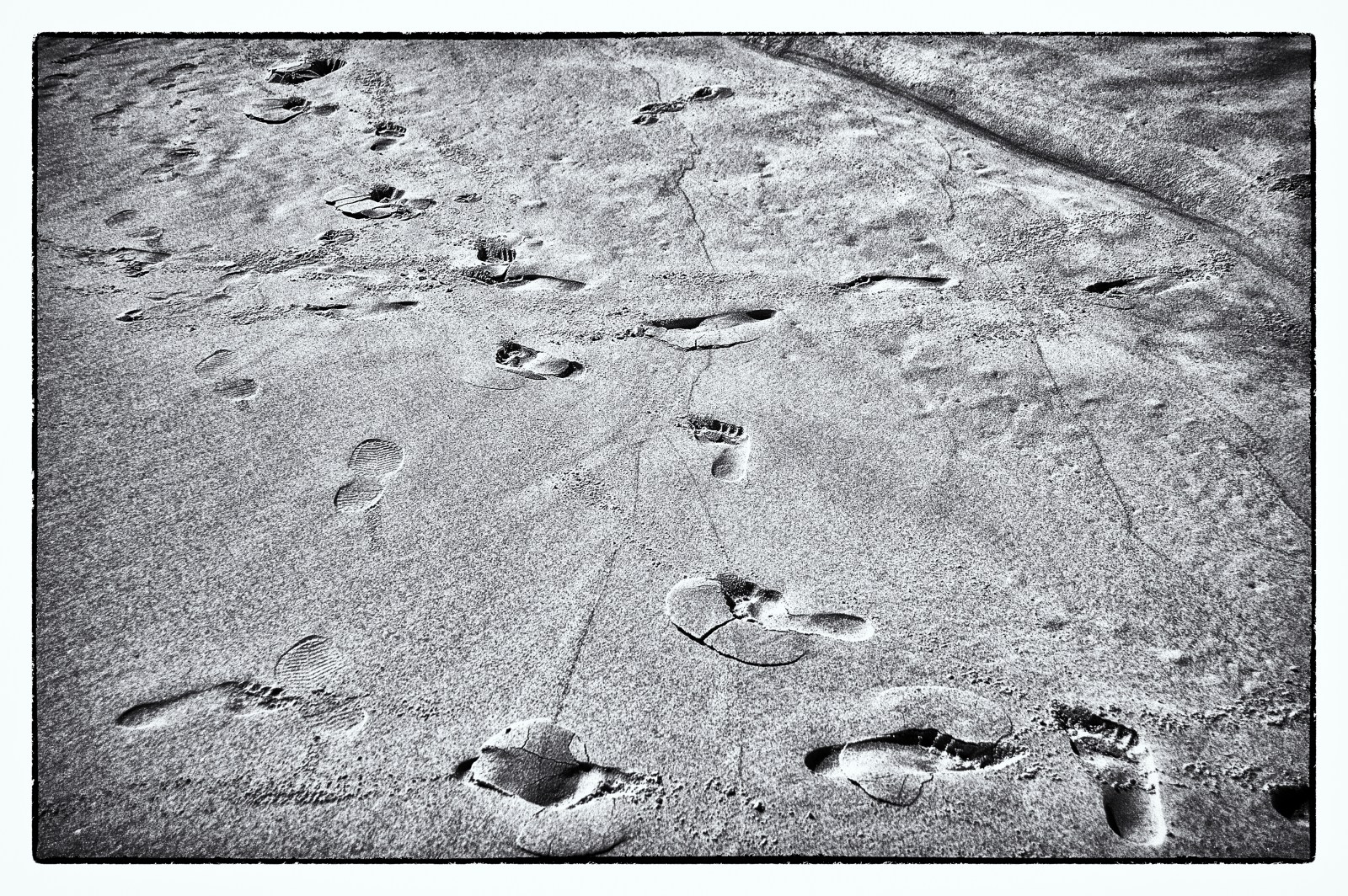 It is the shape of the heel that gives away the sex of the person, says Professor Matthew Bennett. Those prints left behind, perhaps in a patch of mud or a pool of blood, show sexual dimorphism. (Image: Don Pinnock)

An ancient skill whose very origin was humankind’s first introduction to scientific reasoning is being given a new technological spin that may help in crime-fighting.

At a crime scene in the near future, a detective takes a smartphone out of her pocket and snaps an image of a bloody footprint.

Seconds later she has her first lead on the identification of the suspect.

An app on the phone would tell the sex and estimated age of the perpetrator who left the print. And it would all be thanks to machine learning.

This, believes Professor Matthew Bennett of the department of environmental and geographic sciences at Bournemouth University, is a tool that will not just help in the fight against crime — it could even give a voice to long-gone stone age communities.

Bennett has been working on a machine learning algorithm that sexes 2D footprints, and he and his team have achieved an accuracy of up to 90%, on Caucasian feet.

It has outperformed expectations.

Machine learning is an area of artificial intelligence where algorithms learn from data, without human input.

“It trains itself to actually recognise the distinction between male and female tracks,” says Bennett.  “And we were surprisingly successful.”

It is the shape of the heel that gives away the sex of the person. Those prints left behind, perhaps in a patch of mud or a pool of blood, show sexual dimorphism where the male heel is usually more pronounced and a woman’s more slender.

Trackers have known of this for millennia, but the problem, Bennett explains, is that tracking comes down to human interpretation. Machine learning on the other hand will turn the identification of a print into hard science that will stand up in a court of law or a peer-reviewed journal.

“What you need, particularly both in a scientific and crime context, is something that’s defensible via science, not just somebody asserting their opinion.”

Most criminals ply their trade fully shod, but footprints at crime scenes are not that uncommon.

“A lot of indoor crime scenes are barefoot and you know a good quality carpet will retain a 3D impression of barefoot prints for months,” says Bennett.

But machine learning still has a lot to learn when it comes to reading footprints.

Expert tracker and author Louis Liebenberg can not only sex footprints, his eye can glean a whole lot more from the imprints people leave behind.

“You can see from the footprints, whether somebody is short and stocky, or tall and thin,” says Liebenberg.

“And in fact, at one point, I got so tuned in on it, that I could tell if two women walking together were mother and daughter.”

The balls of the feet give a person’s age away. In older people, Liebenberg says the ball of the foot shows prominently in a footprint. The balls of a young person’s foot are smoother and rounder.

And just as Bennett hopes one day his machine learning algorithm will help in the fight against crime, Liebenberg once used his tracking skills to catch a mugger, who had been terrorising Noordhoek, in Cape Town.

The Cybertracker app that he had helped develop linked the print through GPS to another site.

“He was wearing old worn shoes with distinctive cracks and cut marks and the poor sod was wearing mismatched shoes, with completely different sole patterns.

The odds of that were like one in a billion, so that poor guy didn’t have a chance.”

The machine learning app could also one day add to our understanding of another discipline that Bennett believes is going through a revolution.

Across the globe, a new generation of trackers has been on the spoor of preserved tracks left by our ancestors sometimes tens of thousands of years ago. These tracks have been found on dunes and deep in French caves.

“Archaeologists are becoming aware of the power of footprints to tell stories,” says Bennett.

Tsamkxao Ciqae is of the Ju/’hoansi San in northeastern Namibia and his day job usually is taking tourists out and showing them the art of tracking.

But in recent years, his and the expert tracking skills of and two of his colleagues /Ui /Kxunta and /Ui G/aqo De!u, have taken them to France and Spain.

They have been interpreting tracks deep within caves dating back to when mammoths still roamed northern Europe.

Tracking in caves, says Ciqae, is far different from his home range of dry Namibian desert.

Cave tracking requires squeezing through narrow passageways, enduring the cold and being extra careful not to disturb 17,000-year-old footprints.

“It was a bit hard, you know, the stalactites leaking from the roof have dripped onto some of the footprints,” he explains. “Sometimes you only find just the heels and the toes, and not the whole footprint.”

Still, the San trackers were able to provide insight into why these early Europeans ventured into the caves. A set of footprints deep in one cave was once thought to have been left after the performance of a ritual dance.

The San trackers identified this as the footprints of a 12-year-old girl, who was simply playing in the cave. It revealed that hunter-gatherers of all ages were visiting the caves.

“A stone tool doesn’t tell you whether it was created by a man or a woman, but these ancient tracks can tell you so much more,” says Bennett.

Just as there is a revolution in the study of ancient tracks, the art of tracking is also seeing a resurgence.

Liebenberg is teaching a student to track who wants to use it as part of her research into her Master’s thesis.

Ciqae is part of a programme that is teaching younger Ju/’hoansi San to track. Already they have produced a couple of master trackers.

Tracking is an ancient skill that technology is giving a new spin to, the origins of which, believes Liebenberg, were humankind’s first introduction to scientific reasoning. He noticed this in how hunter-gatherers go about tracking today.

“Let’s say you have four trackers, three experts and a younger tracker with lesser experience. Now the elders might come to the same conclusion and the younger person to a different conclusion,” explains Liebenberg. “They will debate it and look at the evidence, and the outcome will not depend on authority. That is the same sort of critical discussion, peer review process in science we see today.” DM