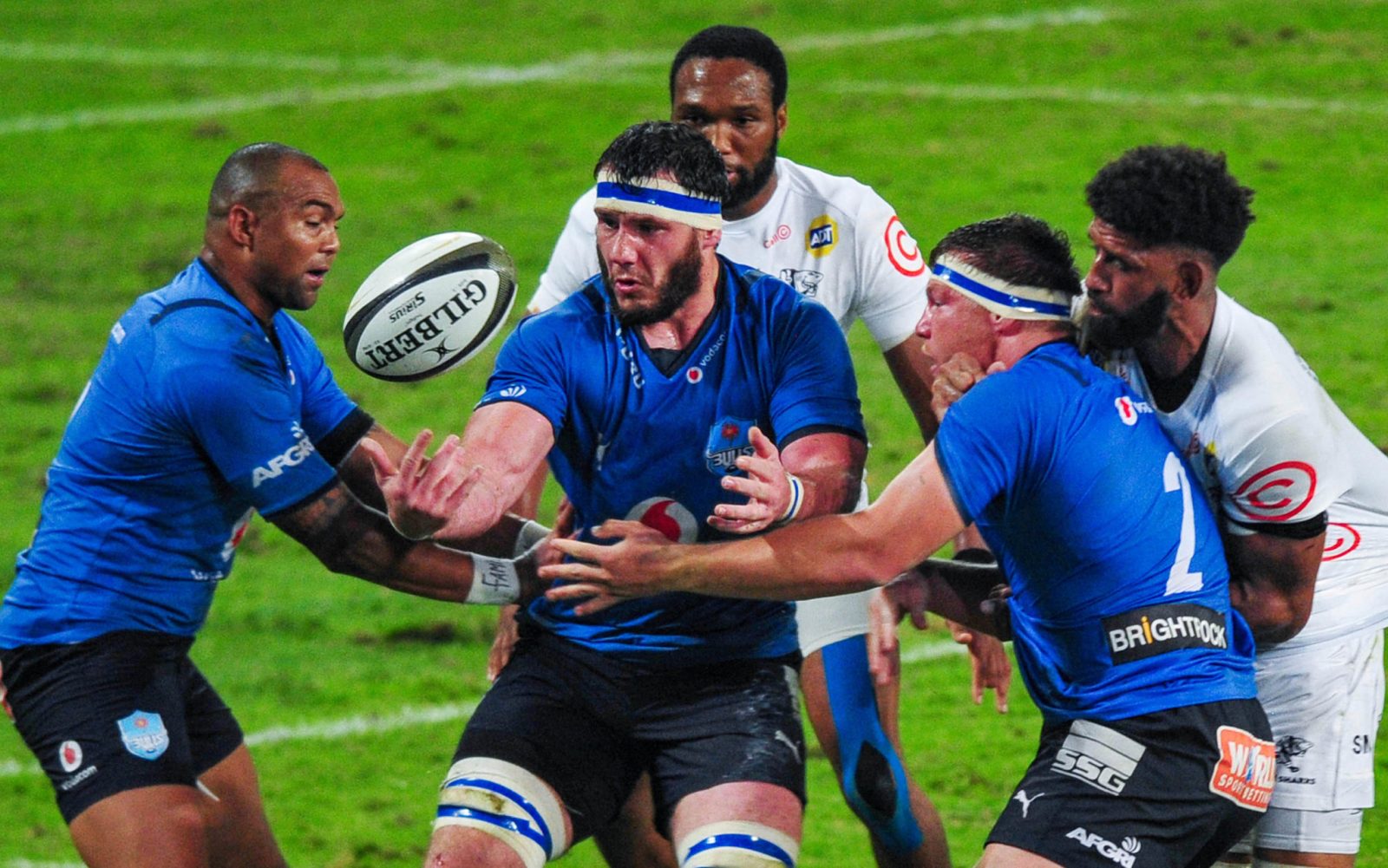 The United Rugby Championship is a new cross-hemisphere tournament that will give South African teams the chance to qualify for the prestigious European Champions Cup.

The Bulls, Lions, Sharks and Stormers have been getting ready for the United Rugby Championship (URC) for the past 12 months.

The challenge of playing in European conditions and competing across a northern-hemisphere season – which, in this case, will run from 24 September to 18 June 2022 – will test the depth of the squads as well as the management skills of the coaches like never before.

While the 2021/22 season will be tough, the 2022/23 season will be even tougher as the SA teams are forced to play even more fixtures across two different competitions: the URC and the Champions Cup (or the second-tier European Challenge Cup, for those sides that don’t qualify for the top flight).

First, it’s important to put the challenge of competing in Europe, and indeed the state of the SA franchises, into perspective.

The Springboks have won the Rugby Championship, the World Cup and a series against the British & Irish Lions over the past three years. They are full value for their No 1 ranking on the World Rugby ladder. The national squad is stacked with players based at clubs in Europe and Japan.

The Boks have succeeded at Test level in spite of South Africa’s depleted and underperforming franchises in recent times. The Bulls were the last team to win the Super Rugby trophy – in 2010.

It’s also worth remembering how poorly South African teams travelled during the Super Rugby era, whether they were playing in Argentina, Australia or New Zealand.

The Bulls were given a reality check earlier this year when they competed in the Rainbow Cup final.

After winning the Super Rugby Unlocked tournament, the Currie Cup and the Rainbow SA title, they went on to lose 35-8 to Benetton in the decider staged in Treviso.

Benetton finished the league phase of the Pro14 – the tournament that preceded the URC – with a record of one draw and 15 losses. When the worst-performing side in the Pro14 was pitted against the best team in South Africa, however, Benetton won the game at a canter.

All SA teams would do well to remember that result as they prepare for overseas matches in Europe over the next few months.

While Irish giants Leinster and Munster command respect, Italian teams Zebre and Benetton – who finished last in Conference A and B respectively in the recent Pro14 – evidently should not be underestimated.

The schedule: feast and famine

The SA teams could not have asked for a tougher start to the new tournament. All four teams will begin the competition with four consecutive fixtures in Europe.

What’s more, they will be without their Springbok players until December due to logistical and player-welfare reasons. The last two rounds of the Rugby Championship will clash with the first two rounds of the URC. Thereafter, the Bok players will receive the opportunity to rest and prepare for their next challenge – a three-Test tour of the United Kingdom in November.

This period could be viewed as a significant opportunity to rest and recharge before the season moves to the next phase.

That said, the four South African franchises will enjoy several more periods of “inactivity” over the course of the 2021/22 season. Given that these teams are yet to qualify for the Champions Cup or the European Challenge Cup, they will not play on the nine weekends that have been set aside for those competitions.

Over the course of the regular season, which will span from the end of September to the end of May, the four South African franchises will play a total of 18 games and also enjoy a total of 18 bye or break weeks.

That will change in the 2022/23 season, of course, when they will compete in the Champions Cup or the European Challenge Cup. The South African franchises could play as many as 27 games before the URC playoffs. 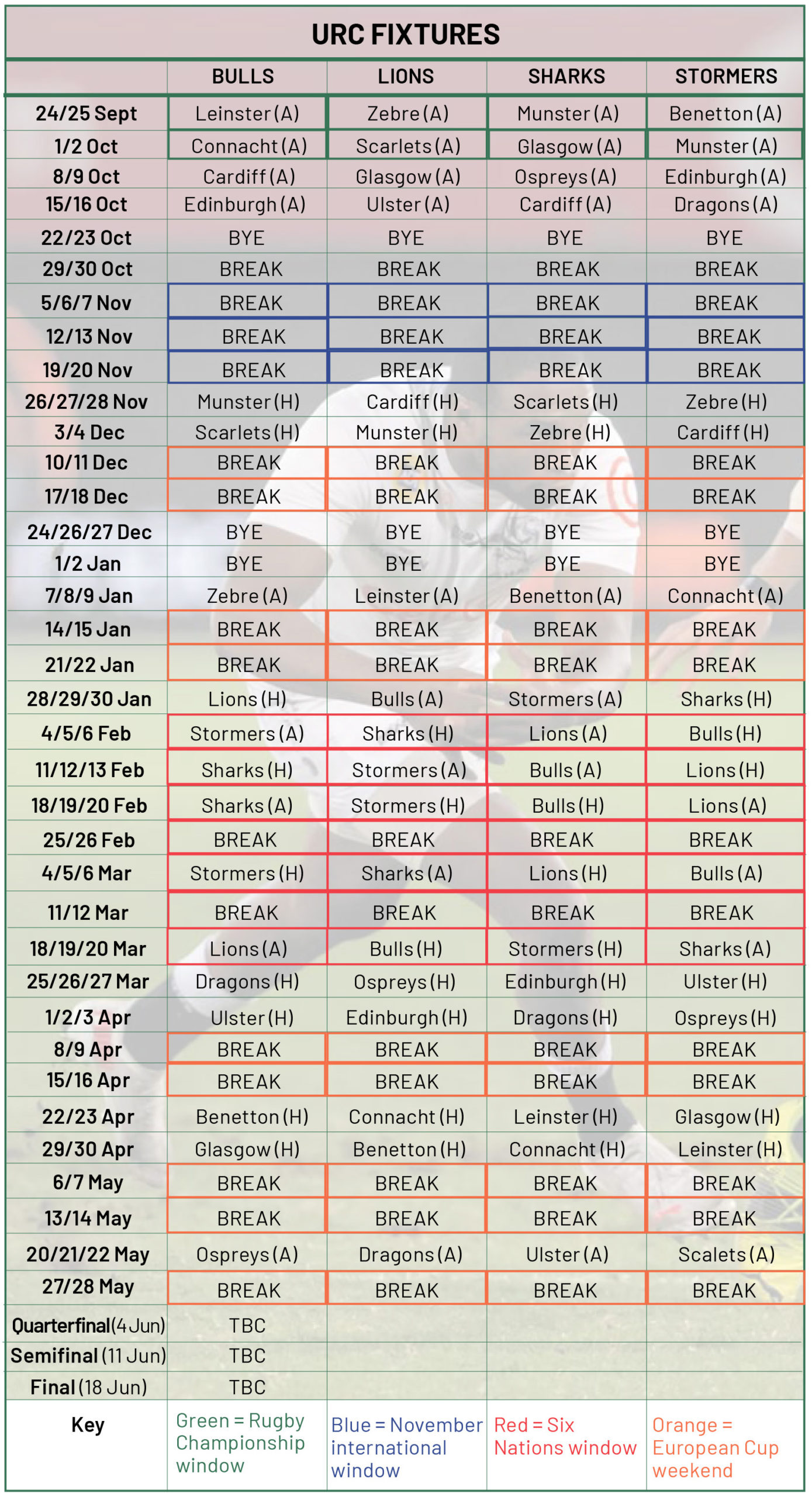 In the inaugural campaign, the South African teams will look to adapt to foreign conditions. They will aim to learn about the strengths and weaknesses of sides based in Ireland, Italy, Scotland and Wales.

When the URC takes a break during the 2022 Six Nations, the Bulls, Lions, Sharks and Stormers will compete in a double round of derbies staged at home and away. The results of these fixtures will influence the final standings of the South African pool and who qualifies for the URC playoffs and – most importantly – the 2022/23 Champions Cup.

The Bulls and Sharks – who recently advanced to the Currie Cup final for the second-consecutive time – must be the frontrunners in this respect.

Apart from their encouraging on-field performances, both franchises have put structures into place to facilitate long-term growth. Both are financially stable and are backed by private investors who hold majority shares in the professional arms of each team.

Coaches Jake White and Sean Everitt have made a number of savvy signings over the past few months to bolster the squad depth. That will pay dividends later in the season when some of their first-choice players succumb to fatigue or injuries.

The Lions and the Stormers, by contrast, are not as well prepared to succeed in the short or long term.

The Lions recently changed their management structure and have a young and inexperienced playing squad. The Stormers have been beset by problems off the field over the past 12 months, and it hasn’t been surprising to see a number of high-profile players moving overseas or to rival clubs as a result.

Like the Lions, the Stormers may also struggle to maintain a high standard over the course of the long northern-hemisphere season and may fall short of qualifying for the URC playoffs. DM168