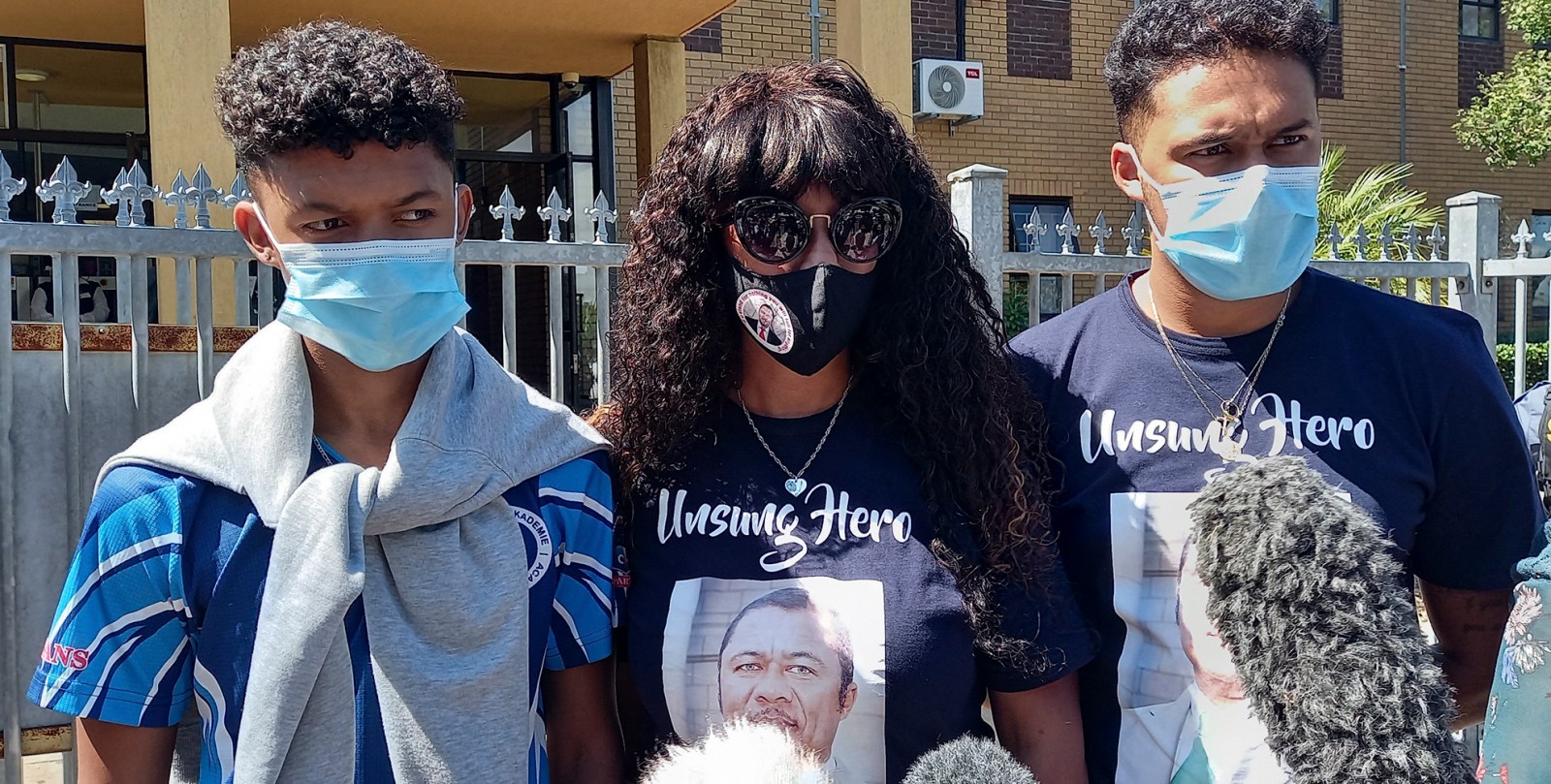 Nicolette Kinnear and her sons Casleigh (left) and Carlisle after their father, Charl Kinnear, was gunned down on 18 September 2020 in Bishop Lavis, Cape Town. 'In a way we still have that expectation, which will stay with us a long time, that he is going to come back,' she told Maverick Citizen. (Photo: Vincent Cruywagen)

Saturday, 18 September marks a year since the assassination of Anti-Gang Unit detective Lieutenant-Colonel Charl Kinnear in front of his home in Bishop Lavis, Cape Town.

It marked a turning point in the prolonged turbulence in the SAPS when the decorated officer, who was investigating his own colleagues and their links to a firearm licence racket, was “taken out”.

At this stage, only alleged underworld figure Nafiz Modack and debt collector Zane Kilian have been charged with the murder of the father of two.

The shooter remains at large.

Kilian was arrested on 23 September 2020 at his home in Springs and was denied bail on 11 March 2021 in the Bellville Regional Court. The tattooed, burly former pro rugby player’s hopes for freedom were dashed when Western Cape High Court Judge Ashley Binns-Ward dismissed his appeal application on 24 May 2021.

All in all there were five attempts on Kinnear’s life in November 2019, including a failed hand grenade attack. The State will argue that co-accused Amaal Jantjies and Janick Adonis, whose bail has also been denied, and Modack were the main conspirators in these five attempts.

Meanwhile, Kinnear will be commemorated at a memorial lecture planned for Saturday at 12pm in the open field next to Emmanuel Church in Gearing Street, Bishop Lavis.

Kinnear’s widow, Nicolette, spoke to Maverick Citizen ahead of the event.

“If I look at the calendar then it shows me it is a year, but where we are and I am, it is definitely not. In a way we still have that expectation, which will stay with us a long time, that he is going to come back,” she said.

The event is bound to be an emotional one for Nicolette Kinnear and the couple’s sons, Casleigh and Carlisle. A year after his death, she said, her husband’s clothes still hung in his wardrobe and his cologne and deodorant remained on his bedside table. It was difficult for the family to let go.

“I have a routine where I open his wardrobe over weekends. I put on the fans and if you look into his wardrobe there would be no musty smell.”

Their children, she said, felt that had the killer not robbed them of their father he would be wearing his clothes, “and so there is no reason at this stage to empty [the wardrobe]”.

Tearing up, she added that when she spotted her husband’s favourite T-shirt she could not help but remember him wearing it.

“I think it is easy to deal with it if you don’t see it, but I think for us as a family it is important for us to see it and face it. I think it is all part of our healing process.”

She said the family had been buoyed the past year by their faith and prayer.

Theirs had been a high school romance and Kinnear said the couple would have celebrated their 27th wedding anniversary and 36 years as soulmates this year.

“I was in Standard 6 in 1986 and Charl in matric when we met. We met in the former NGK church. Charl was my Sunday school teacher and my confirmation teacher when I entered high school.”

The murder on 18 September 2020 had created for the family “two worlds at one address”.

Inside their home, she said, the family could hold on to the good memories of Charl Kinnear, but outside reminded them of when it all changed. It was there that Kinnear was killed as he approached his own driveway.

Returning to the events of 18 September she recalled: “What was very weird is that two days before the murder, Charl sent me four pictures of Zane Kilian without explaining why.”

At that stage, she had not been aware that the person was Kilian. A week after the assassination, while talking with her husband’s colleagues at her home she remembered the photographs he had sent. She showed them to Kinnear’s colleagues.

“They told me it is Zane Kilian and that the investigating team was busy transporting him to Cape Town,” she said.

The bail proceedings of Modack, Kilian, Cronje and Tabisher have not been finalised in the Blue Downs Regional Court.

This is a bitter pill to swallow for Kinnear, who said it was frustrating to sit in court listening to the process which had to be followed.

Facing the accused was also part of coming to terms with the loss and grief.

That the gunman who killed her husband was still at large did not trouble her, as investigators had only revealed “the tip of the iceberg.”

“When the incident happened, many thought it was a puzzle with four pieces and a case of one, two, three and four and it’s finished. I think as time goes by more pieces will be added to the puzzle.

“The investigators have collected 1,000 pieces that can complete only one corner of this massive puzzle. Still a lot of pieces need to be gathered.”

On Wednesday, she attended the continuation of the bail proceedings at the Blue Downs Regional Court. In the dock were Modack and Kilian.

The State claims the two orchestrated the plot to kill Charl Kinnear and also conspired to murder lawyer William Booth on 9 April 2020.

Wednesday’s proceedings were postponed because the IT system of the Department of Justice was hacked.

The bail hearing of Modack, Kilian, Cronje and Tabisher resumes on Wednesday, 22 September at the Blue Downs Regional Court. DM/MC