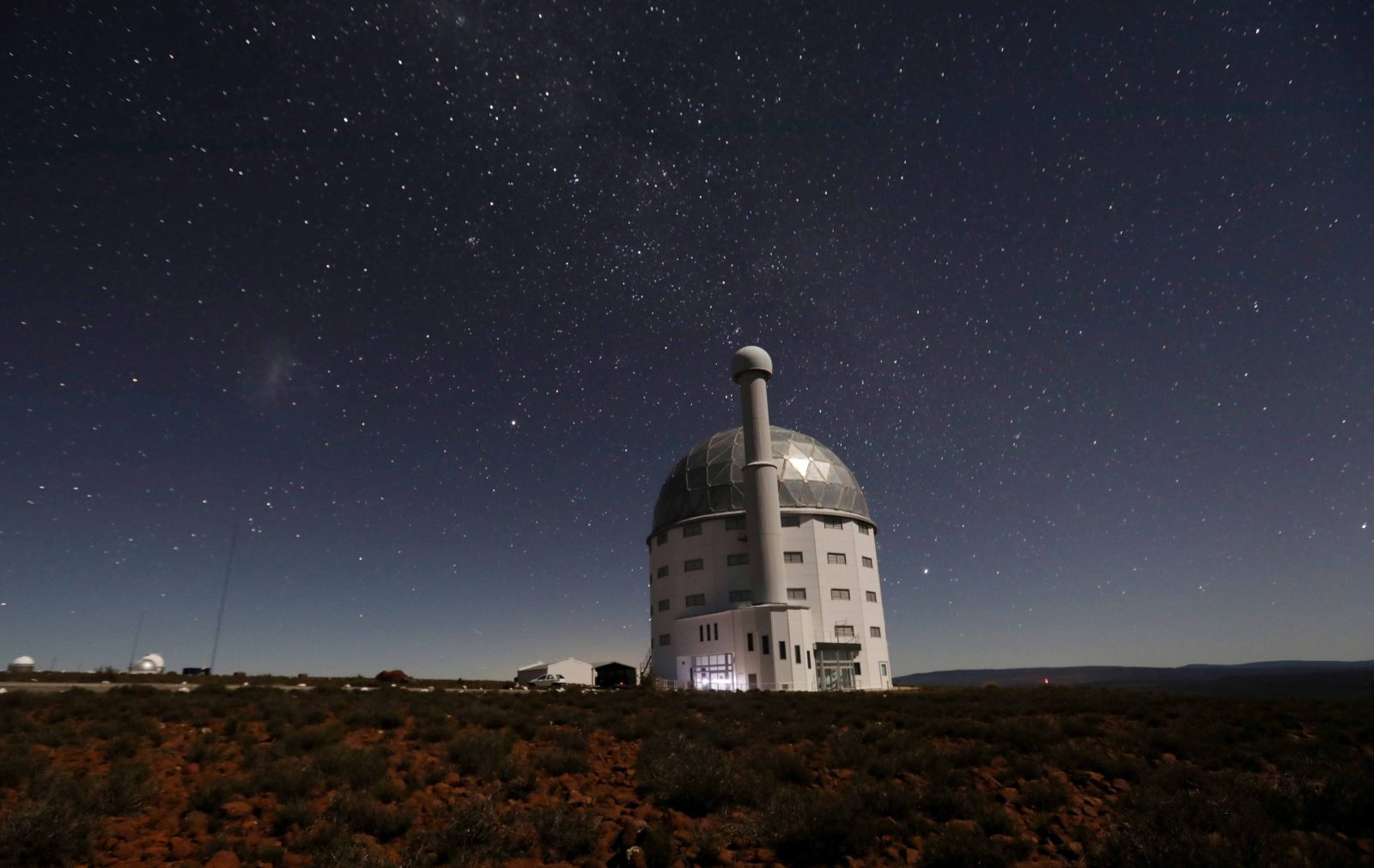 A starry night at the Southern African Large Telescope on July 07, 2018 in Sutherland, South Africa. Guest houses in the area where inundated with visitors wanting to experience record-breaking snow, spread out over parts of the Western, Northern and Southern Cape. (Photo by Gallo Images / Sunday Times / Esa Alexander)

South Africa’s approach to space operations seems grounded in research contribution, skills development and job creation – not exactly the kind of glamorous exploration work that creates celebrity space entrepreneurs like the Musks and Bransons of the world. Or is it?

“What the first colonisers will do on Mars is really the pinnacle of four billion years of evolution,” claimed theoretical physicist and self-described “aspiring extra-terrestrial”, Dr Adriana Marais, in 2015. She had just been shortlisted as one of 100 candidates on the now-bankrupt Mars One expedition to put the first human settlers on Mars by 2025.

Yet, six years later, Marais is more determined than ever. “I plan to contribute to and join the early missions to Mars,” she says.

“Never before has Mars felt so close, with the UAE, China and the US arriving there successfully this year, and in particular with all the high definition footage of the surface of our neighbouring planet that we are able to interact with on social media here on Earth.”

As South Africa’s most ambitious advocate for interplanetary living, she is currently in the process of launching a project called Off World, which she describes as “a series of habitational experiments in the most extreme environments on the planet to prepare for life on the moon, Mars and beyond”.

Not unlike one of the last iterations of Mars One, Off World will take the form of a documentary series that tracks a group of resilient people as they learn to build a community from nothing.

Marais says, “We are currently in the pitch phase to major global broadcasters including Netflix and National Geographic. In the next few months, we will be announcing the location and the team for the launch of the Off World Project, a 40-day experiment in the oldest and one of the driest deserts on Earth. Hint: it’s somewhere in Africa.”

Her sights aren’t only set on the red planet: she is also currently one of the directors at the Foundation for Space Development Africa which in 2015 launched a crowd-funded project to spearhead Africa’s first mission to the moon, called Africa2Moon.

The organisation’s sights have shifted for now to focus on a project called “moon balls” – a telescope designed to reach the far side of the moon.

Marais says it will be the first African-built technology to “perform first-time science on another celestial body”.

The South African National Space Agency (Sansa) stated their support for the project at the time, but there is no evidence that any funding was offered.

“If we were waiting for government, we may have been waiting another 50 years to return to the moon. Current developments, like the reusable launch systems developed by SpaceX, are driving progress in the US space industry through public-private partnerships. A more collaborative environment between government agencies and the private sector could also provide stimulus to the space industry here in South Africa,” she adds.

Instead, it seems most of our national space industry goals are more focused on earthly ground, with most investment and funding going towards ground stations and specialised engineering of satellite components. China’s moon rover included an imaging component built in South Africa, and NASA has recently sent a South African-made audiometer to be used on the International Space Station.

Last year, at the Sustainable Infrastructure Development Symposium (Sids), President Cyril Ramaphosa presented the 14 projects out of 276 that had caught private investor attention and commitment – one of which was a space hub with an additional six satellites.

Ramaphosa iterated that the Sids projects were designed to bring about change in their industrial industries.

“We will use this programme to support black infrastructure service providers in much the same way as we have supported the emergence of black industrialists. This is an industry which needs to be transformed in terms of ownership, participation, capabilities and skills,” he said.

Sansa has been given R4.5-billion in investor funding for the development of the hub, which CEO Val Munsami confirmed would be built in the next three to four years.

In May this year, at the SpaceOps biennial event which was hosted, albeit virtually, by an African country for the first time, Munsami expanded on South Africa’s “space agenda” in his keynote address.

He confirmed that Sansa is looking to build a second ground station specifically for deep space missions in the future, and reiterated the importance of space operations in the space industry, saying that we can offer “the glue that brings it all together”.

South Africa will soon be home to part of the biggest radio telescope ever built. The Square Kilometre Array (SKA) will operate across South Africa and Australia, and South Africa’s SKA Observatory (SKAO) is already active.

South Africa hosts 64 satellite dishes that make up the SKA precursor, the MeerKAT instrument. The country will also be home to 197 more dishes as part of the SKA, while Australia will host 131,072 antennae. The instruments will work together to receive radio frequency data that will go to SKAO member countries all over the world, including Netherlands, Portugal and the UK.

Higher Education, Science and Innovation Minister Blade Nzimande commended the launch of the Observatory, saying, “we are excited by the fact that the SKA Observatory will be the first, and only, science inter-governmental organisation where Africa will play a strategic leading role.”

Munsami, at the SpaceOps conference, also spoke about the growth of South Africa and Africa’s space industry, noting that in 2020, space budgets for the continent have doubled from the previous year to $490-million in total.

He added that by 2024, they are expecting 110 new satellites to be brought online by African countries, compared to the 24 that have been launched from the continent so far.

There is already evidence of what South Africa’s investment into satellites could mean for the country, generating original data that can help to mitigate both natural and man-made disasters.

In July, following the unrest and looting in Gauteng and KwaZulu-Natal, Sansa was able to provide information about the scale of the damage and exact locations experiencing destruction.

In a statement on the topic, the organisation states: “Social development continues to be at the centre of Sansa’s reason for being.”

South Africa’s approach to space operations does seem to reflect that sentiment. It’s grounded in research contribution, skills development and job creation – not exactly the type of glamorous exploration work that creates celebrity space entrepreneurs like the Musks and Bransons of the world.

Marais believes there is room for both.

“The challenge we face as a society, particularly in developing countries, is to balance ambitious goals that inspire us to dream, like the first human communities on the moon and Mars, while simultaneously uplifting people living in harsh conditions here on Earth, and encouraging a rapidly growing population of youth to get excited about exploring and learning. The good news is that we can do these simultaneously.” DM/ML