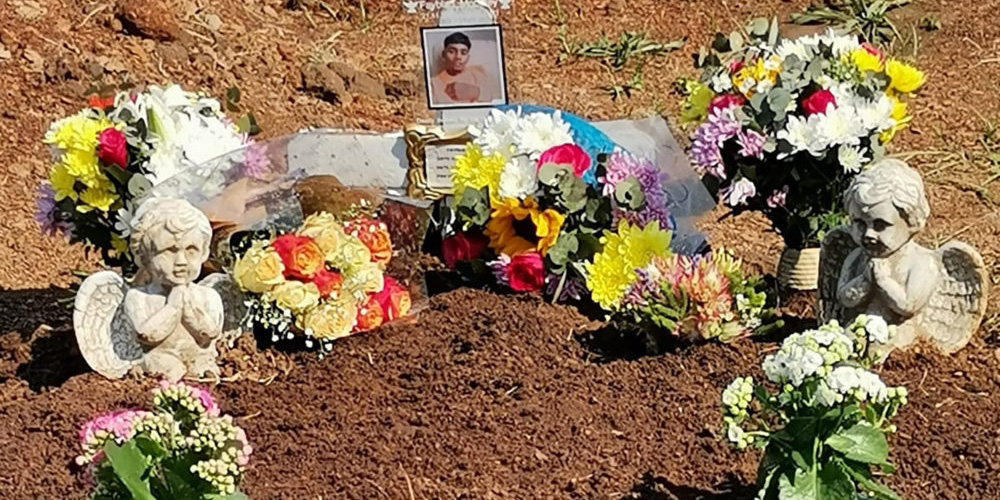 Faybian Moodley (17) was fatally shot while out with other residents protecting their property from 'looters’. (Photo: Supplied)

Two months after their relatives were shot or butchered during the violent unrest and looting which swept through parts of Gauteng and KwaZulu-Natal, families are still no closer to knowing who caused the deaths of their loved ones.

In KwaZulu-Natal, where many of the deaths in July’s unrest occurred, MEC for social development in the province, Nonhlanhla Khoza, said her department was providing psychosocial support to affected families. She said a team of social workers was helping people come to terms with the violent deaths of their relatives.

However, apart from the fact that none of the families Daily Maverick spoke to had heard from the social workers two months down the line, the main concern for most is that they had heard nothing from the police either.

Bhekinhlanhla Shandu narrowly escaped death when his car was attacked at a roadblock in Phoenix. He had about half a dozen people in the vehicle, three of whom have never been found.

“Nothing has changed… there is no feedback. Nothing new,” Shandu said. The last time he heard from the police was when they took a statement from him.

“Are we part of this country or are we just a number here?” Tashleen Moodley from Durban asked. Like Shandu and others, Moodley said she hadn’t heard from the police until she called a colonel requesting feedback. She was then connected with the person in charge of her son’s case. Moodley’s 17-year-old son, Faybian, was shot while out with other  community members defending their property against “looters” north of Durban.

“Shots were fired and my son was hit in the crossfire,” Moodley told DM168 more than a month ago.

The feedback she received from the investigating officer was that there was nothing concrete but he said he was “connecting the dots”.

Moodley’s son was shot from a distance. The bullet ripped through his heart and lungs. Faybian was one of the few people of Indian origin who died in KZN. Mortuaries confirmed that most of those who died were African males.

During a visit to KZN in the aftermath of the unrest, Police Minister Bheki Cele committed to a number of undertakings. Cele said 10 specialised detectives would be roped in from the district and province to work on solving the murders. Cele also said it could be necessary to enter into negotiations for specialised courts to facilitate swift justice. He also said police conduct during the unrest would be investigated.

The minister said some security companies would also be investigated for “misbehaviour”.

Cele’s spokesperson Lirandzu Themba told Daily Maverick on Monday that the number of specialised detectives was increased from 10 to 31 and that “they have made a couple of arrests”.

Families insist that they have heard nothing from the police.

“It has all gone quiet,” said Philisiwe Ngcobo from Phoenix. Ngcobo’s brother Bheki was shot at while in his car, then dragged from it and beaten to death. Ngcobo also denied the family was provided with psychosocial or any other kind of support. She told Daily Maverick that social workers had called her in uMhlanga but she said they were not government social workers and they wanted to know what had happened to her brother.

Ngcobo said the family was still in the dark regarding her brother’s brutal killing. This is despite a police statement on 15 August acknowledging Cele’s “series of feedback meetings” in the affected areas. Residents from the violence-hit areas in Phoenix and Chatsworth say they have not heard from police.

Regarding the establishment of specialised courts to deal with those behind the unrest, Lirandzu Themba said this was beyond the discretionary powers of the police and depended on the JCPS cluster. She said minister Cele had said this would be considered if there was a need and if the system was burdened. Asked if in her view there was such a need, Themba said: “Not as far as I know, but possibly the department of justice can shed more light.”

Terrifying scenes of violence and looting swept through Gauteng and KZN in July, supposedly to demand the release of former president Jacob Zuma from the Estcourt prison where he was serving a 15-month jail term for contempt of court.

Criminal elements are thought to have taken advantage of the situation, putting it beyond the control of law enforcement agencies.

Authorities at the time said 12 instigators had been identified as having perpetrated the violence, but questions have since been raised whether these so-called instigators actually exist.

Shandu said he does not believe they will get justice or support considering there had been no communication from the authorities. The lack of support for affected families is taking a toll on some.

“Sometimes I just feel like ending my life because I simply cannot cope with the death of my son. I feel like I’m having a mental breakdown,” said Moodley.

Moodley said her husband had lost his job because he was taking the death of their son very badly. She said her own performance at work had taken a very bad knock and that her children were also not coping. “My 14-year-old daughter hasn’t been to school since Faybian’s death. It has taken a toll on the entire family,” said Moodley.

As they struggle for justice and support after their loss, Moodley and the rest of her family spent a day at her son’s final resting place last week, marking two months since his death. DM\

Update on Wednesday, 15 September, 2021:  A civil rights movement calling itself Phoenix Justice Project has written to the National Prosecuting Authority (NPA) seeking justice for the families.

“We seek a detailed report of those that were arrested in the Phoenix and surrounding area for the alleged crimes committed. We also seek information on the murders committed in the Phoenix and surrounding areas like Tashleen Moodley who lost her son in the riots, Fabian Moodley, LeeAnne Damons who lost her father, Gans Reddy who was patrolling and serving his community and many others. A list will be compiled and a further application will be made to your office in terms of the Promotion of Access to Information Act (PAIA) and Promotion of Administrative Justice Act (Paja),” read the letter, a copy of which was released to the media.

The group, describing itself as a civil rights movement that was contacted by the families mostly from the greater Phoenix and Verulam area, also condemned the release on bail of a number of alleged instigators of the July violence and looting.

“The PJP would like to know why double standards are being applied by the National Prosecuting Authority as the Phoenix accused are being discriminated against by not being afforded a speedy trial. Furthermore, there are videos circulating of a Special Task Team assaulting alleged suspects and homes being raided and ransacked without a warrant. This has traumatised the children and community at large,” read the letter.

The letter further read: “The families of the Phoenix accused are being severely prejudiced as some of the accused are breadwinners and this is compromising the well being of the families.” DM