Double whammy: Magashule hits a cash crunch and loses the right to appeal against the ANC’s step-aside rule 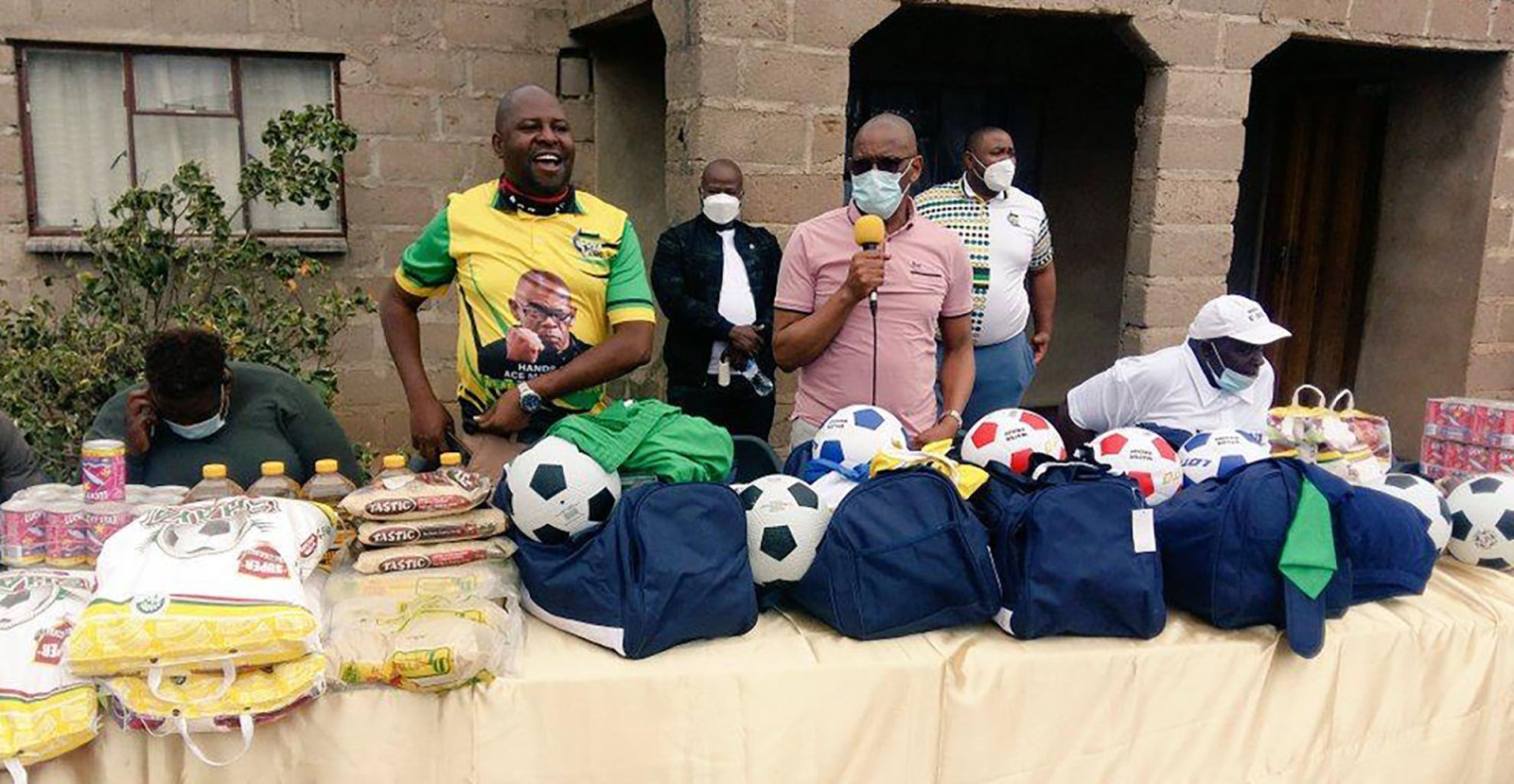 Photo shared by the @_Africansoil twitter account of suspended ANC SG Ace Magashule, he is seen in Mpumalanga on the campaign trail in Mpumalanga in August 2021. (Photo: Supplied)

The suspended ANC secretary-general is likely to take his suspension from the party to the Supreme Court of Appeal after losing a high court bid to declare the ANC’s step-aside rule illegal.

Ace Magashule appears to be entering a financial black hole as his lawsuits mount. The Sunday Times this weekend reported that students he sponsored to study in Istanbul, Turkey, were sleeping rough after he stopped paying their residence fees. South African Embassy officials in Ankara are personally paying for the students’ stay in low-cost accommodation until the matter is sorted out.

Magashule uses bursaries for students as part of his patronage-building. He recruited the students while on a campaign trail, they told the Sunday Times, and this method also featured prominently at the Commission of Inquiry into State Capture. Former Free State MEC Mxolisi Dukwana testified how Magashule used to tap provincial tenderpreneurs to pay for bursaries to keep his networks running and build his personal profile.

Weekend reports revealed that students sponsored by Magashule’s foundation were sleeping rough after being evicted when their sponsor stopped paying their dorm fees. Magashule owes the Bogazici Student Dormitories R13-million.

This suggests that Magashule’s funds are facing strain as he racks up legal costs. On Monday the Gauteng High Court denied his right to appeal against his failure to have the party’s step-aside rule declared unlawful. In July Judge Jody Kollapen, for a unanimous Bench, found that the ANC precautionary suspension clause for members charged with suspension is constitutional.

Magashule filed an appeal request, but it failed on all grounds, as did Magashule’s request to file new evidence. The judges said that the courts had raised the bar or threshold for granting leave to appeal. Advocate Dali Mpofu, who was lead counsel for Magashule, failed to clear the bar.

Mpofu charged that the three judges had shown bias in that they should not have granted the ANC condonation (late filing of papers) and that they had failed to apply their mind to a request to strike out documents filed by the ANC and President Cyril Ramaphosa. The three judges are Kollapen, Edwin Molahlehi and Sharise Weiner. Kollapen wrote the judgment and the order, with his two colleagues concurring.

The judges dismissed the application for appeal on all three grounds and were particularly critical of Mpofu’s allegations of bias. The denial of appeal order said that while Magashule’s written papers had alleged “actual bias”, his argument in court had pivoted on “perceived bias”.

“There were no political imperatives which influenced our decision, nor did we prejudge the issues before us. We, therefore, reject the applicant’s contentions that we displayed bias, either actual or perceived, and do not believe that a higher court would come to a different conclusion.

“The accusation of actual bias accompanied by collusive conduct on the part of judicial officers to reach a predetermined outcome is a gravely serious one to make, and while no one should be precluded from advancing such a complaint, the integrity of the judiciary and the judicial system must require that such allegations be adequately supported when they are so advanced.

“The court thoroughly analysed each material issue and came to a conclusion based upon the facts and the law applicable. The fact that the applicant may disagree with the factual findings of the court, even if such disagreements are copious, does not lead to the ineluctable conclusion that the court was biased,” the judges said.

Magashule is likely to try to appeal this decision to the Supreme Court of Appeal, and he is also back in court in October on extensive fraud and corruption charges which go back to his heyday as Free State premier.

Magashule retained four counsel and a firm of instructing attorneys for the ANC step-aside case; he is likely to use a similarly sized team for his criminal case as the stakes are high for the man who wants to take a run at the position of ANC president at the party’s next elective conference, still scheduled for 2022.

This campaign is likely to cost hundreds of millions of rands as it includes gifts, food and logistics. It cost President Cyril Ramaphosa and his funders almost R1-billion for Ramaphosa to become ANC president in 2017. The ANC, using the step-aside rule, will probably not allow Magashule to take a run at the party presidency, but he is likely to contest this too – a legal fight that will also cost him.

A blesser no more?

Magashule’s defence in the criminal case is that he did not take a cent from the government. However, evidence before the Zondo Commission revealed the mechanism by which he operated when he was Free State premier. Dukwana told the commission how Magashule’s office used two provincial businesspeople allied to him as a conduit for funds, including bursaries. The two businessmen were Igo Mpambani, who was killed in a hit, and Edwin Sodi, who is on trial with Magashule.

A parallel system of politics and patronage building is captured in this summons the commission issued to Moroadi Cholota, who was Magashule’s PA and who administered the system. Dukwana said that Magashule acted like a “blesser” – a term used to describe an older man who gives material goods to young women to win their hearts. He used the word differently about the suspended ANC secretary-general.

He told the Zondo Commission that, “[In the] old ages you would use Father Christmas but now you, you know, it is a blesser in the sense that you agree to request that personally you are not able to do but you facilitate this on behalf of other people.

“And – and worse it comes from the – the service provider that is working with the – with your government. So, you know, it is taking this – you giving and taking it and giving there so that you will be seen to be this person who would do everything to demonstrate that you care, but at the expense of the public resources that are acquired fraudulently.”

Magashule is said to be wealthy, and he kept separate offices (to his ANC office at Luthuli House) in Sandton from where he ran his business, sources have told Daily Maverick.

But he appears to be under pressure as the National Prosecuting Authority and the Special Investigating Unit are steadily turning off the taps of patronage with several key prosecutions. In addition, the Political Party Funding Act has also made bent businesspeople more aware of how their political funding is increasingly being monitored by authorities. DM