By Nokulunga Majola for GroundUp• 14 September 2021 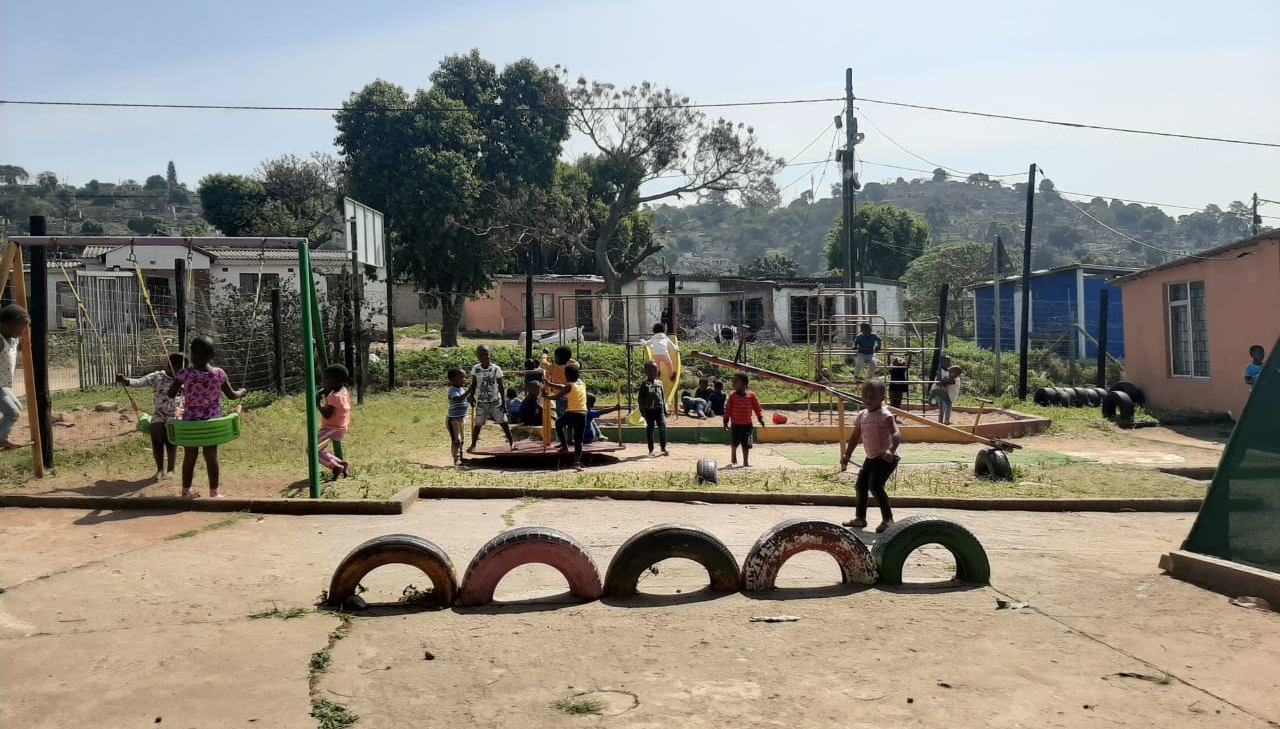 Children play at the Inkanyezi Early Education Childhood Centre in Amaoti in Inanda, north of Durban. This centre is registered but many are not, and owners say registration is difficult and onerous. (Photo: Nokulunga Majola)

Crèche owners say registration is difficult and they get no help.

The death of a five-year-old in a pit latrine at a Durban crèche prompted angry comments about illegal creches from KwaZulu-Natal Social Development MEC Nonhlanhla Khoza. But crèche owners say registration with the department is difficult and onerous and they get no help.

Five-year-old Elihle Nyembe was found in a pit latrine at the Little Flower Crèche in Thornwood, Durban, on 31 August.

Her mother Nana Nyembe said that when Elihle did not come home with her brother, a search had been conducted but the child had not been found. “We went looking for her everywhere but we did not look at the toilet because we were told the toilet is for teachers and there is no way she could be there. The next day they pulled her out of the toilet,” said Nyembe.

“Elihle was joyful, she was young but you could see in her eyes that she was wise. I wish you could see what a beautiful person she was,” said Nyembe.

In a statement on 5 September, MEC Khoza said the crèche was not registered. She said people who continued to operate illegal Early Childhood Development centres in the province put the lives of children at risk.

“We warn people to desist from operating illegal ECD centres, crèches and daycare centres or face the full might of the law.”

But owners of crèches we spoke to say registration requirements are difficult to meet.

A 56-year-old woman who runs an unregistered crèche in Verulam, north of Durban said she has been trying since her crèche was established early last year to have it registered but without success. “There is a certificate they told me I need to have but I cannot afford to pay for it. There are other things that are required like junior toilets, and many other things that I cannot afford since I don’t get any funding. The money parents pay for me to look after their children only covers food and other little things we might need,” she said.

She said many people don’t have access to information and lack the resources to run a fully compliant crèche.

Another crèche owner said most people operate crèches because they want to help people in their communities. “I have a lot of space in my yard so I thought why not build a big room that I can use as a crèche. We do this because we love children and we also want to help parents who don’t have anyone to look after their children while they are at work. The Department of Social Development should host a workshop to help people like us understand how it works and also assist with some funding so that we can be compliant,” she said.

Thuthukile Mhlungu, who runs Inkanyezi Early Education Childhood Centre in Amaoti in Inanda, north of Durban, said the centre was established and registered in 2009 but only got the registration certificate in 2017. “It is a long process and everything has to be up to standard when running an ECD centre. We found an old building that we had to renovate, which was a big challenge since we didn’t have funding. But now we are getting a conditional grant from the Department of Social Development which helps with salaries and groceries for the little ones. It doesn’t cover maintenance, but we are coping,” Mhlungu said.

A crèche or ECD centre — defined in the regulations as “a place for the care of more than six pre-school children for part of the day or night”, must be registered with the provincial government and must be managed and maintained according to the Guidelines for Early Childhood Development Centres. It must provide a safe environment for children, proper care for sick children, adequate toilet facilities, adequate space and ventilation, safe drinking water, measures to separate children of different age groups, and a hygienic area for the preparation of food, among other things.

KZN Social Development spokesperson Mhlabunzima Memela said ECD Centres are registered as Partial Care Facilities if they comply with Norms and Standards for Registration as stipulated in the Children’s Act. Then the centre can register an Early Childhood Development Programme in compliance with the Norms and Standards, also as stipulated in the Children’s Act.

“Even if an ECD centre is run privately, it must still register in terms of the Children’s Act,” he said.

Also, staff at a registered ECD centre or crèche must be vetted by the department to ensure that they are suitable to work with children, Memela said.

He said the Little Flower Crèche was registered as a non-profit-organisation (NPO) but was not registered under the Children’s Act. “People make the mistake that just because they are registered as an NPO they are fully registered but that is not true.”