This weekend we’re watching: How China and the US spun the Covid-19 narrative 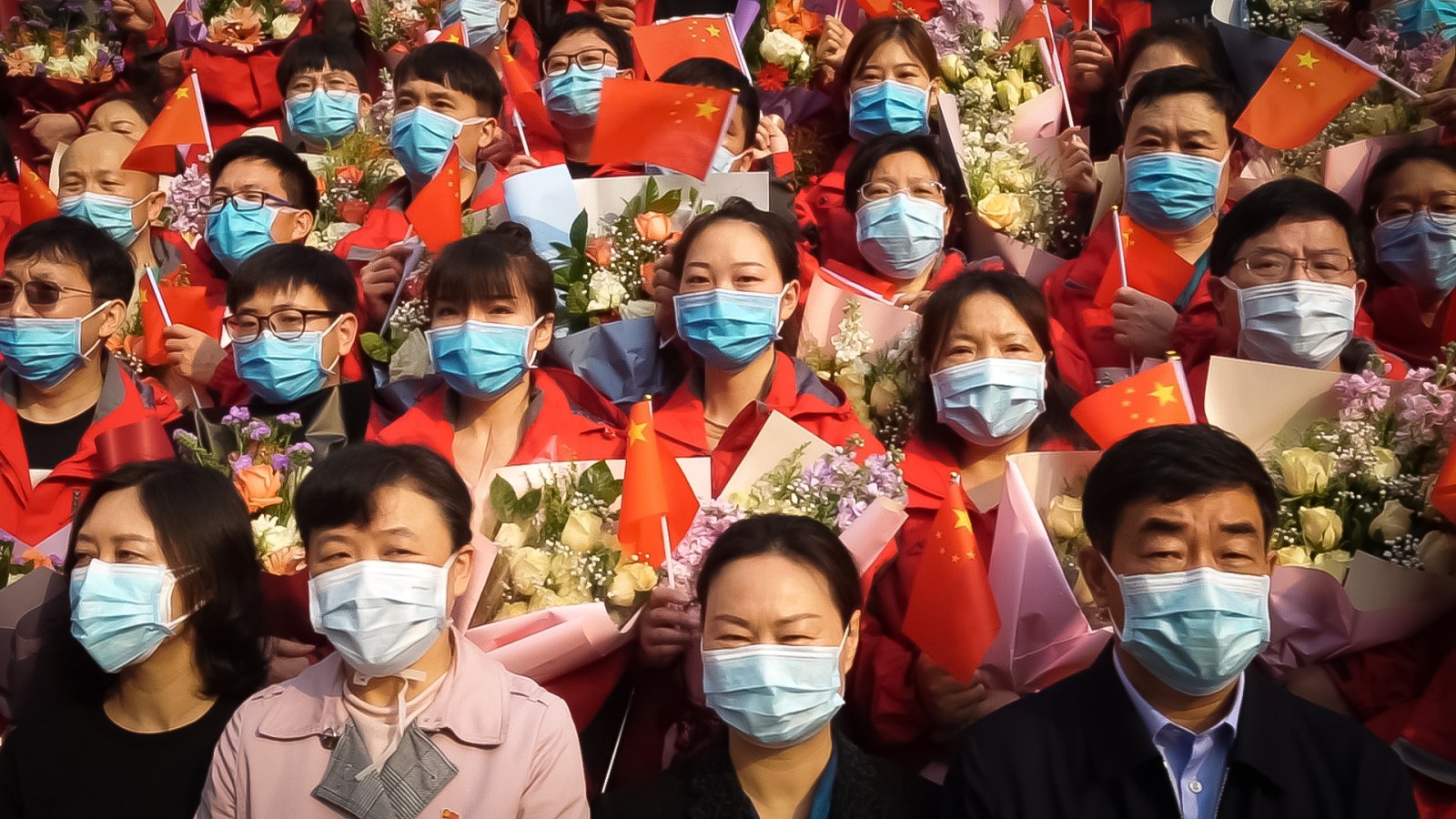 In the same breath. Image: Showmax

‘In The Same Breath’ is a 2021 documentary comparing the parallel misinformation campaigns by US and Chinese authorities during the early stages of the pandemic.

In the Same Breath is a cerebral documentary directed and narrated by Nanfu Wang. The clever title alludes to both the coronavirus and the hypocrisy of the political leaders who manipulated the narratives around it. Born and raised in a town near Wuhan and having lived in America for nine years, Wang is perfectly placed to analyse the complicated dynamics of the virus breakout in the two nations.

Wang’s gonzo reporting is honest and straightforward. Rather than feign objectivity, she bares her heart and shares her own story, allowing the audience to place her ideologically, and come to trust her.

She decided to make documentaries after she had to take care of her sick father as an 11-year-old and the anger that followed when she was ignored by hospital staff, which eventually led to his early death; controversies around the handling of the coronavirus breakout, and the lack of hospital beds when the pandemic spread, hit her close to home.

“Eight people have been punished for spreading rumours about an unknown pneumonia.”

We begin with the jubilation of an enormous New Year’s Eve light spectacle for the countdown to 2020 in Wuhan. You won’t find footage of this celebration on YouTube. The slow ringing of the bells ushering in the new year has an ominous tone only audible after the fact – the thousands cheering in the streets have no idea what is busy spreading between them, nor how anxious they will come to be in a crowd. They are tragically oblivious to the doom that 2020 will bring, and the balloons released gleefully into the atmosphere are like so many lives that will be lost in the coming year.

The very same day, another message was released in the media from the Wuhan police. “Eight people have been punished for spreading rumours about an unknown pneumonia.”

It later became clear that those eight people were doctors, the first to confirm that the virus was a coronavirus genetically related to SARS.

A clip in the film showing nine news anchors simultaneously delivering word-for-word warnings to the public feels straight out of Orwell’s 1984: “Obey the laws and regulations for online activities,” they say in robotic unison. This is not the only news anchor montage in the film. Wang uses the homogeneity of Chinese news reports to demonstrate the futility of government-censored media.

Wang returned to the US from China just before Wuhan was locked down, but her two-year-old son, who she had been travelling with, was still in China with his grandmother.

Anxious about her family’s safety, she trawled news broadcasts to get a better understanding of what was going on, but Chinese media were focused primarily on frivolous government ceremonies, even as social media was ablaze with videos of people dying on the streets (videos which were quickly taken down by government censors).

For three weeks after the eight doctors were punished the government confidently announced each day that the virus was not contagious and there were no new cases. From January 6 to 18, the annual people’s conference was held in Wuhan. An occasion marked by grand speeches for the coming year, it would have been an “inconvenient” moment to admit that China was facing a highly contagious virus.

Horrified that so many people were unable to get care in China, Wang tried to get Western media outlets to take on the story. Failing to persuade them, she reached out to licensed journalists in Wuhan to covertly collect the footage that forms the backbone of this documentary.

Much of the film has the swelling dread of horror, but the undercover journalists add the anxious excitement of a heist film. Much of the early footage they captured in the hospital was of people being too afraid to speak about their condition.

Most doctors, and even the journalists themselves, insisted on only positive stories, citing fear that the “imperialists” in the West would use the virus as an opportunity to defame China, an over-toed line that is sometimes regurgitated propaganda but sometimes code for “I’m scared of the Chinese government’s retribution”.

In 2019, Wang released a documentary about China’s infamous one-child policy called One Child Nation. Investigating such a sensitive topic in a highly censored country is no easy task, but Wang circumvented censorship with guts and creativity. In the Same Breath exhibits the same bravery and ingenuity.

There’s footage of an old man begging the cameraman not to leave; a father weeping for his semiconscious son who he’s not allowed to see; and a family trying to decide whether to take a loved one home to die or keep her on the pavement outside the hospital in hope that a bed will free up.

People connect to other people far better than numbers. Wang gives the statistics faces and names, because that’s what is needed to truly grasp the gravity of their suffering.

Wang deals with the fear to speak ill of the government using sarcasm. A private clinic owner spouts ridiculous praise of the glorious nation while sobbing over the death of her husband. The father who was prohibited from seeing his dying son, with venom in his voice, says: “I’m so very moved by the government… they even gave me $100. They said that my situation was tragic and wanted to express sympathy with $100.”

The governments’ PR solution to all of this devastation was broadcasting non-stop “positive” Covid content: TV documentaries and public service announcements with titles like Life Matters, Fighting the Covid-19 pandemic, and Chinese Doctors – Angels in White. Wang explains how travesty is spun so that it actually bolsters patriotism.

“When I lived in China I remember feeling moved watching these kinds of state TV broadcasts about regular people overcoming adversity, but I don’t remember ever questioning where this adversity came from in the first place, or why the government’s propaganda department was showing it to me. But now it’s clear that when the government is telling us where to look, they’re also telling us where not to look.

Exactly halfway through the film, Wang pivots towards her experience of the American response to the coronavirus, which similarly was characterised by denial denial denial, right up until the point where New York went into lockdown.

“I had fully bought into the idea that America was too advanced to suffer an outbreak like China’s,” Wang admits.

America seemed to be prioritising saving face just as much as China. American former nurse Adam Witt suggests in the film that the CDC guidelines were jimmied to fit whatever the government was able to supply, so as not to reflect badly on their capability to protect US citizens.

“The first few weeks of it, the CDC standards were changing almost daily, and it was not based on science but based on supply, and every day you’d come in and there’d be a new standard.”

Other American nurses speak about how, as a result of these CDC’s recommendations, they were targeted for taking extra precautions and weren’t given the proper training they needed to deal with Covid-19 patients.

Wang shines a respectful light on the unique trauma of anyone in front of her camera. One of the most powerful scenes is a sequence of headshots of anonymous Chinese doctors and nurses trying to hold back their tears and keep it together amid the ongoing nightmare faced by medical professionals around the world.

Be warned that some of the footage is upsetting. The artful slow-pan camerawork and eerie soundtrack are fittingly spine-chilling. Even those people who aren’t experiencing Covid-19 in their community currently are still trying to process the weight of what has happened, and Wang puts it in perspective with unwavering frankness.

She lays out the story concisely and with just the right amount of contemplation and metaphorical colour. Her narration is dispassionate, but her words give the sense of intense hurt and anger under the surface. She lets the emotional footage make her points for her. DM/ ML

In the Same Breath is available in South Africa on Showmax from 6 September. Nanfu’s previous documentary, One Child Nation, is available on Amazon Prime video.
You can contact This Weekend We’re Watching via [email protected]