Letting go of architecture in favour of art 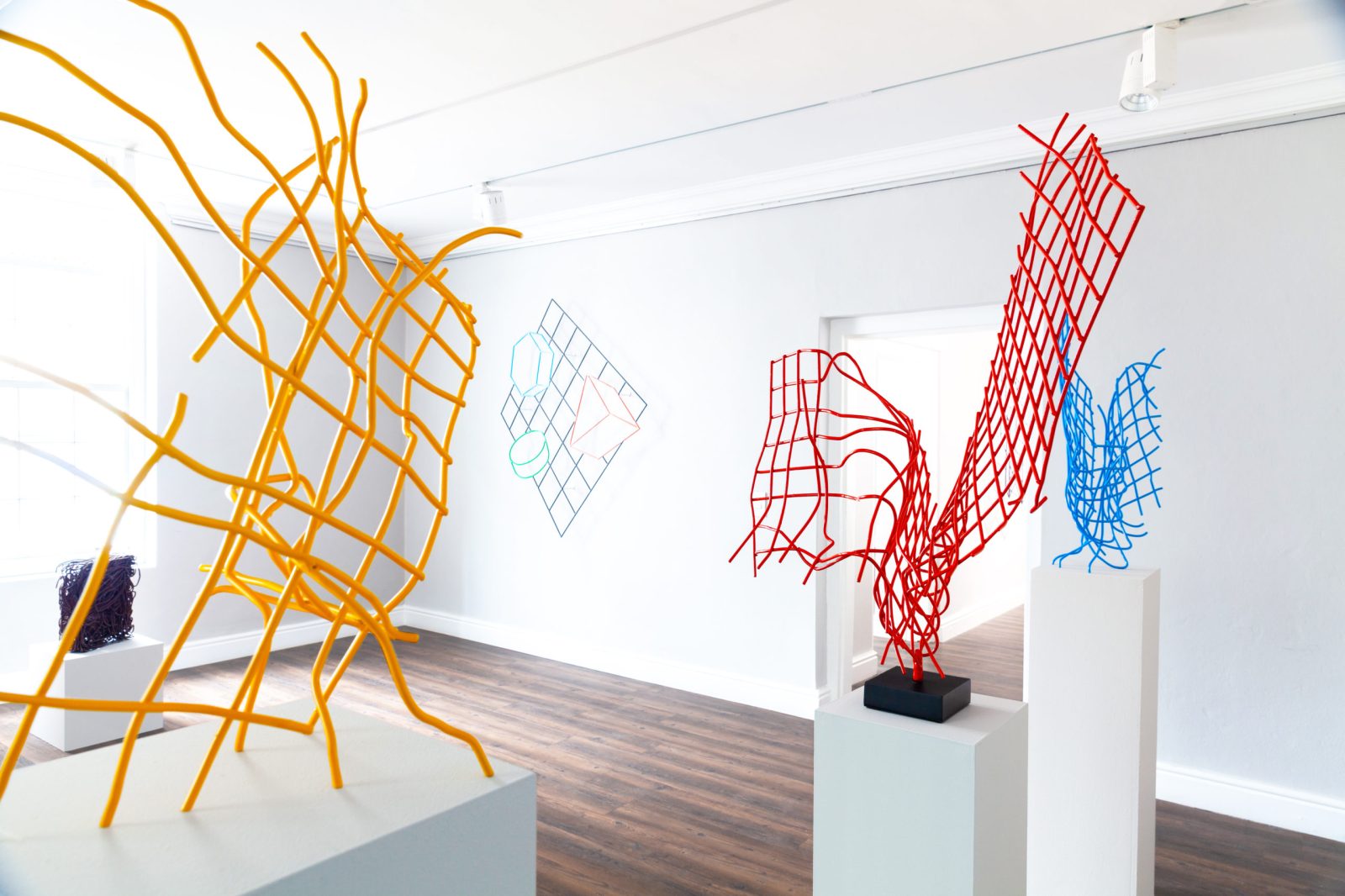 In his ‘XYZ’ exhibition, Gaelen Pinnock invites viewers to reassess our perception of space, pushing further the idea that ‘every paradigm needs questioning’.

“I find myself stuck in between two verses. And there’s a part of me that wants control. It’s like, well, what’s it going to look like? Are you going to 3D model this? Make it perfect, you know? But the other side of me just wants to delight in the process and make a mess and see what comes out of it and not really have an end product in mind… I just wanted to delight in form and colour.”

Architect-come-artist Gaelen Pinnock has always had an affinity for the intersection between design and art. As a teenager, he felt confident that becoming an architect was “the thing he wanted to do”. Pinnock was, and still is, drawn to the “design way of thinking” that underpins the architectural process; the notion that a “fairy concept” – as he puts it – can be transformed into some kind of aesthetic and functional outcome in the real world.

Yet, Pinnock has recently found this practical way of thinking, now so deeply ingrained in him, to be a limitation in his budding journey towards more uninhibited and less prescriptive artistic expression – a path that he is now openly trying to embrace.

Pinnock graduated from the University of Cape Town with a degree in architectural studies in 2005 and went on to practise his craft for several years, first in South Africa and later in England. Reflecting on his days as an architect, he admits: “There was a part of me that was always a bit more of an artist, not more of an artist, but also an artist.”

While working for a large firm in London, Pinnock became increasingly disillusioned with the profession and began to have what he describes as “a crisis of meaning”.

“The firm I worked for in London did some very cool educational buildings, but leading up to the recession it became more and more commercial. They were building malls in Russia and Turkey, and all sorts of things that the world really didn’t need.”

After resigning from his job in London, Pinnock began exploring European cities through a new medium: photography. Inspired by the work of Italian architect-turned-photographer Gabriele Basilico, Pinnock started capturing images of cityscapes, particularly “the ones that no one wanted to look at”.

“I was fascinated by this modernist programme of social housing, this kind of utopian endeavour that had failed to an extent. A lot of these abandoned social housing buildings are megalithic, monolithic, brutalist sorts of structures. They felt so twisted in their current state but yet were viewed with so much optimism in their time.”

In 2013, his photographic search for meaning in urban landscapes culminated in an exhibition of the images that he had captured throughout his exploration of Europe. This was a real turning point in Pinnock’s career.

“I was like, wow, I just love this. I love the kind of raw expression of ideas in art and photography… And that was the beginning.”

Pinnock’s transition into the art scene did not imply an abandonment of his architectural erudition. He concedes: “I still feel like somewhere in me, I’m an architect. It still informs how I think, how I see, how I look at the city, and so I don’t feel like I’ve lost that.”

Most of the artist’s work is characterised by its insightful commentary on the manifestation of power dynamics in the built environment. In the South African context, these structurally embedded power dynamics are evident through the enduring legacy of colonisation and apartheid; through spatial planning and separatist policies which continue to ostracise already marginalised groups. “That stuff still dictates how people move in our cities, how they interact, where they feel welcome.”

That being said, his XYZ exhibition, which is on at 99 Loop until 25 September 2021, deviates from his usual exploration of politically tainted urban landscapes and moves towards the exploration of perception. For Pinnock, this departure from the “heavy” themes typically represented in his artwork, serves as an escape from the gravity of lockdown.

Most of the sculptures are constructed out of steel rods with zinc, bent into various shapes and forms, sometimes layered on top of one another and intertwined or welded together and then finished with a polymer resin coating.

The end result is a series of installations that play with and distort one’s sense of dimensionality. What, at first glance, appears to have depth and take up space, might in fact be two-dimensional. The only way to know for sure is to interact with the artwork; move towards it or away from it, shift to the side of it, walk around it, adjust your gaze or glance behind it.

For Pinnock, watching people interact with his art, the curiosity that it sparks in them is the greatest reward: “It’s just people’s surprise when they look at it and realise that it could actually be three-dimensional. They look at it and suddenly something pops into their mind and they take a step backwards. It’s like the brain has done a double-click into another realm that isn’t real. I love seeing that happen when people look at it.”

Although completely “apolitical” according to Pinnock, the sculptures are rich in latent meaning, reminiscent, in many ways, of his journey as a creative. XYZ has, to a significant extent, been about “letting go of some aspects of what it means to be an architect – and architecture is very much about control”.

Pinnock’s exhibition speaks to the idea that “every paradigm needs questioning”, including what has long been accepted as an irrefutable scientific truth in architecture – “the fidelity of Cartesian space”.

“I guess I have that side of my personality with a deep mistrust of authority and of things that people consider a given; I’ve never trusted anything that is considered a given.”

Perhaps the work most symbolic of Pinnock’s journey is his installation piece, Filament, which also happens to be one of his personal favourites. “I really love it because it’s completely unravelling, in a way. It’s just a complete negation of all that structure and control that I described.”

Ternary, which means “in three parts”, is another one of his favourites. “I like how the mesh casts a shadow on the wall behind it, it’s sort of semitransparent and, again, plays with space and form.”

When asked about what message he would like viewers of the exhibition to take home with them, Pinnock responded: “What you see is not necessarily what you get,” a statement that perfectly sums up both the quintessence of the exhibition and his developing journey as an artist. DM/ML

XYZ by Gaelen Pinnock is at 99 Loop gallery in Cape Town until 25 September 2021.