Gauteng and Limpopo have exited the third wave, minister announces 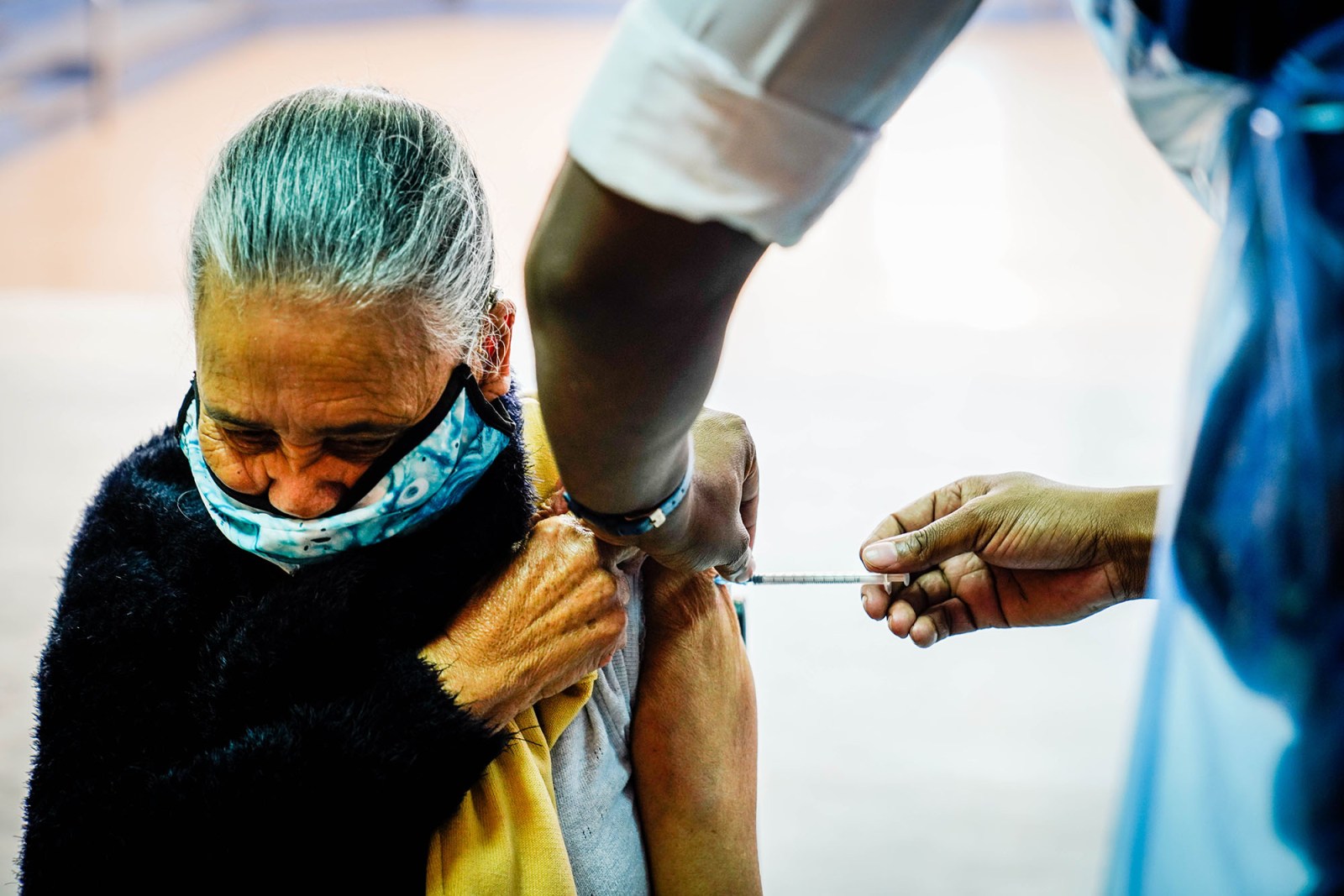 Betty Stride receives the Pfizer vaccine at the Ennerdale Civic Centre in Gauteng on 26 May 2021. (Photo: Shiraaz Mohamed)

Gauteng and Limpopo have now exited a third wave of coronavirus infections, Health Minister Dr Joe Phaahla announced on Friday morning. He said there has been a 24% drop in new Covid-19 cases nationally, but elsewhere in the country the numbers were still high.

Phaahla said that nationally there has been a 24% drop in new Covid-19 cases compared with the previous seven days.

However, the country still registered 6,270 new infection cases, but Phaahla said this also shows a downward trend as previously this number exceeded 8,000. He added that the positivity rate (the percentage of positive tests) is also coming down slowly, having dropped from 35% in July to 12% in September.

The World Health Organization’s standard for this rate is below 5% for communities to be safe. Phaahla said Gauteng and Limpopo reached this benchmark this week with a positivity rate of 4.4%.

“Still, there is no room for complacency,” he added.

The minister announced that from Friday people will be able to book their own appointments for a vaccine on the Electronic Vaccination Data System and would no longer have to wait for an SMS.

A digital certificate for all who were vaccinated would be launched in “just over a week”.

Phaahla added that fears that access to public services will be restricted for the unvaccinated are unfounded.

The acting director-general of the Department of Health, Dr Nicholas Crisp, said there have been problems capturing vaccinations because many sites at the beginning of the campaign still keep their lists on paper. Several thousands of cases had to be captured but a special programme had been introduced and this backlog had not been reduced.

“Many were not captured. We are working on back-capturing paperwork.”

Crisp said people who have not received confirmation that they were vaccinated must get in touch with the department’s call centre and report it.

“We will follow up and make sure you get an SMS,” he said.

He said the Western Cape and KwaZulu-Natal still have high numbers of new cases, with the Eastern Cape in third place.

Phaahla also announced that the country had vaccinated about 225,000 people by Thursday, but still falls short of the 300,000 goal set by President Cyril Ramaphosa. “But as soon as we get more Johnson & Johnson vaccines we will be able to go faster.”

More women than men are still getting the vaccine, Phaahla said, with 57.7% of those vaccinated being women. He said the latest myth that the vaccine will cause men to become impotent or sterile is nonsense and a scare tactic.

North West health MEC Madoda Sambatha said their numbers were also going down. The province currently had 7,121 active cases and registered 356 new cases in the past 24 hours.

They had started actively encouraging people to register and get vaccinated “and not sit around waiting for an SMS”.

“We say you must go immediately,” he said.

Dr Jeanette Hunter, the administrator of North West’s health department, said they only had one big challenge – vaccine hesitancy – since their efforts were well supported provincially and nationally.

They had managed to vaccinate about 24% of the adult population so far.

The province was working with the religious sector to dispel vaccine myths, and had asked local biker communities to help spread the pro-vaccine message.

Dr Lungi Nyathi from Business for South Africa said workplaces now have the capacity to vaccinate 150,000 people a day.

She said occupational health sites are giving the vaccine and there were 52 of these sites activated in the mining sector. Impala Mines had covered more than 80% of its workers already. Mining companies were also reaching out to mining communities through vaccination drives.

Nyathi said the taxi industry has been great in helping with vaccinations in the informal sector.

Crisp said they will be introducing a programme soon for undocumented people. DM/MC