Anti-vaxxers attempt to scupper efforts to vaccinate the homeless 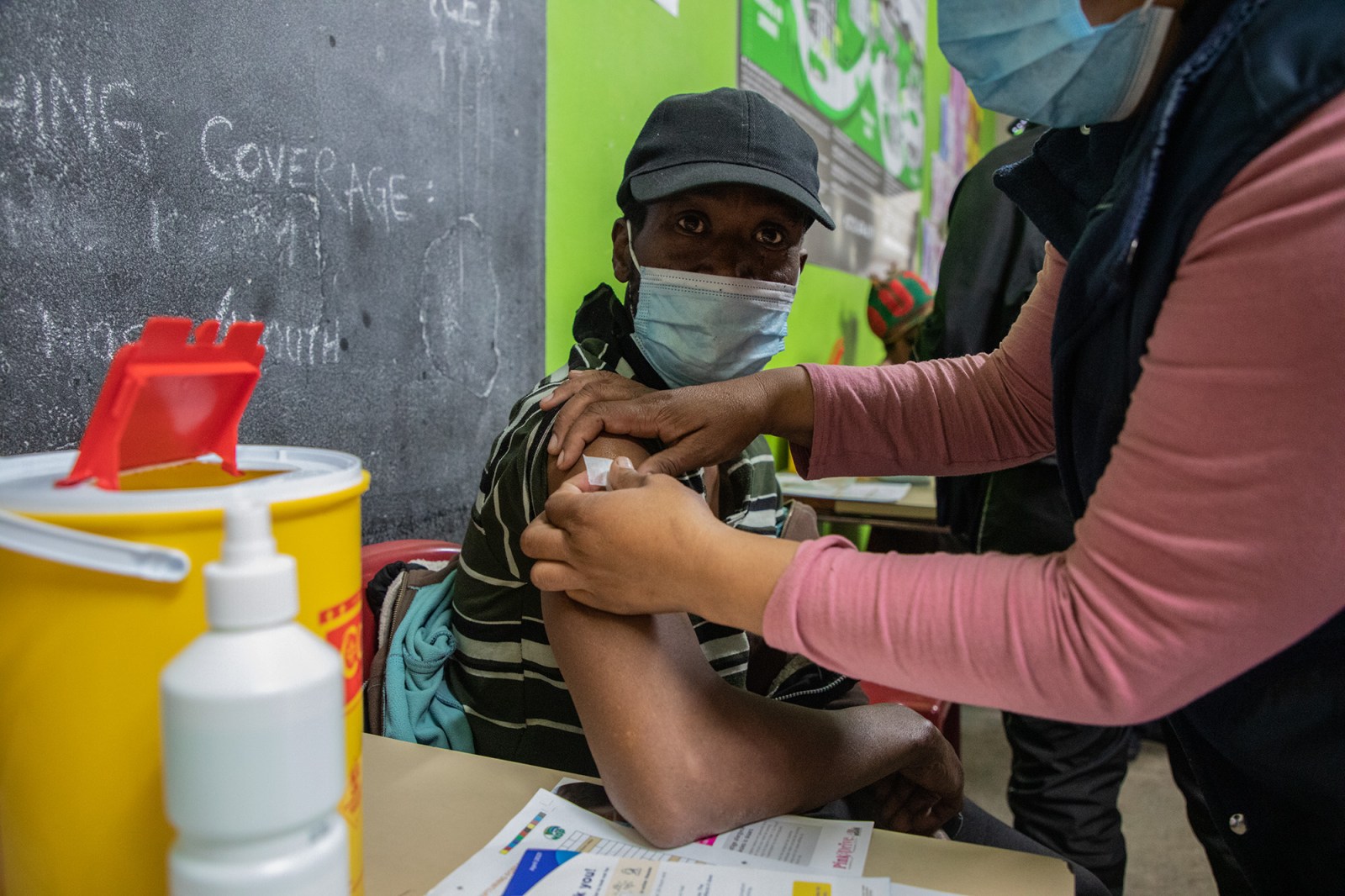 Gift John receives his Covid-19 vaccine at the U-turn Homeless Service Centre in Claremont, Cape Town on Friday, 10 September. Gift was one of a number of homeless people vaccinated on Friday, as part of a move by the Western Cape Department of Health in partnership with NGOs to vaccinate about 14,000 homeless people across the province. (Photo: Victoria O’Regan)

A drive to vaccinate the homeless in Claremont was almost derailed when a small group of anti-vaxxers showed up and began spewing conspiracies and profanities. Vaccine hesitancy is still rife amongst street dwellers who are often vulnerable to severe illness from Covid-19.

“Don’t take the jab! They’re trying to kill you!” screamed Ayesha Janodien at homeless persons queued at the U-Turn Service Centre in Claremont to get vaccinated on Friday morning.

The frantic anti-vaxxer was accompanied by a young child, a woman and two other men who identified themselves as part of a group called the ‘Freedom Fighters’.

When Janodien tried to make her way onto the premises, the staff ushered everyone inside and locked the gates. Police were called and the group drove off before they arrived.

One healthcare worker, who did not want to be named, said this wasn’t the first time an anti-vaxxer had tried to derail a vaccination drive. She lamented that the homeless were already vulnerable to infection and refusing the vaccine was a death sentence.

Fear and confusion are already rife amongst the homeless community who are concerned that getting vaccinated will result in severe side-effects or death.

City of Cape Town’s Homeless Agency Committee chair Ncumisa Mahangu told Spotlight in July that about 20% of people who are homeless and, in the shelters, and sites that the City supports were refusing to be vaccinated. The majority were women, many of whom believed the vaccine would make them infertile.

The U-Turn site had 150 of the single-dose Johnson & Johnson vaccines in stock. By 11:30 when the queue was basically empty, approximately 50 jabs had been administered.

According to Jon Hopkins, U-Turn’s head of operations, the pop-up vaccination site at the NGO’s Claremont facility was a joint venture with the Western Cape Department of Health, the Hope Exchange and the Strandfontein Homeless Action Committee, an activist organisation lobbying for homeless person’s rights.

“We have an outreach team to encourage people to come in,” he told Daily Maverick. Flyers, Whatsapp messages and word of mouth were other communication channels used to spread the word. The organisers were concerned that alerting too much of the media would attract anti-vaxxers —  unfortunately, they caught wind.

By around 10am, when the doors opened, a sizeable queue had gathered outside the gates.

Waiting in the vaccination line, 46-year-old Bathini Mani who has lived on the streets of Claremont for two years said he was getting vaccinated because healthcare would be unaffordable if he fell ill with Covid-19.

“I’m getting this injection so that I know my body is strong and I can fight the coronavirus.”

Mani who recently had his ID stolen, was also encouraged by the fact that he didn’t need a document to get vaccinated.

Hopkins noted that apart from the myths street dwellers had heard about the vaccine, lack of documentation was also a cause for vaccine hesitancy.

Vaccination without ID numbers, he explained, was only happening in the Western Cape, based on information he had received through the National Homeless Network.

Yvette Andrews, the clinical programme coordinator for Community Based Services said that if clients did not know their ID number, an identifying feature such as their date of birth was captured and would later be uploaded onto the EVDS for data purposes.

Beryl Swets, 56, said she didn’t trust the vaccine but was getting the jab anyway because she believed the government was going to force citizens to get inoculated.

“I know someone who had been vaccinated but died of Covid. I’m worried I’m still going to get it even after getting the vaccine,” she said.

The majority of people who showed up for the jab were homeless, however, the walk-in vaccination site was open to the eligible public.

Andrews felt that targeting certain groups such as sex workers or the homeless community was discriminatory.

This is the third vaccination opportunity of its kind coordinated in the province. On Thursday this week, a vaccination drive was held at the Sea Point Methodist Church. Last month the Hope Exchange on Roeland street kicked off vaccinations for Cape Town’s homeless.

A waiting area was set up at the back of the venue where vaccinees were monitored post-inoculation and could enjoy a meal.

Ashley Charles, 29, who lives at a shelter in Observatory is a Covid survivor. Despite being nervous to receive the vaccine, he was surprised by how quick and relatively painless the process was.

“I don’t like needles, but now that I have it I’m relieved,” he laughed.

Along with the mandatory vaccine card, vaccinees were given an information pamphlet and paracetamol to manage any pain as a result of the jab.

Another vaccine drive is planned for Monday at the station deck taxi rank in the CBD. DM