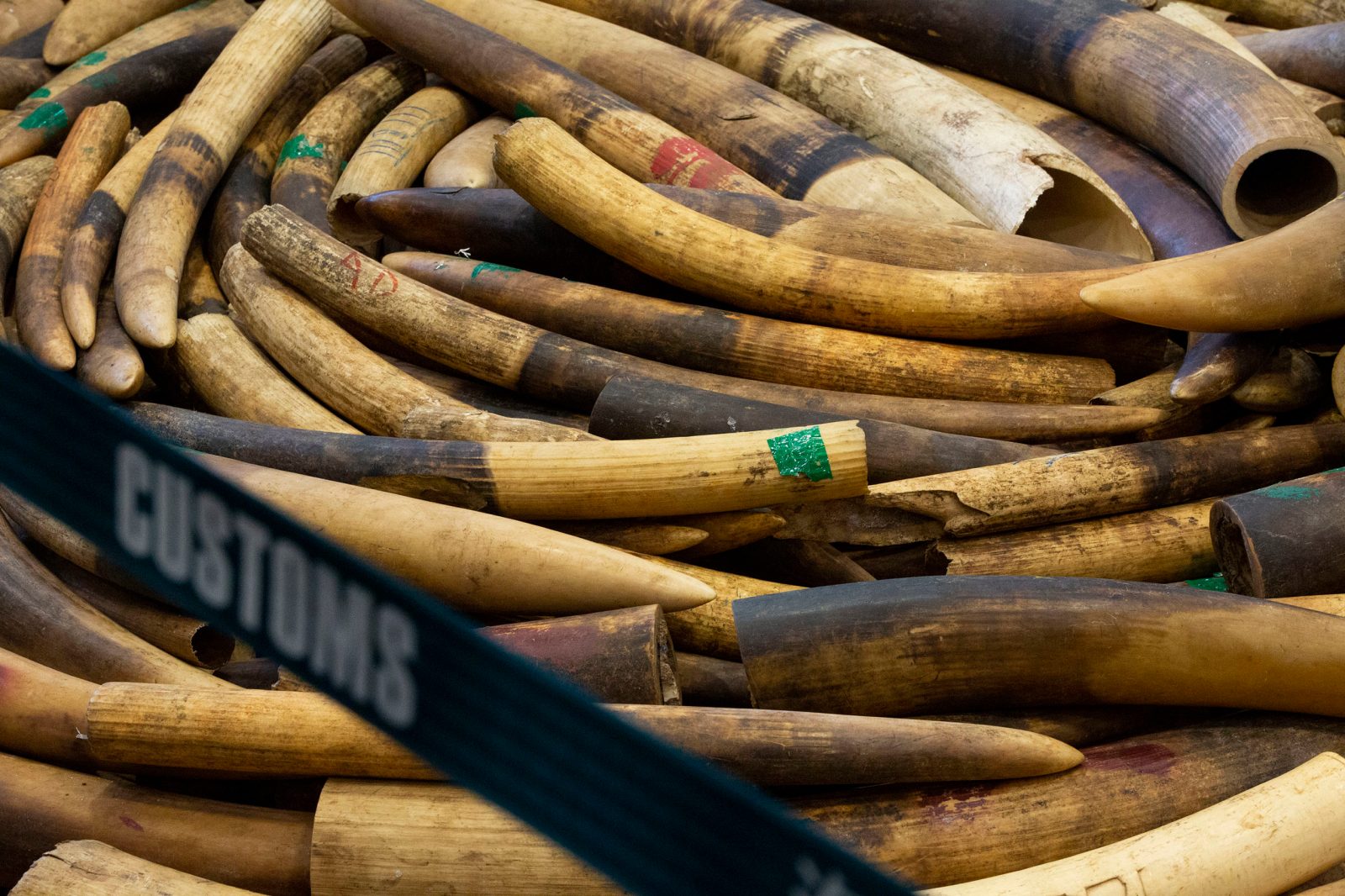 Recent analysis from the Global Initiative Against Transnational Organized Crime has found that reported prices for illegal ivory rose in 2020 — the first increase since the peak of global ivory prices in 2014. Rising prices, along with the disruption to ivory supplies caused by the pandemic, may be a warning sign of increased illicit ivory trade in future, and a threat to the successes in countering elephant poaching in East and southern Africa.

When researching the illegal ivory trade, there are a few key metrics to look at. First among these are measures of illegal elephant killings, which can shed light on where the main supply sources of illegal ivory are, and how much ivory is entering illegal trade through poaching channels. In 2019, elephant poaching rates hit their lowest level since 2003 (which is when systematic records began via the Monitoring the Illegal Killing of Elephants [MIKE] programme).

Analysis of the number and weight of ivory seizures can also give information about the main supply sources and consumer demand hotspots. Seizures in transit countries can also offer valuable information on the transport routes through which illegal ivory moves. For example, analysis by monitoring organisation Center for Advanced Defense Studies (C4Ads) suggests that global seizures of ivory, rhino horn and pangolin scales fell sharply in 2020. Conservation organisations have warned that this may foreshadow an impending “illicit-trade boom”, whereby stockpiled wildlife products that could not be moved under Covid-19 restrictions are released and hit the market, while the economic impacts of the pandemic on wildlife source countries manifest in increased poaching.

The use of ivory price data can also provide another window into the dynamics of illicit trade. New Global Initiative Against Transnational Organized Crime (Gi-Toc) analysis has looked at trends in black-market ivory prices since the beginning of the century to investigate what price trends may portend for illicit ivory trade in East and southern Africa.

Price data, when compared over time, provides an insight into levels of demand for (and supply of) illegal wildlife products and can help predict future trends in poaching and illegal trade. This is a different insight into the illegal trade than other measures such as poaching incidents and seizures. Poaching incidents are not the only means by which ivory may enter illegal trade (for example, thefts from legal ivory stockpiles can feed the illicit market) and seizures only capture a small proportion of the illicit ivory on the market, and so may not reflect actual illegal trade trends. Price data, by contrast, reflects the assessment of supply and demand by actors within the illicit trade itself.

This is especially true for prices at early stages of the illegal wildlife market, such as prices charged by poachers and exporters in source countries. Data for a “raw” product such as ivory is also more likely to reflect direct demand and supply factors than prices for processed wildlife products such as worked ivory. For worked products, other variables may influence price, including quality, the unknown quantity of wildlife material within the worked product (as in medicinal products), location sold (street or online price is much lower for the identical product than in a luxury boutique or auction house) and purchasing power of the buyer.

However, collecting price data for illicit products such as ivory is difficult to do accurately because of the covert nature of the market and the supply chains that feed it. There is little opportunity for researchers to check or cross-reference price estimates from different sources in the illicit market, and the factors causing prices to vary across time and geographies may not be visible to the outside observer. Another issue in tracking ivory prices over time is that often prices are reported in research in US dollars, meaning that fluctuating exchange rates may distort actual reported prices. As our research into drug pricing has also found, difficulties in measuring illicit commodity prices become an issue when these estimates are used in court proceedings and sentencing, which is the case in some countries in East and southern Africa, including Tanzania, in wildlife trafficking cases.

Our analysis brought together price data reported from sources active in the illicit ivory trade — such as poachers and ivory traders — and price data recorded in other analyses, academic papers and reports, from 2000 to the present. The key finding was that after precipitous declines in raw ivory prices from late 2014, there was a surprising resurgence in wholesale ivory prices in 2020. This included a rise in the ivory wholesale price in China, from about $750/kilogramme in early 2017 to almost double that in late 2020. A less drastic price rise was also observed in Vietnam, with the price of ivory hitting $689/kg in 2020 compared with an average of $629/kg in 2018. Prices reported by poachers in Kenya also showed a slight increase in prices from 2018.

These recent price rises should be watched closely and confirmed by further investigations. Why this is occurring is not immediately clear, although it may be because imports to destination and transit countries were restricted in 2020 because of the decrease in air travel during Covid-19 lockdown periods, which reduced supply.

The price rises in Asia could be a result of the resale of old stockpiled ivory, which would sell at a higher price than newly acquired ivory because the tusks were purchased when prices were higher. Alternatively, the Asian wholesale price increases in 2020 may be the consequence of ivory trafficking networks moving to West and Central Africa, where research suggests poacher and middleman supply prices are much higher than in East and southern Africa.

But prices then crashed, probably beginning in late 2014, to reach an average of $960/kg in 2015. In 2018, after China had closed the legal ivory market, prices hovered in the $1,000/kg range, according to a Chinese source, but in 2019 wildlife trade monitors Traffic China found that raw ivory importer selling prices were down to an average of about $570 per kilogramme. Prices in China are complicated by the fact that they are much higher in the north (Beijing) than in the south (Guangdong Province).

Recent studies have suggested that, in the aftermath of the global financial crisis, ivory prices rose as the commodity became sought after as an investment, much like other high-value commodities such as gold. As record gold prices in 2020 have again shown, these kinds of commodities rise in price amid financial uncertainty and crisis. In 2014, as ivory became less of an attractive investment option, prices once again began to fall. The same thing could happen with ivory prices during the post-Covid economic recovery, although it is too soon to ascertain any such trajectory.

What does the post-Covid world hold for elephants in East and southern Africa?

Countering ivory trafficking in East and southern Africa can be seen as a success story, as there has been a large-scale shift in illicit ivory sources from the region towards West and central Africa. Major ivory trafficking organisations have also been dismantled. For example, major traffickers Feisal Mohammed Ali, Yang ‘Ivory Queen’ Fenglan, Boniface ‘Shetani’ Malyango, Mateso ‘Chupi’ Kasian, several members of the Shuidong network, the Sheikhs gang, and the principal leaders of the Kromah network were all arrested between 2014 and 2020.

Domestic legal ivory markets in destination countries have been closed and civil society has had some success in changing consumer attitudes towards consuming ivory products.

However, the latest trends in ivory prices mean that there is a risk these successful trends may change. The recent rises in ivory wholesale price, if sustained, may spur increased levels of poaching in future. With large potential profits to be made, criminal networks that have been dismantled by law enforcement may become active again if prosecutions are unsuccessful or associates are not prosecuted, and new ones may emerge.

Despite progress, the demand for illicit ivory is still there, and so the threat to elephants in East and southern Africa — which hosts the largest populations of elephants in absolute numbers — remains. DM

The Global Initiative is a network of more than 500 experts on organised crime drawn from law enforcement, academia, conservation, technology, media, the private sector and development agencies. It publishes research and analysis on emerging criminal threats and works to develop innovative strategies to counter organised crime globally. To receive monthly Risk Bulletin updates, please sign up here. This article also draws on research from the Gi-Toc brief ‘African elephant ivory’, by Daniel Stiles, the first in a series that examines market dynamics and prices of selected live and derivative products in illegal wildlife trade. Available at: https://globalinitiative.net analysis african-elephant-ivory/.