R3.3bn spent on infrastructure improvements, yet water remains a scarce resource for residents of Giyani 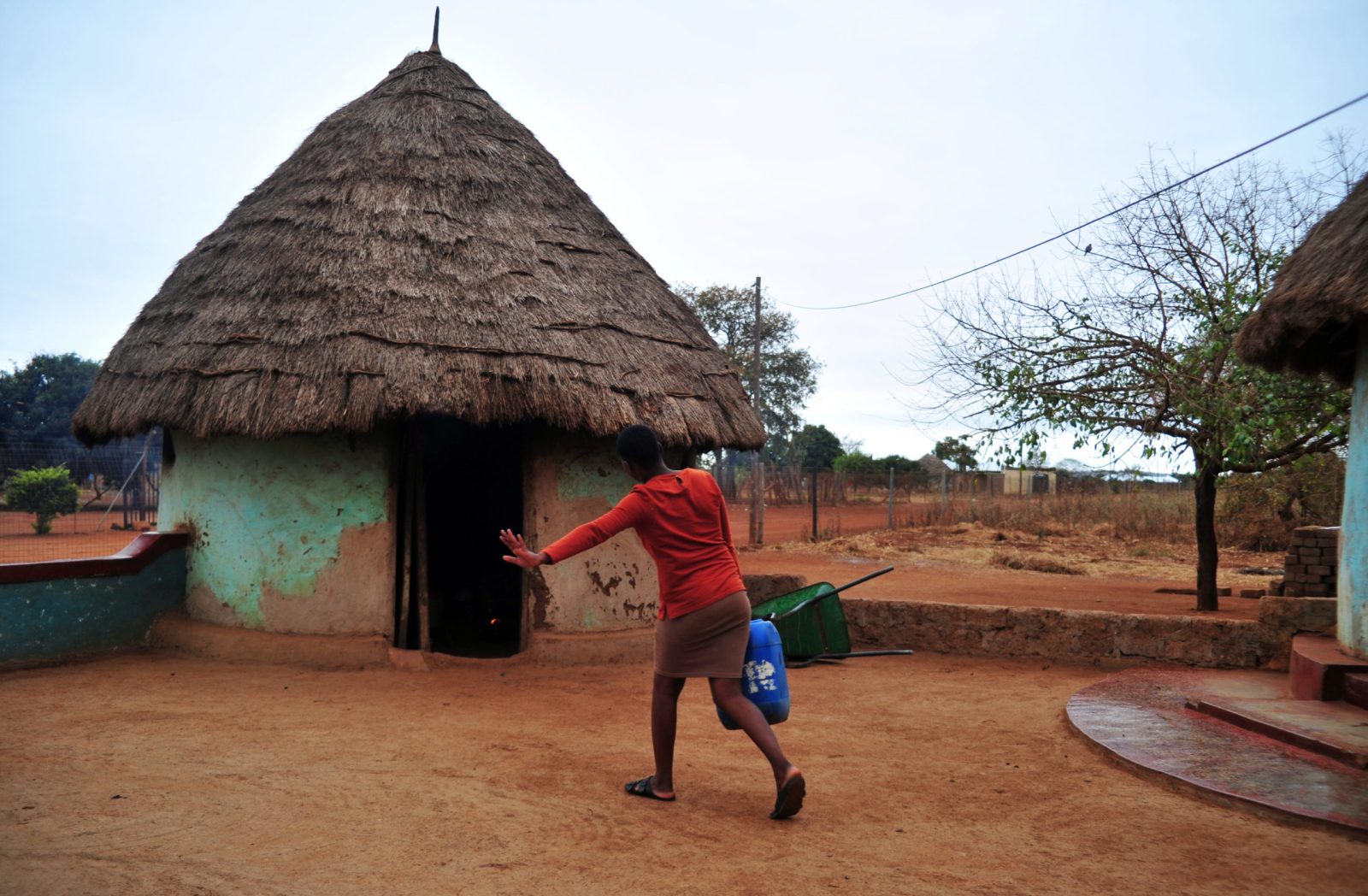 Voni Mavunda carries a 25-litre container of water to her grandmother, who is cooking the family meal on a floor fire in the kitchen of their home in Khakhala village. (Photo: Lucas Ledwaba / Mukurukuru Media)

Greater Giyani Local Municipality has been enduring chronic water shortages, stemming from a multi-billion rand waterworks project in the area that, after seven years, is not even halfway complete. Residents face a lengthy wait, as the water authority is requesting a further R1.1-billion to complete the project.

On those few days when the taps are running in Khakhala village, Singobile Tshabalala makes several trips pushing a wheelbarrow to collect water from a communal water tap about 500m from her home.

“It is tiring. I have to cook and wash for my family. At the end of the day my hands are tired, my body is tired,” says Tshabalala preparing to load two 25-litre containers onto a wheelbarrow on an overcast day.

Earlier that morning, 20km away in Giyani, Minister of Water and Sanitation Senzo Mchunu held an imbizo with councillors, community representatives and other stakeholders to discuss the water problems afflicting villages like Khakhala.

The village, which falls under the Greater Giyani municipality is among 55 settlements experiencing chronic water shortages.

Lepelle Northern Water, the water authority servicing the area, has spent R3.3-billion in the past seven years on a water project that still remains incomplete.

Residents like Tshabalala didn’t know about Mchunu’s engagement with stakeholders that day.

Instead, they were involved in the daily struggle to access water. Residents of Khakhana, which is located just 11km from the Nsami dam and a waterworks treatment depot meant to supply them with water, say they sometimes go for two weeks at a time without direct access to a water supply.

The communal taps that served their villages prior to the R3.3-billion water project debacle have long since dried up. The Greater Giyani municipality has installed communal water tanks in some areas, some of which draw water from boreholes. However, residents say these don’t always work.

“It has been a long time that we have had water. We are told some of the pipes are broken and some blocked. We are suffering. We cannot even plant vegetables because there is no water,” says Olga Mthombeni, also of Khakhala.

On the few days that water flows from the taps, residents spend hours filling up dozens of containers in anticipation of another long wait.

Mchunu said the department will go after those implicated in the misspending of funds meant to bring water to the villages.

“Every cent of this R3.3-billion will be fully accounted for,” he said.

But community representatives at the imbizo expressed deep frustrations.

“Minister Mchunu, come with magic, come with something to bring about change,” he said, highlighting that more than three ministers had thus far failed to resolve the issue.

“Councillors are given a hard time in communities because we are unable to provide water,” said Penny Penny, real name Gezani Nkovani.

Community representatives revealed that some of the problems in their villages ranged from damaged infrastructure, dysfunctional community boreholes and illegal connections, to councillors encouraging illegal connections in return for promises of support at the polls.

Mchunu did not want to say whether there was a possibility the cost of the project could escalate beyond the R3.3-billion already spent.

Mchunu said the project was initially undertaken without a budget and proper scoping, which saw the costs escalating to R3.3-billion. He said Lepelle Water has indicated the project is now at 48% completion and would eventually cost R4.1-billion.

“It should not have taken us this long [to complete the project],” he said, citing a lack of accountability for the chaos.

“Lepelle [Water], look at yourself, your armpits are smelling and we are beginning to smell like you,” Mchunu said in isiZulu during the meeting with stakeholders.

He said the municipality has met with the SIU which has provided assurances it will provide all the necessary information and assist in fast-tracking their investigations “because we want all those involved to be dealt with. It cannot be correct that we allow people to do as they please with public money and face no consequences for their misdeeds.”

Meanwhile, as the gears of bureaucracy grind slowly, residents like Mthombeni continue to struggle.

“Maybe the solution is that we should have tanks in every yard. I don’t know. But we are tired,” she said. DM/MC

R3.3bn spent on infrastructure improvements, yet water remains a scarce resource for residents of Giyani