Putin bashes US over Afghanistan at BRICS summit 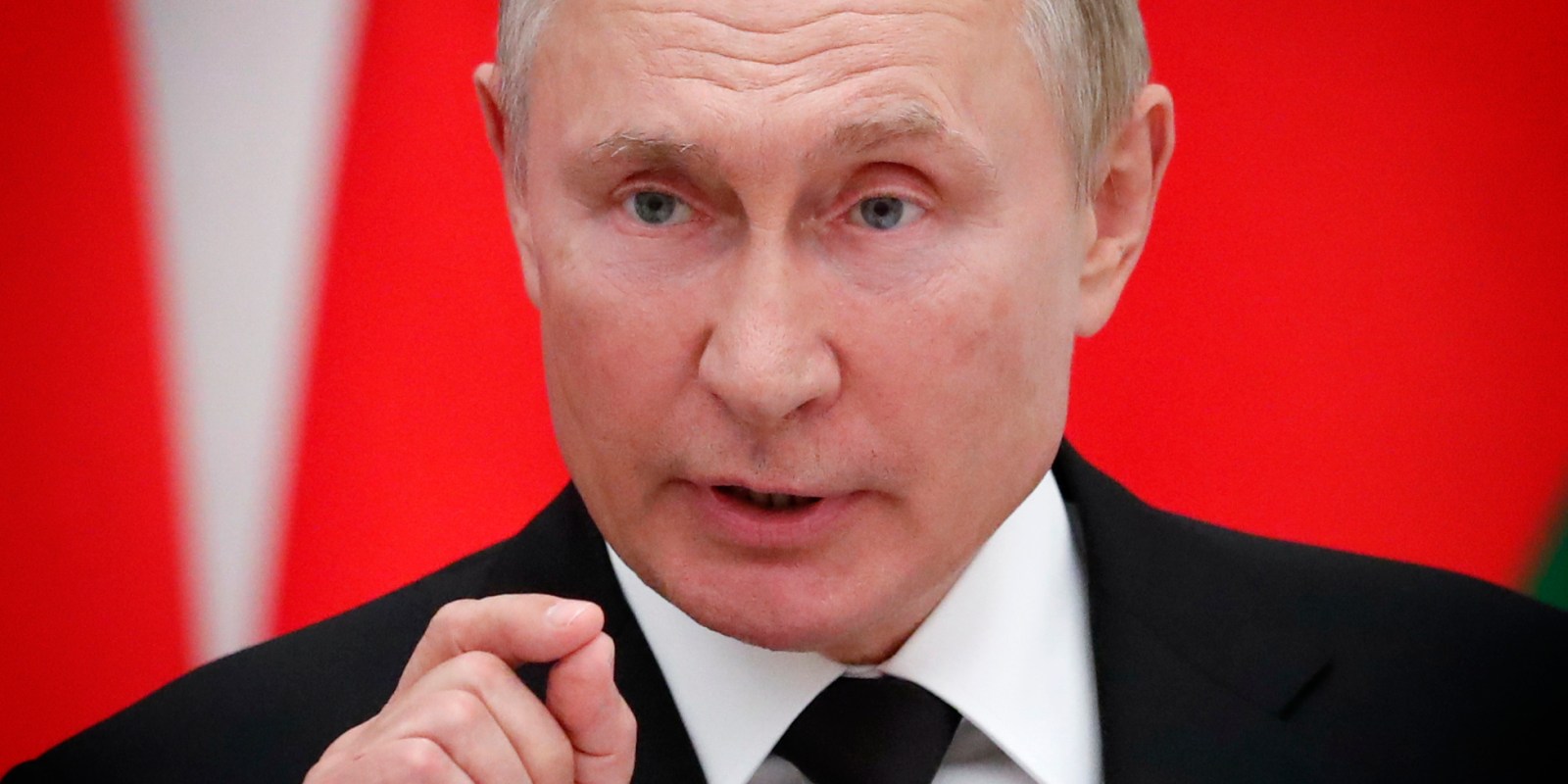 Russian president’s remarks were a stronger version of the summit communique, which called for an inclusive intra-Afghan dialogue… to ensure stability, civil peace, law and order in the country.

Russian President Vladimir Putin used the platform of the 13th BRICS summit on Thursday to bash the US and its allies over their chaotic withdrawal from Afghanistan, which he said had created a “mess which the entire international community will have to clear up”.

Addressing the opening of the virtual summit, Putin laid the blame for the chaos and instability in Afghanistan entirely on the “social and political engineering” by the US and its allies to try to create a democratic state reflecting their own values instead of allowing the Afghans to choose their own political system.

Ramaphosa used his brief speaking turn at the start of the summit to punt once again for his favourite international project — a waiver, for Covid vaccine manufacture, of the Trade Related Intellectual Property Rights (Trips) agreement at the World Trade Organization (WTO). This would allow countries such as South Africa and India to manufacture Covid vaccines developed by international pharmaceutical companies without their permission and without paying them.

However, Ramaphosa’s pitch seemed to fail, as the communique from the summit, while noting “the glaring inequity in access to vaccines, diagnostics and therapeutics, especially for the world’s poorest and most vulnerable populations”, did not unequivocally back a Trips waiver.

Instead, it merely “noted” the ongoing discussions at the WTO about the waiver.

The communique did, however, note the intra-BRICS cooperation to strengthen preparedness and response to the pandemic, including in vaccine cooperation, and welcomed the progress towards the early launch of the proposed BRICS Vaccine Research and Development Centre in a virtual format. The leaders mentioned progress towards establishing a BRICS Integrated Early Warning System for preventing mass infectious diseases risks.

The summit also made progress towards an agreement on expanding the members of the BRICS New Development Bank to include non-BRICS members, officials said. South Africa has been the main champion of expanding membership, particularly so other African countries could borrow from the bank, which has, for example, lent $2-billion to each of the BRICS member states to fight the pandemic as well as many other loans for infrastructure.

Officials said that the idea on the table was for two new members to be admitted from each of the regions of the BRICS members. Some new members had already been agreed on, but the BRICS leaders had decided to wait until all had been agreed before announcing any.

This summit communique said the action plan would make “a meaningful contribution to the global efforts of preventing and combating the threat of terrorism including on countering radicalisation, terrorism, the misuse of the internet for terrorist purposes, the travel of terrorists, and enhance measures for the protection of soft targets, intelligence sharing, and capacity building”.

The five leaders committed at the summit to combating “terrorism in all its forms and manifestations, including the cross-border movement of terrorists, and terrorism financing networks and safe havens”.

The leaders also called for “an expeditious finalisation and adoption of the Comprehensive Convention on International Terrorism within the UN framework”. This convention has been on the negotiating table for many years, but nations cannot agree on what should be defined as terrorism and what instead is a legitimate liberation struggle.

As it does at every summit, BRICS demanded reforms of the principal organs of the United Nations, including making the Security Council more representative of developing countries. But also, as it does at every summit, BRICS, as a collective, did not explicitly support the quests of South Africa, India and Brazil for permanent seats on the Security Council. The two other BRICS members, Russia and China, which already have permanent seats on the Security Council, merely “reiterate[d] the importance they attach to the status and role of Brazil, India and South Africa in international affairs and supported their aspiration to play a greater role in the UN”.

Though South Africa is probably the most enthusiastic member of BRICS, it scored last of the five in a ranking by the University of Toronto-based BRICS Research Group, (BRG) which assessed that Pretoria had complied with only 62% of 17 selected commitments it had made at the last BRICS summit last year — compared to India, which scored 82%, Russia with 74% and China and Brazil with 71% each.

The BRG, which monitors compliance with commitments at all BRICS summits, said in a statement that it and Russia’s Center for International Institutions Research had calculated that on average the five BRICS countries had achieved 72% compliance with selected commitments made at the last summit of 17 November 2020 hosted by Russia.

The group said it had measured compliance with 17 key commitments which it had selected from the 45 overall commitments at the last summit.

The BRICS countries achieved 100% compliance on six commitments, including one to help one another and other countries access Covid-19 vaccines.

At the opening of this year’s summit, Modi underscored the counter-terrorism plan and cooperation in fighting Covid, Xi focused on the contribution BRICS had made to global governance, while Bolsonaro, the most nationalist and least multilateral of the five leaders, talked almost exclusively about the good bilateral relations Brazil had with each of the other four member nations. And Putin used his brief few minutes in the public limelight to thrash the US and the West about Afghanistan.

“The US and its allies’ withdrawal from Afghanistan has led to a new crisis and it’s still unclear how this will affect regional and global security.

“The citizens of this country have fought for decades and deserve the right of defining what their state will look like on their own,” Putin said, though not mentioning that the Soviet Union had occupied Afghanistan from 1979 to 1989. Others had an interest in Afghanistan ceasing to be a threat to its neighbours and a source of drug trafficking, terrorism and migration flows, Putin said.

The crisis in Afghanistan “stems directly from irresponsible attempts to impose their values from the outside and their intention to build a so-called democracy, democratic structures, using the patterns and methods of social and political engineering without taking into account historic features and disregarding the traditions that others have followed”.

And when these “experiments” failed, the authors withdrew, leaving the Afghans to their own devices and leaving the entire international community “to clear up the mess”.

Putin said the only way of ensuring progressive governance of international relations was by “guaranteeing the coexistence of states with different social and political systems, their own national interests, cultural and moral values”.

Everyone should “strictly observe the fundamental principles of international law enshrined in the UN Charter, including non-interference in internal affairs and respect for sovereignty”.

His remarks were a stronger version of the summit communique which called for an “inclusive intra-Afghan dialogue… to ensure stability, civil peace, law and order in the country.

“We underscore the priority of fighting terrorism, including preventing attempts by terrorist organisations to use Afghan territory as a terrorist sanctuary and to carry out attacks against other countries, as well as drug trade within Afghanistan.”

“He seems to be forgetting about Crimea,” an official of one of the other BRICS countries remarked dryly, referring to Russia’s annexation of that territory from Ukraine in 2014. DM