Wide open spaces: Eastern Cape landowners near the Lesotho border stand to benefit if plans for a new national park are realised 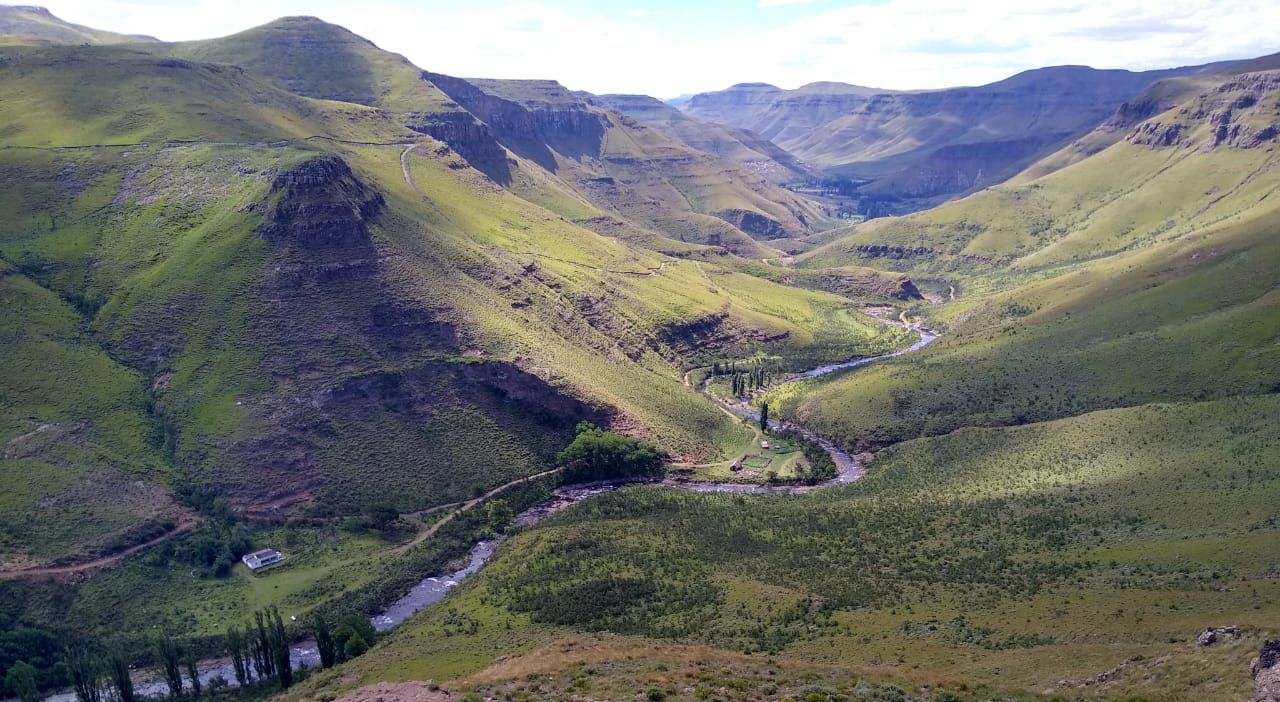 The beautiful view of the mountains and river in the Eastern Cape near the Lesotho border earmarked for a national park. (Photo: Nick Helme)

South African National Parks (SANParks) is working on establishing a high-altitude national park in the mountains of the Eastern Cape close to the Lesotho border and the spectacular Naude’s Nek pass.

If all goes according to plan, the Eastern Cape will be home to a new  30,000-hectare national park in the next five years.

The proposed national park, a collaboration between SANParks and the World Wide Fund for Nature (WWF), will become South Africa’s newest national park and contribute significantly towards the conservation of grasslands and water security.

To establish the park, SANParks and the WWF will be looking to sign voluntary agreements with private and communal landowners using the biodiversity stewardship approach. This means the landowners will continue to own the land that will fall under the park, and they will get assistance in co-managing the area. If they decide to sell the land, it will be to SANParks at market value.

Funding for the long-term implementation of the park will be provided through the Department of Forestry, Fisheries and Environment, with income generated by SANParks through tourism, as well as some innovative conservation finance mechanisms that are being piloted, such as carbon payments.

The process is still in the planning and stakeholder engagement stage. So far, potential private and communal land for inclusion into the project has been identified through desktop assessment. Over the next two years, engagements with private landowners and chiefs will be held and data such as the number of villages, what the land is used for, its ownership status and valuation will be gathered. A biodiversity site assessment will be conducted before the park is officially declared.

“This is still at a sensitive stage. We have engaged farmers’ associations and Rhodes town residents, and we are still engaging Chief Montoeli Lehana of the Batlokoa Traditional Council and the community in Mount Fletcher,” she said.

The process was still in the foundation phase and it depended on the landowners to make it a success, she said.

“The creation of this new park will play a significant role in buffering communities from the impacts of climate change. Impacts of climate change are evident across all ecosystems and communities. Temperature increases of more than 1°C have been observed in the past 50 years, accompanied by the intensification of extreme events such as droughts, heavy rainfall, coastal storm surges, strong winds and wildfires. Healthy ecosystems can provide resilience against the worst effects,” said Maze.

Restoring the ecosystems in this area and maintaining them in good ecological condition meant they were better able to support natural adaptation and mitigation processes, offering increased protection to human communities and reducing the economic burden of climate disasters, she said.

“The ecosystem-based Adaptation (EbA) is the use of biodiversity and ecosystem services to support communities to adapt to life in a less predictable climate system. This involves an innovative approach that focuses on working with private and communal landowners in what will remain a working agricultural landscape,” she said.

She said the overall objective was to establish an “ecologically, economically and socially sustainable consolidated protected area within the region through an innovative combination of land inclusion mechanisms and development options”.

She said this new park is needed to:

“Investments in the management, restoration and rehabilitation of ecosystems and their services are investments in the communities who depend on them. Ecosystem-based adaptation efforts can lessen flooding, improve water and soil quality and contribute to livelihood opportunities. They deliver benefits for society and the environment at the same time, and are an important way of safeguarding development in the face of climate change,” Maze said.

She said the establishment of the new park had been supported by funds from the Green Trust, WWF-SA and the National Parks Trust of SA.

SANParks acting CEO, Dr Luthando Dziba said not only was the area rich in biodiversity and endemic species, it also lay within the Eastern Cape Drakensberg Strategic Water Source Area, a natural source of fresh water for people downstream.

“When declared, the park will also improve formal protection of South Africa’s grasslands which have been identified as a national conservation priority. The proposed NE Cape Grasslands National Park will take a somewhat different form to traditional parks,” he said.

Dziba said the landowners will have the opportunity to incorporate their land in the park on a voluntary basis.

“As such, they also stand to benefit from a range of financial incentives for private and communal land that is formally protected. The project aims to raise significant government funding for the restoration and maintenance of the landscape for water security, bringing much-needed employment opportunities to the area and, because of its rugged, unspoilt landscape, the area has rich potential for adventure and cultural tourism which could help to build a year-round tourism industry, further unlocking potential jobs,” he said.

He said the declaration of a national park would also be a motivation for the inclusion of the area into the adjacent Drakensberg World Heritage Site.

Dr Morné du Plessis, CEO of WWF South Africa, said: “The beauty of this model is that biodiversity conservation and ecological management will be done in partnership with those who live and work in this area — while allowing them to continue deriving benefits from their land through sustainable agriculture and other compatible land uses. Ultimately, this is a win-win — for nature and for people. We can’t wait to see this project coming to fruition.” DM/OBP

Wide open spaces: Eastern Cape landowners near the Lesotho border stand to benefit if plans for a new national park are realised