How South Africa is stacking up in the emerging market...

How South Africa is stacking up in the emerging market stakes 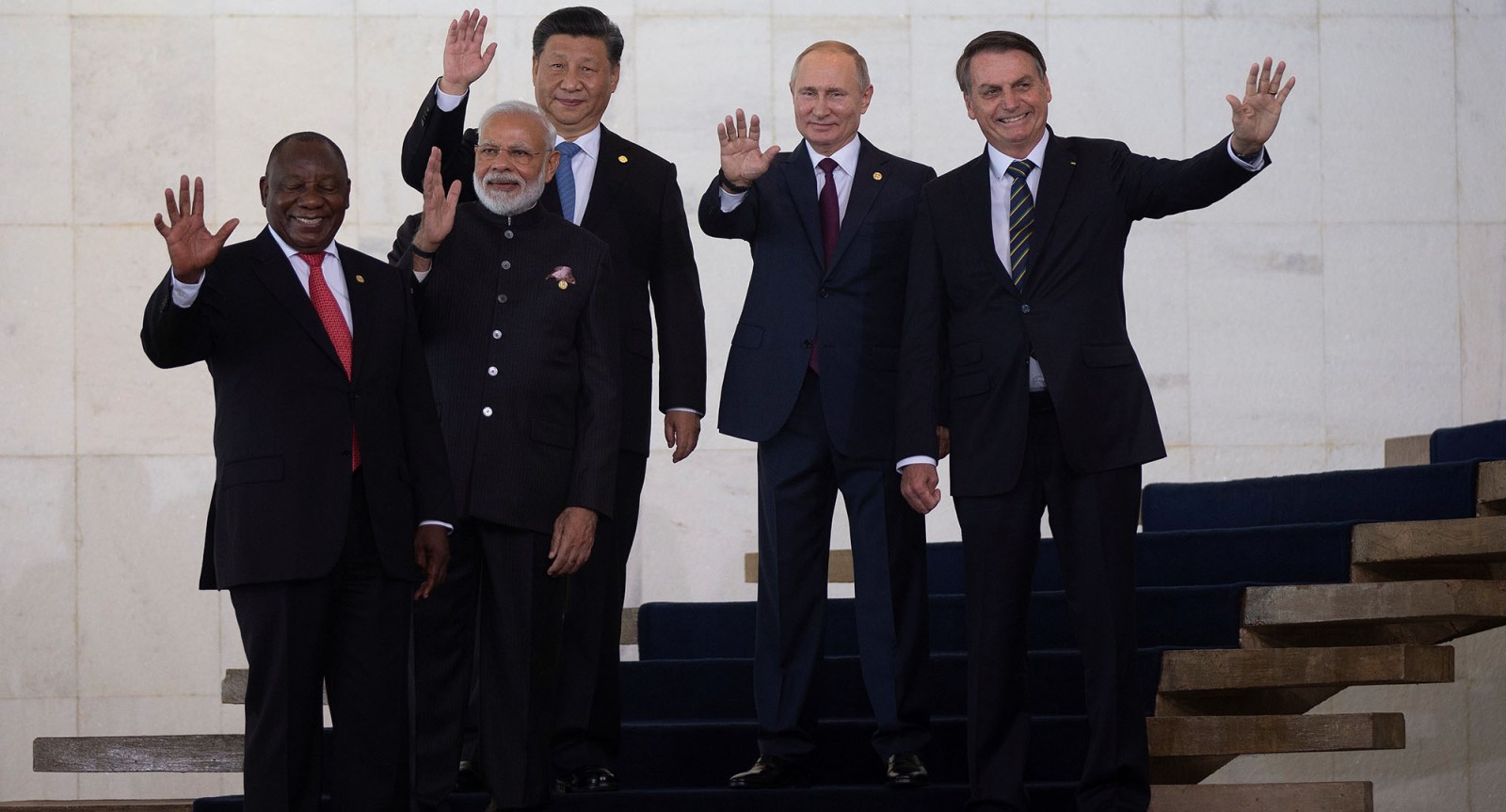 Investors are again paying more attention to emerging market opportunities as waning developed market economic momentum becomes a concern. Emerging market currencies, including the rand, have rallied as a result, but how is SA positioned to take advantage of this renewed interest, should it last?

The prospect of the turnaround in the US interest rate cycle possibly being delayed well into next year saw the dollar depreciate over the last week, allowing emerging market currencies to gain. The rand rallied particularly enthusiastically on this shift in the investment tide.

Added to the global events, South Africa’s growth in the second quarter came in slightly ahead of expectations and this saw the rand move towards the top of the emerging market currency leaderboard year to date, coming in at second position behind the Ukrainian hryvnia.

She adds: “The unexpected slowdown in US job creation over August also unsettled investors, heightening worries about the Delta variant’s rapid spread and casting doubts over the Fed’s plans to start tapering its large bond purchases by year-end.”

She expects global risk appetite to remain volatile in the face of further possible virus mutations, any evidence that inflation may prove more persistent than expected and shifts in developed market monetary policy stances.

“Given these opposing forces, the rand is likely to remain relatively resilient in the near term. We expect a mild depreciation during the rest of this year, followed by more significant weakness in 2022.” That will, of course, depend to a great degree on the trajectory of US interest rates.

As investors tentatively begin to look further afield than the US for yield-enhancing and reflation investment opportunities and emerging markets come into view, it’s worth considering how South Africa stacks up against its “competitor” emerging markets on a medium-term basis.

From a macroeconomic perspective, South Africa’s growth rate compares reasonably well with the other BRICS countries, namely Brazil, Russia, India, and China, but its precarious fiscal situation is a standout vulnerability and an ongoing black mark against the country’s attractiveness as an investment destination. It is, however, not experiencing the same inflationary pressures as Brazil and Russia.

Weimar spells out Nedbank’s assessment of the influences on the rand as of this week in the table below, with a risk-on attitude, weaker dollar, attractive interest rate differentials and an upswing in commodity prices all viewed as positive for the domestic currency. On the macro-economic front, only the current account is seen as a positive, while growth relative to the advanced countries and our fiscal policy are resounding negatives.

In their latest research note, “Investing in Emerging Markets”, UBS also expressed concerns about South Africa’s fiscal status and slow pace of structural change, but maintained its neutral view on the country. 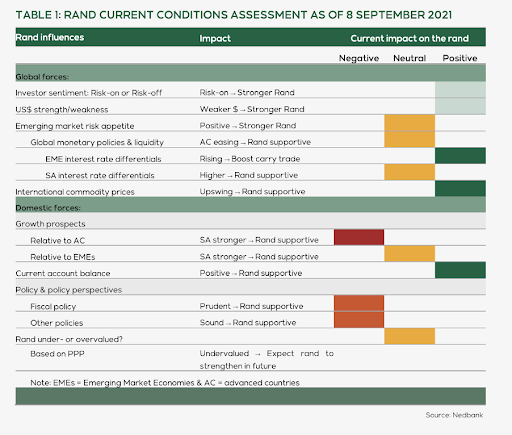 Nevertheless, should developed market interest rates start rising later than expected next year, emerging markets like South Africa could benefit substantially from demand for higher yields. Brazil and Russia’s yield spreads are also looking particularly favourable, because their central banks have been aggressively increasing interest rates over the past few months to bring inflation back in line with their targets. The graph below highlights how much Brazil, Russia, and, to a lesser extent, Mexico have increased their policy rates this year. 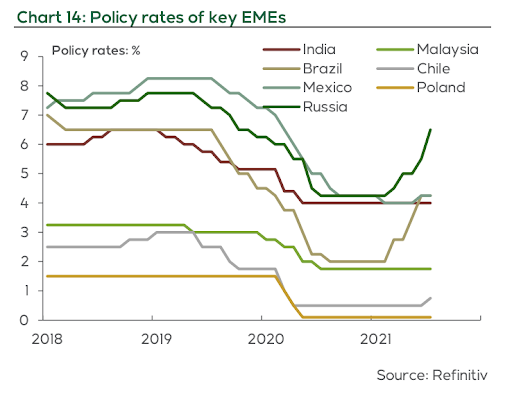 Emerging market equities are broadly also offering attractive value in the emerging market universe, with Ed Yardeni putting the emerging markets MSCI valuation multiple, as measured by the forward price-to-earnings (P/E) ratio, at a mere 12.8 times, which is a massive 40% discount on the S&P 500’s 22 times forward P/E. 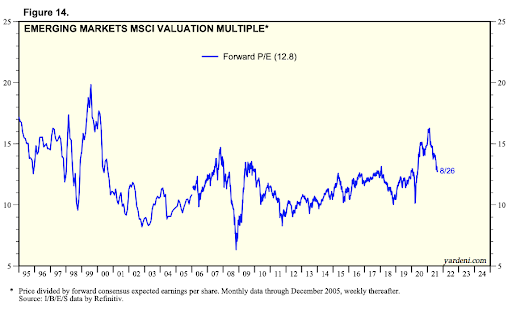 This discount has built up over the past decade during which emerging markets have substantially underperformed developed market equities, to the point where market commentators describe the period as a lost decade for emerging markets. 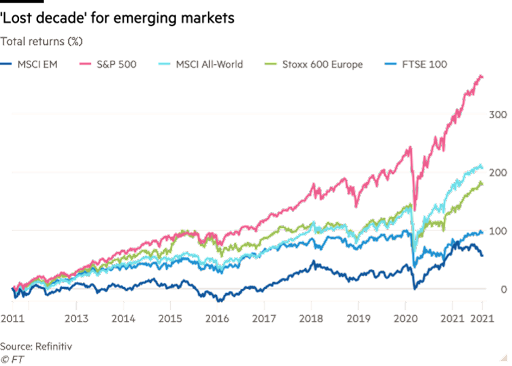 In early September, the MSCI EM Index gained renewed upward momentum, reflecting the recent shift in investor attitudes. Until then, it had put in an unremarkable performance for most of the year and had declined from mid-year. The relative performance of emerging markets within this universe has, however, been extremely diverse, with the top performer, Argentina, gaining more than 40% since the beginning of 2020, as shown in the graph below, and the bottom performer, Peru, losing almost 30%.

The South African equity market is sitting in the middle of the pack but is, encouragingly, running ahead of the overall MSCI EM Index. It has gained 7.4% since the beginning of 2020, compared with the index’s 2.6%. The other BRICS countries have put in wide-ranging performances. India has had standout equity market performance, gaining 27.1%, Russia is ahead 22.8% and Brazil (-3.6%) and China (-11.4%) are in negative territory. 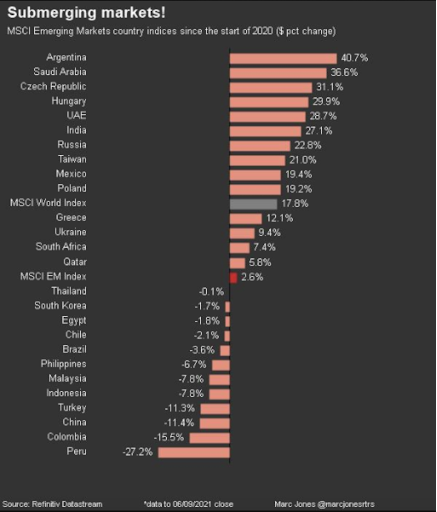 As always, the outlook for emerging markets can never be assured. UBS, which expects emerging-market assets to continue to have cyclical, valuation and yield appeal, notes that they will be vulnerable to changing expectations.

However, as long as the yield advantage continues, emerging market fixed interest assets stand a good chance of finding favour with global investors. It’s the stock markets and forex markets that will bear the brunt of the vagaries in investor interest. DM/BM