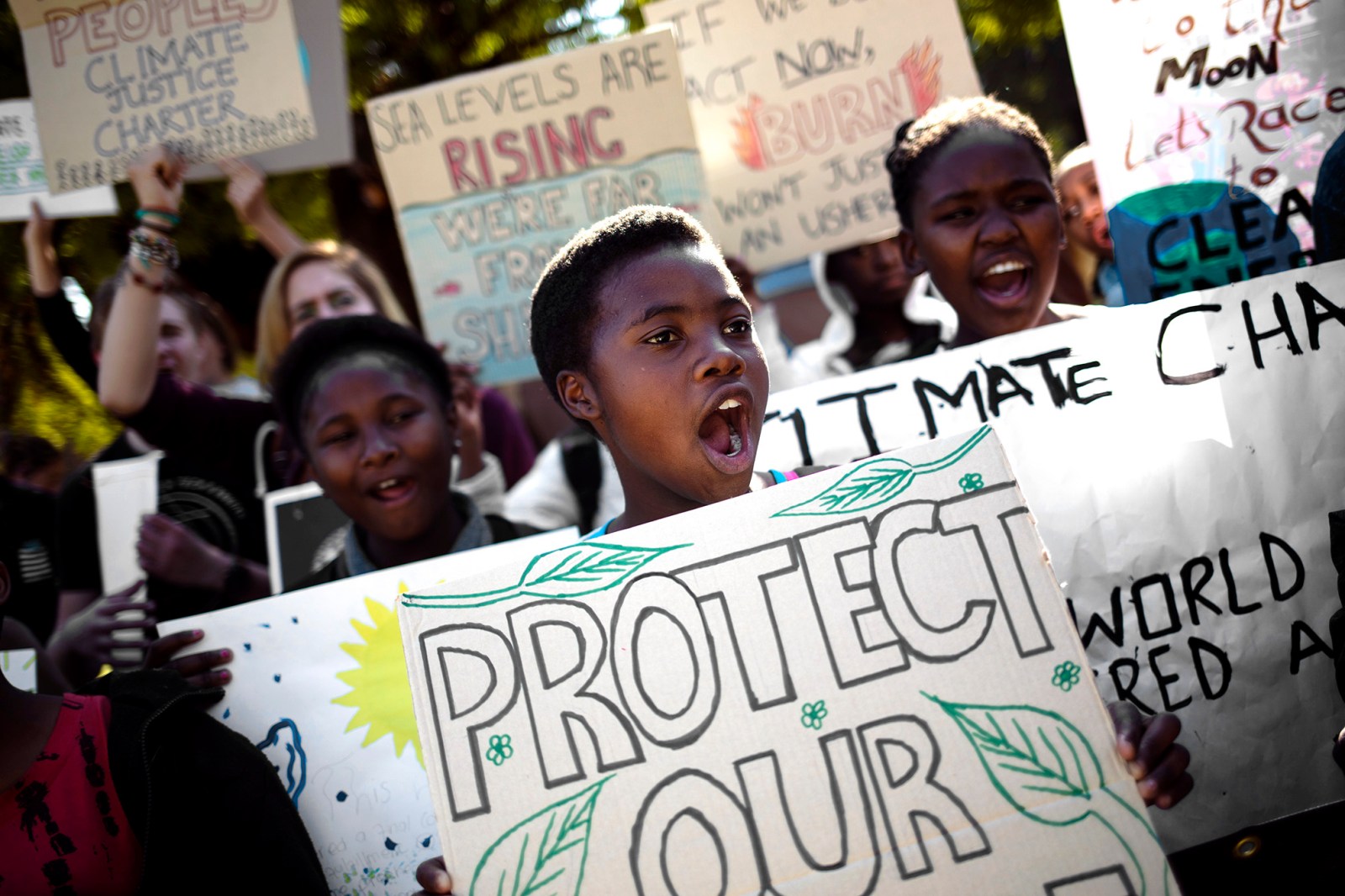 Schoolchildren take part in a protest outside the Union Buildings as part of the Youth Demand Climate Justice movement, in Pretoria, South Africa, on 14 June 2019. (Photo: EPA-EFE / KIM LUDBROOK)

A report commissioned by the Cape Town-based Centre for Environmental Rights has found that climate change adversely affects mental health – and it will only get worse for future generations. The report also finds that the climate crisis disproportionately affects marginalised communities and disadvantaged groups, including women.

The Centre for Environmental Rights launched a report on Tuesday titled “The psychological and mental health consequences of climate change in South Africa”.

Presenting the report, clinical psychologist Dr Garret Barnwell said that climate change poses a severe threat to mental health and that people in South Africa were particularly vulnerable. He said the fact that government was not dealing with the impact of climate change was exacerbating its effect.

The report aims to highlight the less obvious impacts of the climate crisis on communities, especially young people living in mining areas, and focuses on the decision by government to develop new coal mining capacity.

Barnwell explained that climate change “isn’t just a once-off event” and that it causes a cumulation of traumas and stressors which people experience directly and also vicariously through others, which leads to a range of psychological issues such as post-traumatic stress disorder, suicide and interpersonal conflict.

“These exposures lead to well-understood psychopathologies, including anxiety, depression, suicide, interpersonal violence, decreased work productivity and increased hospitalisation, amongst others,” says the report.

When it comes to having to deal with air pollution as a result of mining, communities experience a sense of intrusion and health-related anxiety and there have been recorded increases in violence and political exploitation in these communities.

Barnwell emphasised that how institutions respond to climate change is important. For example, is the threat to people acknowledged and action to mitigate against its negative impact taken or not?

He said children who come from families with poor housing conditions and inferior building materials are vulnerable to the impact of climate shocks and heat waves, and would feel the effects more acutely.

Barnwell said the report finds that children are more at risk because they are largely dependent on others for their survival and wellbeing. What threatens young people is adults failing to take action while patronising their voices, said Barnwell.

The climate crisis has been found to impair children’s ability to function meaningfully at school. It disrupts their sleep and increases their tendency to worry and experience anxiety as it takes away the prospects of a positive future, adding that they went through “a profound experience of loss”. There have, however, been instances where some have been channeling their stress into positive actions such as climate activism.

The report lists the adverse mental health experience from the climate crisis as chronic health problems, financial insecurity, depression and anxiety, substance abuse, education shortfalls and a sense of shame and hopelessness. Natural disasters such as severe storms and drought leading to water and food insecurity are likely to get worse, says the report, leading to communities feeling chronic psychological stress, social isolation, despair and marginalisation.

Speaking at the launch, Mbali Baduza, a legal researcher from SECTION27, said the incapacity of South Africa’s mental health system stemmed from the legacy of Apartheid, which created a divided and unequal healthcare system. This resulted in, among others, inequitable spending.

She said this manifests in the fact that the public health sector is burdened by historic underdevelopment and poor policy choices, while private healthcare is unaffordable and insufficiently regulated. Baduza pointed out that the climate crisis would thus disproportionately affect the marginalised.

Baduza pointed out that the Life Esidimeni tragedy was a clear example of how mental health and associated services have been “severely neglected”. She said it was difficult to ascertain whether the department of health would be able to meet its obligations over the next three years, when their budget tabled earlier this year showed it would be reducing spending by R50.3-billion.

Climate activist Gabriel Klaasen said, “What is actually going on is mental health injustice and it is deeply rooted.” Klaasen talked of there being a massive stigma among families of marginalised people when it came to mental health issues.

Klaasen said that when the youth spoke out against climate injustice, it was dismissed by adults – but added that he didn’t blame parents because “they too are victims of a broken system”.

“We are watching our future being ripped apart by the government.” DM/MC