Why nutritional intake for South Africa’s children is... 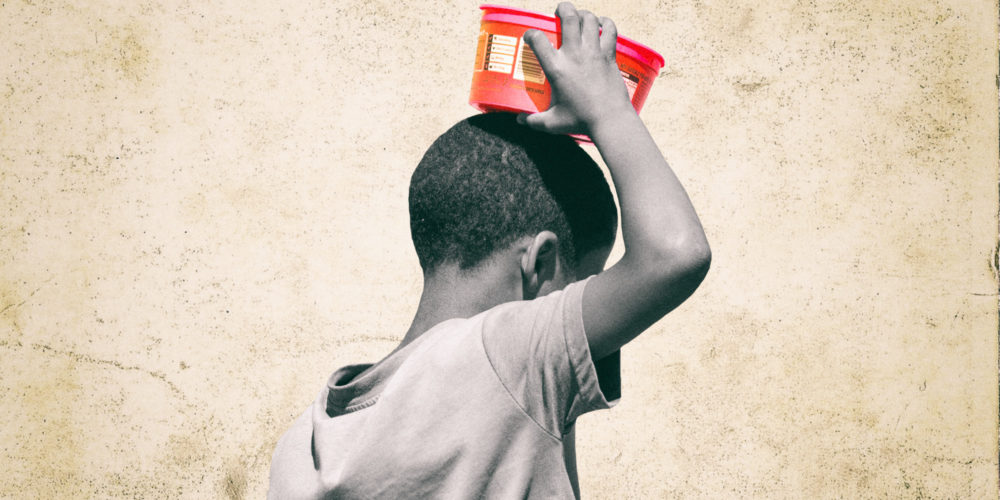 A child holds a plastic tub on his head to collect food from a feeding program in Lavender Hill on April 17, 2020 in Cape Town, South Africa. (Photo: Gallo Images/Brenton Geach)

Research has shown the importance of childhood nutrition in setting them up for healthy future practices. But what exactly does an adequate nutritional childhood diet look like and is it even accessible?

In 2018, a paper dubbed “A review of complementary feeding practices in South Africa” hoped to determine what foods or food groups are being consumed by infants and young children aged six to 23 months and what foods might represent opportunities to improve dietary quality.

The analysis revealed that only 49% of South African infants and young children within this age group consume a diet meeting minimum dietary diversity, increasing their risk of micronutrient deficiencies and growth issues.

That means that 51% of infants and young children are malnourished in some form, whether that be not having enough to eat, not eating a sufficient amount of the right foods, or eating too much of certain foods.

The lack of food with adequate vitamins, minerals and energy (crucial to physical and cognitive growth) leads to the prevalence of micronutrient deficiencies like stunting, wasting and being overweight.

The latest available data from the South African Demographic Health Survey (DHS) of  2016 estimates that nearly 1.5 million (one in every three) children in South Africa are already stunted and will not reach their full growth potential.

Although wasting has reached a level classified as ‘very low’ at 2.5% according to the DHS report, the statistics on children who are classified as “overweight” have also fluctuated over the years in the range of 10-17% which is classified as “high” and “very high” according to international benchmarks by the World Health Organization (WHO). In 2016, 13% (nearly 757,000) of children were overweight in South Africa.

The root cause of South Africa’s malnourished children is manifold

Research has shown that early childhood diets play a strong formative role in the future dietary choices children take with them into adulthood. Over and above fighting malnutrition, good nutrition is the foundation of a child’s survival, health and development and well-nourished children are better able to grow and learn, to participate in, as well as contribute to their communities.

Nutrition specialist for Unicef South Africa Gilbert Tshitaudzi says that combating malnutrition in all its forms is critical for the development of South Africa and that irreversible physical and cognitive damage can result from persistent nutritional deprivations.

“We live in a country where the majority of the population cannot afford to shop, full stop. Let alone at niche places. Parents — especially mothers, go without meals to feed their children.”

“With over 1.5 million children already stunted in South Africa as per the DHS report of 2016, these children will likely not reach their full growth and developmental potential,” says Tshitaudzi, adding, “Stunting is associated with poor brain development, which affects a child’s cognitive development, educational attainment and productivity in adulthood which in turn has an effect on the development potential of the country”.

Tshitaudzi points out that there are several foods commonly available to households in South Africa that are rich in nutrients but are lacking in the diets of young children. This is either due to a lack of knowledge by caregivers regarding the type of foods to give to children for their growth and development, resource constraints on the ability to afford these nutritious foods in adequate quantities, or a combination of both.

“We live in a country where the majority of the population cannot afford to shop, full stop. Let alone at niche places. Parents — especially mothers, go without meals to feed their children. Low income or reliance on grants forces them [mothers] to purchase cheap foods. Cheap foods, while affordable, are often high in calories and fat — but low in nutritional value,” says Wildish.

“So despite mothers’ best efforts, their kids are eating empty calories. We see children exhibiting the ‘triple threat’ of a low-quality diet: obesity, stunting and malnutrition — evident in the same child. Just look around the streets littered with sugar-filled drinks and chip packets.  Affordable but poison(ous). No nutritional value in them whatsoever,” Wildish adds.

But with the cost of the average household essentials food basket sitting at over R4,000 per month (over R500 more than the minimum wage) according to the Household Affordability Index released in April, this basket — comprising 44 priority items including all the food items Tshitaudzi has listed above — is unattainable to more than half of the country’s population.

“Animal-source protein, calcium and energy (specifically products like peanut butter and cowpeas) are known dietary complementary feeding gaps that cannot be affordably met by all households in South Africa, particularly the lowest spending 30-40%,” says  Tshitaudzi adding, “These households must instead rely on the cheapest available staples and struggle to meet energy and micronutrient requirements”.

Nine million school children in South Africa depend on the government’s National School Nutrition Programme (NSNP) for a meal each school day.

These food packages are expected to meet the requirements of what is generally accepted as a nutritionally balanced diet which, according to Tshitaudzi, is based on the South African Food Based Dietary Guidelines.

“Food items that are included in these packages should meet the applicable legislation of the government and the existing food labelling regulations,” says Tshitaudzi.

Nine million school children in South Africa depend on the government’s National School Nutrition Programme (NSNP) for a meal each school day. In the preschool sector, about 3.3 million children attend an ECD centre or other form of out of home care.

Wildish says that proper early childhood nutrition is paramount and sets the stage for a child’s long-term development which is “founded on the quality of care she receives during the first five years of their life”.

That’s not all: the role of nutrition feeding programmes after school hours to offset food insecurity has become even more crucial in the face of job losses and livelihoods impacted by Covid-19, which has exacerbated existing disparities in nutrition, health, learning stimulation, and services to support malnourished children.

“Guaranteed in-school nutrition bolsters growing minds and bodies and provides a compelling incentive for caregivers to send children to school. When nutrition and education are combined, they ensure children are on track when starting school — putting them on a path for education and a future as employed and civilly active citizens,” says Wildish.

The Lunchbox Fund commissions the Nutrition Information Centre at the University of Stellenbosch (Nicus) to undertake independent biennial evaluations of their nutrition programme menu and components to ensure the NPO stays abreast of best practice.

“Ingredients provided from which meals are prepared are fortified with a full range of vitamins and minerals — up to 50% of the child’s microbiotic needs in a day. Macrobiotic content of meals is supplied via the provisions supplied: carbohydrates, protein, fat — all essential to healthy growth and brain and body function,” says Wildish.

She explains that Lunchbox Fund’s “Food Mamas” prepare a combination of freshly-made meals on-site using provisions provided by the NPO.

“A healthy diet for a child should start with breastfeeding because it provides essential irreplaceable nutrition for a child’s growth and development.”

“Schools are required to augment the menu with fresh vegetables at least three times per week,” she says. DM/ ML