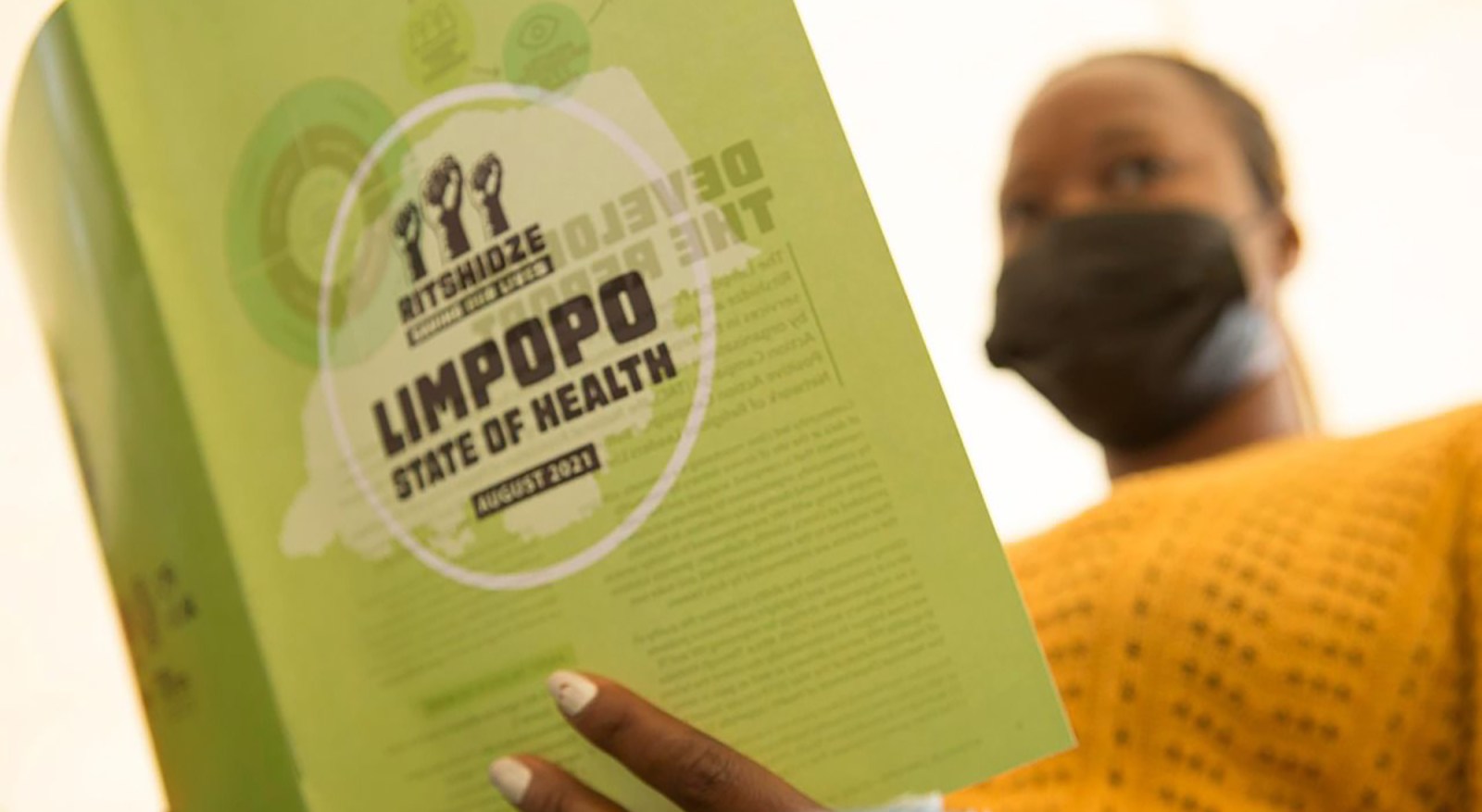 Numerous clinics in Limpopo are operating without the required number of staff members needed to deliver quality healthcare services, according to a report from Ritshidze, a community healthcare monitoring project. Activists say these staff shortages contribute to long waiting times for patients and staff being overworked, which can ultimately undermine the province’s HIV programme.

On Wednesday last week, a sick patient was met by locked gates at Madimbo Clinic in Mutale in the Vhembe district of Limpopo, according to Democratic Alliance spokesperson for health in the province, Risham Maharaj.

In a statement, Maharaj said the patient arrived around 5.30am and was “kept outside waiting for medical attention” for an hour and a half because staff said they only opened at 7am.

Madimbo is meant to be a 24-hour clinic.

The patient was referred to Donald Fraser Hospital (90kms away) where she died later that evening. On the same morning at the same clinic, a woman reportedly went into labour in front of the locked gates.

Limpopo Department of Health spokesperson Neil Shikwambana confirmed the incidents and told Spotlight that emergency services took both women to the Donald Fraser Hospital where the mother and child were fine, but the other patient died. According to him, the department is still investigating both incidents. The nurse who was on duty at the clinic that day has since been suspended.

Like Madimbo, many clinics in Limpopo appear to be operating without the required number of staff needed to deliver quality healthcare services.

According to a recent report from Ritshidze, a community healthcare monitoring project, almost 70% of the 385 patients they interviewed said there was not enough staff to meet patients’ needs. Activists say these staff shortages also contribute to long waiting times for patients and staff being overworked – which can ultimately undermine the province’s HIV treatment programme.

The report, released on 26 August, is based on the monitoring of 17 clinics and community healthcare centres in Limpopo between April and June this year.

Among the challenges flagged in the report were the numerous vacancies, mostly for professional and enrolled nurses. It noted at least 30 vacancies across the 17 facilities. Over 90% of the facility managers interviewed said that “insufficient human resources count as one of their biggest challenges”. These vacancies included pharmacists and cleaners.

At nine clinics, patients report average waiting times of four hours or more, and at four clinics some patients said they wait on average for five hours or more to be seen by healthcare workers.

Fifty-one percent of patients reported feeling very unsafe waiting for the clinic to open. “Early mornings, feeling unsafe outside the clinic, and long waiting times cause people to dread clinic days or even to stop going. This directly impacts our ability to reach 95% of people living with HIV on treatment,” the report reads.

According to the report, a circular from the national health department in 2019 instructed facility management that these public health facilities “must be open from 05:00 am to 19:00, as well as from 8:00 to 16:00 on Saturdays”. The report, however, says these opening times are not possible in many of the facilities due to staff shortages.

The department’s Neil Shikwambana said although there are 24-hour clinics in the province, some had to close due to safety and security concerns. He acknowledged staff shortages were a big concern.

“We are working on a human resources structure that will speak to our service needs,” he said, adding that they started on a “turnaround plan two or three years ago”.

According to Shikwambana, the department’s salary bill constitutes about two-thirds of its entire budget. “So, we may have shortages, but the salary bill shows the workers are there.

“We may have a high vacancy rate, but in reality, on Persal, we have a lot of personnel.”

He also said they are making the management structure less top-heavy and that they have reduced the number of deputy director-generals in the department from six to four. When people retire, Shikwambana said, they rationalise positions so that senior personnel get additional responsibilities. He stressed, however, that there is only so much the department can do because it needs unions on board and negotiations around staffing are ongoing and take time.

When pressed on when healthcare users who depend on these clinic services will see a difference in staffing levels any time soon, Shikwambana couldn’t say. “We can’t make commitments… it depends on processes. It’s a complex issue,” he said.

Figures in the Limpopo health department’s annual report for 2019/20 show that in district health services by 31 March 2020, there were 44,924 approved posts – but only 23,024 of these posts were filled at the time. This means a vacancy rate of almost 50% for district health. The vacancy rate for professional nurses in the province stood at 35%.

Under “desired service standards”, the department noted in the report that among the things they will improve are “timeous payment of suppliers to ensure sustained supply of medicines for 12 months in a financial year, decongest facilities to effect friendlier services (utilising CCMDD), improve stock management and better demand planning and forecasting to effect continuous supply of essential medicines, [and] better human resource utilisation to extend hours of service”.

However, what actually happened, as reported by the department, is that “medicines availability has been below target at all levels due to some of the essential items not awarded on new national contracts”.

According to the Ritshidze data, 38% of patients interviewed “left, or knew someone who left, a clinic without the medication they needed”. It was mostly contraceptives that patients reported as being out of stock, but some patients also reported having left the clinic without HIV and TB medicines. Facility managers at the clinics said when the clinic experienced stockouts, in “50% [of cases they] were forced to send people away empty-handed, and [in] 50% [of cases they] gave them an alternative”.

Shikwambana told Spotlight the stockouts are not unique to Limpopo and that these problems are common across provinces. “There are often issues with medicine suppliers… we also rely on the international medical markets. We are not trying to shift the responsibility, but there are many factors at play in medicine supply.”

Shikwambana said the department will work through the contents of the Ritshidze report and decide on the best way forward.

The provincial department of health has flagged issues around “courtesy of healthcare workers” as a concern in its annual report. The department reported it has a “complaints management system that enables [it] to monitor whether patients are treated with courtesy”. The department acknowledged in the report, however, that there have been “a few incidences of negative attitude towards patients”, but said this issue has been addressed.

The Ritshidze report paints a different picture. The report highlights, among others, “the discriminatory and insensitive attitude some nurses and clinic staff have toward key populations, including sex workers and members of the LGBTQI community”.

According to the chair of the Treatment Action Campaign (TAC), Sibongile Tshabalala, the data shows that these staff attitudes are among the reasons why the province has not reached the 95-95-95 targets. The TAC is one of the partner organisations in the Ritshidze project. The “95 targets” refer to the UNAIDS strategy aimed at 95% of people living with HIV being aware of their status, 95% of those who know their status being on antiretroviral therapy (ART), and 95% of those on treatment being virally suppressed – all by 2025. (The UNAIDS targets for 2025 also include some additional goals.)

According to the report, while 91% of people living with HIV know their status in Limpopo, only 73% of those people are on HIV treatment, out of which 87% are virally suppressed.

Tshabalala, on the Ritshidze blog, said, “Only 57.9% of patients thought that the staff were always friendly and professional. This lack of professionalism and bullying attitudes by some nurses have come to define the experiences of many patients reliant on Limpopo’s clinics. We need a clear strategy to change this as it inflames tensions between communities and their local healthcare workers. Most devastatingly, it has removed trust and confidence in the healthcare system and has resulted in dire impacts on patients’ care.”

The report found that 59% of people living with HIV surveyed said staff at clinics shouted at them if they missed an appointment, with 12% alleging that they were sent to the back of the queue for missing an appointment.

Shikwambana said, “Anything that has the ability to derail the province’s efforts against HIV, is concerning.” He encouraged health users, especially in rural areas, to use the department’s complaint processes to report such incidents. DM/MC