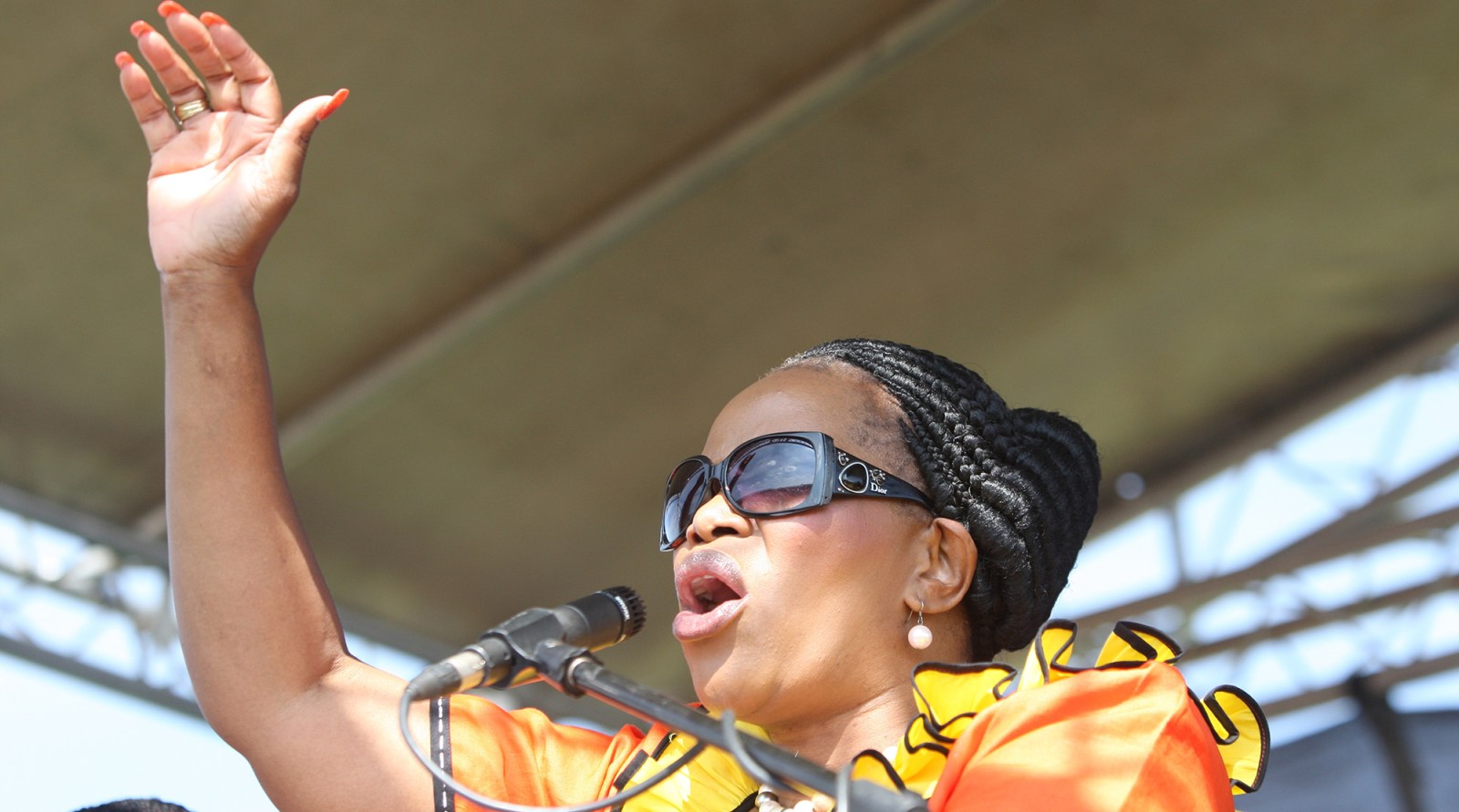 Strong, resilient and compassionate… these are some of the words people who knew her associate with Zanele kaMagwaza-Msibi, the National Freedom Party president who died on Monday.

Born in February 1962, Zanele kaMagwaza-Msibi rose through the ranks of the Inkatha Freedom Party (IFP) before founding the National Freedom Party (NFP) in 2011, where she flung open the proverbial doors to a landscape of possibilities for those who were seeking an alternative to the IFP, and for young women who were keen on politics and in need of a bold, black, female mentor.

kaMagwaza-Msibi, or VZ as she was known, died in an Umhlanga hospital on Monday.

The former school principal had been hospitalised since last week, reportedly for heart problems related to the debilitating stroke she suffered in 2014.

The NFP’s KwaZulu-Natal secretary, Zandile Myeni, told Daily Maverick that she had been enchanted by kaMagwaza-Msibi’s “boldness” while still in the IFP.

“There are so many ways to describe her. She was a mother, resilient. She was a bold traditionalist and a feminist, in an African context. She was deeply moved by the situations of women in rural areas and how lack of policy implementation had failed to improve their lives.

“She was deeply aware of how patriarchy needed to be addressed, but also wouldn’t admit someone to a leadership position just because they were a woman. You had to prove yourself. You had to be a strong leader,” said Myeni.

Top women leaders often thought they had to behave like men to “make it”, said Myeni. “Not kaMagwaza-Msibi. She was strong and fair and she embraced her femininity.”

The history of the NFP will always be linked to that of the IFP and the party will, to some extent, be viewed as a front for the African National Congress, backed by ANC money that nearly dealt the IFP a fatal political blow.

But kaMagwaza-Msibi’s rise to political prominence was much more than the result of a plan hatched from Luthuli House. Believing such would give the ANC far too much credit.

The NFP’s trajectory was the result of several fortunate and later devastating events.

Up to the 2009 national election, which saw Jacob Zuma elected state president, kaMagwaza-Msibi was a popular figure in the IFP who had ambitions of leading the then 35-year-old organisation.

But, like several predecessors, she hit the immovable force of IFP founder and president Mangosuthu Buthelezi.

Following the 2009 election, kaMagwaza-Msibi tried to use internal IFP processes to have herself elected leader when she was still national chairperson. Largely embraced by the media and political pundits, she was viewed as a change-maker, the fresh face needed to breathe life into the IFP, which had over the previous decade lost control of KwaZulu-Natal, eThekwini Metro and other large city centres such as Richards Bay.

However, she was “dismissed”, “abandoned the party”, “resigned” or “fled”, depending on whom one talks to. The manner of her departure now being irrelevant, she did take a good chunk of self-proclaimed “reformist” IFP members with her to establish the NFP.

Regardless of how she left, the NFP was disastrous for the IFP. Before the 2011 local government election the IFP controlled 32 municipalities in KZN. Afterwards, it held two.

After the 2011 elections, the NFP entered coalitions with the ANC in 19 hung municipalities. kaMagwaza-Msibi was elected mayor of the Zululand District Municipality.

The IFP tried to enter into coalitions with the NFP, but the party would only do so if the IFP apologised for calling it an ANC proxy. That didn’t happen.

In the 2014 national election, the NFP won six seats in the National Assembly and kaMagwaza-Msibi was sworn in as an MP. The IFP had secured 10, down from 18 from the 2009 election. The IFP also lost its position as the official opposition in the KwaZulu-Natal Legislature to the Democratic Alliance.

kaMagwaza-Msibi’s support for the ANC in 2011 was rewarded in the 2014 general election when then president Jacob Zuma appointed her deputy minister of science and technology. While she said her party would maintain its own brand and continue to question the ANC, the NFP essentially rubber-stamped most motions or legalisation brought by the governing party.

kaMagwaza-Msibi was ideologically in line with her IFP upbringing — a conservative and a Christian who believed in traditional values and would champion the cause of women, but would never stoop to demean the sanctity of family or motherhood. Indeed, she considered being a mother one of her greatest achievements, according to some of her closest friends and allies.

Her political career was dramatically cut short when she suffered the stroke.

Unable to speak or walk, she spent more than two years in recovery before she was seen in public, and, even then, she was a shadow of her former self. The fledgling NFP was unable to manage the inevitable vacuum. kaMagwaza-Msibi, after all, was the party in the eyes of the voting public.

The vacuum was well reported on, before a gatvol media — and subsequently the public — lost interest in opposing factions within the NFP calling press conferences and claiming leadership.

This chaos led to a loss of administrative control. Ultimately, the NFP was disqualified from voting in the 2016 local election because of its failure to pay registration fees, except in rural Nquthu Municipality, where the local leadership paid for itself.

Before the 2019 national election, kaMagwaza-Msibi reappeared on the campaign trail.

She had painstakingly taught herself to speak and walk again with limited assistance. But this campaign differed from those of years gone by. She would appear at events, but seldom say anything. It was evident that she had endured a life-changing event and her speech was impaired, although those close to her were able to understand what she was saying.

Her years of ill health and the continued infighting cost her party dearly, and by 2019 the NFP obtained just two National Assembly seats. The IFP grew its share to 14 and regained its position as the official opposition in KwaZulu-Natal. The pendulum had shifted.

The NFP was preparing for the 2021 elections when kaMagwaza-Msibi died, and will be contesting in all provinces besides the Northern Cape. Its focus, however, will be Zululand, in accordance with the wishes of its former president.

It is unclear how it will perform as there is limited opinion polling in the public domain. But, based on South Africa’s nearly 30-year-old democratic political history, once small new parties begin to lose support, they seldom regain lost ground. The loss of support for the NFP is likely to manifest in support for the IFP.

kaMagwaza-Msibi’s political career on the big stage may have been unfairly cut short, but the political impact left by the woman born in the deep rural area of Makhosini in KwaZulu-Natal will be felt for years to come, particularly by young girls she mentored and encouraged, who are now women.

Nkosingithandile Mbambo, a 31-year-old chef, business owner and NFP youth leader, described kaMagwaza-Msibi as “a female leader I could look up to.

“She was fearless. She dominated around men and her views were heard.” Thanks to kaMagwaza-Msibi she began understanding how women could and should lead, said Mbambo.

“She got me really interested in politics, and I started thinking: If KaMagwaza-Msibi can lead a party with a lot of men, then so can I one day. I think of the words to describe her. She knew exactly what she wanted. She had class, dignity and respect. She had a lot of respect for herself, and she saw all people as deserving of her respect.

“I think her death is going to motivate the party to work even harder, to approach the election with a view to do something great for her, in her honour.” DM