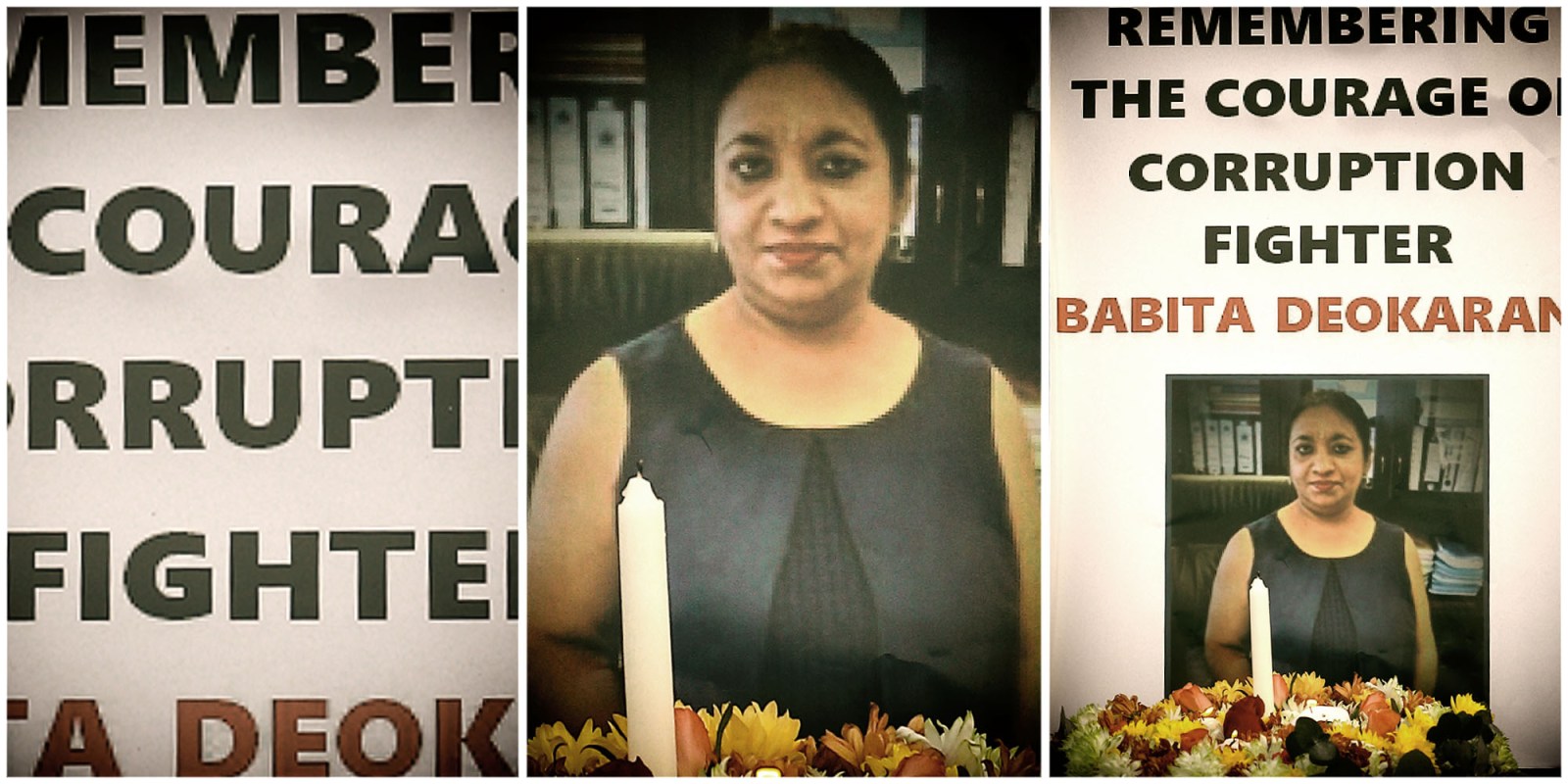 A candlelight vigil for corruption fighter Babita Deokaran at the Office of the Premier on 26 August 2021 in Johannesburg. (Photo: Gallo Images / Fani Mahuntsi)

Dirty tenders that become dirty deals in the Gauteng Department of Health may be difficult to prove, but are not difficult to spot.

“One of the outstanding features of a dodgy deal is that the service provider is not interested in or committed to delivering on the project. If you’ve got a clean deal and a clean project then you have service providers who want to deliver well and exceed expectations because they want to be able to get new business in the future,” says *EL, a long-time senior employee in the department.

He adds: “[In dodgy deals] They’re not going to be skilled, are not bothered to be effective or won’t stick to their contract because they’ve already bought their contracts and it wasn’t on performance.”

EL was a close colleague of Babita Deokaran’s, the slain acting chief director of finance in the department. When Deokaran was killed on 23 August, it was known that she had been working with the Special Investigating Unit (SIU) for many years to expose corruption in the Gauteng Department of Health.

EL first spoke to Maverick Citizen in the days after Deokaran’s killing became news. He believes her long years of collaborating with the SIU to clean up a department “known to be among the dirtiest” suggests she was close to joining the dots and producing the financial paper trail to implicate people not just in the personal protective equipment scandals that have rocked the province since Covid-19 hit South Africa, but also in corrupt deals that stretch back over the past 10 to 12 years.

Deokaran’s assassination, EL says, points to growing desperation among senior people and political appointees who signed off on irregular contracts and procurement deals. If convicted they stand to face actual prison time.

But EL stresses that it’s a vast and tainted web of looting and corruption that has taken root in the department. “It starts with the supply chain system that is initiated by politicians; then you need senior officials who will operate the system and an organised syndicate of people in various departments who will make things go through. Finally, things are forced through a financial committee and heads of department (HODs) who, if they don’t do it, will be removed.”

It leads to EL’s other point that appointments of people who should have oversight, such as HODs and CFOs, are deliberately kept as acting positions, they’re also short-lived appointments. “Since about 2008 we’ve had mostly acting HODs and acting CFOs. At one stage we had at least one per year, so seven years, seven CFOs, seven years, seven HODs, and most of them acting. The bottom line is that an acting HOD cannot complete a disciplinary procedure when there’s an allegation of an irregular contract or tender. At the same time directors-general are shuffled between portfolios to shield them from possible investigation and conviction,” EL says.

“We once had a deputy director from Chris Hani Baragwanath [Hospital] who was made the acting CFO. We have also had a chief director who appointed deputy directors who had no tertiary education, bypassing the system because she needed those people in those positions.

“The point is to bring dummies into key management,” he adds. So there is a culture of over-promotion and juniorisation to ensure that appointees are pliable.

EL adds that even when there have been investigations, a new HOD won’t know the witnesses or the finer details of a case. If they do get close to holding someone to account they are removed or pressured and threatened to resign. And if the SIU does investigate, the process comes through the premier then senior politicians and then to HODs – it leaves the chance for independent investigations hopelessly comprised. It can also take years to get a case to court as the National Prosecuting Authority moves at a snail’s pace on prosecutions. This leaves witnesses and whistle-blowers exposed and unprotected.

EL also alleges that the department’s tenders, contracts and deals have been vehicles to fundraise for the ANC. Political appointees who bring in more money to the party have a better chance of rising through the ANC ranks.

EL says that this “cover” gives protection to dirty officials from getting bust but has itself become further corrupted as politicians skim off more for themselves instead of passing it over to the ANC.

About EL’s long tenure in the department he says it’s no secret that the State Security Agency is used to intimidate and harass whistle-blowers and those who raise the alarm about corruption within the department.

“We have had HODs who get phone calls and are threatened. The person on the line knows the ID numbers of family members, where their children go to school and other such personal information,” EL says.

It has come at the costs of service delivery and “full-scale sabotage”, says EL, for the people in the department who are still trying to serve the citizens of the province with a basic right to healthcare. EL says it takes the shape of necessary procurement of medical equipment and supplies being blocked or delayed. It was also clear from years of non-maintenance at the department’s own head office, the Lisbon Building in downtown Joburg, which burnt down in 2018. After the fire, EL says it became obvious that the overpriced IT system was a sham. The servers were never backed up, meaning records and files literally went up in smoke. The promise from the company that won the IT tender didn’t deliver to the very basics of “even being able to work on multiple documents simultaneously”, never mind their promise of implementing a smartcard-type patient record system throughout the province.

“Things have become so worn down. There are people who want a clean department but how do you do that when things are so damaged and when you are up against an organised syndicate? Someone like Babita was one of few people left in the department who was still trying to make it work,” he says. DM168