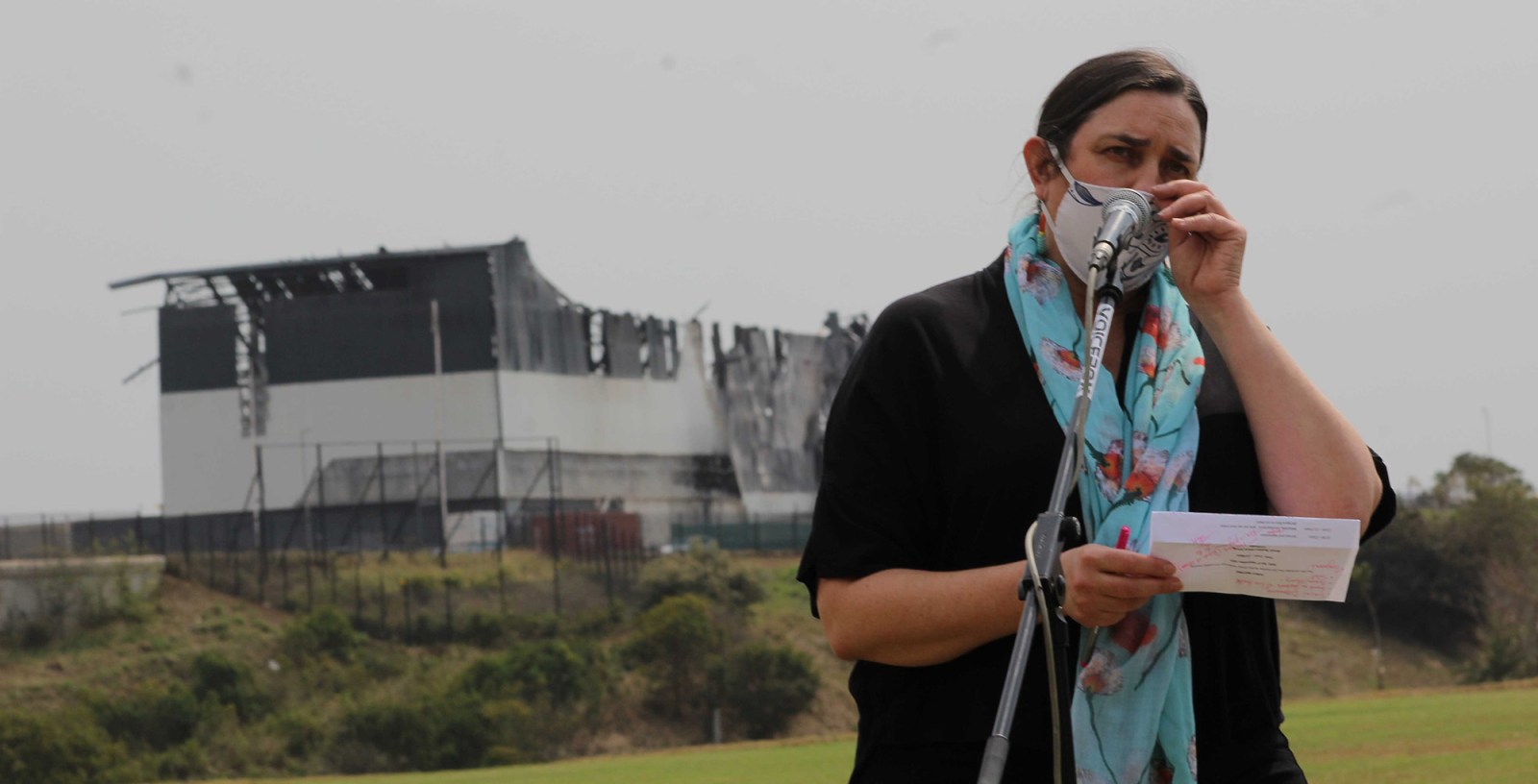 Durban University of Technology researcher Kira Erwin speaks at a public meeting in Durban in the aftermath of the arson attack the UPL chemical warehouse, visible 400m behind her. (Photo: Tony Carnie)

Residents in the vicinity of the UPL warehouse in Durban are demanding that a team of independent doctors and medical specialists be brought in immediately to conduct a comprehensive health monitoring project for people exposed to an 11-day toxic chemicals fire.

The call was made at a public meeting at the Reddam House college in Umhlanga at the weekend. Locals said they were fed up with the lack of detailed information from both the government and an Indian-based multinational on the health risks of airborne farm chemicals after the mid-July arson attack at Cornubia.

Because attendance was limited to 100 people due to Covid regulations, representatives from surrounding residential areas also read out several messages of concern from fellow residents.

Beaches from Salt Rock to the Umgeni River have been closed for seven weeks after 3.5 tonnes of fish and other marine creatures were killed by the torrent of farm poisons that poured into the sea near Umhlanga.

Now the focus is shifting belatedly towards measuring the potential short- and long-term health damage to thousands of residents exposed to fumes — especially young children, pregnant mothers, the elderly and those with respiratory conditions.

Anecdotal reports emerged at the meeting about dogs dying in Phoenix, arsenic residue and other strange “crystalline films” forming in swimming pools and ponds; dying trees and crops turning brown in vegetable fields nearly a kilometre from the UPL warehouse.

The National Department of Health has yet to issue a detailed statement on what measures it is taking to monitor human health damage or collect blood samples from affected communities — although a senior department official recently told a parliamentary meeting that unspecified action was under way.

Rico Euripidou, a researcher and epidemiologist from the groundWork environmental justice group, said the health-based advice from the government and UPL issued at the time of the fire was inconsistent with the potentially severe risks posed by highly toxic chemicals, some of which had been banned in Europe and other parts of the world.

So far, he said, there did not seem to be any programme to record medical complaints geospatially or to establish an adequate surveillance system.

Two of the most serious impacts to consider were effects on pregnant women or neurological impacts on young children. These potential impacts should be examined by international experts, independently of the risk assessment consultants contracted by UPL.

Kwanele Msizazwe, a community leader from the nearby Blackburn village informal settlement, said there had been a lot of talking. Now the time was for action.

“Some people got sick and went to clinics and doctors, but we don’t have knowledge of how dangerous it is… There are people with vegetable gardens that are changing colour. Spinach is supposed to be green — not brown… even the trees nearby are dying.”

Jeff Naidoo, from Izinga Ridge, said most residents in his area had medical aid, but were still not getting information from the powers that be: “Let’s get accountability from UPL. What were the [chemical toxicity] results? Let people not be kept in the dark.”

Anton Muller, from Prestondale, said residents in his area had a grandstand view of the fire as they sat in their homes or manned community road blockades, but had no idea of what they were inhaling. Among them was Kingfisher Crescent resident Angelo Tselentis who reported that “our eyes and throats were burning as we stood guard [at roadblocks]. We could not see 2m in front of us because the smog was so thick”.

Muller said fellow resident Chris Fraser was worried about “a weird crystalline film” on the sides of his swimming pool.

Warren Horsley from Mt Edgecombe insisted on “truthful and correct answers” to the concerns raised by fellow residents while Theo Pillay from Phoenix said he had heard reports of dogs dying in his area due to the chemical fumes.

Ravi Pillay, the provincial MEC for environmental affairs, said he agreed that the public health impact of the UPL disaster should be prioritised and should trump “any other concerns”. The multi-disciplinary team appointed by the government was “not happy with the level and regularity of information” received from the company, while the Department of Health was also engaging with the University of KwaZulu-Natal over a “sustained study of the community”.

But Pillay refused to budge on the question of admitting community members into meetings of the inter-governmental Joint Operations Committee (JOC) investigating the issue.

“We seem to have a difference of opinion. We hear and respect the views [of civil society], but the officials have a different view — that this is a government decision-making body,” he stated, suggesting that there was still room for regular communication of information to the community.

But this proposal did not go down well with many, including Steve Woodhall, who slammed the MEC’s “Daddy knows best and we will get back to you” approach.

Prof Tracy-Lynn Field of the School of Law at Wits University said civil society was “sick of being disrespected and marginalised” by the JOC, a body that took significant decisions on what information was released to the public.

Field noted that national Environment Minister Barbara Creecy had reiterated the importance of transparency in the government response to incidents of this nature. Creecy had also supported the recommendation made by the parliamentary portfolio committee on environmental affairs to establish a multistakeholder forum that would receive regular reports from the JOC and ensure representation of relevant stakeholders, including community representatives, researchers in the health fraternity and NGOs.

“We insist on that. We demand it,” said Field.

In an eight-point list sent to MEC Pillay after the meeting, the UPL Cornubia Fire Civil Society Action Group demanded immediate access to all air quality samples taken during and after the fire.

Adequate health assessments and surveillance should also be undertaken immediately and civil society advised of the plans for doing so.

“We need an adequate and immediate medical response by medical professionals — not risk assessors,” the group said.

There should also be transparent communication to address the multiple concerns raised by the community “including, how to deal with fallout impacts such as arsenic in swimming pools, ponds and water features in the affected areas”.

“What is the procedure for mapping these features, notifying people of the risk, how to inactivate the arsenic [if possible)] and how to safely dispose of the water before refilling and re-checking?”

Further information was also needed on UPL’s financial commitment to provide compensation for the impacts on public health and the environment, including the cleaning and decontamination of buildings, food gardens and homes.

The government should also provide assurances about its future position on the regulation and location of toxic chemical storage facilities in close proximity to residential areas and the need for emergency response plans. DM