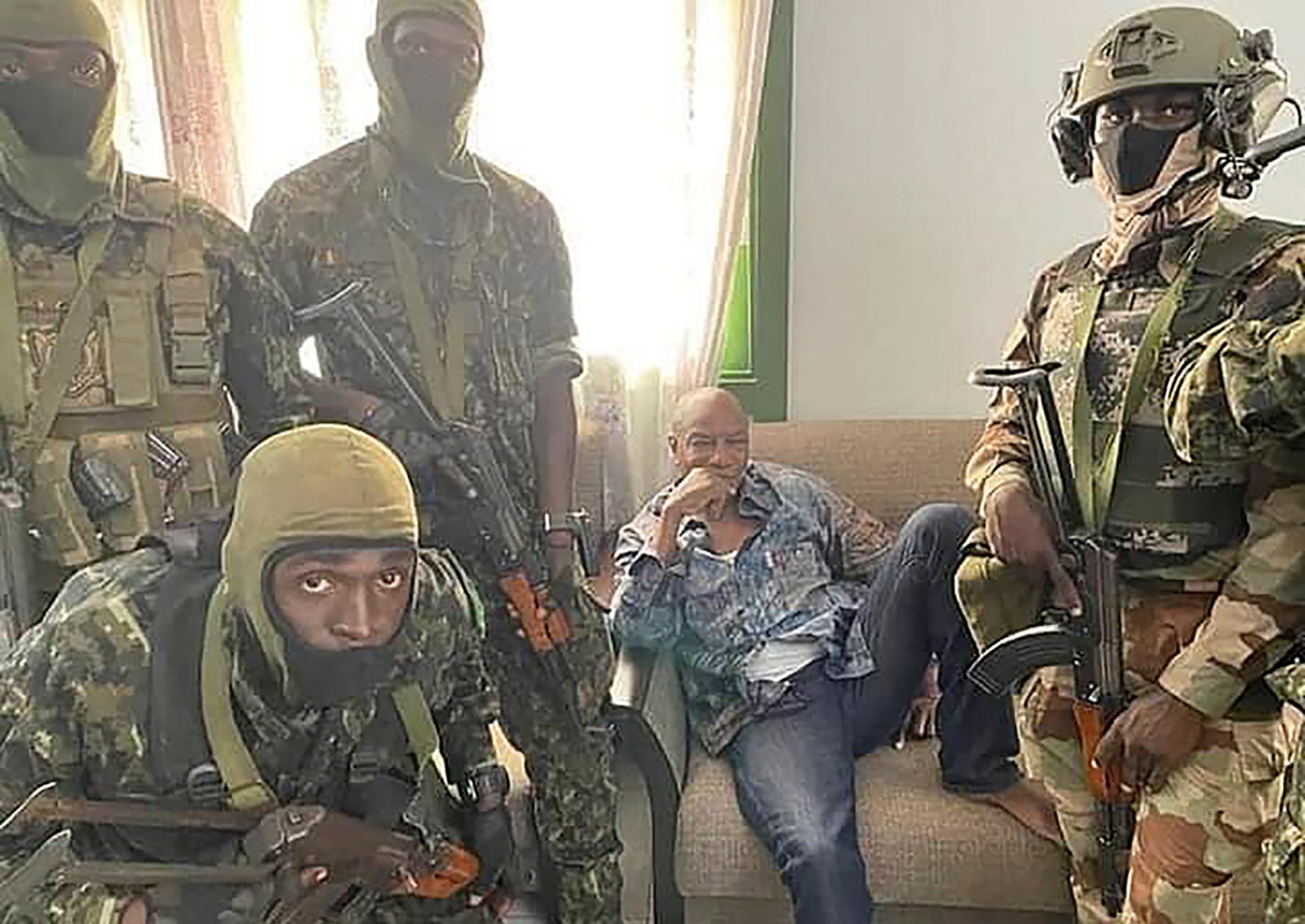 Guinea’s President Alpha Condé appears to have been toppled in a military coup on Sunday and is being held by rebel soldiers. But Condé’s government has denied the government has fallen and it’s not clear if it intends to fight back.

Images of a dishevelled Guinea President Alpha Condé in the custody of dissident soldiers have been widely circulated on social media. The rebels, under the command of Colonel Mamady Doumbouya, head of a special forces unit, have also taken control of the national broadcaster, both events suggesting the coup is all but a fait accompli.

After hours of gunfire around the presidential palace and a nearby hotel in the capital, Conakry, earlier on Sunday, Doumbouya said in a broadcast that Condé was in the custody of his military forces which had seized control of the country, dissolved its government and sealed the borders.

“The personalisation of political life is over. We will no longer entrust politics to one man. We will entrust it to the people,” Doumbouya said, justifying the coup by citing “the trampling of the rights of citizens” and “the disrespect of democratic principles”.

The defence ministry denied that the Condé government had fallen and said in a statement that the presidential guard and security forces “had contained the threat and repelled the group of assailants. According to unconfirmed reports, three soldiers died during the fighting.

“Security and sweeping operations are continuing to restore order and peace,” it added.

But most observers are certain that Condé has been toppled.

“While some, like the defence minister, have claimed that the coup has been foiled, I don’t see any evidence of that (nor do any of the people I have been speaking with on all sides of Guinean politics),” said Ambassador J Peter Pham, former US special envoy for the Sahel.

“It’s clear from videos we’ve all seen that President Condé is in the hands of dissident military forces and that those forces are in control of the national broadcaster — two of the classic steps in staging a coup d’état that render a putsch near impossible to reverse (having physical control of the head of state, controlling broadcasts).”

The videos of Condé flanked by coup soldiers appear to have been taken at the Kaloum Hotel, about 500m from the presidential palace. Doumbouya’s soldiers seem to have attacked Condé’s guard as he emerged from the palace on Sunday morning, a former White House official focused on Africa said.

It was not clear if Condé was heading for the hotel and was intercepted or if he was forcibly taken to the hotel by them.

But his captors were clearly not mistreating him, the former White House official said. He noted that in one of the videos circulating that a junior soldier sitting next to Condé respectfully calls him “Excellence” (“Excellency” in French) and that a subsequent video of him being put into a minivan and driven off shows that he was not in handcuffs or otherwise restrained and not visibly bleeding, bruised or manifesting any other signs of abuse.

The official recalled that in 2010 Condé had been the first president to be democratically elected in Guinea. “He was an icon, a professor of the Sorbonne and head of the African Students’ Association in Paris.”

While in opposition, he had been in prison under a death sentence.

But Condé’s fatal error had been to refuse to stand down from power last year when the constitution demanded that he should do so after two terms in office. Instead, he manipulated an amendment to the constitution and was re-elected in a highly controversial and violent election in which many Guineans died in protests.

“The constitutional amendment was a bridge too far,” the former White House official said.

What exactly motivated Doumbouya and his soldiers is not clear, however. While Condé’s clinging to power and his 11 years of rule were a disappointment to many, there are also rumours circulating of foreign interference.

“It’s a disappointment, a feeling of failure,” The Washington Post quoted Mamady Kaba, president of the League for Rights and Democracy in Africa in Conakry as saying. The report said nearly half of Guineans continued to live in poverty despite the nation’s immense natural riches.

“Guinea is the Saudi Arabia of bauxite,” said the former White House official, referring to the ore which is refined into aluminium.

And while Condé turned Guinea into a top bauxite exporter and attracted considerable investment and trade, critics say the wealth did not trickle down to ordinary citizens. Some say he mortgaged off the bauxite to Chinese companies which over-exploited the resource and killed the price.

Despite these local grievances, some observers suspect a foreign hand in the coup. Doumbouya’s strong connections with Guinea’s former colonial power, France, have inevitably aroused familiar suspicions. Doumbouya, who reportedly held dual-Guinean-French citizenship, is married to a French woman and served until just a few years ago in the French Foreign Legion.

“He was essentially seconded back to Guinea to lead a French-trained and equipped elite unit,” one source said. But no evidence has emerged of a French hand in the coup and it’s not clear why France would have wanted Condé out of office.

It’s also not clear what the African Union, the Economic Community of West African States (Ecowas) and foreign powers such as France, the European Union and the US will do about the coup, if it is confirmed — apart from issuing pro-forma condemnations.

Both the AU and Ecowas have formal policies which call for a member state to be suspended from the organisations for executing an unconstitutional change of government.

Pham, though, believes, “The region and, by extension, the international community will have limited leverage.

“First, there is the question of political will. The fact is that for their own reasons, European countries have been unwilling to sanction recent coups in West Africa. The US is the only major power to still suspend military assistance to Mali, for example (an action taken when I was special envoy for the Sahel following the coup last August).

“Second, Ecowas won’t be able to try to close borders with Guinea the way it did with Mali last year, because Guinea is not landlocked and Mali, which is still suspended from the regional body, isn’t likely to honour a blockade. Third, unlike Mali and Chad which are part of French-supported monetary unions, Guinea has its own currency.” DM