Covid coordination and cooperation: BRICS fails to stand as one 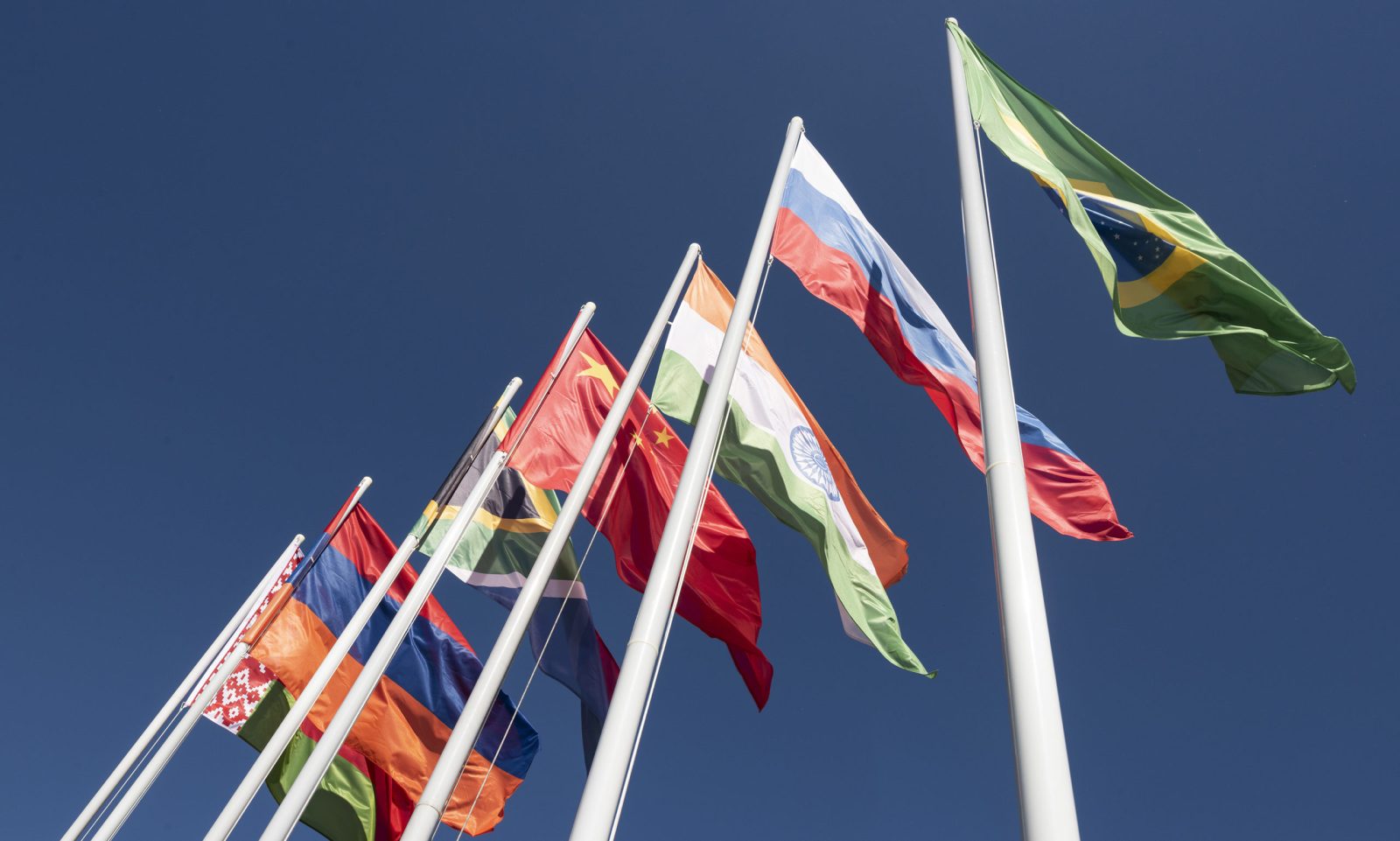 Flags of the BRICS countries.

The five countries have been criticised for not supporting each other on vaccination roll-out.

BRICS, the bloc of four major emerging economies of Brazil, Russia, India and China that also includes South Africa, talk a good game on international cooperation – when it is exhorting others.

But, say some analysts, when it comes to delivering benefits to the world or even to each other, especially when the chips are down – such as when a pandemic strikes – its record is not so great.

BRICS will hold its 13th annual summit, to be hosted online by India, next week.

The wide discrepancy in Covid-19 vaccine rates between the countries suggests a lack of coordination and cooperation. China has fully vaccinated 63.64% of its population; Brazil 29.1%; Russia 25.25%; but India only 10.82%; and South Africa trails at 10.26%.

Some BRICS countries have berated rich nations for “vaccine nationalism”, hoarding Covid-19 vaccines for themselves while the rest of the world goes wanting. But is it any better?

“The Covid-19 pandemic has tested the BRICS countries’ collective strength, and found them largely wanting,” Luanda Mpungose, a researcher for the SA Institute of International Affairs, writes in a report for the Africa Portal this week.

“The bloc has therefore missed a chance to bolster its advocacy of international governance reform, and cast doubt on its fitness for purpose in responding to critical global challenges,” she adds.

The BRICS Information Center at the University of Toronto in Canada, which tracks the compliance of the five countries against the commitments they make at summits, is, however, more generous in its assessment.

The centre gives BRICS a collective 100% for meeting the commitment it made at its virtual Moscow summit last November to help develop Covid-19 vaccines and ensure they are “disseminated in a fair, equitable and affordable basis”.

It gives the bloc 70% for its commitment to help Africa “address the intertwined health, economic, and social effects of Covid-19”.

This difference in assessment of the BRICS countries’ performance in disseminating Covid-19 vaccines may arise from the vagueness of the original commitment, the complex detail of the distribution of Chinese- and Russian-made vaccines, and from the fact that the BRICS Information Center did not assess how much the BRICS countries had helped each other – rather than the world at large – with vaccines.

As Mpungose points out, the pandemic has hit the BRICS countries hard. India has recorded the highest number of infections in the group (and the second-highest globally, after the US), reaching 32.8 million this week, with more than 439,000 deaths.

Total Covid-19 deaths across the five countries stand at 1.286 million, with Brazil and India accounting for almost 80% of these.

“This heavy toll – and the fact that the rich countries of the G7 have purchased over one-third of the world’s Covid-19 vaccine supply, despite accounting for only 13% of the global population – should have provided an impetus for stronger cooperation among the BRICS countries,” Mpungose says.

But instead the BRICS countries “have seen a divergence, inconsistency and lack of cooperation on Covid-19 vaccination”, Mpungose writes, quoting Vishwas Satgar of the University of the Witwatersrand, who spoke at a recent webinar hosted by the BRICS Policy Center.

Satgar berated the West for its selfish attitude towards Covid-19 vaccines. He especially rebuked the European Union for opposing the campaign by South Africa and India at the World Trade Organization to secure a compulsory waiver of the intellectual property rights of international pharmaceutical companies to allow developing and emerging countries to manufacture their vaccines without paying royalties.

But Satgar said Russia and China, which both produce their own Covid-19 vaccines, were also “playing vaccine diplomacy games” by competing with Western vaccine manufacturers for business in the developing world. They were entering into commercial deals for vaccines with African countries instead of “stepping up to make their vaccines available as global public goods”.

“They’re not showing a commitment to a global commons around vaccine knowledge technology. With new variants coming and the Third Wave hitting Africa, this is a dire situation.”

Karin Costa Vazquez, from the Center for BRICS Studies at Fudan University in China, recently told the Indian newspaper Financial Express Online that BRICS had “failed to provide a robust collective response to the health crisis at its 12th summit in Russia”.

This was despite Russia being the first country to register a Covid-19 vaccine and call on the other four BRICS countries to cooperate in its production and distribution; and that China had announced its intention to make its homegrown vaccine a global public good.

There was a lack of the necessary focus on treating Covid-19 at the 2020 summit, she said. This was indicated by Brazil being more concerned about the economic impact of the pandemic and by India ranking counter-terrorism as the world’s top priority while remaining “practically silent on the response to the pandemic, despite being a global pharma powerhouse”.

“Negotiations resulted in vague commitments and the revival of old proposals such as the creation of the BRICS Vaccines Research and Development Centre presented by South Africa in 2018,” Vasquez said.

This proposal will undoubtedly be discussed again at next week’s summit, though it’s by no means clear it will advance towards implementation, in part because of political disagreements within BRICS, Mpungose told DM168.

The huge surge of infections that India suffered in the second quarter of 2021 prevented it supplying many other countries, including the Africa Centre for Disease Control, which was relying heavily on it.

South Africa originally proposed the vaccines centre at the 2018 Johannesburg summit it hosted. The country has lobbied hard to host the centre, but it looks as though China has hijacked it by offering to incorporate it into its own vaccine R&D centre.

Despite the pronouncements at the Moscow summit and later meetings, actual cooperation among BRICS countries on Covid-19 vaccine development and distribution has been lacking.

Part of the problem has been that some BRICS countries have been wary of the vaccines produced by China and Russia.

Although Russia was the first country in the world to register a Covid-19 vaccine, known as Sputnik V, in August 2020, doubts lingered about its efficacy and safety, largely because of the rapidity of the trials and lack of transparency about the raw data. As a result, the World Health Organization (WHO) has yet to approve the vaccine.

The Brazilian Health Regulatory Agency initially blocked Sputnik V but reversed this decision in June 2021 and allowed the import of 928,000 doses, Mpungose said.

India received 125 million doses of the vaccine in May 2021, but has not incorporated it into its free government-supplied vaccine programme, citing supply shortages.

The South African Health Products Regulatory Authority has not approved Sputnik V for use, pending further data from the manufacturers. It approved China’s Sinovac in July 2021, but has not announced any procurement plans.

The WHO granted the Sinovac and Chinese Sinopharm vaccine emergency-use listings in May and June 2021, respectively. Brazil participated in Sinovac trials and, after positive results, has continued to use this vaccine.

India accepted the WHO certification of Sinovac and Sinopharm, but it’s unclear if the country will include the Chinese vaccines in its immunisation programme, Mpungose said. South Africa gave the Sinovac vaccine the green light for use in July 2021, but has yet to announce any procurement plans.

Mpungose noted that despite the fact that India accounts for 50% of all global vaccine supplies – mainly through manufacturing a local version of the Oxford/Astra Zeneca vaccine under licence – it has fully vaccinated only 10.82% of its population against Covid-19.

The huge surge of infections that India suffered in the second quarter of 2021 prevented it supplying many other countries, including the Africa Centre for Disease Control, which was relying heavily on it.

In South Africa, Aspen Pharmaceuticals is “filling and finishing” the J&J vaccine in Port Elizabeth and the Cape Town-based Biovac company will be doing the same with the Pfizer-BioNTech Covid-19 vaccine in 2022 for distribution within Africa.

Yet, currently, just 10.26% of South Africans are fully vaccinated against Covid-19.

The Indian and South African vaccine producers are manufacturing these vaccines under licence from the patent holders.

In an attempt to go further, the two countries’ governments led a push at the World Trade Organization in October 2020 for a waiver of the intellectual property rights of the patent holders of Covid-19 technologies and vaccines.

This would allow South Africa, India and others to manufacture these vaccines without permission from the patent holders and without paying them.

But BRICS foreign ministers did not collectively support this proposal until June 2021, eight months after it was first submitted, Mpungose notes.

China and Russia had previously remained silent on the issue, while Brazil initially opposed the idea, in support of then US president Donald Trump.

Brazil became more supportive only in early 2021, after India said it would start sending Covid-19 vaccines to key partner countries and US President Joe Biden’s administration announced its support for the proposed IP waiver. DM168