Save our jobs, save our summer by getting the jab, resi...

Save our jobs, save our summer by getting the jab, residents urged at Athlone drive-through vaccine centre launch 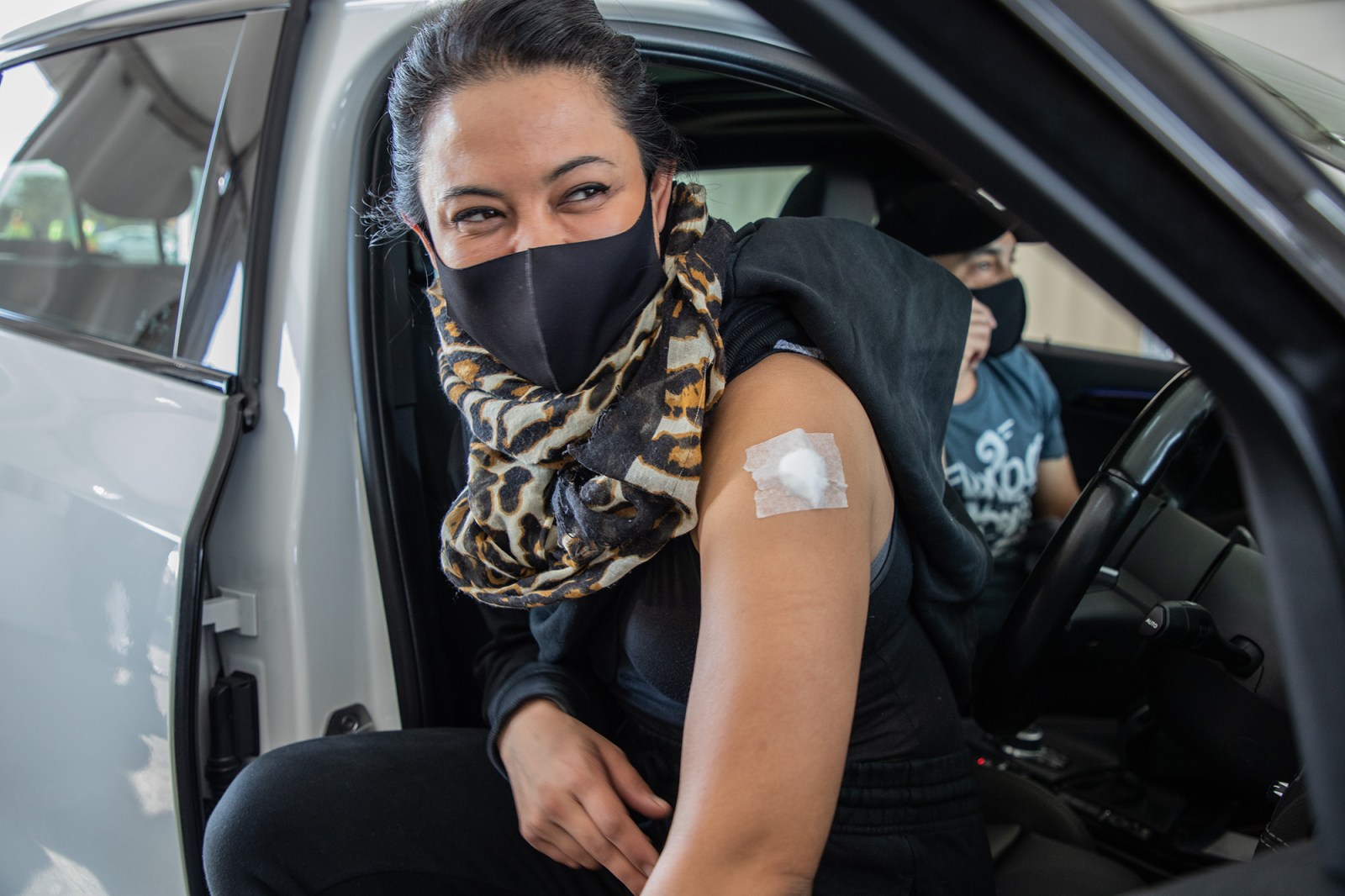 A woman smiles after receiving her Covid-19 vaccine at the drive-through vaccination site in Athlone, Cape Town on Thursday, 2 September 2021. (Photo: Victoria O’Regan)

Save the upcoming summer end-of-year season – and jobs – by getting vaccinated, is the key message the Western Cape government is pushing as Covid-19 vaccinations reach the two-million mark. The province launched a drive-through vaccination centre in Athlone on Thursday.

The stadium, one of Cape Town’s most iconic soccer venues, had been converted into a mass vaccination centre two weeks ago. The drive-through site will open to the public on Friday and is the first public drive-through site in the province, where the aim is to administer 4,000 vaccines per day.

The drive-through is not only for cars, but taxis and buses, too. “It’s tailor-made for everyone, so there’s no excuse [not to get vaccinated],” said Mbombo.

During the launch, MEC for Social Development Sharna Fernandez said: “People actually don’t have to get out of their vehicle – those who are fearful of going into buildings can actually be vaccinated comfortably without stress and anxiety.” Fernandez is the political head for the Klipfontein/Mitchells Plain hotspot and is tasked with reporting to Winde’s provincial cabinet on Covid-19.

Merisca Davids (30) from Brentwood Park, who arrived to get vaccinated at the centre, was anxious but excited. “They call me the vaccine mascot because I’ve been preaching for people to get vaccines,” she said.

“It was something I was hoping and praying for that they open the age group,” she told Daily Maverick. Davids’s group (18-34) was finally able to get vaccinated mid-August.

The drive-through is one of the province’s measures to get residents vaccinated. Others include mobile units going into far-flung and low vaccine uptake vaccination areas. So far, 2,046,973 jabs have been administered in the province.

Mbombo said she is aiming for 70% of residents to be vaccinated by the end of November, which usually marks the start of the holiday summer season. Currently 40% of those eligible had been vaccinated already.

Speaking to Daily Maverick, Winde said the province was coming off a third wave of infections, but a fourth has already been predicted – in  November.

#WesternCape: premier Alan Winde speaks to @dailymaverick about the expected fourth wave- right in the heart of summer season, which is Western Cape’s tourism season. He wanta residents to save summer and jobs by getting vaccinated.

A fourth wave at the start of the peak tourism season could spell disaster for the industry, which has been severely affected by the Covid-19 lockdown.

Mbombo is undertaking a #JabsB4JoL (Jabs before Jol) initiative, going out to nightclubs and other entertainment venues to administer vaccines to the 18-34 age group. On Wednesday, she was at the popular Rands entertainment venue in Khayelitsha, where her team vaccinated 200 people.

Mbombo said she would soon be going to places such as Long Street and Cubana in Green Point to urge young people to get vaccinated.

“Before you socialise, get a jab, vaccination before vacation, you have to jab before jol,” she said. DM