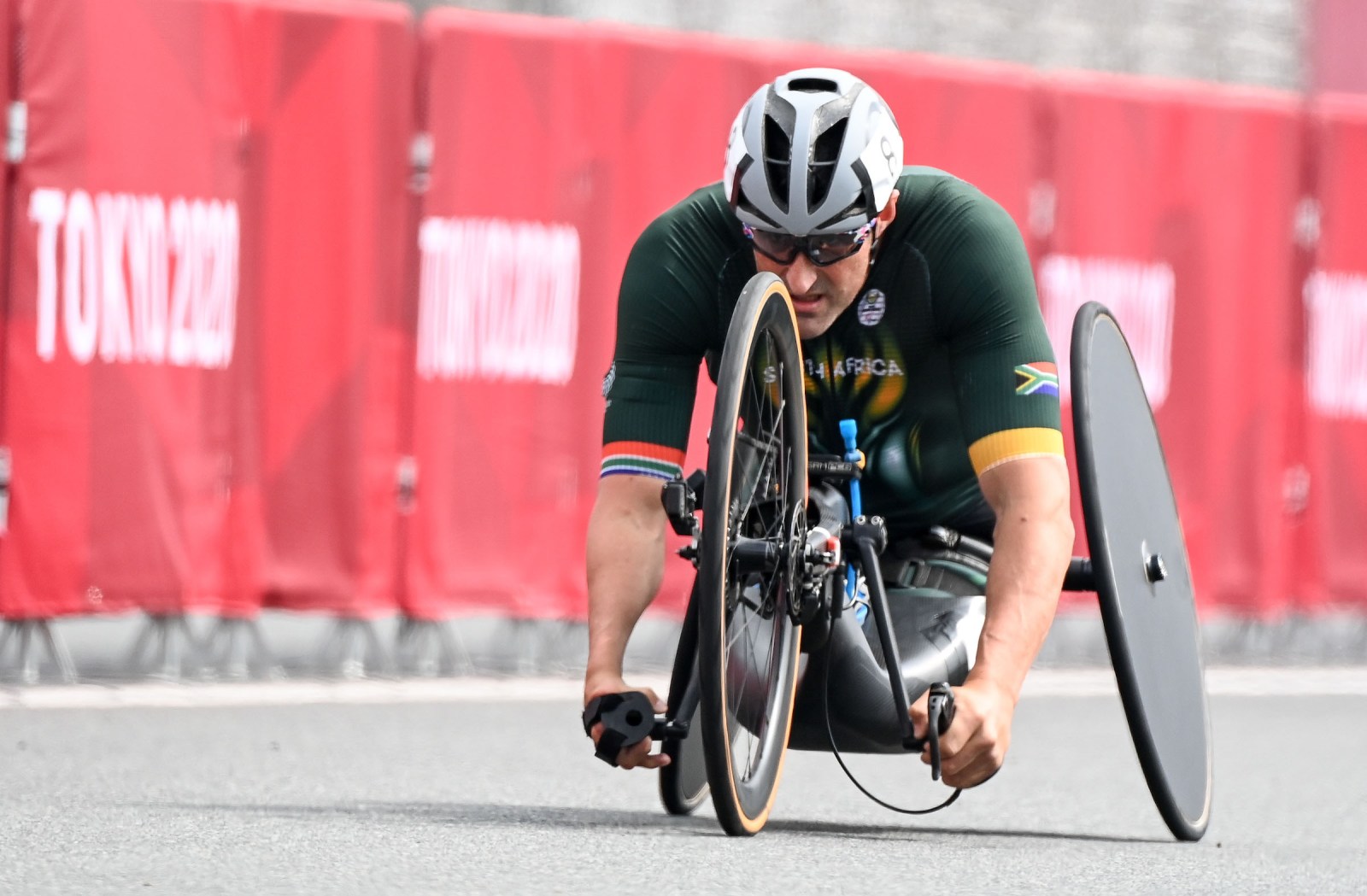 Ernst van Dyk of South Africa during the road cycling event on Day 7 of the Tokyo2020 Paralympic Games at the Fuji International Stadium on August 31, 2021 in Tokyo, Japan. (Photo by Team South Africa)

Veteran Paralympian Ernst van Dyk was unable to defend the gold medal he won in Rio five years ago, during the men’s H5 road cycling race in Tokyo on Wednesday. But he’s not finished yet.

If, and that’s still a big if, this was 48-year-old Van Dyk’s final race of his Paralympic career, perhaps it is fitting that it was at the famous Fuji Speedway, given the South African is a big Formula 1 fan.

The circuit itself was rather controversial before the Japan F1 Grand Prix was switched to Suzuka after 2009, but it had its fair share of great drivers making their way down the longest straight in the sport, before negotiating also some of the tightest corners in motor racing.

However, gloomy weather and low clouds meant we never did get a chance to see the famous Mount Fuji, the stunning backdrop to the track, which might have made the 79.2km course for the H5 racers in the cycling road race a bit mentally tougher than it was.

But the great venue had a great Paralympian in its midst.

For those who have not quite understood how big a name Van Dyk is in the world of parasport, here’s a couple of reminders: he’s a 10-time winner of the Boston Marathon, twice a New York City Marathon winner as well as a two-time Los Angeles Marathon winner.

His dominance wasn’t limited to marathons in the US. He’s a two-time world champion and a two-time Paralympic gold medallist, and came to the Tokyo 2020 Paralympics as the defending champion from Rio 2016. There have also been a slew of second- and third-place finishes in the major events.

When they eventually write down the definitive list of great South African sportspeople, Van Dyk will be on the first page of the contents list.

However, on another grey yet humid day at the Games, Van Dyk was unable to repeat the heroics of Rio when he edged out former F1 driver Alessandrio Zanadi.

He finished his final lap in eighth place, after 2hr 36min 23sec of brutal racing. Gold went to the 26-year-old Dutchman Mitch Valize, who was just six years old when Van Dyk won the first of his 10 Boston Marathons.

The South African will be 51 when the next Paralympics come around in Paris. In the immediate aftermath of the race on Wednesday, Van Dyk  wasn’t prepared to be drawn into any lasting decision on his future.

“I said that it was my last [Paralympics] after Rio and here we sit again today,” Van Dyk said. “It’s hard to say, but one thing I’ve come to realise is that the level of sport in the Paralympic movement is getting higher all the time.

“To work full-time and to try to balance that recovery, intensity and the rest of life will become very difficult for older athletes in the future. So, while I like being fit and I love competing, we will just have to see and see how I can fit things in with my professional life working for Össur.

“The drive and the will are still there. I was well prepared today, it just didn’t work out for me. I always want to give my best and Paris is only three years away. That’s a short cycle in the build-up. I will never say never again, but this is the time to focus on a new season in life.”

Van Dyk himself retired from cycling in 2017 and said he was going to concentrate on his first love, athletics, and the big-city marathons. Here he alluded to that decision, having made this road race perhaps even tougher on a course where there is more climbing over 80km than there is in the entire Cape Town Cycle Tour (formerly Argus).

“It’s been a challenging time because we’ve not raced each other all season, plus I took a three-to-four-year break from competitive cycling,” Van Dyk said.

“It was always going to be hard here. This course is exceptionally hard. It exceeds all the limits that the UCI sets for us for courses. So, the combination of a long time not racing and everyone together on a tough course… it was a serious effort.”

Of the race itself, Van Dyk said: “I felt good, up to around lap three and then I lost some ground through the feeding zone. That forced me to work hard to close the gap again and once I closed it, there was another attack up the hill and I just didn’t have the response. That’s just a lack of race fitness. It was tough out there.”

These paracyclists themselves are as tough as old army boots and another who fits that description is the time-trial gold medallist from 24 hours earlier, Pieter du Preez.

“Supa Piet,” as he is known to his ever-growing legion of fans, officially crossed the finish line on the home straight in seventh position in the H1 class, over 52.8km, in an combined H1-H2 event dominated by the Frenchman Florian Jouanny.

For Du Preez, however, the road race was never on the radar as a medal-contending event. He left it all out on the track in winning gold 24 hours earlier, although he admitted that it still hadn’t sunk in.

“I don’t think it will sink in until I get home, until I’m back with my wife and son. I haven’t looked at social media, but my WhatsApp exploded with messages, it was incredible.

“Today was never a medal race, considering we H1s were in the same race as the H2s and they’ve got so much more function. I went hard the first lap to show I’m still the king after yesterday’s gold, but then decided to let the H2s get on with it and I was going to have a bit of fun.

“Initially we rode together but then the Italian and the Belgian decided they were going for points. But, at the end of the race, I waited before the finish for the Finn [Teppo Polvi] to cross the line ahead of me so that he could unofficially come through second in the H1s, even though we were seventh and eighth overall.

“In 2013, I was the first quad in the world to do the Ironman, but this has been an insane experience. It was the first time I have raced endurance at the Paras and it was amazing that I peaked at the perfect time. I couldn’t be happier,” Du Preez said. DM